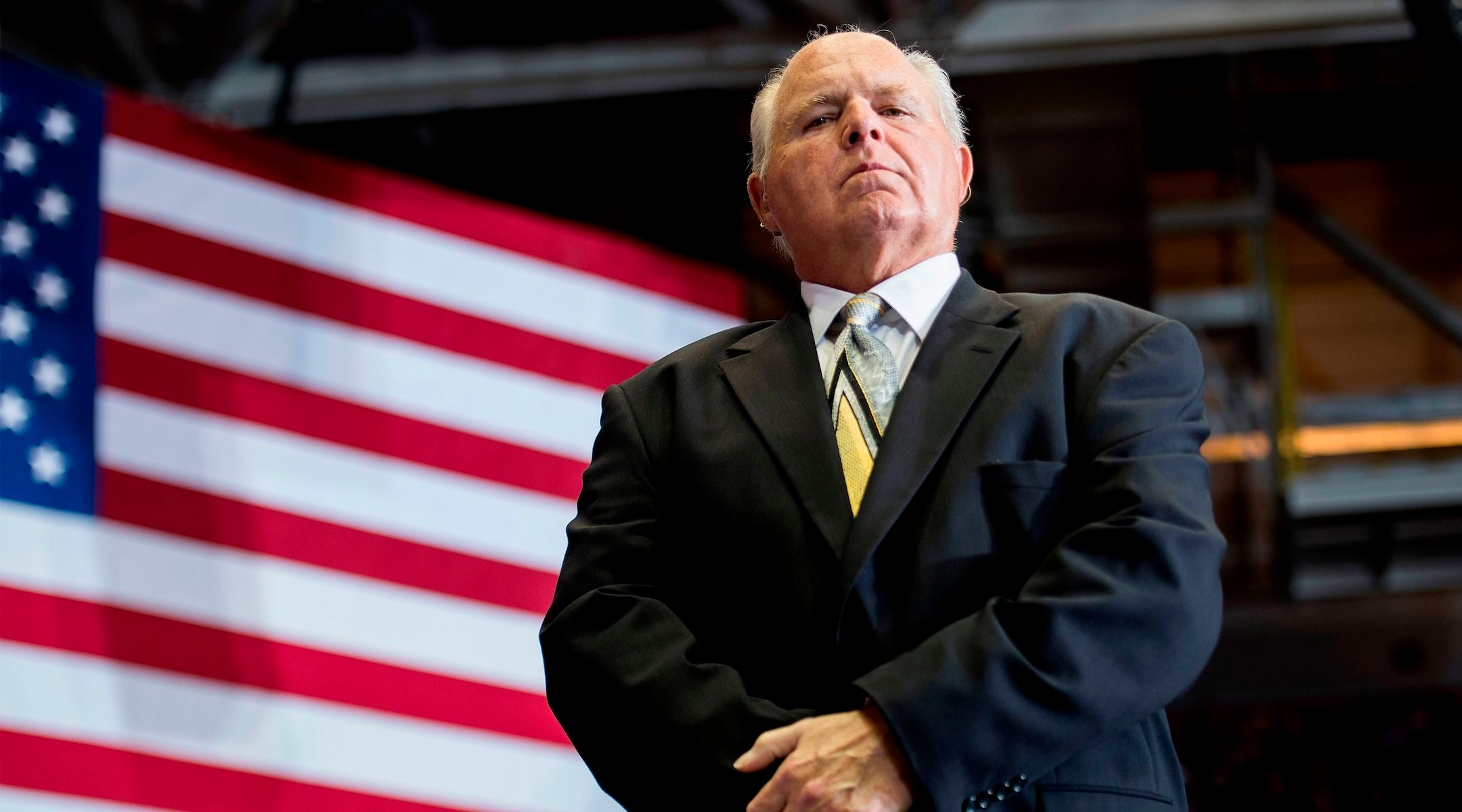 (JTA) — Rush Limbaugh, the conservative talk radio icon who helped polarize American Jewry through both his inflammatory political rhetoric and his unabashed support of Israel, has died.

Limbaugh was 70 when he passed away Wednesday of lung cancer. He had first announced the diagnosis in February 2020.

Starting in 1988, Limbaugh hosted an eponymous radio show through which he trumpeted opinions, vitriolic attacks and ideas that would shape the modern Republican Party. His ardent pro-Israel views helped that strain of policy become commonplace in both parties.

Limbaugh “was a great friend of Israel and he stood by us through thick and thin, always firm, never wavering,” Prime Minister Benjamin Netanyahu said on Twitter.

Limbaugh’s language, especially on issues of race and gender, infuriated liberals. His broader defense of a right-wing style of conservatism delighted some conservatives, though by no means all of them. In his words, a woman who lobbied for the inclusion of birth control in her university health care plan was a “slut.” Environmentalists were “wackos.” He once said the National Football League, whose players are majority Black, “all too often looks like a game between the Bloods and the Crips without any weapons.” He mocked former President Barack Obama as a “magic Negro.”

His rhetoric occasionally strayed into territory that critics decried as anti-Semitic: In 1992, in an appearance at New York’s 92nd Street Y, a Jewish venue, Limbaugh defended his coinage of the term “feminazi” to describe some feminists against charges that it diminished the Holocaust.

“I happen to be pro-life,” he said. “I happen to think life is the most sacrosanct thing on the planet, human life. I think that if we cheapen it, or devalue it in any way, then other societal ills result. I do not think it is wise for a society to kill for convenience sake, and I think that is what abortion has become.”

Limbaugh said “a feminazi is a woman, a feminist, to whom the most important thing in her life is seeing to it that all abortions possible take place.”

He wondered in 2010, when Massachusetts elected a Republican to the Senate, whether the state’s Jews turned on Obama because the president’s economic recovery plan purportedly made life miserable for “bankers.” The conflation of Jews with moneymen drew the ire of the Anti-Defamation League, but a number of conservative Jewish groups defended Limbaugh, citing his pro-Israel record.

“While one may agree or disagree with Mr. Limbaugh’s views on many subjects, his outspoken support for Israel has been eloquent, informed and undeniable,” the groups said in a joint statement.

Limbaugh was not so interested in foreign policy, but was staunchly pro-Israel, seeing the country as an ally against terrorism. In 2001, he urged the George W. Bush administration to allow Israel to crush its enemies, citing America’s own suffering following the 9/11 attacks that year.

“Bush is right about ‘defeating’ the Taliban, al Qaeda and other terrorist networks,” Limbaugh wrote at the time. “It is, therefore, necessary that in the pursuit of real and lasting peace, Israel also be free to destroy its enemies — meaning the terrorists and, yes, their sponsors, who are at war with her, and that she do so before they obtain devastating weapons of mass destruction.”

Those postures helped make Limbaugh friends in the Jewish establishment. He attended the wedding of the daughter of Malcolm Hoenlein, the executive vice chairman of the Conference of Presidents of Major American Jewish Organizations, where he apologized to then-Sen. Hillary Clinton for mocking the looks of her daughter, Chelsea.

Zev Chafets, a Jewish biographer who earned rare access to Limbaugh for his 2010 book, “An Army of One,” said Limbaugh’s outsize influence and his friendliness with Israel set an example for other talk radio conservatives.

“He was very cautious about not saying anything disparaging American Jews as a collective ever,” Chafets said in an interview Wednesday. “It was very important considering the possibilities of anti-Semitism on the right that the biggest and most powerful voice in that community over 30 years was very clearly anything but an anti-Semite.”

Limbaugh’s wariness of alienating Jews was shaped early on in his radio career. He described the blowback he experienced on a panel in 1988.

“I said ‘Jewish lobby’ during the presidential campaign,” he said in video uncovered by BuzzFeed. “There were Jewish groups that wanted me off the air!’

Jewish conservatives said listening to Limbaugh made them aware that there was a world outside their liberal enclaves where they could find agreement with their views. Joel Pollak, an editor at the right-wing news site Breitbart News, said on Twitter that a counselor at a Jewish youth group helped turn him on to Limbaugh.

Binyamin Jolkovsky wrote last year in Mishpacha that in 1991, he decamped home like many other Americans living in Israel while it was under attack by Iraq. Jolkovsky recalled that he and his fellow students at a Brooklyn yeshiva would gather around a boombox at lunch to listen to Limbaugh.

“At a time when the Middle East’s only democracy was under attack, Mr. Limbaugh was one of the few media voices passionately defending the Jewish state we’d just been forced to flee,” he said.

A few years later Jolkovsky founded the right-wing Jewish news site Jewish World Review, and Limbaugh amplified its writings on his radio show, catapulting the site to a position of influence.

“Thanks to Rush, my readership went from Average Joe Americans, both Jewish and gentile, to include Capitol Hill pols and their staff; activists on the left and right; newspaper editors and columnists; cable TV producers and hosts; and clergy of all faiths seeking an uncompromised Torah view on life and the world we live in,” Jolkovsky said.

Limbaugh’s success anticipated the presidency of Donald Trump in its embrace of the homespun conservative orthodoxies of an idealized American past. His first bestselling book in 1992 was called “The Way Things Ought to Be.”

Trump, who last year awarded Limbaugh the Medal of Freedom, lauded his legacy in a statement.

“Rush was a patriot, a defender of liberty, and someone who believed in all of the greatness our country stands for,” Trump said.