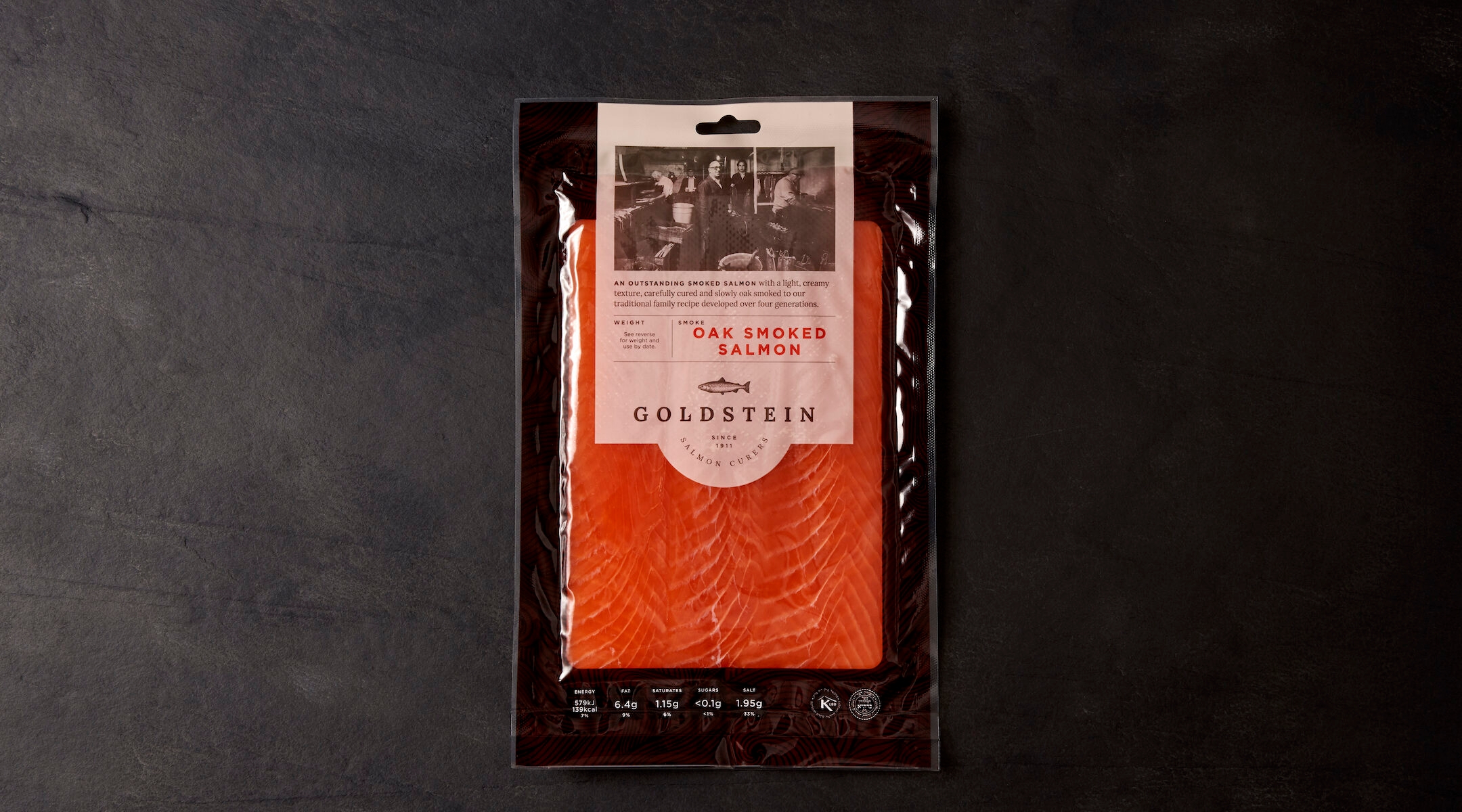 (JTA) — Every Sunday growing up in northwest London, Simon Joseph would arrive home after playing football (American soccer) with friends and feast on toasted bagels with cream cheese and smoked salmon. It was a beloved ritual, one of the only times during the week that the whole family gathered around the table to eat.

The salmon — thinly sliced, mild in flavor and buttery on the tongue — was a delicacy he sorely missed when he moved to New York a little over a decade ago. The local lox, even with the best bagel and schmear, was too salty for his taste.

His wife, Stacey, who grew up frequenting the well-known Bagel Boss and Gold & Meyers shops on Long Island, was skeptical of the supposed supremacy of London-style smoked fish.

“She was always saying to me, ‘Oh you English, you think everything is better over there.’ And I’m like, ‘I promise you, the smoked salmon over there is a thousand times better,’” Simon said.

Stacey was able to decide for herself when she met Simon’s mother for the first time in England.

“Here I am coming over from America, and I’m so nervous,” she said. “I’m sitting in her house, and she comes down with this huge tray of smoked salmon and bridge rolls to serve with tea.”

During a trip to London in February 2020, Simon ran into his family friend Nick Goldstein, the managing director of Goldstein Smoked Salmon. The family-owned operation cured and smoked the salmon Simon grew up eating, and he was eager to bring some back to New York to share with family and friends.

The fish was a hit.

“It was a bit of a eureka moment, although I didn’t realize it at the time,” he said.

When Simon was furloughed from his IT job at the beginning of the pandemic, Stacey suggested they call up Goldstein and set up a proper smoked salmon import and concierge delivery service. In July, the pair created a website for their expanding enterprise, Across the Pond.

They started out doing deliveries locally in Port Washington, the Long Island town they’ve called home since 2010. What began as a side hustle quickly expanded into a full-time operation.

“All of a sudden people were going crazy for it,” Stacey said.

“I think they liked the personal touch, this Brit showing up at their door with a bag of smoked salmon,” Simon added.

Through word of mouth and their Facebook page, the couple started receiving orders from across Nassau County, prompting the Josephs to organize delivery meet-ups in parking lots.

“I delivered to one person in Plainview, and that person gave a bit to their neighbor, and now we deliver to the three houses next to each other,” Simon said. “It’s crazy.” 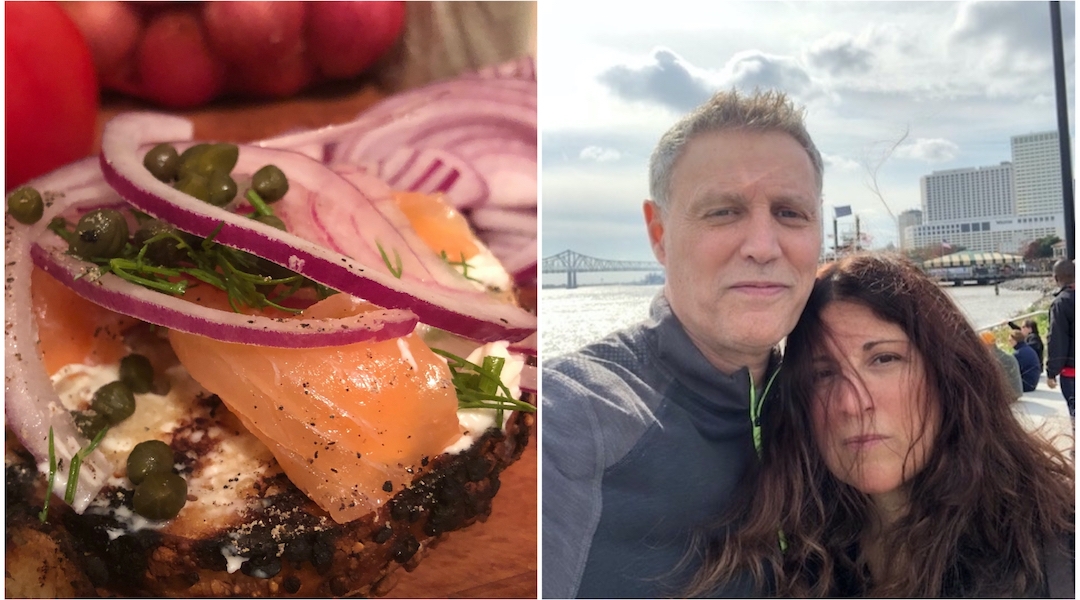 Across the Pond has started to ship out of state to New York expats up and down the East Coast, and even out west to Arizona. Each week, the Josephs receive about a hundred pounds of fish from Goldstein Smoked Salmon.

For Goldstein, Simon’s success is a key example of an international market that has blossomed for his family business during the pandemic.

“My aim is to continue working very closely with him to help him grow his business,” Goldstein said. “His son was one of my closest [childhood] friends, so I’ve known Simon most of my life. As much as it gives me more business, it gives me pleasure seeing him grow the business as well.”

Goldstein, who took the helm of the company in 2018, decided to launch an online store in April after getting requests from customers who were unable to go out and pick up smoked salmon from their favorite local deli or restaurant. Since opening the online store, he has received orders from around the world, gaining customers in places as far as Japan and San Francisco. Goldstein had to work through four iterations of packaging before he found a sustainable wool material that properly insulates the cold packs surrounding the fish in transit.

To keep up with demand, Goldstein is in the process of moving to a new production factory in the East End of London, where his family first started curing and smoking fish over a century ago.

“The census record we have from 1911 shows my great-grandfather was a fish curer, but recently we’ve found evidence dating back to 1891 showing that his father-in-law was a fishmonger,” Goldstein said. “So the family history of being in the fish business actually goes back to the 19th century, which would make our curing company one of the oldest in the U.K. and the world.”

Although Goldstein Smoked Salmon is perhaps the most well-known British kosher smoked salmon producer, the company is part of a rich legacy of Jewish salmon smokers in the United Kingdom. Goldstein’s great-grandfather Wolfe worked alongside Harry Forman, the founder of London-style salmon cure pioneers H. Forman and Son, at the Billingsgate Market, then the largest fish market in the world. 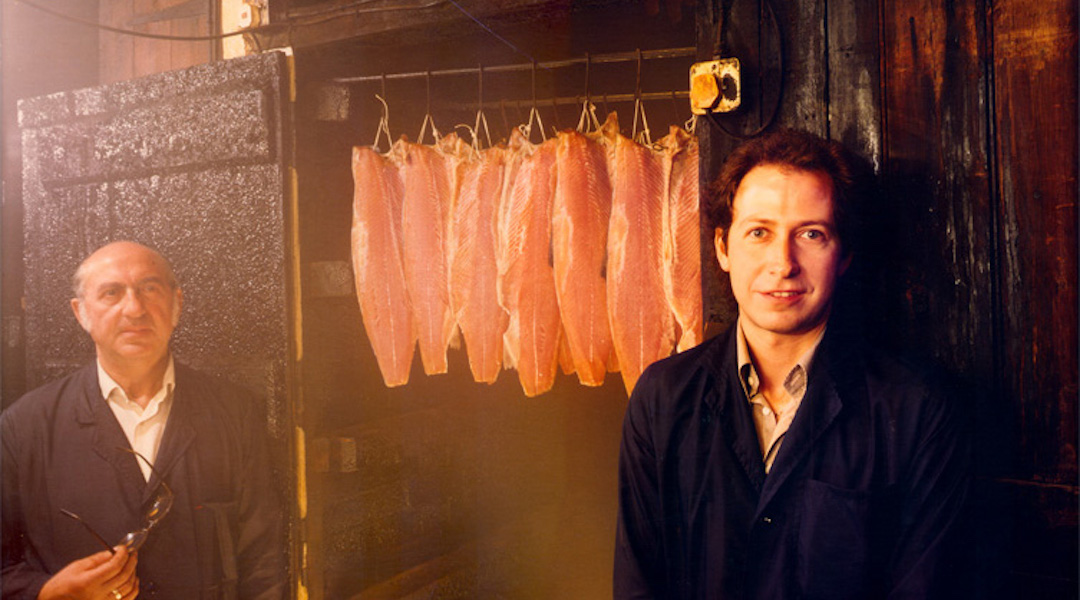 Nick Goldstein’s grandfather Dave, left, and father, Ian, in a photo from earlier days of the family business. (Courtesy of Goldstein Smoked Salmon)

“We still get on very well with the other kosher smokers. It’s very close-knit,” Goldstein said.

The 32-year-old got into the family business somewhat accidentally. Shortly after finishing college in 2008, he started helping out his father in the factory to prepare for a big food safety audit. He stuck around to pitch in for the busy weeks of Rosh Hashanah and Yom Kippur, and the rest is history.

“My father never wanted any of his kids to go into the business,” he said. “It’s hard work, but I love it.”

Ian Goldstein insisted his son learn every job on the factory floor, from filleting the fish to salting, washing, drying and smoking it, a process broken up into some 36 stages. After smoking the fish for 14 hours, Nick Goldstein and his staff leave it to sit for a minimum of one day, allowing all the oils to settle into the fish.

“That’s a big difference with us — a lot of other people won’t give it that time after smoking,” he said. “It’s all about time. We want to have a very mild smoke, a very mild salt, and just allow the fish to speak for itself.”

According to Simon Joseph, the success of Across the Pond speaks to the quality and refinement of Goldstein’s salmon.

“They do what they do,” he said, “and they do it exceptionally well.”

Simon’s delivery service has accomplished no small feat in shifting the tastes of stubborn New York lox loyalists — nearly all the customers that have tried the smoked fish have reordered.