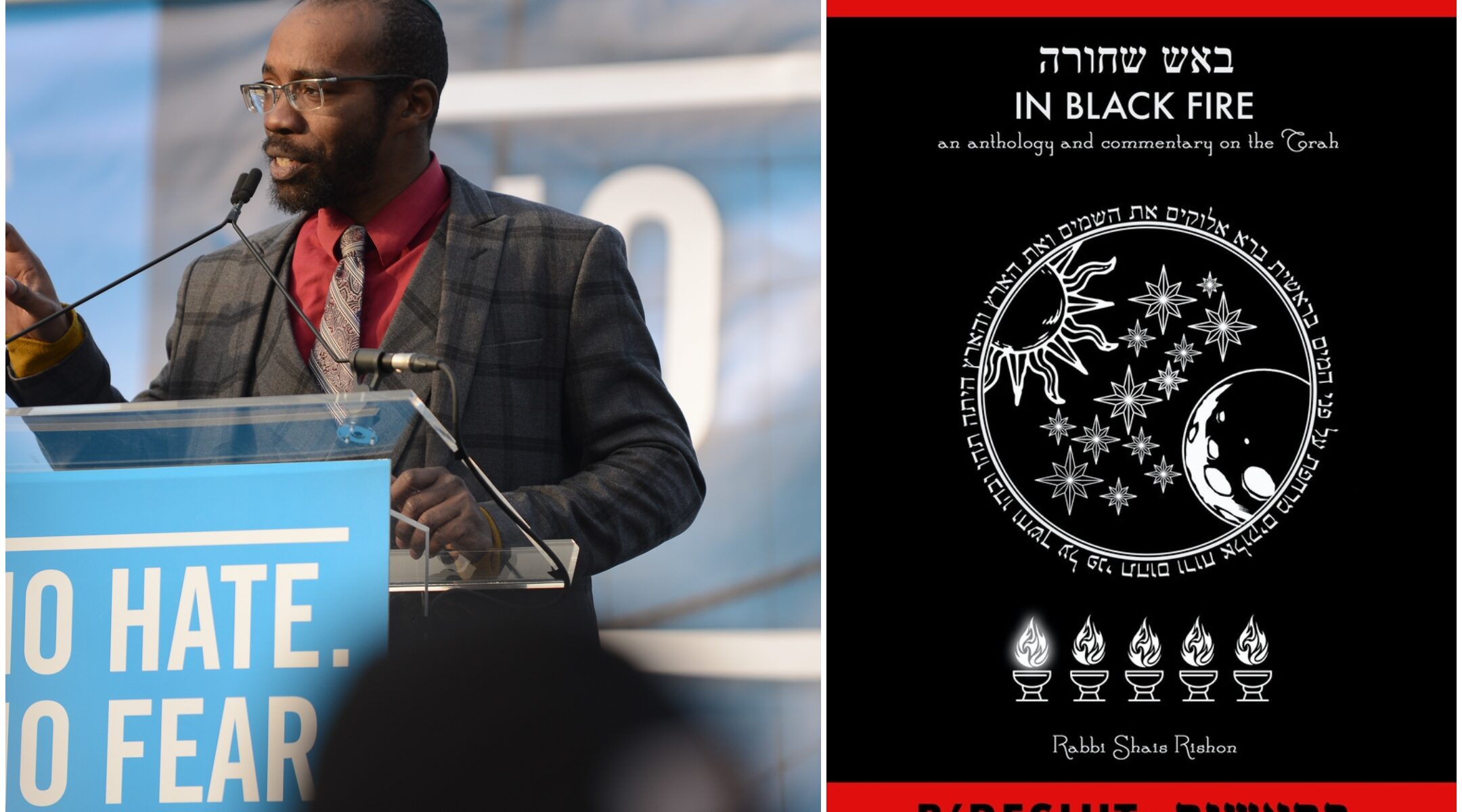 Rabbi Shais Rishon speaks at a rally in New York City, January 2020. His new book will be a Torah commentary. (Gili Getz/Kickstarter)
Advertisement

(JTA) — In the first chapter of Rabbi Shais Rishon’s new Torah commentary, the voices of ancient rabbis mingle with contemporary poets and, at one point, with “Lord of the Rings” director Peter Jackson.

It’s all part of Rishon’s attempt at writing a text “that is firmly traditional/Orthodox, but with a modern and non-myopic lens on race and gender,” as he put it in the description of a Kickstarter campaign that recently raised $11,500, more than twice his goal.

The commentary, titled “In Black Fire,” represents an extension of Rishon’s ongoing efforts to speak up against racism in the Orthodox world. The 39-year-old rabbi frequently tweets on the topic to his more than 12,000 followers, and writes and talks about it in Jewish publications. He is the author of a semiautobiographical novel about a Black, Orthodox rabbi that sheds light on the constant questioning faced by many Jews of color and the co-founder of Tribe Herald, a media site for Jews of color.

Now Rishon, who lives with his family in New City, New York, and writes under the name MaNishtana, is turning his attention to the Jewish texts he has long studied. He believes that the way Jewish texts talk about race – at times perpetuating racist notions about Black people – can be harmful to Jews of color in the community.

“It really frames how we operate in Judaism and who we think belongs in the camp and who doesn’t,” he said.

Growing up, Rishon’s was among the few Black Orthodox families in Brooklyn’s Crown Heights neighborhood, and he recalls being treated differently from his peers.

“We had eyes and saw how we were treated, in synagogues and places or just walking down the street,” Rishon said about his childhood in the heavily Orthodox neighborhood.

“You’d say ‘Shabbat Shalom’ to people and they’d either say nothing or they’d say ‘Thank you.’ You’d go to a kosher supermarket, you’ve got someone in front of you, the cashier says, ‘Shabbat Shalom’ to them and when you come up, ‘Have a good weekend.’”

As a youth, he recalls reading passages that contained racist tropes. Among the examples are a commentary by Rashi that refers to the Egyptians as “black and repulsive people,” and a passage from Maimonides’ “Guide to the Perplexed” that discusses nonbelievers including “the Kushites who live in the south, and those in our country who are like these. I consider these as irrational beings, and not as human beings; they are below mankind, but above monkeys.”

In “In Black Fire,” Rishon aims to push back on such interpretations.

Having a book of Torah commentary written by a Black Orthodox Jew is significant in and of itself. Though American Jewish groups have launched initiatives in recent years to welcome Jews from diverse backgrounds — particularly over the past year amid the country’s racial reckoning following the death of George Floyd — many synagogues and organizations are dominated by white Jews and many Jews of color say they continue to be questioned about their identities in Jewish spaces.

“A Torah commentary written by a Black Orthodox rabbi is imperative to the representation of Black Jews in the rabbinic sphere,” said Rabbi Yonason Perry, a Los Angeles rabbi and teacher who is the co-founder of Kamochah, a group for Black Orthodox Jews.

Though Rishon will explore the topic of race in his as yet unfinished commentary, it won’t be the only focus. The book also will examine gender and challenge standard interpretations of texts in other ways while staying within an Orthodox framework.

“It’s part of a holistic way of looking at the texts that are there,” he said. “Gender is not my particular wheelhouse … but there’s commentary to be made if you have your eyes open. I also wouldn’t say that race is a focus either, but when these issues come up I’d be like, ‘Hey, this is relevant to this topic.’”

Rishon is working on the first part of the commentary, on the Book of Genesis, which he aims to self-publish by Hanukkah. A draft of the chapter on Genesis’ first Torah portion shared with the Jewish Telegraphic Agency offers a window into Rishon’s view of Judaism and the world.

The chapter references the usual crew of ancient and modern Jewish commentators, like Saadia Gaon, Rashi, Ibn Ezra and Rabbi Lord Jonathan Sacks in examining the debate on how literally Jews should take the Torah. But Rishon brings along a cast of unexpected characters, too, finding ways to bring the philosophy of French poet Gerard de Nerval and Jackson’s epic filmmaking into the dialogue.

Though the characters may seem disparate, they blend in a contemporary version of the Talmudic debates where arguments by rabbis from different centuries and locales are pitted against each other in a time and space-defying debate.

Outside of “In Black Fire,” Rishon continues to fight for representation of Black Orthodox Jews in unexpected settings. A self-proclaimed fantasy fan, he recently served as a cultural consultant to Dimension 20, a show by CollegeHumor actor Brennan Lee Mulligan that offers a comedic take on the classic role-playing game Dungeons and Dragons. Rishon helped create the series’ first Black-Jewish character, a rabbi called Mike Salters, who like himself is a young Orthodox rabbi from Crown Heights.

“I think it’s kind of cool and amazing,” Rishon said. “I can’t think of any time I’ve ever seen myself in fantasy, period.”

With his new Torah commentary, Rishon hopes to pave a similar path for others in the Orthodox world who may not feel that their views are represented in the mainstream conversation.