From matzah tortillas to spicy gefilte fish, Passover food in Mexico is a mashup of cultures 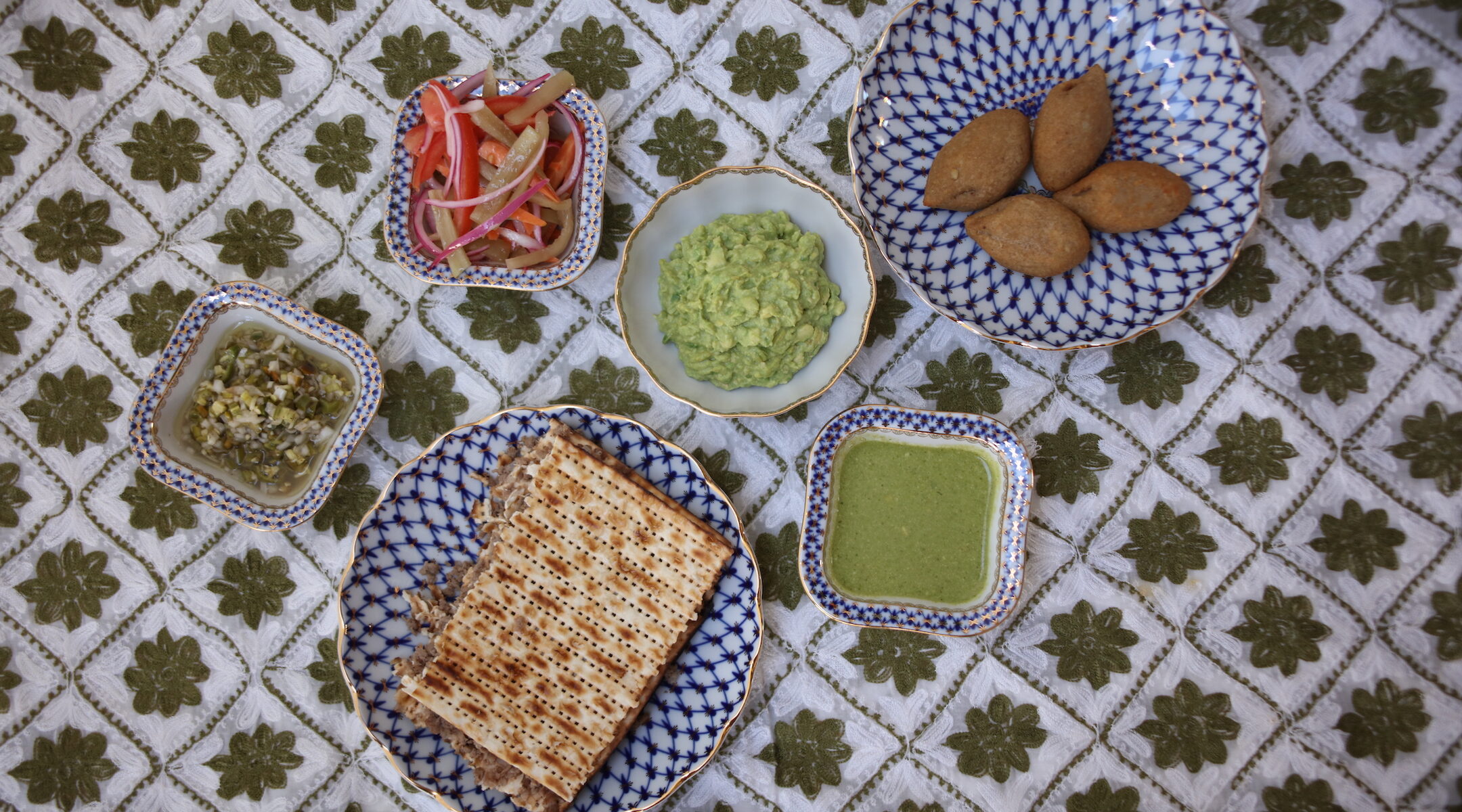 PACHUCA, Mexico (JTA) — Like other Jews around the world, Alegra Smeke turns to traditional foods during Passover. For her that means Syrian dishes with a side of salsa.

Smeke is a chef and former president of a Zionist women’s group who lives in Mexico, which has long been a hub of culinary fusion.

Immigrants, conquering forces and other cultural influxes have left their mark on the country’s diverse cuisine over hundreds of years and in return incorporated local flavors and ingredients into their own cooking. For one prominent example, see tacos al pastor, a national staple, which was created by Lebanese immigrants.

For the country’s Jews, the story is no different. As waves of Jewish immigrants came from different countries to Mexico during the early to mid-20th century, their recipes came with them — and were subsequently influenced by the local cuisine.

For example, a centerpiece of Smeke’s Seder meal is a dish she calls kewash en nogada, a matzah meat pie smothered in walnut sauce, or nogada. It’s a Mexican spin on mina de carne, a Sephardic recipe.

“Our family recipes were handed down for the past 100 years, straight from Syria. So we serve only traditional dishes, but we also have Mexican spices,” Smeke said.

Smeke’s family is not alone in preserving its heritage even after decades in Mexico. Mexico City alone has Jewish immigrants from Europe, Russia, Turkey and the Balkans, and Syria — including two separate groups, one descended from Damascus, the other from Aleppo. Smaller communities are scattered as well throughout the country in cities like Guadalajara, San Miguel de Allende, Tijuana and elsewhere, which include Anusi Jews who have returned to Judaism after tracing their Jewish heritage back to Spain, where they were expelled and persecuted centuries earlier.

“Jewish life in Mexico is like a time capsule,” said Enrique Chmelnik Lubinsky, general director of the Center for Jewish Documentation and Research in Mexico City. “Not only is in-marrying still very high, but also each group has preserved its unique culture.”

The Syrian Jewish community in particular — which is very tight-knit, exclusive and religiously strict — contributes to the uniqueness of Mexican Jewish cuisine.

Some guacamole and eggplants in a balsamic sauce on Alegra Smeke’s table. (Elvira Smeke)

Schuster is Ashkenazi, and her favorite Passover dish is col rellena, or meat-stuffed cabbage, with tamarind sauce, chiles and pine nuts. Other favorites include her grandmother’s matzah stuffing, which is served on the side of chicken or quail, and gefilte fish a la Veracruzana — a Spanish-Mediterranean-inspired fish recipe that originated in the Veracruz region, with spicy red sauce, capers and salty olives. It has become an icon of Ashkenazi-Mexican fusion in recent years.

Jakeline Weintraub of the Mexico City-based kosher catering company SJ Banquetes explains that Jewish cuisine has adapted to modern Mexican life and is becoming more available throughout the country.

“Not only do we have access to more vegetables than we did in our countries of origin, but vegetarianism is more popular. Plus, dietary concerns, like being gluten- or dairy-free, have changed how people eat,” she said.

One common adaptation is matzah meal tortillas, which are eaten throughout Latin America. They can be homemade or purchased where kosher for Passover products are sold, but also in street tortillerias — little shops that sell only handmade tortillas — run by non-Jews in areas with even small Jewish populations. 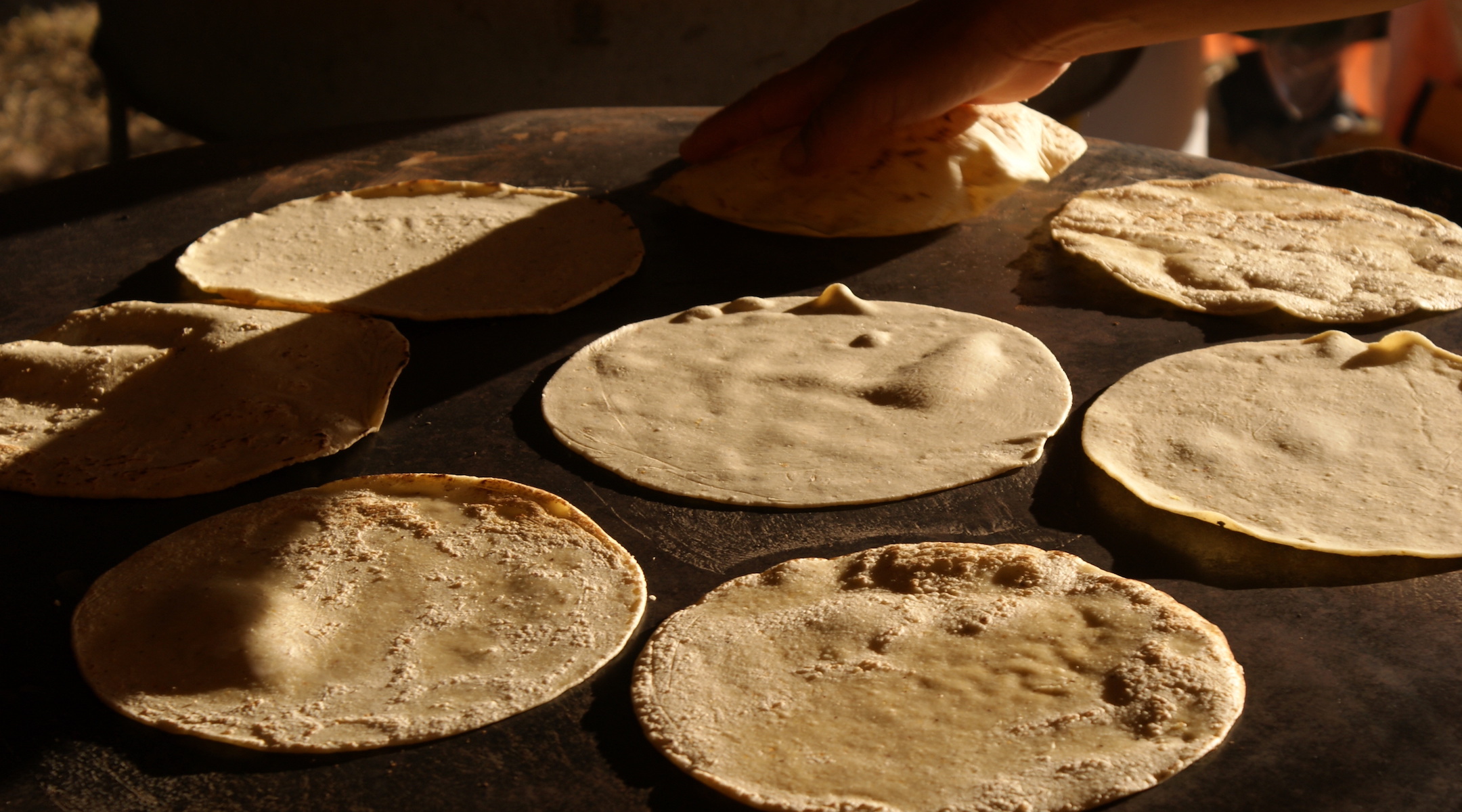 Making tortillas by hand is a big part of Mexican food culture. Many makers have incorporated matzah into their tortilla recipes. (Alberto Rojas Serrano/Getty Images)

Each year many of the country’s Jewish communities sell packaged and fresh goods to their members at food bazaars — fundraisers that feel like small street fairs and last at least a week. The COVID crisis has put that tradition in jeopardy.

But stepping into the online space, a new company, Kosher Click, now offers a marketplace for 100 Mexican kosher vendors, including their own in-house brand. According to representative Salomón Hamui Abadí, some of the most commonly sought-after Passover dishes include mejshi, rice-stuffed zucchini in tamarind sauce; kibbeh, balls of meat mixed with toasted pine nuts and rice (adapted from bulgur wheat); barbacoa, a regional dish of lamb that is wrapped in agave cactus leaves and roasted in an earthen fire pit; and veal.

Chmelnik adds that cooking with serrano chile peppers and tamarind sauce are additional common garnishes. His personal favorites are spicy cholent and anything served with salsa or mole. The chunky salsa (pico de gallo) that’s commonly served in the U.S. with nachos or other chips is just one variety — Mexican salsas are far more substantial and diverse. Likewise, mole comes in a variety of flavors.

When it comes to dessert, Schuster explains that the Syrian community has different styles that are based on different cities of origin. The Shamis, Syrian Jews who originally hail from Damascus, use more preserved fruits, especially apricots, whereas the Halebis, of Aleppo, bake with almond paste. Marzipan, almond flour honey pound cake, and dates and pecans are also common Mexican Jewish desserts — but the more universally eaten chocolate-covered matzah and jelly fruit slices are also included. 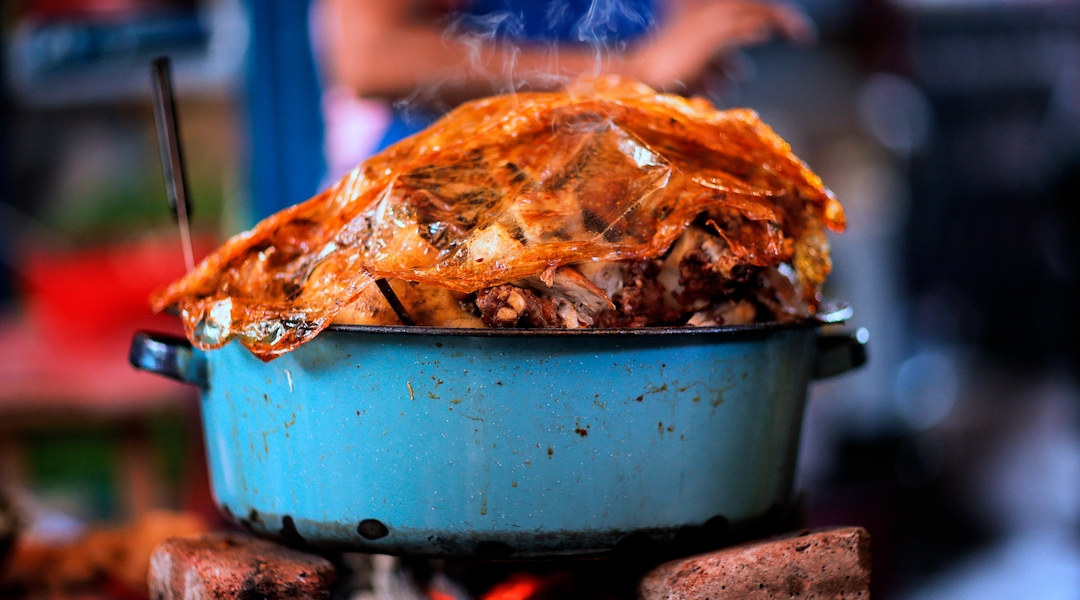 “I bought kosher for Passover tamales and salsa. There were mouth-watering Syrian pastries made of nuts, dried fruits and chocolate rather than the more typically Ashkenazi desserts made with matzah meal and potato flour,” she said.

“I also bought a kosher for Passover almond meal cake that was layered with buttercream and coated in marzipan, out of which a gorgeous rose was sculpted as an edible topper. The pistachio nuts layered with apricot and coated in chocolate were especially exquisite.”

Ultimately, the cuisine is characterized by a tasty mosaic of distinct ingredients and recipes, as opposed to being a blended monoculture of just one variety. But tradition stays at the core.

“The Syrian community has strong roots and our traditions have not changed, yet we have modernized several aspects of how we live,” Smeke said. “We are fortunate to have many families with grandparents or great-grandparents that are still alive who give us the richness of our culture.”

From a historical perspective, the community has forged a common bond and unique culture through its cuisine, Chmelnik said.

“In each Jewish house you find this influence, spicy Mexican flavors combined with Jewish food. We eat mole and all the sauces, chiles, with our traditional meals,” he said. “Yet Jews from Syria still eat kibbeh, while the Ashkenazis still have their gefilte fish, kugel and liver.”