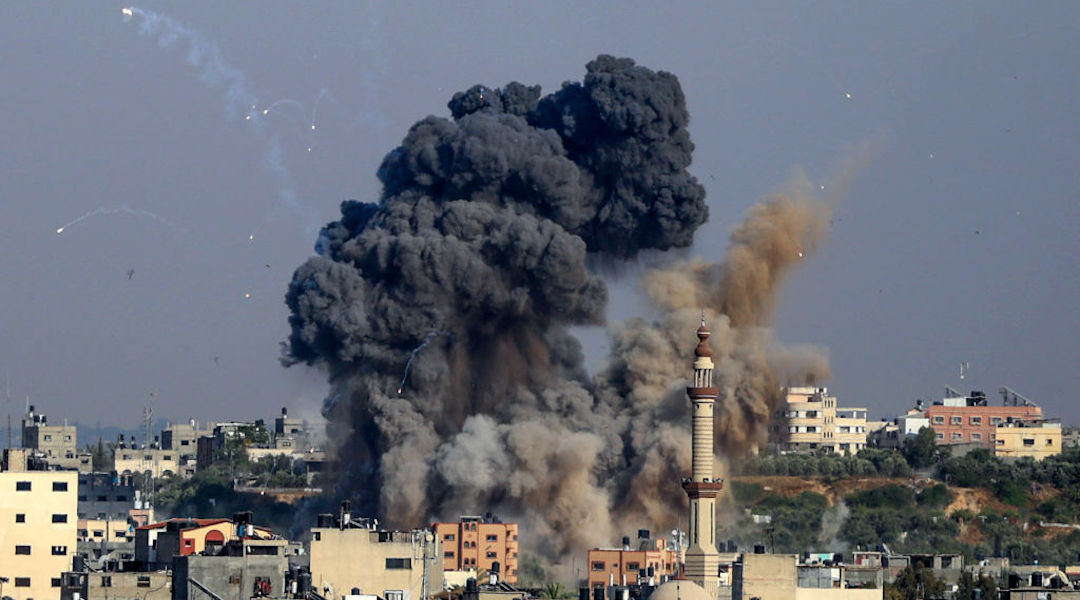 Smoke billows from Israeli air strikes in Gaza City, controlled by the Palestinian Hamas movement, on May 11, 2021. (Photo by Anas Baba/AFP via Getty Images)
Advertisement

(JTA) — Exchanges of fire continued in Israel and Gaza on Wednesday with mounting casualties, while  Arab-Israelis took to the streets across Israel in their largest protests in decades, with some turning violent.

In the central Israeli city of Lod, a state of emergency was declared after Arab protesters burned a synagogue, shops and cars.

Six Israelis and at least 53 Palestinians have died from the ongoing conflict in the Gaza Strip and Israel, according to multiple reports. Two Palestinians were also killed in the West Bank after attempting to carry out separate attacks on Israeli soldiers on Tuesday.

Israel and Hamas, the militant group that controls the Gaza Strip, have been engaging in their most intense fighting since 2014 this week, with attacks escalating. On Wednesday, Israel announced that it had killed several of Hamas’ military and intelligence chiefs in the fighting.

Altogether, Palestinian militants in Gaza have fired more than 1,000 rockets at Israel’s most populated areas, and Israel has conducted hundreds of airstrikes in Gaza.

But on Tuesday night, Israel’s leaders turned their attention to Lod, which has both Arab and Jewish residents, and where a crowd of Arab protesters burned and trashed a synagogue, along with burning shops and cars. Arab-Israeli protests also took place in other cities, including the northern port city of Haifa, where videos circulating on social media showed fires burning as well.

Also in Lod, an Arab Israeli man was shot dead, allegedly by an armed Jewish Israeli man who was placed under arrest.

In an unusual move, Israeli border police were called from the West Bank to Lod to stem the protests. Israeli Prime Minister Benjamin Netanyahu arrived in Lod in the early hours of Wednesday and said Israel “will not tolerate” the unrest.

The six Israeli fatalities have all occurred since Tuesday. A Jewish Israeli man was killed on the Gaza border by an anti-tank missile fired by Hamas. A rocket fired from Gaza killed two Arab Israelis, a father and daughter, outside Lod on Tuesday. Earlier, a Jewish Israeli woman was killed by a rocket attack in Rishon LeTzion, and two others were killed in a strike on the southern city of Ashkelon.

More than 100 rockets were shot at the Tel Aviv area, and traffic was stopped at Ben-Gurion Airport due to the rocket fire.

These are the latest grim figures from an escalating conflict that erupted on Sunday, when Hamas and other militant groups in Gaza began launching rockets into Israel. Hamas said the rocket fire was in retaliation for ongoing unrest in Jerusalem, where hundreds of Palestinians and dozens of Israeli police were injured in clashes at the city’s holy sites and elsewhere.