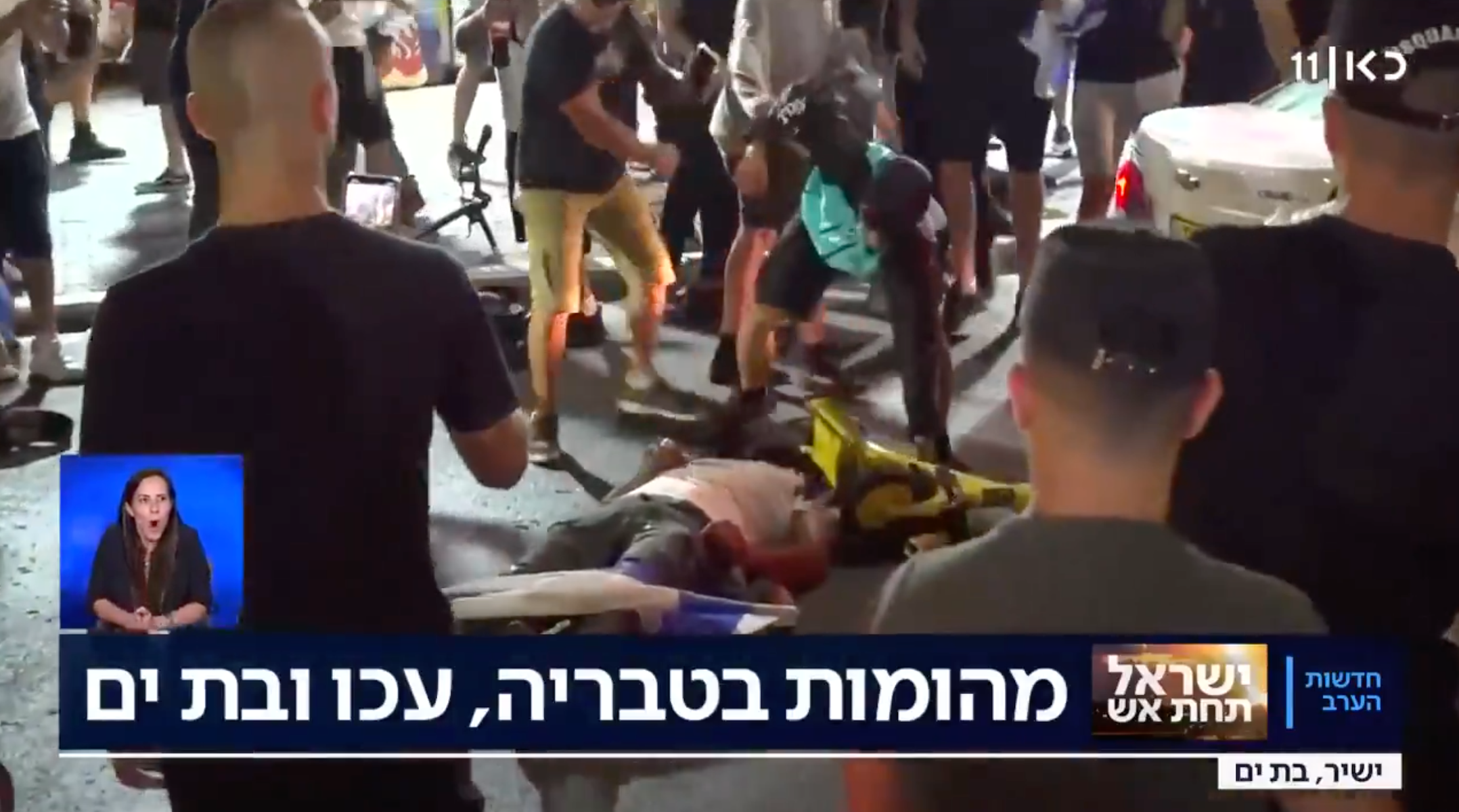 A man beats someone lying prone on the ground in the Israeli city of Bat Yam amid interethnic violence across Israel, May 12, 2021. (Screenshot)
Advertisement

(JTA) — A video of a crowd of Jewish Israelis beating someone presumed to be an Arab in a Tel Aviv suburb on Wednesday night was broadcast live on Israeli TV as the country erupted in violence between Arabs and Jews.

The incident in the coastal city of Bat Yam, caught by a camera operator for Israeli Channel 11, comes amid the deadly rocket fire between Israel and Hamas, the militant group that controls Gaza.

The footage shows the Jewish Israelis surrounding the man and beating him. Later he is seen lying on the ground wearing a motorcycle helmet being kicked and hit before the camera pans away.

Police did not appear to be on the scene. Channel 11 reported that the man was hospitalized.

The attack happened amid a night of unrest across Israel as Hamas fired salvos of rockets at Israel and Israel bombed Gaza. It appears to be the worst interethnic violence within Israel since the onset of the second intifada, a violent Palestinian uprising, more than 20 years ago.

Jewish protesters in Bat Yam, as well as the northern cities of Tiberias and Acre, marched through the streets, and footage circulating on social media captured crowds of men in multiple locations chanting “Death to Arabs” and vandalizing Arab-owned businesses.

A Jewish man in Acre was beaten and an Arab man in the central Israeli city of Lod was shot, according to The Times of Israel.

One night earlier, Arab protesters in several cities took to the streets, with some starting fires. In Lod, the protesters burnt synagogues, shops and cars, and Israeli Prime Minister Benjamin Netanyahu declared a state of emergency.

The unrest, as well as the Israeli-Palestinian conflict, follows weeks of clashes between Palestinian protesters and Israeli police in eastern Jerusalem. Hundreds of Palestinians and dozens of police were injured in the fighting, which twice saw Israeli police raid the Al-Aqsa Mosque compound, which sits on the Temple Mount, a holy site for Jews and Muslims that Muslims refer to as the Noble Sanctuary.

Twice in recent weeks, crowds of far-right Jews have marched on Jerusalem’s Old City, where they clashed with Palestinian crowds. The first Jewish extremist march came after a string of Palestinian attacks on visibly Orthodox Jews.