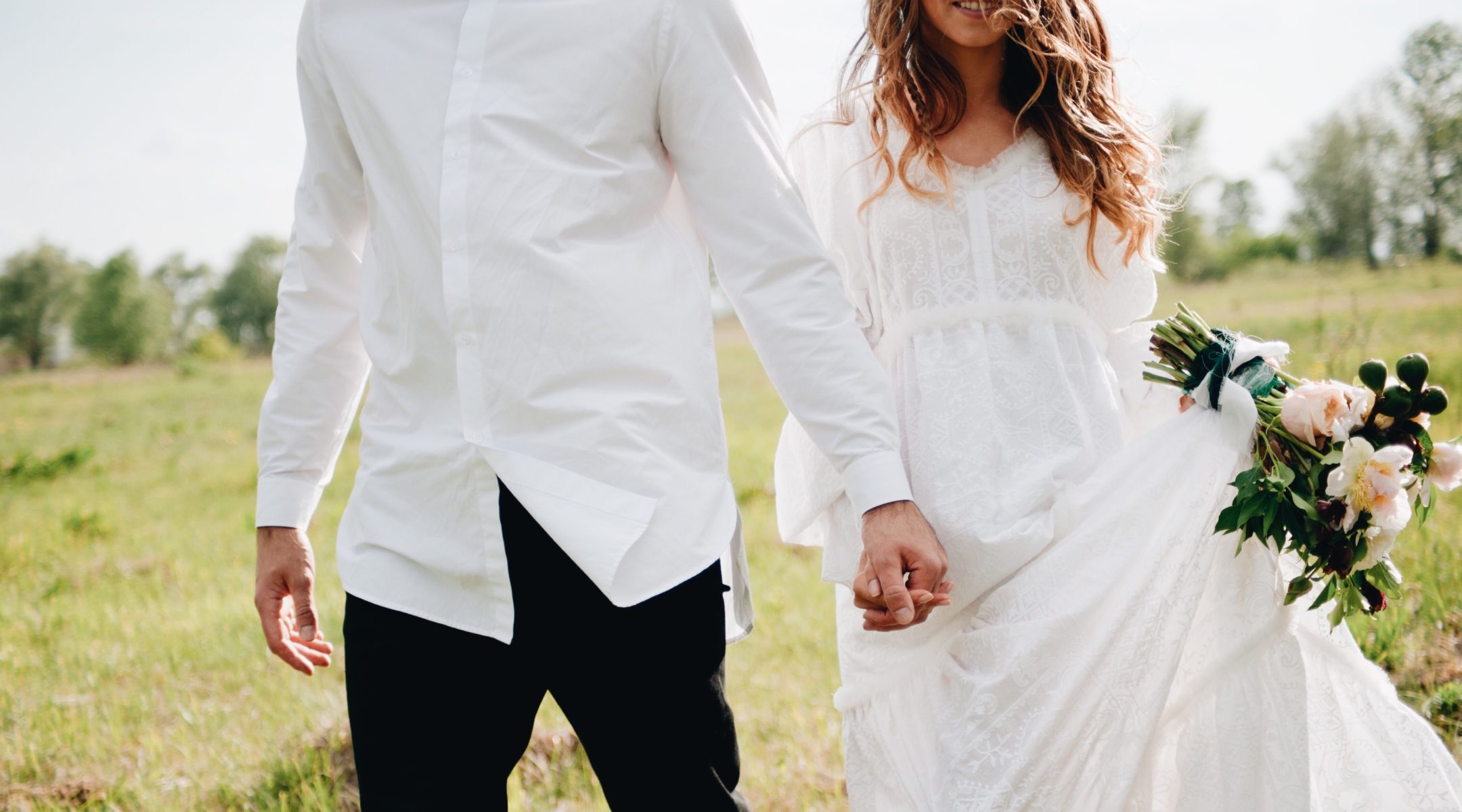 (JTA) — Years ago, Jodi Bromberg met a woman at a Jewish event who said she had to call 65 rabbis before she found one who would officiate at her wedding to her non-Jewish husband.

It was a story Bromberg understood. Bromberg’s wife is Catholic, and earlier in their marriage “it was a struggle,” she said, to find a synagogue that was the right fit for their family.

Sixteen years after getting together with her wife, Bromberg hasn’t left Judaism. Her family is active in their nondenominational Massachusetts synagogue, and Bromberg is the CEO of 18Doors, an organization that helps interfaith families find a place in Jewish life. She knows, though, that there are other families like hers who gave up on trying to fit into a Jewish community.

“The number of times that we hear stories about people being rejected outright because their family has said something untoward, or these microaggressions around being a member of an interfaith couple or an interfaith family that often happen in Jewish life and institutions, that’s where the work has to be done,” Bromberg said. “We’re still here, but there are lots of folks who aren’t because they thought, you know what, it’s not worth it.”

Bromberg and her wife are part of a growing group of interfaith couples who are trying to assert themselves in a community where some view families like theirs as an urgent threat to the continued survival of the American Jewish community. Jewish leaders once assumed that Jews who intermarried, and their children, would be forever lost to the Jewish people. At a 1991 conference of the Jewish federations, intermarriage was compared to the Holocaust.

But intermarried Jews and the scholars who study them say that isn’t the case, that they largely want to remain part of the Jewish world and raise their children in the Jewish community. Now, data from the Pew Research Center’s new study on American Jews backs up that contention.

According to the study, most Jews who have married in the past decade have wed non-Jewish partners. But most current intermarried couples with children are raising those children Jewish, with another 12% raising their kids partly Jewish.

All together, the study found, two-thirds of intermarried couples are raising their kids with some Jewish identity, a rate that seems to have risen over time. In addition, nearly half of adults under 50 with one Jewish parent still identify as Jewish.

For intermarried families and their advocates, all of those numbers suggest that doomsaying about intermarriage is inappropriate — and that efforts to make Jewish communities more inclusive of interfaith families may be paying off.

“Intermarriage and Jewish identity transmission are not mutually exclusive,” said Keren McGinity, a professor who was the inaugural director of the Interfaith Families Jewish Engagement graduate program at Hebrew College in suburban Boston. “Younger adult [children] of intermarried parents by definition would have been born more recently and would have experienced the influences of those who were advocating for a more nuanced, and better, and more accurate understanding of intermarriage.”

That influence has been widely felt outside of Orthodoxy, which strictly forbids intermarriage. Major Jewish institutions have shifted their attitudes, and many now actively reach out to interfaith families. The Reform movement, which represents more than a third of U.S. Jews, accepts intermarried families and its rabbis conduct intermarriages.

While the Reform movement recognizes children born of either a Jewish father or mother as Jewish, the Conservative and Orthodox movements recognize only matrilineal descent, one potential barrier to including interfaith families.

But the Conservative movement, home to 17% of American Jews, has recently taken steps to be more inclusive, allowing non-Jews to be synagogue members and, in 2018, allowing its rabbis to attend interfaith weddings, though they still can’t officiate at them. Most recently it hired McGinity as its interfaith specialist, tasked with helping rabbis and congregations be more welcoming to intermarried couples.

“When a Jew marries someone of another faith or cultural background, their identity can be cast into high relief,” McGinity said. Being the only Jewish parent in a relationship, she said, gives them “the potential to strengthen their own identity.”

In a sign of the changing times, two years ago, a range of American and Israeli leaders criticized Israel’s education minister for repeating the intermarriage-Holocaust comparison.

The Pew study did find differences in the Jewish identities of children raised by intermarried parents compared to those of children whose parents are both Jewish. Couples in which both spouses were Jewish, the survey found, raise their children Jewish at higher rates than intermarried couples, and more often with the markers that Pew associates with religious affinity.

Bromberg said the relatively low numbers of kids of intermarriage raised “Jewish by religion” speaks to how unwelcoming Jewish religious spaces have historically been.

But Samira Mehta, who studies interfaith families, said the causality works in the other direction: The Jews who intermarry were less likely to practice religion to begin with.

“For a lot of people, part of the reason that it doesn’t seem like a big deal to marry across religious lines is because you’re not somebody who really wants to necessarily orient your life around that kind of religious belonging,” said Mehta, the author of “Beyond Chrismukkah: The Christian-Jewish Interfaith Family in the United States.” “I don’t think the problem is interfaith couples. I think the question is whether synagogues and, quite frankly, churches are doing a good job of helping people understand why it is that they are relevant in contemporary society.”

At the same time, she said, younger Jewish adults who marry non-Jews or those are from interfaith families may be more eager to identify as Jewish than previous generations because Jewishness allows them to feel distinct in the United States. Older adults, by contrast, were raised to believe in the United States as a “melting pot” that prized assimilation.

“For people over 50, really the goal in a lot of ways was to assimilate,” Mehta said. “But for those of us under 50, who were raised in the era of identity politics and multiculturalism, this gave you a way of being an ethnic American.”

Some intermarried Jews who are raising Jewish kids still celebrate Christian holidays in some form, like family Christmas dinners or Easter egg hunts.

“I think there are a lot of people who identify as just Jewish but who have traditions around Christmas or other holidays,” said Rabbi Denise Handlarski, a secular humanist rabbi in Toronto who is intermarried and raising her children Jewish. “That doesn’t feel like a conflict.”

Mehta said intermarried couples who celebrate Christmas and Easter may feel that it doesn’t get in the way of raising Jewish kids because those holidays are so ingrained in American culture. In other words, reading Charles Dickens’ “A Christmas Carol” in December may be seen as a normal American thing to do as opposed to an active expression of Christian identity.

“Having a seder feels like participating in Judaism,” she said. “If you’re doing Christmas with Dickens and not with the Gospel of Luke, you’re likely to say, ‘We’re not teaching our kids Christianity.'”

Regardless of what intermarried families do in December, the survey numbers show that the right approach is to actively involve them in Jewish community, said Len Saxe, director of Brandeis University’s Cohen Center for Modern Jewish Studies. The dire predictions, he said, have not been borne out.

“It hasn’t been the end of Jewish life,” said Saxe, who advised on the Pew study. “And what we see is that when we provide people with meaningful experiences, with education and so on, they engage in Judaism. They raise Jewish children.”