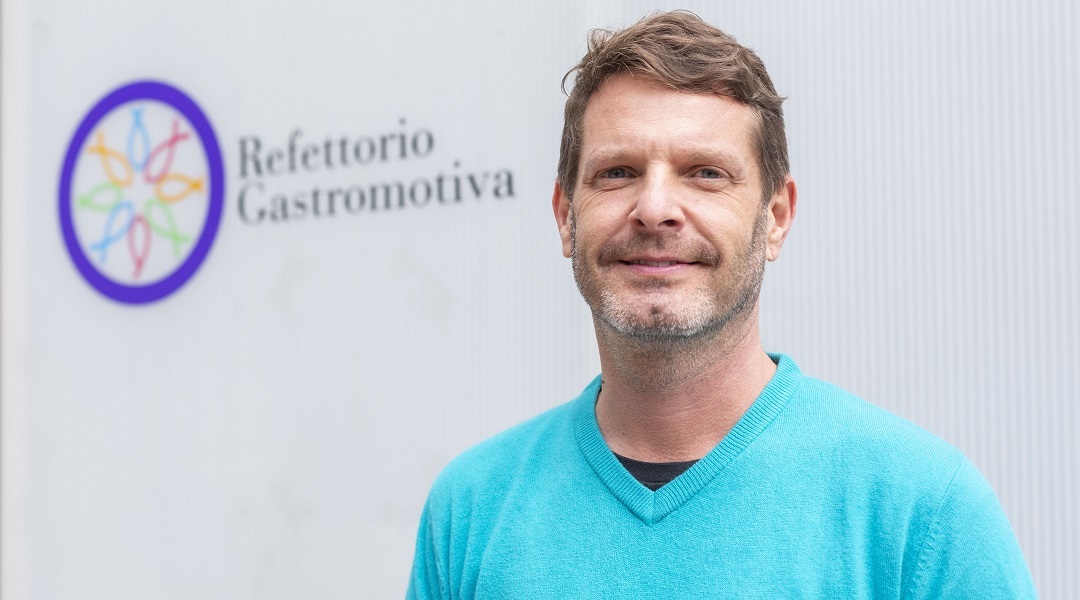 At 18, after growing up in the southern Brazilian city of Curitiba, he traveled to the Hatzerim kibbutz to live among native Israelis and Jews from all over the world.

“I discovered myself and then I hit the world. Israel was my freedom,” he said. “I had there the first vision that there was a bigger world and that I could search for my story, whatever it was. What was supposed to be a one-year trip abroad turned into seven.”

Between the ages of 18 and 25, he visited Thailand, China, Vietnam, India, England and Canada. He took his first cooking lesson in Thailand and discovered the ritual side of cooking in India. When he hit Toronto and started to work in the food delivery industry, he became inspired to become a chef, so he moved back to Brazil to attend a college of gastronomy in Sao Paulo.

Then in 2004, he was invited to design a kitchen project inside the Jaguare favela — one of Brazil’s many low-income shantytowns plagued with urban violence and drug trafficking, and historically neglected by the government. He had never been inside one before.

“When I stepped into that kitchen, I saw a new world,” Hertz said. “I was inspired to do something to contribute to the reduction of violence and to share my knowledge with the young people there, who at many times felt lost, with no relation of belonging to the space. It became my life project, my mission.”

The next year, with the help of his apprentice Urideia Costa, he decided to create a school focused on training upcoming chefs from low-income areas, which are often plagued by malnutrition and food shortages. His organization called Gastromotiva came out of the oven.

Gastromotiva runs a network of what they call Solidarity Kitchens, of which there are now 55 across Brazil and three in Mexico. One of them operates out of Hertz’s favorite synagogue in Sao Paulo, Comunidade Shalom. After Hertz spoke there last year, the synagogue decided to become a Solidarity Kitchen and now prepares 1,250 meals per month for homeless and vulnerable people in the area.

Hertz, now 46, later co-founded the Social Gastronomy movement, a network of local communities that work “to address social inequality, improve nutrition, and engage people to leverage their skills for social good” and address “all levels of the food production chain—from sowing and harvesting crops to preparing meals, to utilizing food waste.” He introduced it at the prestigious World Economic Forum in Davos, Switzerland, in January 2018.

For his work on Gastromotiva, he won the 2019 Charles Bronfman Prize, which honors innovative work grounded in Jewish values and comes with $100,000. He has also worked closely with the United Nations’ World Food Program, which won last year’s Nobel Peace Prize. They have been partners in many efforts to combat global hunger, with the latest focused on alleviating the hunger crisis brought on by the COVID-19 pandemic. By the end of 2021, the number of Solidarity Kitchens will nearly double to 108, including some in other countries in Latin America.

“Combating hunger and food waste are global challenges that require joint action. Collaborating with each other, we multiply our impact on the world. I wonder how to feed humanity with humanity,” he told the Brazilian magazine Veja last year. 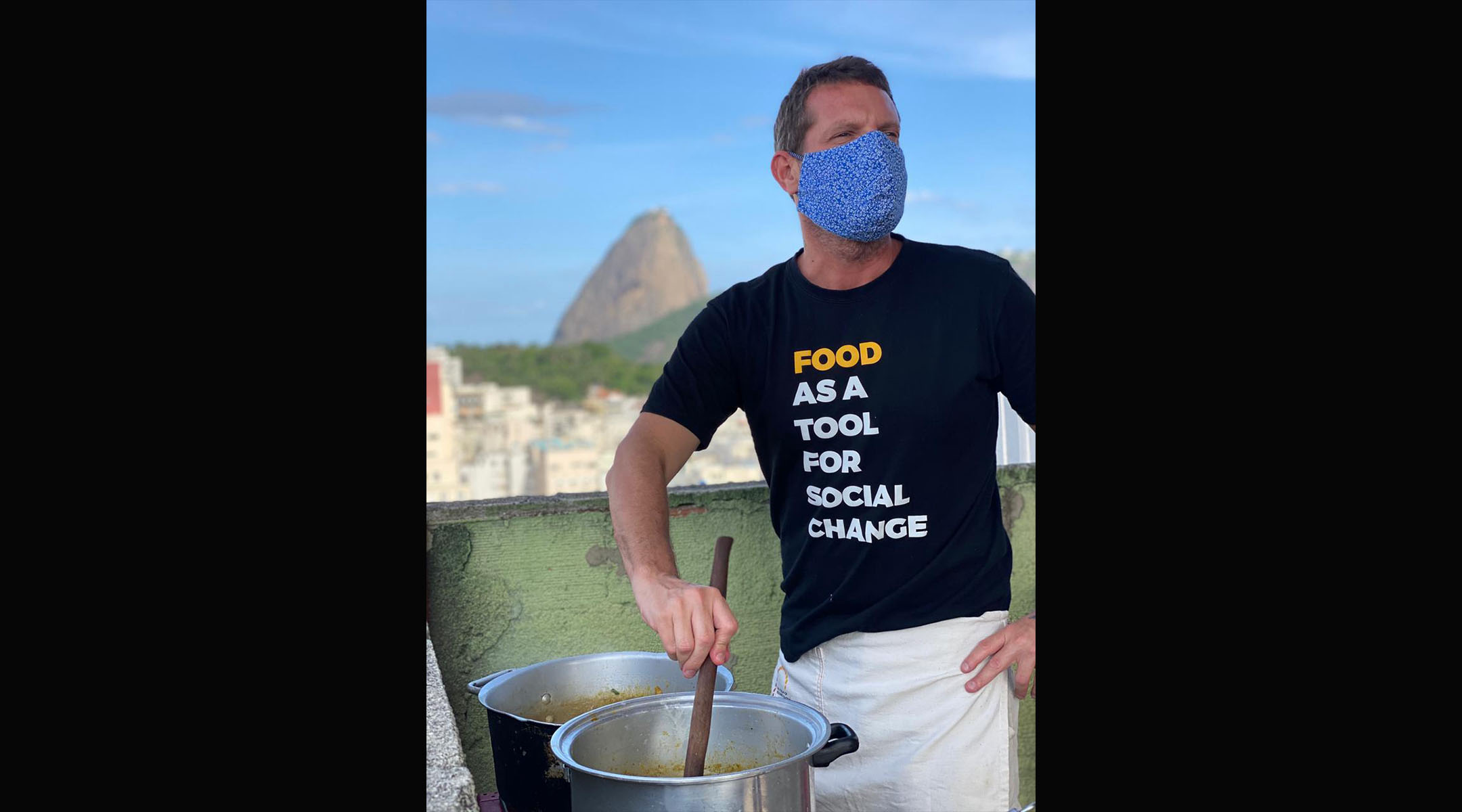 David Hertz cooks at one of his Solidarity Kitchens, in Rio de Janeiro, Oct. 2019. (Courtesy of Hertz)

These days Hertz talks about promoting the core Jewish values of feeding the hungry and creating community – but he went through a long search for the recipe to his own Jewishness. He initially felt like he didn’t belong to his own community at all because he is gay.

“My family was very conservative, and I was more likely to follow the same course,” he told the Jewish Telegraphic Agency. “I attended a Jewish day school, was a member of the Habonim Dror Zionist youth movement, and was engaged with all the Jewish folklore.

“However, I have always felt like a fish out of water. When I came out as gay [at 25], I felt very uncomfortable. I was actually part of the whole, but I never could be what I wanted to. I always felt like an outsider.”

“My mother was one of the first converts by Rabbi Henry Sobel,” Hertz said in a reference to Brazil’s iconic Reform spiritual leader and human rights activist who led Latin America’s largest congregation for decades until his 2019 death.

Hertz’s mother died when he was a year old, and his father took over his Jewish education.

“I struggled a lot to accept the Jewishness inside of me,” Hertz said. “I always thought that I lived a deep-rooted prejudice for being gay.”

In his late teens, Hertz discovered Rabbi Nilton Bonder’s “Our Immoral Soul: A Manifesto of Spiritual Disobedience.” Bonder is one of Brazil’s most influential Jewish figures. He leads Rio’s only Conservative synagogue, the 400-family Congregacao Judaica do Brasil, and is a best-selling author of tens of books in Latin America, many of which are also translated worldwide.

Despite the popular religious belief that obedience to an established moral order brings the greatest rewards, Bonder argues that “the human spirit is nourished by the impulse to betray and transgress the ways of the past.” That idea connected deeply with Hertz.

“Rabbi Bonder has been a big inspiration to me for many years,” Hertz said.

After returning to Brazil after backpacking across the world and learning to understand his own religious beliefs, it was at Comunidade Shalom, a congregation that was born as Reform and later affiliated with the Conservative movement, where Hertz found his fit.

“It brought me a new layer of Jewish identity but interpreted by myself,” he said. “I have gained a sense of belonging.”

When Brazil became the second country after the U.S. to register more than 50,000 deaths from COVID-19 last June, Hertz interviewed Bonder on a live Instagram video, where they found Jewish context in the midst of the crisis.

“During these tough times of the pandemic, I don’t agree with the idea that we’re all in the same storm but each one on a different boat. We’re all on the same ship, but some on the upper cabins with sea view, others in the lower ones. It’s a model that resembles Noah’s Ark,” Bonder said. “We must have more solidarity. We can now perceive that there is a connection between all of us. It’s the first time in history that everyone is facing a situation that we have no place to run to. Our freedom and everything today depend on things that are collective.”

“Jews usually look after Jews,” he said, “and I think we can always do much more by going beyond.”