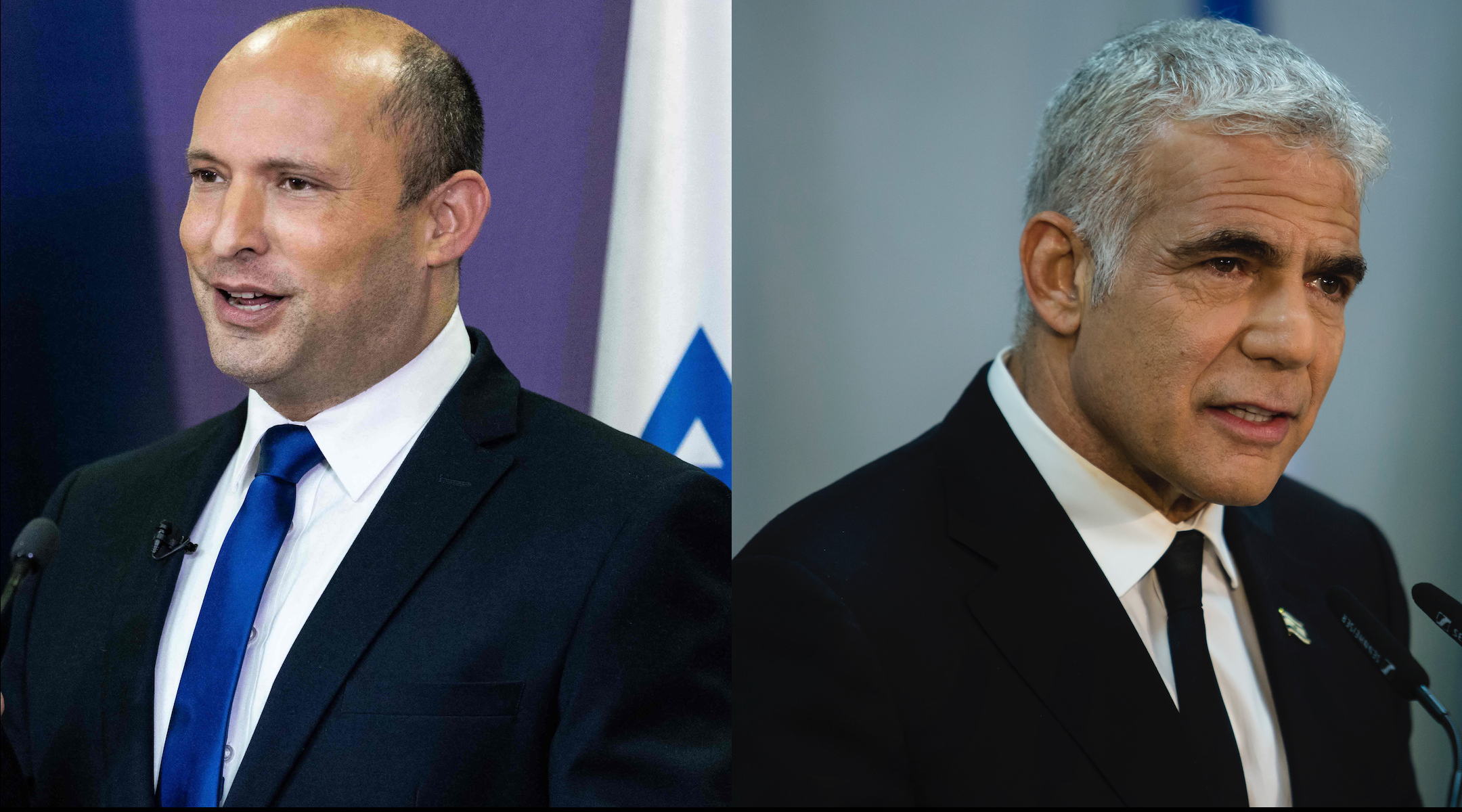 Naftali Bennett, left, will be Israel's next prime minister, to be succeeded by Yair Lapid, right. (Yonatan Sindel/AFP via Getty Images and Amir Levy/Getty Images)
Advertisement

(JTA) — After 12 straight years as Israel’s prime minister, Benjamin Netanyahu is losing power — and the government that’s about to replace him is remarkable in its own right.

Netanyahu’s ouster is a huge deal on its own. Over the past decade-plus, as the country’s longest-serving leader, he has become nearly synonymous with Israel — shaping its foreign and domestic policy as well as its international image, and personally guiding its relationship with the United States.

Over the past two years, his desire to hold onto power — even as he stands trial on corruption charges — along with his opponents’ desire to oust him, have driven Israel’s political system into crisis. He has become so personally polarizing that a range of ideological allies turned against him — and are on the verge of replacing him.

Now, Netanyahu’s opponents have announced that they have succeeded in defeating him. And when they get sworn in later this month, unless Netanyahu somehow manages to scuttle that, the government they form will itself break boundaries. It will be an unprecedented alliance of political right and left, Jews and Arabs, all dedicated to one goal: ending the Netanyahu era. At the same time, there are ways that, even under new leadership, Israel is unlikely to change.

Here’s what you need to know about Israel’s incoming government.

Netanyahu is losing power: how we got here.

Israel has been trying and failing to elect a stable government for more than two years. And Netanyahu has come close to losing power before. But this time, it looks like it’s actually happening.

A little background: Netanyahu seemed to have won Israel’s 2019 election, but his former partners deserted him and he couldn’t form a coalition. So Israel held another election. Then it held another. Then yet another. Each time, neither Netanyahu nor his opponents gained a majority. There was a brief interlude where the rivals came together to form a coalition to address the pandemic, but that fell apart pretty quickly.

This time around, if Netanyahu’s opponents weren’t able to team up, Israel would have held a fifth election. Almost no one wanted that to happen, so Netanyahu’s rivals decided to put aside their vast differences and form a coalition with one goal: to get rid of him.

The incoming coalition is a testament to how much Israeli politics has become about Netanyahu himself. Three of the parties in the incoming government largely agree with Netanyahu on policy. But they dislike him so much that they’d rather team up with the Israeli left than give him another term in office.

This amounts to a political reset for the Jewish state. To have any real memory of Israel before Netanyahu’s current tenure, you’d have to have been born well before the iPhone was released. For more than a decade, Netanyahu’s personality and politics have dominated Israel. No longer. 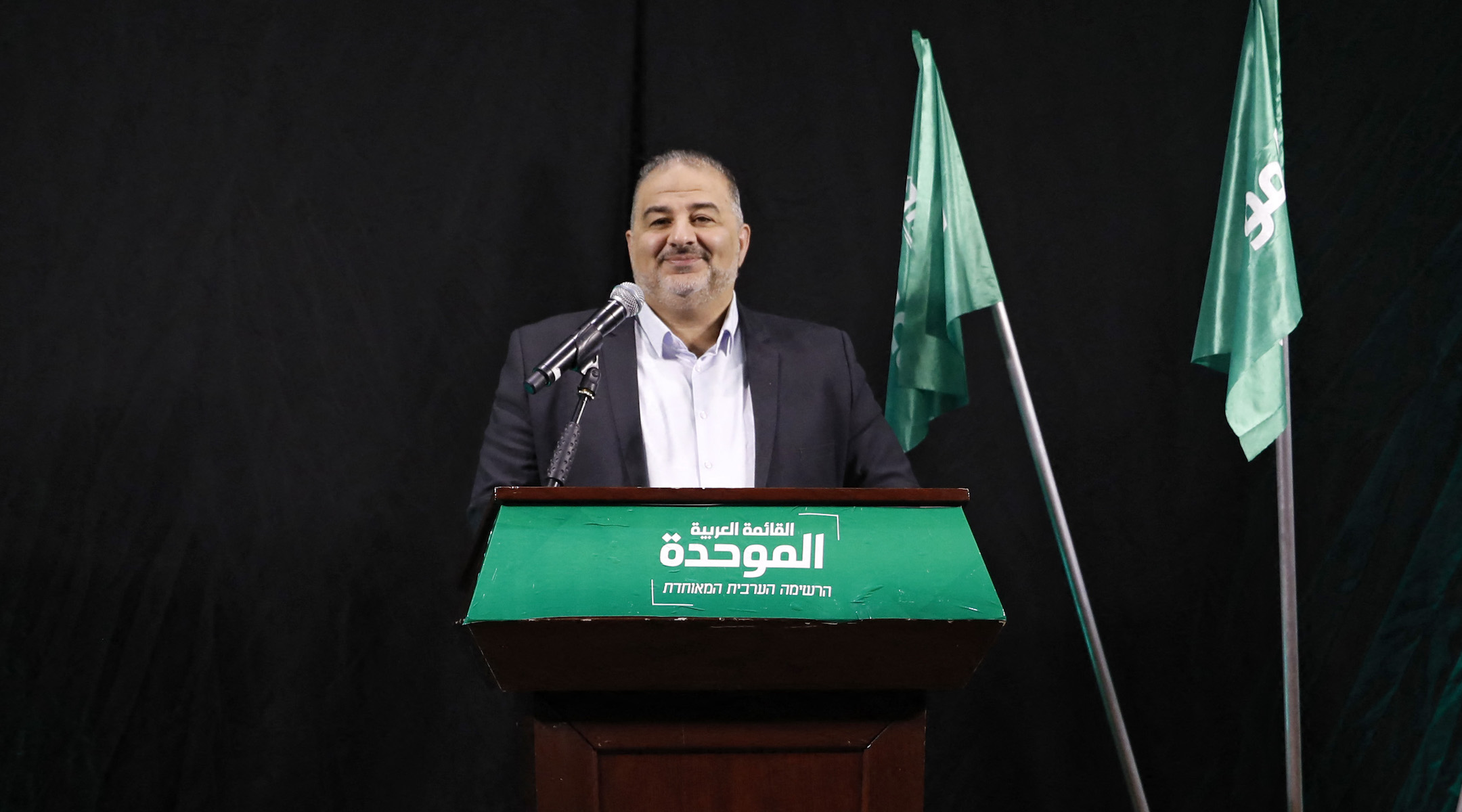 This is the first coalition in Israeli history to include an Arab-Israeli party.

There have been left-right coalitions in Israel before. But to reach a majority of Israel’s 120-seat parliament, the Knesset, the anti-Netanyahu alliance is doing something truly unprecedented in Israeli history: It is inviting an independent Arab-Israeli party to join the governing coalition.

That hasn’t happened before for a few reasons: Although Arabs make up 20% of Israel’s citizenry, Israel’s largest political parties, on both the left and right, didn’t see Arab parties as legitimate political partners in a Jewish state. Arab parties, likewise, did not want to be seen as granting legitimacy to Jewish governments. And often, the policy differences between Jewish and Arab parties were vast.

But seven decades after Israel was founded, things have changed. Arab leaders have been more vocal about demanding a say in the way their country is governed. And the ongoing stalemate has given Arab parties a chance to be kingmaker.

Faced with the prospect of losing power last year, Netanyahu (who once attacked the very idea of Arab citizens voting in elections) said he’d be willing to partner with Raam, an Islamist Arab party. That legitimized the idea of including Arabs in Israeli coalitions, and now, Raam is set to join Netanyahu’s rivals, and give them the slimmest of majorities.

Arabs have almost always been represented in Israel’s parliament. But now, for the first time ever, an Arab party will have an active say in Israel’s government.

It is a narrow — and unwieldy — coalition of right and left.

The coalition is unified on the goal of ousting Netanyahu, but it’s divided on pretty much everything else. It will contain eight different political parties, an unusually large number even in Israel’s famously tumultuous politics. And it will have the smallest possible majority in parliament, so to get anything done, every single member will have to agree.

To reconcile the different factions, the coalition will have two prime ministers: Naftali Bennett, who heads the right-wing Yamina party, will serve for two years and change. Then Yair Lapid, the leader of the centrist Yesh Atid party, will take over for about the same amount of time.

Both of them head historically small parties. Yesh Atid only has 17 seats (as opposed to the 30 held by Netanyahu’s Likud party). Yamina will have a paltry six seats. But this unorthodox arrangement is the only way to keep everyone in the coalition happy.

It’s unclear how long this coalition will last. Previous ones that were more ideologically coherent have fallen apart quickly. 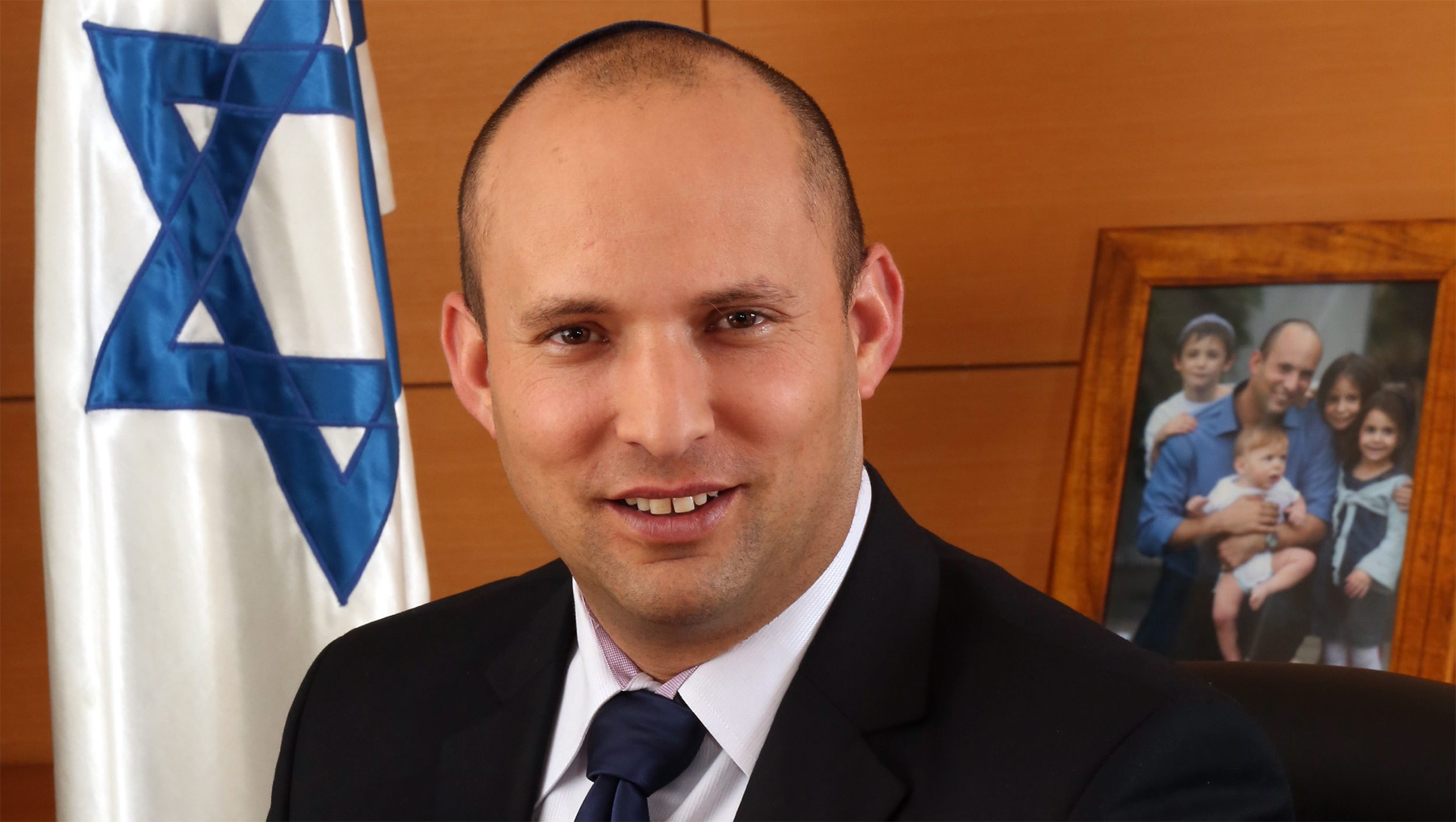 Naftali Bennett joined his New Right party with Likud to form a single Knesset faction. (Spokesperson of The Ministry of Economy)

The next prime minister, Naftali Bennett, will be the first religious Zionist to lead Israel.

But no matter how long he serves, Naftali Bennett will earn the distinction of being the politician who replaced Netanyahu. He’s a staunch right-winger, often further to the right than Netanyahu, who opposes Palestinian statehood, supports West Bank settlement expansion and has vowed to pursue a hawkish defense policy.

He will also be the first religious Israeli prime minister. Netanyahu has become a reliable ally of the haredi, or ultra-Orthodox, parties, but personally he is secular, just like all of his predecessors. Bennett identifies as Orthodox and wears a kippah. His ascent is a sign of the growth, and growing influence, of religious Zionists in a state founded by secular Jewish socialists.

Bennett will also be the first Israeli prime minister born of American parents. Like Netanyahu, he speaks fluent, basically natural English. When he worked in the tech world, before entering politics, he spent time living in New York.

Smoke rises from the Al-Jalaa tower in Gaza City, which housed apartments and several media outlets, including The Associated Press and Al Jazeera, after an Israeli airstrike, May 15, 2021. (Atia Mohammed/Flash90)

The conflict in Israel and Gaza came close to quashing this coalition — and also may have encouraged it.

Before fighting broke out between Israel and Hamas in Gaza, the same coalition appeared to be coming together. But the conflict in Gaza, and interethnic clashes in Israel, threatened to derail it.

Party leaders did not negotiate as rockets were flying. Mansour Abbas, the leader of the Raam party, froze talks with Lapid. Bennett said that he would no longer partner with the alliance of Netanyahu opponents.

Then, soon after the sides reached a ceasefire, everyone seemed to return to where they had been before the fighting started. Bennett wrote a long Facebook post bashing Netanyahu. Abbas renewed negotiations. Lapid began signing coalition agreements with other parties.

It may be that the fighting, after almost stopping this coalition in its tracks, ended up giving it even greater urgency. 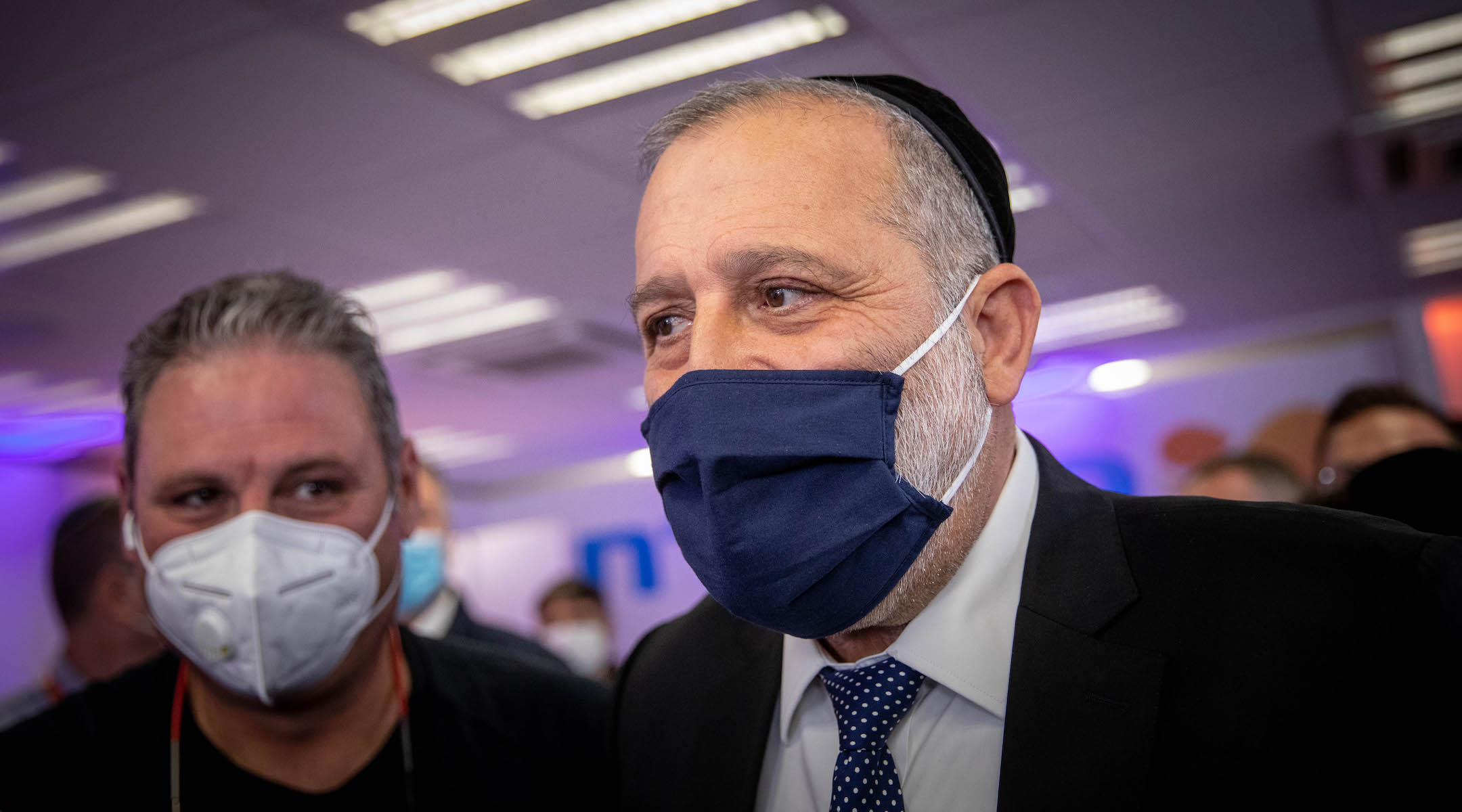 The government  will not include any haredi, or ultra-Orthodox, parties. But it will still be mostly Ashkenazi and male.

There are a lot of ways Israel’s incoming government will be different. There are also plenty of ways it will be the same.

Like every prime minister not named Golda Meir, the next leader of Israel will be an Ashkenazi Jewish man. And in certain ways, the government will be less diverse than previous ones. Although it will include an unprecedented number of parties, all but one of those parties is led by a man. None of the parties are led by Mizrahi Jews, or Jews of Middle Eastern descent.

And none of the parties are haredi, after six years in which haredi parties were given control of Israel’s religious affairs. On the one hand, that means this government could reform Israel’s religious policies, perhaps reducing funding to haredi institutions, requiring haredi men to enter Israel’s mandatory military draft, or liberalizing Israel’s Jewish conversion and marriage systems, which are controlled by the haredi Chief Rabbinate.

On the other hand, the coalition is so narrow and fragmented that it may be hard to pass any major legislation.

On that note, don’t expect this to be the government that makes peace with the Palestinians. Bennett opposes Palestinian statehood, as do other members of the coalition. Likewise, the left-wing and Arab parties will likely block any attempt to annex parts of the West Bank.

Other governments have come in with policy platforms or an ideological program. Because this one came together to oust Netanyahu and end a political crisis, it will have accomplished its goal the moment it gets sworn in. What happens next is anyone’s guess.