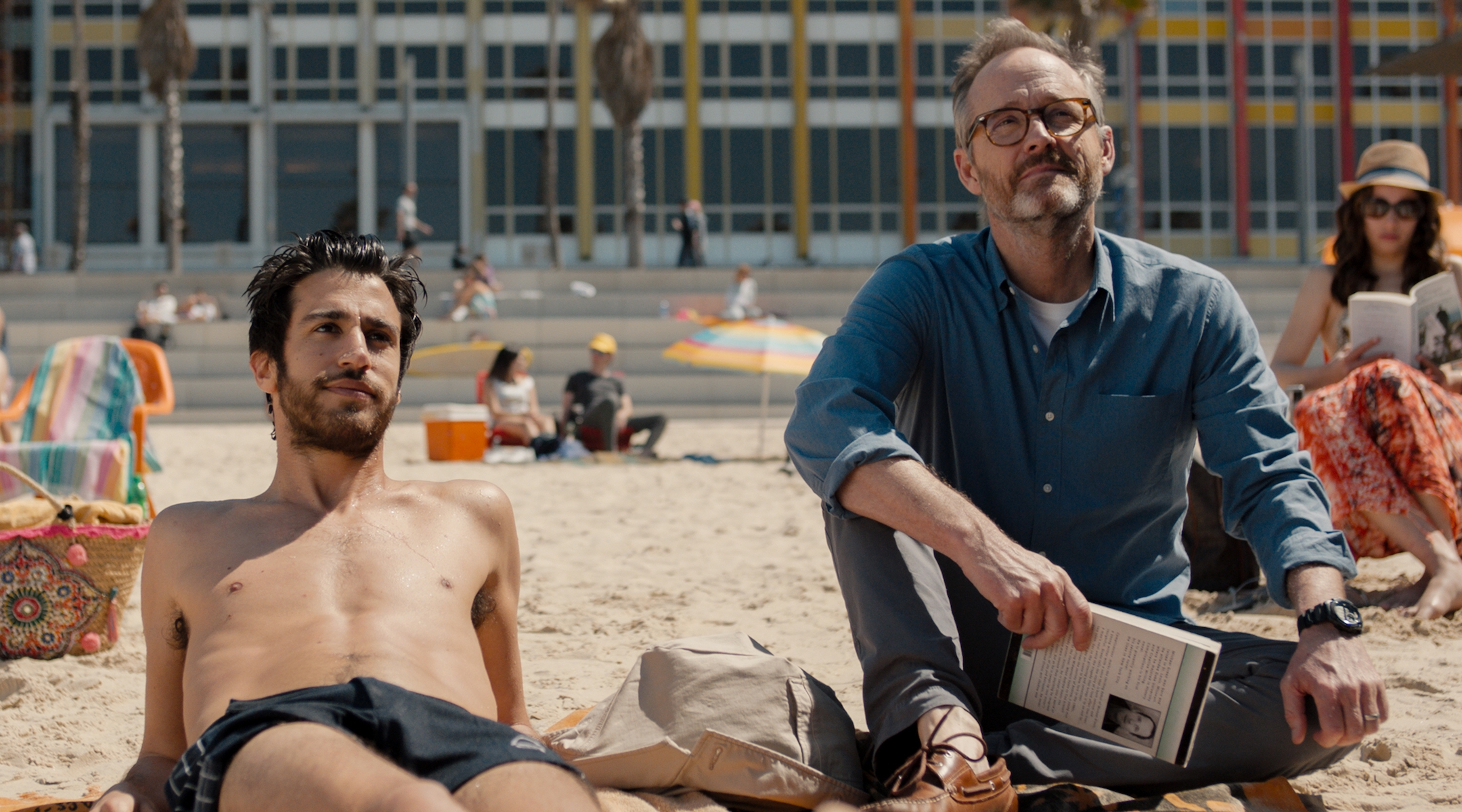 (JTA) — Eytan Fox’s new film “Sublet” opens with a slow fade-up on travel photographs of Israel: red rocks in the desert, a young woman smiling with the mud of the Dead Sea on her face, two paddleboarders on clear turquoise water. As the image comes into focus, it becomes clear that we’re actually looking at tourism ads in an airport. The film’s protagonist, Michael (John Benjamin Hickey), glides past with a vague look in his eyes. He does not look at the images.

Exploring this cultural gap between Israelis and American Jews is new territory for Fox, who has been a major queer voice in Israeli cinema for nearly two decades. His films usually capture identity crises within Israelis: what who they love and how they choose to live says about them. This time he’s casting his gaze wider, across the ocean — even as most of the action unfolds in a single Tel Aviv apartment.

The protagonist is American, a travel writer for The New York Times. His arrival in Tel Aviv provides a chaotic first impression: His sublet is still occupied and messy due to a date mix-up. Its occupant, Tomer (Niv Nissim), a young film student who makes campy, awkward horror, is desperate for the money that Michael’s stay will provide. He pitches the neighborhood, bragging about its “sexiest” qualities, and convinces Michael not to switch to a hotel.

Through a chain of events Michael, who was supposed to have the place to himself, ends up sharing it with Tomer, and the two men forge a tenuous bond, trading their queer Jewish worldviews across generations and nations.

Fox’s landmark 2002 film “Yossi & Jagger” tells the story of two Israeli soldiers who fall in love during their mandatory military service. His 2006 film “The Bubble” also explores a gay relationship, this time across the Israeli-Palestinian divide.

“Sublet,” Fox’s eighth feature, represents a new chapter: It’s his first film in which the protagonists speak primarily in English. Hickey, the star, is a Tony Award-winning American actor.

Unlike in “Yossi & Jagger” and “The Bubble,” the aspects of gay identity that have historically anchored queer movies — coming out and societal rejection — are not the focus of the plot here. Instead, Fox has crafted a pensive, dialogue-driven movie about different modes of moving through the world as a gay Jewish man: American and Israeli, early 20s and middle age.

“Once every few years when I get a chance to make a film or a television show, I think, OK, what are the issues that have piled up on the desk in my soul? What needs understanding, examining, processing?” Fox told the Jewish Telegraphic Agency.

When he began writing “Sublet,” he said, “I had just turned 50 and I was thinking, how did I come to be the man that I am: Jewish, Israeli, gay, filmmaker, husband to my husband, childless? How do we take all these issues and put them into characters? I realized I needed an American 50-something man who tries to understand what Tel Aviv is all about through meeting this young guy.”

Fox said that as a younger man, he felt more like Tomer than Michael: He was known for documenting “young Israel.”

“When I did ‘Florentine’ [a TV show from the late ’90s about young Israelis living in Tel Aviv], I was one of the gang; the actors and I were [close to] the same age,” Fox said. “But making ‘Sublet,’ I’m not 20-something anymore. I really had to learn about young people and their lives, and try to understand it, and not be judgmental about it.”

Fox channeled his musings on aging as a gay Jewish Israeli into the rapport between his two leads, who debate each other on their respective places within the country and the Jewish world. It’s a dynamic that’s on the minds of many cosmopolitan Jews these days whether or not they are Israeli.

“We are in the Middle East,” Tomer tells Michael, “but we want to be treated like we are in the West.”

Tomer’s relationship to Israel, and Judaism, is fraught at times. When his bike is stolen, he doesn’t call the cops because “the police in this area are racist.” (The 2019 Oscar-nominated Israeli short film “White Eye,” directed by Tomer Shushan, coincidentally tells a similar story.) Side characters also discuss moving to Berlin, where they feel they have more freedom to protest and make art following a common modern narrative of Jews and Israelis reclaiming Berlin as a Jewish space that’s also present in the popular Netflix series “Unorthodox.”

Tomer also rebels against more “traditional” models of gayness in a challenge to Michael’s lifestyle. Michael is married, while Tomer claims never to want to be tied down to just one person. Tomer considers the AIDS crisis a depressing bit of ancient history, while Michael lived through it.

Queer life and cinema in Israel have changed drastically since Fox’s first film. When the director made “Yossi & Jagger” in 2002, the Israeli military did not support the film.

“They knew it wasn’t politically correct to say they wouldn’t support a gay film,” he said. “So they used this lame excuse: We can’t support a film that endorses relationships between soldiers of different ranks. After the film became the success it did worldwide, they came to me and said let’s show your film to soldiers.”

Thus, a film the Israel Defense Forces wouldn’t support was subsequently screened on army bases, and when Fox made the sequel “Yossi” in 2012, it was the army who approached him offering help. The change in attitudes mirrors a broader cultural acceptance of the LGBT+ community in Israel, which Fox is only too happy to witness.

“If you had told me in the early ’80s growing up in Jerusalem that one day we’d have openly gay members of Knesset — that we’d have a transgender woman as a referee in the tough, macho world of Israeli soccer — I wouldn’t have believed you,” he said. “It’s wonderful that we have this openness because there are other ways we’re far from being open enough.”

Israel has been accused of using this one brand of openness as a way to avoid discussing darker, more difficult subjects: publicizing LGBT+ acceptance in order to divert attention from the plight of Palestinians, a strategy often referred to as “pinkwashing.” And with his films so prominent in global queer culture, Fox is closer to those accusations than most.

“I can understand people accusing the Israeli government of using my films for pinkwashing — saying we’re so wonderful, we have a gay film director, gay films, everything you can dream of, so people don’t ask us questions about the Palestinians,” he said. “But that doesn’t take away from the fact that Israel, and Tel Aviv more specifically, have become the most loving and accepting cities for the gay community.”

Despite their generational and cultural differences, Michael and Tomer’s relationship develops into something meaningful and memorable. Their encounter helps both characters achieve some clarity. It resembles Michael’s ultimate description of Tel Aviv: “full of contradictions. Chaotic and tense, but at the same time completely laid-back.”

“Sublet” opened in Israel last week — the first Israeli film to play in cinemas since the coronavirus pandemic began.

“The film is about coming back to life,” Fox said. “And I think all of us are in the midst of coming back to life after this crazy year. I felt that in the theater: People from all over the country were coming to the premiere, and they wanted to be in a theater with other people to enjoy the film together.”

“Sublet” opens in theaters on June 11, followed by an on-demand release on July 9.