‘A veritable sigh of relief’: How the world’s Jewish community came together to bring aid to Surfside 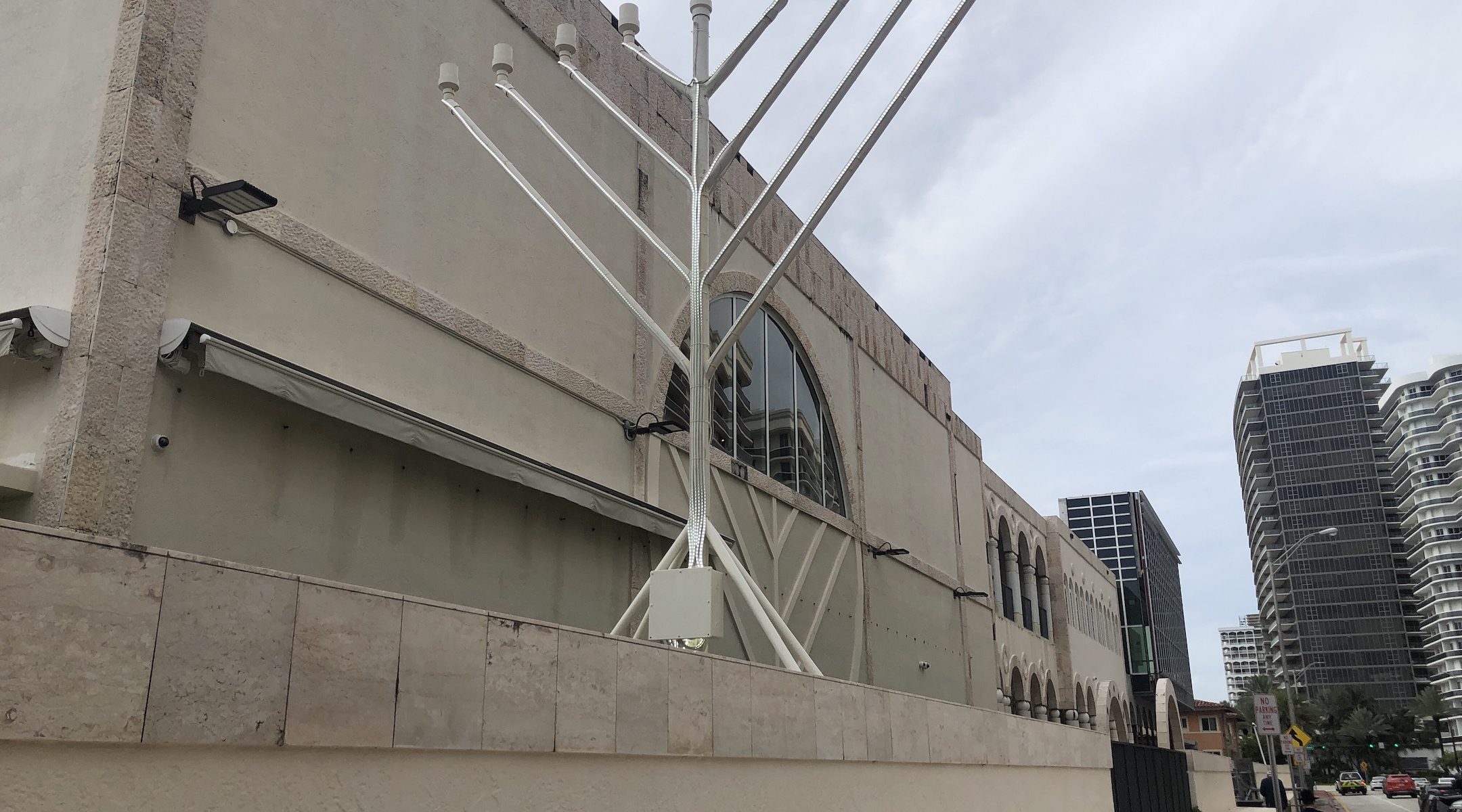 A view outside of The Shul, a synagogue in Surfside, Florida, June 25, 2021. (Ron Kampeas/JTA)
Advertisement

We’re standing in The Shul of Bal Harbour on Sunday, in its social hall under construction. Two days earlier, on Friday evening just before Shabbat, it was piled high with blankets, clothing, mattresses, food and toiletries for the families made homeless after a building in this town of 6,000 collapsed into a pile of rubble.

Now it’s almost empty thanks to people like Eisenberg and Judit Groisman, a tall, means-business woman in jeans and a black Women’s International Zionist Organization T-shirt with blonde hair pulled back tightly who’s busy giving volunteers orders laced with smiles. The supplies are going out to families made homeless by the collapse settling into temporary housing.

Eisenberg has been matching families with apartments owned by “snowbirds,” non-Florida residents who return home for the summer.

“Guys, does anyone know if we have syringes?” Groisman shouts.

The question I had posed to Eisenberg was how he got involved in the recovery efforts. I presume by his insistent “I’m a Jew” response that he is answering the question of why he got involved, not how, so I repeat my initial query.

Eisenberg lives across the street from The Shul of Bal Harbour and is part of this tight-knit community — Surfside is at least one-third Jewish. That’s why, within hours of the collapse of Champlain Tower South at 1:30 a.m. Thursday, the texts, WhatsApp messages and calls lit up his phone.

Across the street and across the ocean, Jews came together to bring relief to a crowded little beachside community devastated by a sudden unfathomable loss.

Eisenberg knows at least 10 people “in the rubble,” as he puts it, and he knows them because they are Jewish and he is Jewish, and they are part of his community.

“Brad Cohen, I was under the huppah with him,” he says — meaning he was a witness at Cohen’s wedding. “I saw him every day.”

As of Wednesday morning, the death toll stood at 16 with more than 140 people still missing.

The woman in her 30s schlepping boxes at the Surfside community center four blocks down, about a mile from the building collapse, says the same thing: She grew up in the Cuban Jewish community, and there were these ladies her mother was friends with, and though she wasn’t close to them, now that she’s grown up she always said hello when she saw them on the street. And now … they’re gone.

But not quite. The missing peek out from behind faded roses, on printouts thick with Miami’s wet 90-degree heat, pinned to a fence overlooking the rubble.

A grinning young man, Andres Levine, leans into a woman’s head, her hand languidly appropriating his shoulder. A man in a tux, a blond, leans into his chest. The text reads: “Dr. Brad Cohen’s brother Gary (also a Doctor) is missing as well.” There is something unbearably poignant about the parenthetical aside, “also a Doctor,” with a capital “D”: Not one, but two good men are missing.

“Ilan Naibryf+Deborah Berezdivin,” says another printout. A happy young couple poses arm in arm, crowns touching, against a seascape, maybe the one just beyond the rubble, its salt lacing an acrid stench. The printout is partially obscured by a string of prayer beads hanging off the fence.

This is not just a Jewish tragedy; everyone knows that.

The beads, the crucifixes, one as blue as the Miami sky (when it’s clear of the rains), the leather-bound New Testament on the pavement abutting the fence. The yellow note, hanging precipitously, making a plea “in Jesus’s name.”

The circle of evangelical Christians standing next to the memorial fence, holding hands and belting out prayers in Spanish.

The relics that are heartbreaking in their universal meaning: The toy truck, the battered Supersoaker.

Among those who remain missing, The Shul says that about 40 are Jewish, meaning most are not Jewish. And the Jews who have come together from across the world, the rescue teams from Israel, from Mexico, from Canada, know it.

“It’s not only about Jews,” said Nachman Shai, the Israeli minister for the Diaspora who was given VIP treatment when he visited here this week accompanying Israeli rescuers. “I have to make sure that that’s fully understood. It’s about human beings, it’s about a national tragedy.”

Raphael Poch, the spokesman for the United Hatzalah team from Israel, describes how Hatzalah’s trained counselors are working on the second floor of the Grand Beach Hotel, where the families, Jewish and non-Jewish, sit and wait.

“It’s a state of unknowing, and that can cause a sense of helplessness,” he says. “Helplessness is the beginning of what can lead to an emotional reaction or traumatic stress reaction. And that’s what we’re trying to avoid — we’re engaging them to help the people around them if we see there’s a need because they’re often in the same place, the same location with other families. So even if they’re not doing anything that moment, they can go and help another family, can have a conversation with them, they can talk with them, they can interact with them.”

There are Jewish ways of knowing and there is a Jewish way of unknowing: The Jewish tradition of the shomrim, the guardians, are seeking permission to stake out the rubble, to watch over the dead — or, more precisely, the people who may be dead — until they are buried. Or, miraculously, alive. No one knows, with absolute certainty, who is dead and who is alive.

“We have rabbis who are on call who are ready to be with families as they receive notifications,” says Jacob Solomon, the longtime president of the Greater Miami Jewish Federation.

It’s hard to extract meaning from so arbitrary an event, one without intention. A rabbi gives a shiur, a lesson, following Havdalah services Saturday night at The Shul, and mentions the building collapse perfunctorily, saying the services were in “the honor” of the dead and missing. He launches into a fire and brimstone sermon about the Fast of Tammuz 17, which begins that night, and how the sins of the Jews merited its privations.

Miami’s Jewish community is more insular, Solomon says, because so much of it is first-generation — from Israel, from Venezuela, from Mexico, from Central America. 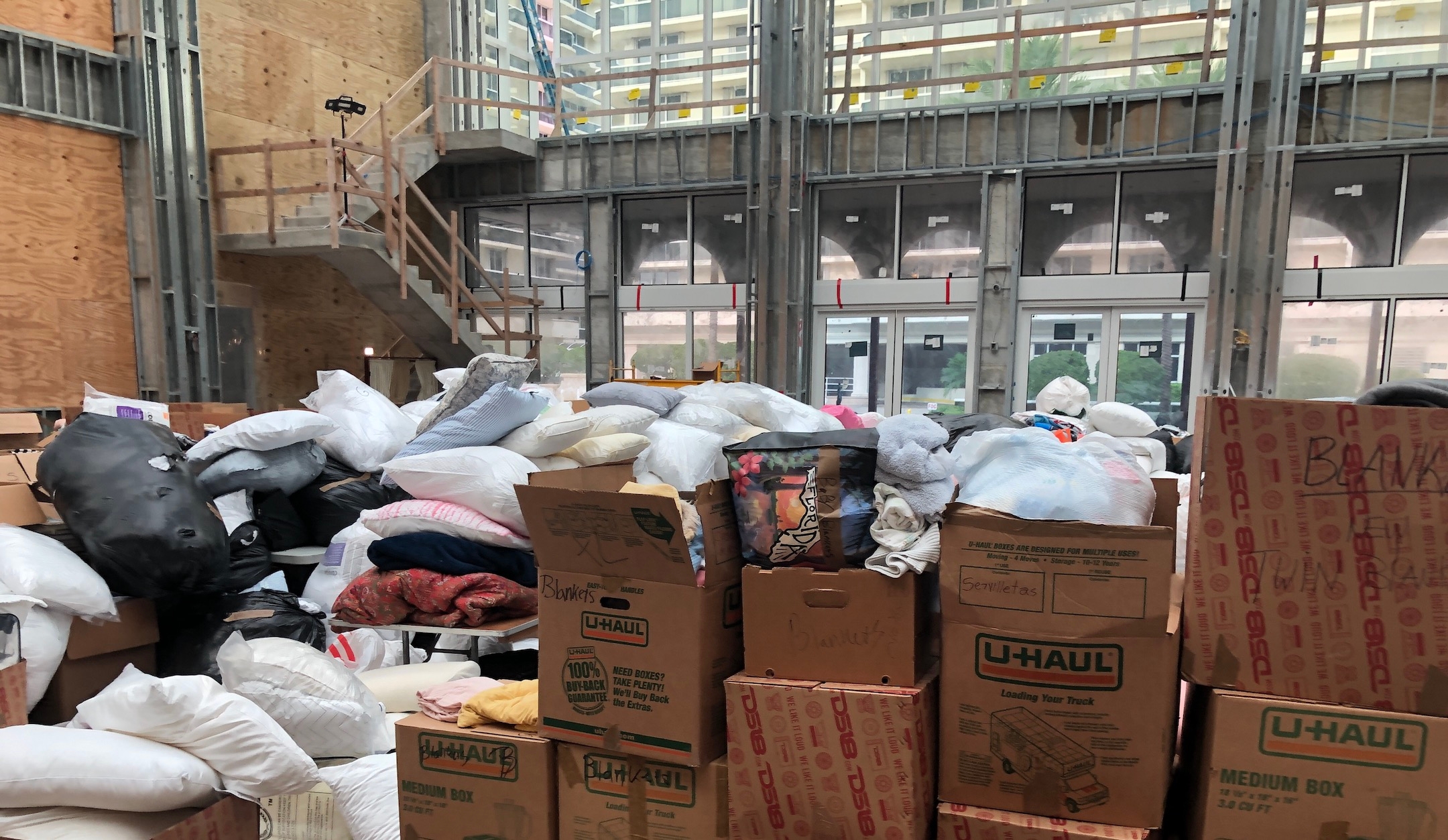 A social hall under construction in The Shul, a synagogue in Surfside, Fla., is piled high with donations for homeless families less than 18 hours after a nearby building collapsed, June 25, 2021. (Ron Kampeas)

Just weeks before the building collapse, some of the same people volunteering this week were turning up at the protests against the spike in antisemitism following the Israel-Gaza conflict.

Poch says he was bowled over by the welcome for the Israelis.

“Once the Israeli teams landed, there was a veritable sigh of relief,” he says. “The families, they basically felt like, you know, ‘You guys are here to help and it’s amazing you came all this way.’ They appreciate just the fact that we came. We gave them a sense of relief and a sense of hope.”

At a news conference, Surfside Mayor Charles Burkett — who has been coordinating search and rescue efforts with Miami-Dade County authorities as well as with the international teams — describes an encounter he had on Sunday morning at the Grand Beach Hotel.

Shai was not surprised when he heard the story.

“Jews around the world look at Israel as a source of support,” he says, “and sometimes even as a source to come and save them.”

Or they look to themselves. Eisenberg, at The Shul, scrolls through his text messages and holds them up for me to see: Jews from around the country who want to help.

“Who can I talk to at the shul,” a man from New York asks. “We have crisis response canines.”

A Baltimore woman wants to help set up a database of the missing.

Eisenberg looks around at the emptying storage area.

“I don’t know how this got done. There was no one person leading it,” he says.

“I need a volunteer to help me bring mattresses,” she says.