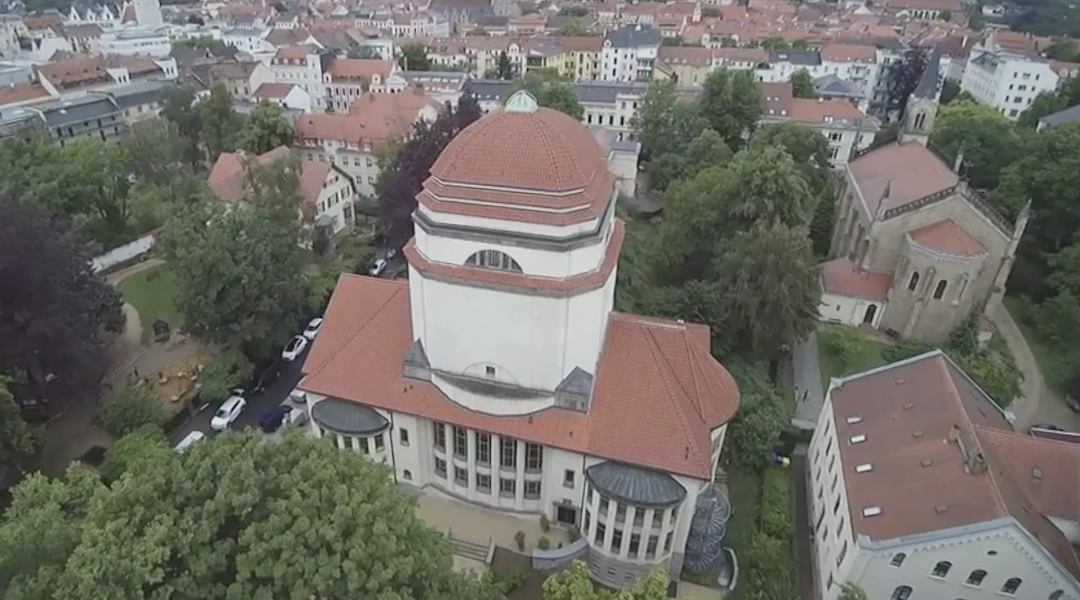 (JTA) — For years after World War II, the once magnificent Goerlitz Synagogue in Germany housed a family with goats and pigs. The roof of the Art Deco building was crumbling; the government came close to demolishing the whole structure.

But this week, that very synagogue — the only one in the state of Saxony to survive the Kristallnacht pogrom of 1938 — was rededicated as a house of worship and space for interfaith gatherings after some 30 years of renovation and restoration.

The Cultural Forum Synagogue Görlitz — which soon will house both Jewish religious services and interfaith cultural events — was revealed in a streamed ceremony on Monday in an event that had been postponed several times due to the coronavirus pandemic. The Norwegian Jewish vocalist Bente Kahan performed, and local and national politicians, rabbis and other dignitaries offered remarks.

Completed in stages over the years, the restoration was “lovingly done,” though it did not bring the synagogue fully back, said Alex Jacobowitz, a cantor and chair of the town’s Jewish community. For example, the tablets in the sanctuary with the Ten Commandments have not been restored, nor have the Stars of David on the building’s exterior, or the words from Exodus that once graced the entrance: “And let them make Me a sanctuary, that I may dwell among them.”

But the tiny Jewish community — fewer than 30 members — and its supporters did raise some 70,000 euros (about $83,000) to cover the cost of replacing a giant Jewish star that once stood on the building’s cupola, visible for miles around in the city of some 55,000 near the Polish border.

Architects William Lossow and Hans Max Kuhne designed the synagogue, which had room for the entire community of about 600 Jews at the time of its original opening in March 1911. The city of Goerlitz boasted numerous Jewish institutions at the time, Jacobowitz told the Jewish Telegraphic Agency. He recently published a book about the synagogue.

In the Kristallnacht pogrom in November 1938, Nazis set the building ablaze, but the local fire department put out the flames. A few years later, many of the community’s Jews were deported and killed in the Holocaust.

After the war, the building — located in the former East Germany — fell into disrepair. For a while it was used to store theater props, and it also housed a local family and their farm animals. The city bought the synagogue from the remnant Dresden Jewish community in 1963, and then formally purchased it again from the Conference on Jewish Material Claims Against Germany in 1990 after the country’s unification.

A group of local citizens championed its restoration. Ultimately the costs of some 12.6 million euros (about $15 million) were borne by the federal and state governments, as well as by private foundations and individuals. The first thing to be fixed was the roof, in 1990.

As the final touch, the new star is expected to be placed on the dome later this year, Jacobowitz said.

“After many decades, the Jewish community in Görlitz finally has again a place of prayer and pause,” the Orthodox Rabbinical Conference Germany said in a statement Monday. “We hope that the synagogue in Görlitz will be a place of exchange and encounter for all citizens on this side and on the other side of the Neisse River, in order to learn much more about each other and from each other and to break down prejudices.”

In a gesture summing up years of interfaith efforts, the son of a Protestant minister who worked in the city donated his own Steinway piano to the space, saying it would “now find a new home” in the town where he was raised.

Among those speaking at Monday’s event were Goerlitz Mayor Octavian Ursu; the prime minister of Saxony, Michael Kretschmer; and Rabbi Akiva Weingarten of Dresden.

“I always have found it important that the synagogue has continued to show its scars,” Jacobowitz told the Jewish Telegraphic Agency, “to show that the story of the Jews of Goerlitz will not be destroyed by political exigency.”