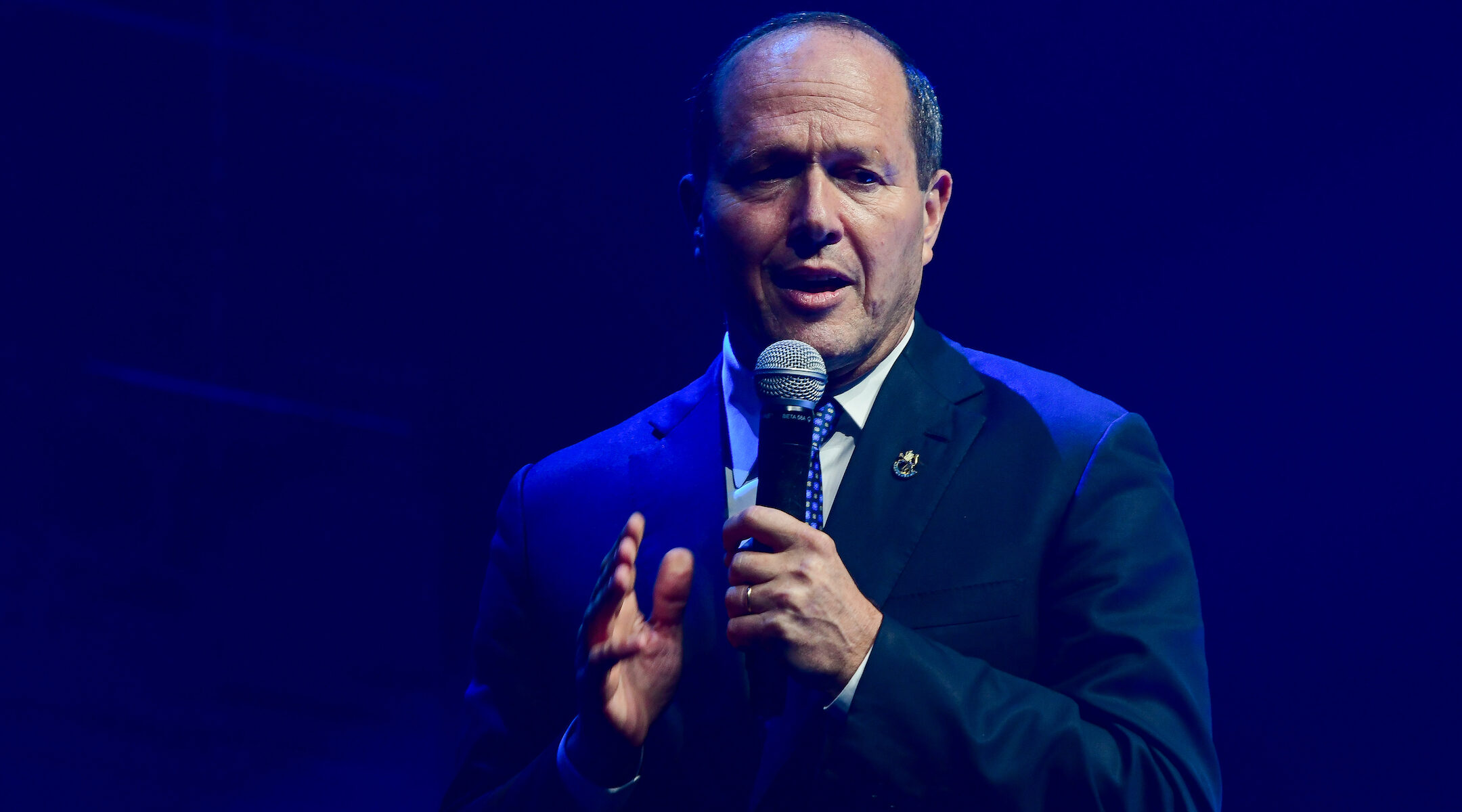 NEW YORK (JTA) — Nir Barkat was supposed to be in a different place now.

When the popular two-term mayor of Jerusalem entered national politics and ran for the Knesset in 2019 with Benjamin Netanyahu’s Likud party, it seemed like a safe bet. After all, the party had governed Israel for a decade and looked poised to win reelection yet again.

Instead, that April, Israel entered into a spiral of four largely inconclusive elections. Two years later Netanyahu is no longer in power, and Barkat is a backbench lawmaker in the parliamentary opposition. Barkat has declared that he intends to lead Likud one day and has assembled a large personal staff, but says he’ll vie for the party leadership only after Netanyahu, 71, retires. And no one knows when that will be.

So without a role in Israel’s governing coalition, Barkat is spending this week on a self-funded solo trip to the United States to lobby elected officials here. His goal is to convince the United States not to reopen a diplomatic consulate to the Palestinians in western Jerusalem that President Donald Trump closed in 2019.

The consulate, which had existed before Israel’s founding more than seven decades ago, was active for all of Barkat’s decade as mayor and didn’t seem to pose a problem for him at the time. But Barkat says that since Trump moved the U.S. Embassy in Israel to Jerusalem, reopening the consulate is unnecessary. He believes it would send a signal that the Palestinians have a claim to the city, which Israel has controlled for more than 50 years and views as its undivided capital.

“Serving the Palestinians must be done from the Palestinian Authority, not from Jerusalem,” he told the Jewish Telegraphic Agency in an interview last week in midtown Manhattan. “We will not allow consulates to open up like mushrooms after rain and de facto divide the city of Jerusalem. That’s totally unacceptable.”

Barkat says he is speaking for the Israeli consensus, but he isn’t traveling with the approval of Israel’s government, which he says won’t even speak with him. (The Prime Minister’s Office would not comment on that claim.) Nor is Barkat meeting with any officials in the Biden administration. He has met with senators and Congress members, including Republicans such as Rep. Kevin McCarthy, the House minority leader and Sen. Lindsey Graham, as well as Democrats such as Reps. Ted Deutch and Jake Auchincloss.

As proof that he speaks for the majority of Israeli society, Barkat commissioned a poll that he shared with JTA showing that 72% of Israeli voters oppose reopening the consulate.

And while he seeks to convey that position to the U.S. government, it gives him an opportunity to raise his profile in Washington, D.C. Barkat may be in the opposition now, but Likud remains the Knesset’s largest party. If he ascends to its leadership, Barkat could have a shot at being prime minister one day.

“It’s my prerogative as part of Israel’s opposition to come and state my claims, which by far represent Israeli public opinion,” he said. “You never [put up] your hands on ideology and things you believe in, and I believe it’s the right thing to do.”

Barkat was elected to the Jerusalem City Council, and then mayor, after making millions in Israel’s tech industry as a founder of the cybersecurity startup CheckPoint. As mayor for 10 years beginning in 2008, he focused on bringing business and tech to the city while trying to burnish the city’s reputation among Israelis who saw it as unfriendly to young, secular life.

Some improvements brought tangible changes to daily life and culture, especially on the city’s western, largely Jewish side: a light-rail system, a vibrant restaurant scene at the city’s outdoor market, the expansion of its flagship soccer stadium, and a restored 19th-century train station that has become a family-friendly pedestrian eating and shopping area.

Other ventures could be fairly described as gimmicks meant to compete with Tel Aviv, such as an artificial beach (sans water) installed in the middle of the city or the effort to change the international code for Ben Gurion Airport from TLV to JLM. Neither worked out.

In many ways, Barkat is reminiscent of Michael Bloomberg, the billionaire former mayor of New York City. Like Bloomberg, Barkat touts his bona fides as a competent manager from the business world looking to improve quality of life through improvements to public spaces in the city.

“Michael and I became friends, and we share the same vision of how you bring tools and experience from the modern technology world into government,” he said of Bloomberg. “Initially you have some disadvantages in mastering politics, but once you master politics it’s a huge advantage.”

Like Bloomberg, Barkat switched parties mid-career, from the centrist Kadima to Likud. But unlike Bloomberg, who portrays himself as a centrist, Barkat identifies with Israel’s right — especially in terms of how he views the nation’s relationship with the Palestinians — both in Jerusalem and across Israel and the West Bank.

For decades, activists as well as Israel’s state comptroller have pointed to wide disparities in income, education and urban planning between the city’s Jews and Arabs. A state comptroller’s report from 2019, soon after Barkat left office, said conditions in the city “have created, in East Jerusalem, a society with unique characteristics in which many feel feelings of discrimination, hardship and despair.”

In addition, violence in the city occasionally sparks wider conflagrations in Israel. Clashes between Israeli police and Palestinian protesters on the Temple Mount in Jerusalem’s Old City this spring led to interethnic conflict in cities across Israel, along with an 11-day conflict between Israel and Hamas in Gaza.

Barkat says the solution to many of these problems lies in doubling down on Jewish sovereignty over the entire city. He hopes for a world in which all Arab Jerusalemites apply for Israeli citizenship, as that would signal their acceptance of Israeli control over the city.

He blames the lack of adequate services in some Arab neighborhoods, particularly those beyond Israel’s security barrier, on the activity of some of their residents, which Barkat says poses a security risk.

“[When] the security is challenged, it’s difficult to bring in services, then there are gaps in quality of service,” he said. “The residents of Jerusalem must realize that if they want good services, they need to help us help them and decrease tension and decrease violence and they will get better service.”

Barkat, like Netanyahu, opposes the establishment of a Palestinian state. But he doesn’t see Jerusalem as a model for the wider relationship between Israelis and Palestinians.

“We must never allow two states because it’s a security threat that we cannot bear,” Barkat said. “We’ll need a special solution, [as] happens sometimes here and there in the world, where they have civil autonomy and we have full security [control].”

Barkat did hint at possible differences between himself and his party boss. While Netanyahu was known for an increasingly close alignment with the Republican Party in the U.S., Barkat emphasized the importance of bipartisan support for Israel.

“If we talk about the relationship with the United States, I think we should, both sides, make strides to decrease the partisan issues, be more considerate of the different interests,” he said.

But when it comes to the existential issues facing Israel, including whether and how to address its control of millions of Palestinians, Barkat says he has traveled to the United States not just to speak for Likud, but in the name of all Israelis — even if he won’t be their leader just yet.

“We must not go that path,” he said regarding the reopening of the consulate. “This is my real position and I will do everything I can to stop it.”