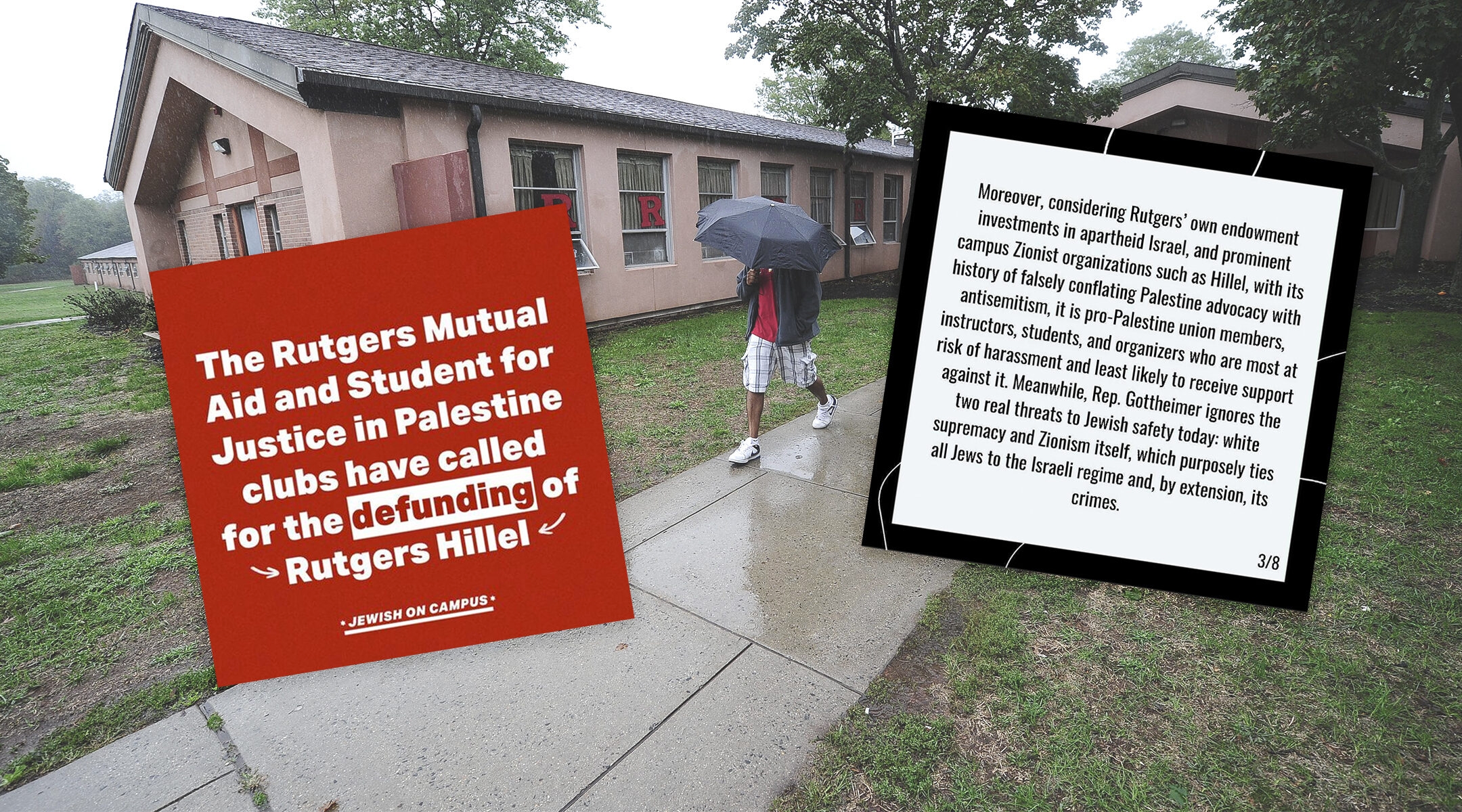 A student-led group, Jewish on Campus, wrote on Instagram that the Rutgers University branch of Students for Justice in Palestine had called to defund Hillel. The accusation spread across social media. (Photo illustration by Grace Yagel; photo by Emmanuel Dunand/Getty Images)
Advertisement

(JTA) — For the past several months, American Jews concerned about antisemitism on campus have had their eyes trained on Rutgers University.

In May, the chancellor of the school’s flagship New Brunswick campus condemned antisemitism — then apologized for doing so after the campus chapter of Students for Justice in Palestine complained.

The next month, unions representing lecturers at the university issued statements calling Israel’s actions “apartheid.” The school’s longtime Hillel director stepped down at the end of June, warning that “the college campus has been, for as long as I’ve been at Hillel, the fount of antisemitism in America.”

So when social media posts began popping up last week accusing the Rutgers chapter of Students for Justice in Palestine of calling to “defund Hillel,” it seemed to confirm many people’s fears. Jewish activists on Twitter echoed the accusation, and condemnations poured in from sources including an aide to Sen. Ted Cruz and the group StopAntisemitism. In a statement, the Anti-Defamation League said the demand to “halt funding for the Hillel” was “outrageous.”

There was just one catch: The call to defund Hillel never happened.

Nearly two dozen organizations, including Students for Justice in Palestine, or SJP, had published an extended statement on July 26 criticizing a New Jersey congressman’s pro-Israel stances. It also called Zionism one of the “real threats to Jewish safety today.”

One line of the statement criticized Hillel’s support of Israel. But the word “defund” (or any of its variations) does not appear in the statement, nor is there any other call for Hillel to lose financial backing. The statement does support two specific calls for divestment from Israel; neither of those documents references Hillel or its finances.

A call from pro-Palestinian activists to divest from a center of Jewish campus life would demonstrate for many a textbook case of anti-Zionism crossing over into antisemitism. But it didn’t happen. So how did the misinformation take hold on social media?

The first social media account to amplify the “defunding” call was Jewish on Campus, a student-led group launched last year that shares largely anonymous accounts of antisemitism at schools across the country and world. The group pointed to a sentence in the SJP statement that juxtaposes the Rutgers endowment with a mention of Hillel. The sentence argues that pro-Palestinian activists at Rutgers are at greater risk than Jews.

“Moreover, considering Rutgers’ own endowment investments in apartheid Israel, and prominent campus Zionist organizations such as Hillel, with its history of falsely conflating Palestine advocacy with antisemitism, it is pro-Palestine union members, instructors, students and organizers who are at most risk of harassment and least likely to receive support against it,” an Instagram post of the statement said.

Julia Jassey, one of the founders of Jewish on Campus, said Monday that she thought the sentence looked like it was saying the Rutgers endowment funds Hillel — it does not. Because Hillel supports Israel, and SJP’s statement pushed Rutgers to divest its endowment from Israel, she inferred that the statement was calling for Hillel to be defunded.

“They call on the university to divest from ‘oppression and injustice’ and ‘apartheid Israel,’ and they label Rutgers Hillel as a ‘prominent campus Zionist organization’ complicit in oppression and injustice in the very same sentence,” Jassey told JTA. (The statement’s mention of Hillel and the discussion of divestment are in fact separated by several paragraphs.)

“They end by requesting an SJP-led audit of Rutgers’ endowments,” she said. “The implication is quite clear.”

One pro-Israel activist who posted several tweets about the “defunding” accusation, Hen Mazzig, said that in light of SJP’s history, he stands by his interpretation. Mazzig has 56,000 followers, and his tweets about the accusation have collectively been shared hundreds of times.

“The way that I saw it, it was connecting the dots,” he said. “For me, it made sense that this is what they’re talking about, knowing they’re about divestment and promoting divestment, and mentioning Hillel as one Zionist organization the university is investing in, and knowing that one of the actions [endorsed] in the full statement was divestment.”

David Schraub, a professor at Lewis and Clark Law School who comments frequently about antisemitism online, said he had deleted his tweets about the Rutgers episode after reading the SJP statement more closely and determining that it had not called to defund Hillel. He said the statement was confusing and noted that activists had sought to eject Hillels from other campuses.

But he also said the episode pointed to deep-seated dynamics in Jewish social media activism.

“Anytime anyone comes after Hillel, there is going to be a spinning up of the outrage machine,” he said, adding, “Certainly there are plenty of people who, anytime they have the opportunity to take shots at SJP, they are going to be happy to take them without thinking too carefully.”

The Anti-Defamation League, perhaps the most prominent antisemitism watchdog, was among the groups that reacted quickly, tweeting its statement alongside Jewish on Campus’ post on the same day it went up. One day earlier, it had announced a partnership with Hillel to track antisemitism on college campuses.

“ADL is shocked by this outrageous statement suggesting that Rutgers blacklist and halt funding for the Hillel, which represents Jewish life at Rutgers,” said Scott Richman, who directs the group’s New York and New Jersey office, in the statement.

But when Hillel International, the umbrella group for individual campus Hillels, put out a statement declaring support for Rutgers Hillel, it did not mention “defunding.” That’s because the accusation “may not have been entirely accurate,” a Hillel official told JTA.

A statement by the Hillel chapter at Rutgers likewise doesn’t mention “defunding,” though it does lament that “campuses have become increasingly hostile to Jewish life.” The Hillel’s interim executive director, Rabbi Esther Reed, told JTA that she had no further comment.

On Tuesday, five days after his initial remarks, Richman told JTA that the full SJP statement “certainly makes it clear they’re not focused on defunding or halting funding to Hillel.”

But on Tuesday, Richman suggested that he regretted commenting so quickly about the saga on Twitter — even as he said social media remained an important arena for combating antisemitism.

“As always, ADL needs to be very careful with the language it uses,” he said. “As an organization that people in the community pay attention to, with a strong brand and a strong reputation, we have to be very, very careful with how we use that bully pulpit and the responsibility that we have.”

He added, “You have the opportunity to get information out there, to get points of view out there, to raise questions, to raise the issues of the day very, very quickly. The problem is when it devolves into hate and misinformation, that’s not helpful.”