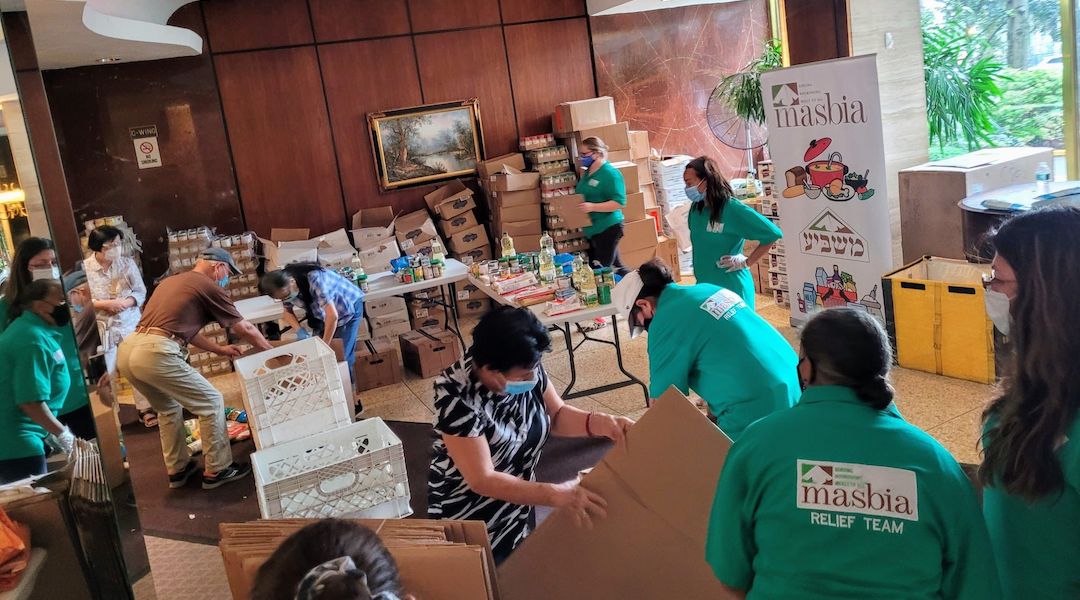 Chefs from the Masbia Relief Team cooked up a pop-up hot dinner for victims of Hurricane Ida at their building complex on Grand Central Parkway in Forest Hills, Queens, on Sept. 9, 2021. The kosher pantry also distributed 20,000 pounds of shelf-stable grocery food at the complex, where one person died, four low-lying apartments and dozens of cars were destroyed, and 420 families were stranded with no hot water and no elevator. (Courtesy Masbia)
Advertisement

Shabbat shalom, New York. We are remembering the 20th anniversary of the attacks of Sept. 11 on “Shabbat Shuva,” a traditional day of reflection, repentance and renewal that falls between Rosh Hashanah and Yom Kippur.

STANDING GUARD: In the days and months after the attacks on the World Trade Center, students from Stern College sat a regular vigil over the remains of victims at what was then Bellevue Hospital Center. Jessica Russak-Hoffman, one of the organizers of the “shmira,” wonders if their souls “remember me. If they remember all of us who sat our vigil. I remember them.” (JTA)

ANGEL WITH A LADLE: Elisha Gechter’s father served kosher soup to hundreds of first responders in the aftermath of the attacks. In his memory — Michael Horen died in 2020 of a leukemia likely brought on by his exposure at the site — her family is “trying to spread the word that help is available to those affected to cover the costs of health treatment.” (Kveller)

WHO BY FIRE: Jewish groups across New York City — including the Tribeca Synagogue and Dorot — will be marking the anniversary of the terrorist attacks, which falls on Shabbat this year. (JNS)

SHOULDER TO SHOULDER: In an Op-Ed, Jewish, Christian and Muslim leaders called on their co-religionists to “march as a nation united, shoulder to shoulder, advancing our common American ideals.” (Daily News)

CAUGHT ON VIDEO: A hitman disguised in the clothing of a Hasidic Jew gunned down a formerly incarcerated man in South Ozone Park, Queens in what police are calling a gangster-style “execution.” (Daily News)

Dr. Joseph I. Kramer, who gave up a lucrative suburban pediatric practice to serve poor families on the Lower East Side, where he had been born, and in the Williamsburg section of Brooklyn, died on Aug. 30 at age 96. In a 1983 profile, New York magazine called him “probably the only solo practitioner in one of the most ravaged and deadly neighborhoods in the city.” (New York Times)

The New York Giants brought back defensive back and special teams player Nate Ebner, ahead of Sunday’s season opener against the Denver Broncos. (giants.com) In 2019, as a New England Patriot, Ebner joined his teammates on a trip to Israel, where his Jewish father represented the United States in rugby at the Maccabiah Games in the late 1980s.

Liz Solomon Dwyer, founder of the Brooklyn-based King David Tacos, has landed a deal to sell her Austin-style Tex-Mex fare at four Manhattan Whole Foods. Solomon Dwyer, who is Jewish, says the brand was named after her father David, not the biblical king. (Crain’s)

Andrew Silow-Carroll, editor in chief of The Jewish Week, misses the people in synagogue who frankly drive him crazy.

This week’s Torah portion shows a humble Moses going from family to family to offer consolation and ask for forgiveness. It’s a lesson in how we can all heal our “relationship with flawed humanity,” writes Freema Gottlieb.

The 92nd Street Y will present a panel discussion reviewing the current state of the research emerging from the World Trade Center Program Clinical Center of Excellence at Mount Sinai. Register for free. Tonight, 7:00 p.m.

The Museum of Jewish Heritage – A Living Memorial to the Holocaust and the Knickerbocker Chamber Orchestra will present a special concert, in person and online, to commemorate the 20 anniversary of the events of Sept. 11, 2001. Get info here. Saturday, 8:00 p.m.

Join author Lori Banov Kaufmann — author of “Rebel Daughter” — and Dr. Jonathan Price of Tel Aviv University as they discuss her book of historical fiction and share the details of their 10-year collaboration. Go here for details and to register for this Zoom event, presented by Congregation Beth Sholom in Teaneck, New Jersey. Sunday, 11:30 a.m.

Join Dayenu, Jewish Climate Action Network and over 20 other organizations in Grand Army Plaza in Brooklyn for a “Hear Our Call–Climate Action Now” rally. Rabbis and other rally-goers will call on Sen. Chuck Schumer (invited) to hasten the passage of climate legislation. More information here. Sunday, 1:00 p.m.

Photo, top: Chefs from the Masbia Relief Team cooked up a pop-up hot dinner for victims of Hurricane Ida at their building complex on Grand Central Parkway in Forest Hills, Queens, on Sept. 9, 2021. The kosher pantry also distributed 20,000 pounds of shelf-stable grocery food at the complex, where one person died, four low-lying apartments and dozens of cars were destroyed, and 420 families were stranded with no hot water and no elevator. (Courtesy Masbia)

CORRECTION: A previous version of this story referred incorrectly to the controversy surrounding Debbie Almontaser. The incorrect information has been deleted and corrected.