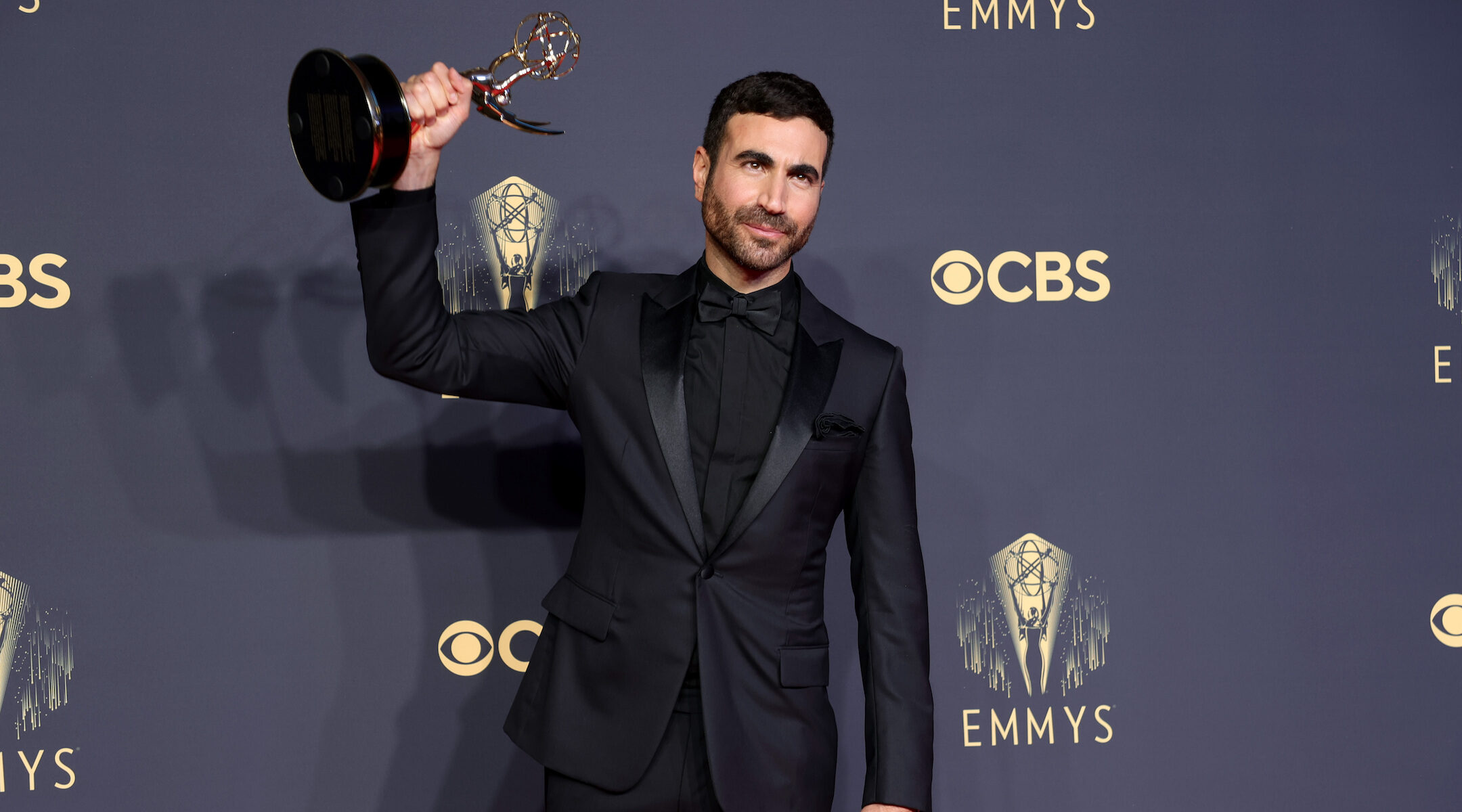 (JTA) — It was a tale of two speeches: One Jewish actor delighted with his acceptance speech, while a Jewish director earned the scorn of the internet with his.

At the Emmy Awards on Sunday night, Brett Goldstein, a co-star of the smash hit comedy “Ted Lasso,” won best supporting actor in a comedy series, and proceeded to delight the audience with an acceptance speech that riffed on his character’s penchant for swearing.

“I was very, very specifically told I’m not allowed to swear, so…” the Jewish actor said, before cursing in a line that was edited out of the live broadcast. “So this speech is going to be f—ing short.”

Goldstein’s Roy Kent character, the gruff captain of an English soccer team that gets a new coach — in the form of Ted Lasso, an ever-optimistic American played by fellow Emmy winner Jason Sudeikis — had delighted Apple TV+ audiences as well. The feel-good tale captured four of the ceremony’s top awards, including best comedy series.

Goldstein, who was bar mitzvahed in his native England, first joined the show as a writer, before taking on the role. Besides Goldstein, the show also features Moe Jeudy-Lamour, who recently spoke with JTA sister site Alma about being a Haitian Canadian Jew who lives in Los Angeles.

Meanwhile, Scott Frank — a respected screenwriter and director who co-created the Netflix drama “The Queen’s Gambit,” which took home two top awards — had the opposite effect with his acceptance speech, during which he ignored the show’s music telling him to wrap up a total of three times. Frank had won in the best directing for a limited series category for his work on the show, which is based on a novel that follows a troubled chess prodigy.

Those two series, both of which aired on streaming platforms, epitomized the main takeaway of the night — that streaming services have come to completely dominate the world’s biggest TV awards night. Netflix’s “The Crown,” created by Peter Morgan — who was born to a German Jewish father who fled the Nazis — also earned a slew of honors.

Further down on the Jewish wins ledger, “Saturday Night Live” — the pioneer sketch comedy series created by Lorne Michaels that has been a launching pad for countless Jewish comedians — won best variety sketch series for what feels like the millionth year in a row.

There were several big Jewish names who came up short on Sunday:

–Jurnee Smollett, nominated for best lead actress in a drama series for her role in “Lovecraft Country,” lost to Olivia Colman of “The Crown.”

-Michael Douglas, nominated for best actor in a comedy for “The Kominsky Method,” lost to the aforementioned Sudeikis. (But he won in the same category in 2019.)

–Tracee Ellis Ross, who has been nominated for best lead actress in a comedy series for years for her role in “black-ish” but has never won, lost again this year, to Jean Smart of HBO’s “Hacks,” which also garnered several wins.

-But the Jewish star of “Hacks” did not join the winners — breakout Jewish comedian Hannah Einbinder, who plays Smart’s sidekick, lost in the best supporting actress in a comedy category to Hannah Waddingham of “Ted Lasso.”

-And Daveed Diggs, nominated for best supporting actor in a limited series or movie for the Disney+ broadcast of “Hamilton,” lost to Evan Peters of HBO’s “Mare of Easttown.”