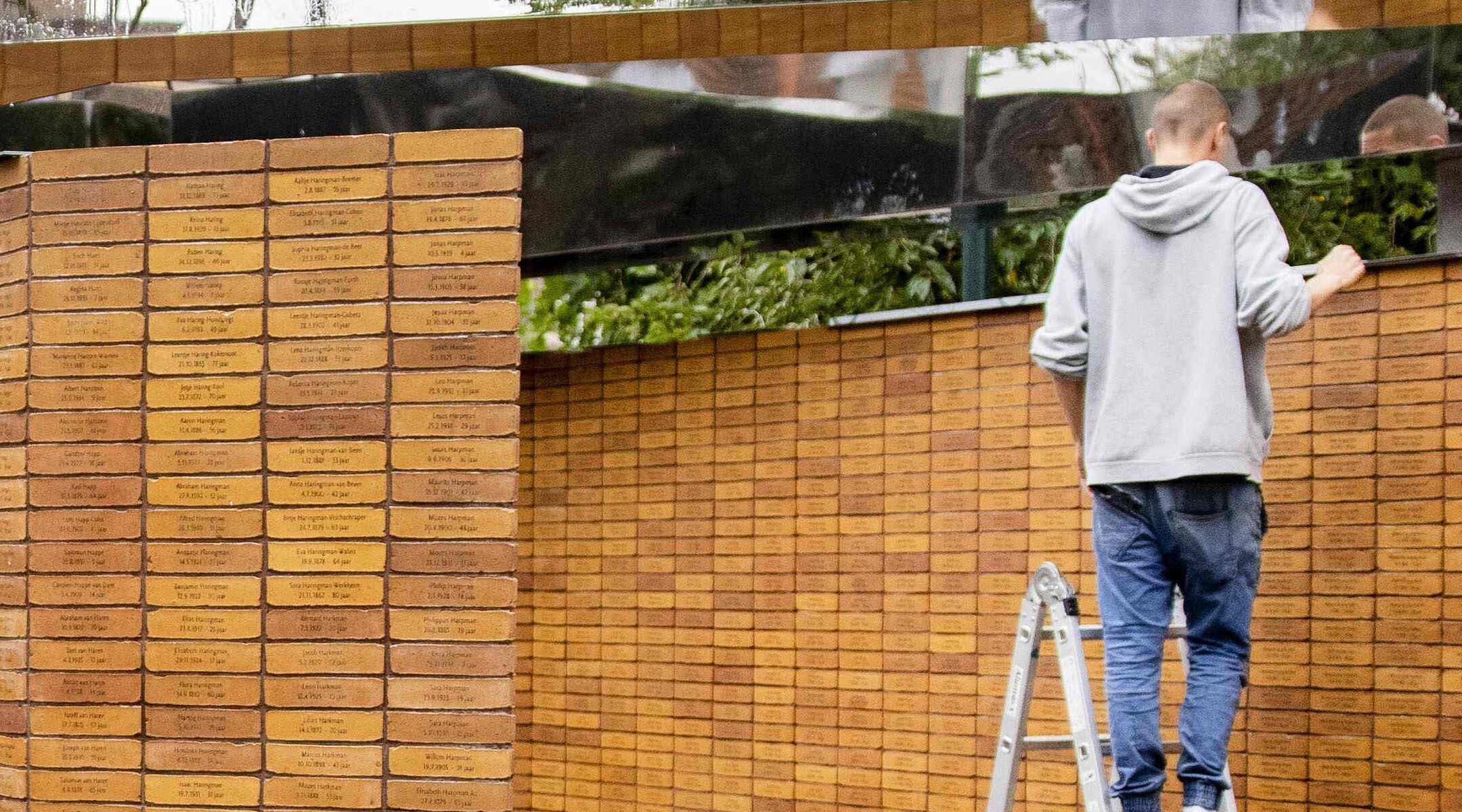 Operators prepare the Holocaust Memorial of Names for its opening in Amsterdam, the Netherlands on Sept. 2, 2021. (Ramon van Flymen / ANP / AFP) / Netherlands Out via Getty Images)
Advertisement

(JTA) — Amsterdam has a new Holocaust memorial that contains over 100,000 names of Dutch Holocaust victims and was designed by the famed Jewish architect Daniel Libeskind.

The Holocaust Memorial of Names, unveiled Sunday where it stands near the city’s Jewish Cultural Quarter, is made up of separate walls of bricks with the names of individual victims on them.

Mayor Femke Halsema, who attended the unveiling along with Prime Minister Mark Rutte and Dutch King Willem-Alexander, issued an unusual order banning neighbors from watching the unveiling from their balconies, and ordered all windows and terraces facing the square remain shuttered for security and “public order” reasons.

Relatives of victims commemorated at the monument said they were relieved to see it unveiled.

Judith Krant, a teacher, recalled to the Dutch daily Het Parool her mother’s pain at having no grave for her entire family, which was murdered at various death camps in Eastern Europe. When Krant, 55, visited Poland, her mother asked her to lay a wreath in Majdanek and Sobibor for those relatives.

“Now I can go to the Names Monument,” Krant said.

The construction followed a legal fight by some local residents who objected to the monument’s construction, citing their desire to preserve green areas in the park where the monument now stands.

Amsterdam has multiple other monuments for Holocaust victims, including the Monument to Jewish Resistance, situated on the banks of the Amstel River of Amsterdam’s former Jewish quarter.

But the Names memorial unveiling marks the end of a 15-year effort by activists and the Dutch Auschwitz Committee, a commemoration nonprofit, to erect another major memorial for the victims of the Holocaust in the Netherlands. The country lost over 75 percent of its Jewish population during the genocide.

The memorial cost about 15 million euros, or $17.4 million. The Dutch government provided more than half the funding, with the rest supplied by the municipality and private donors.