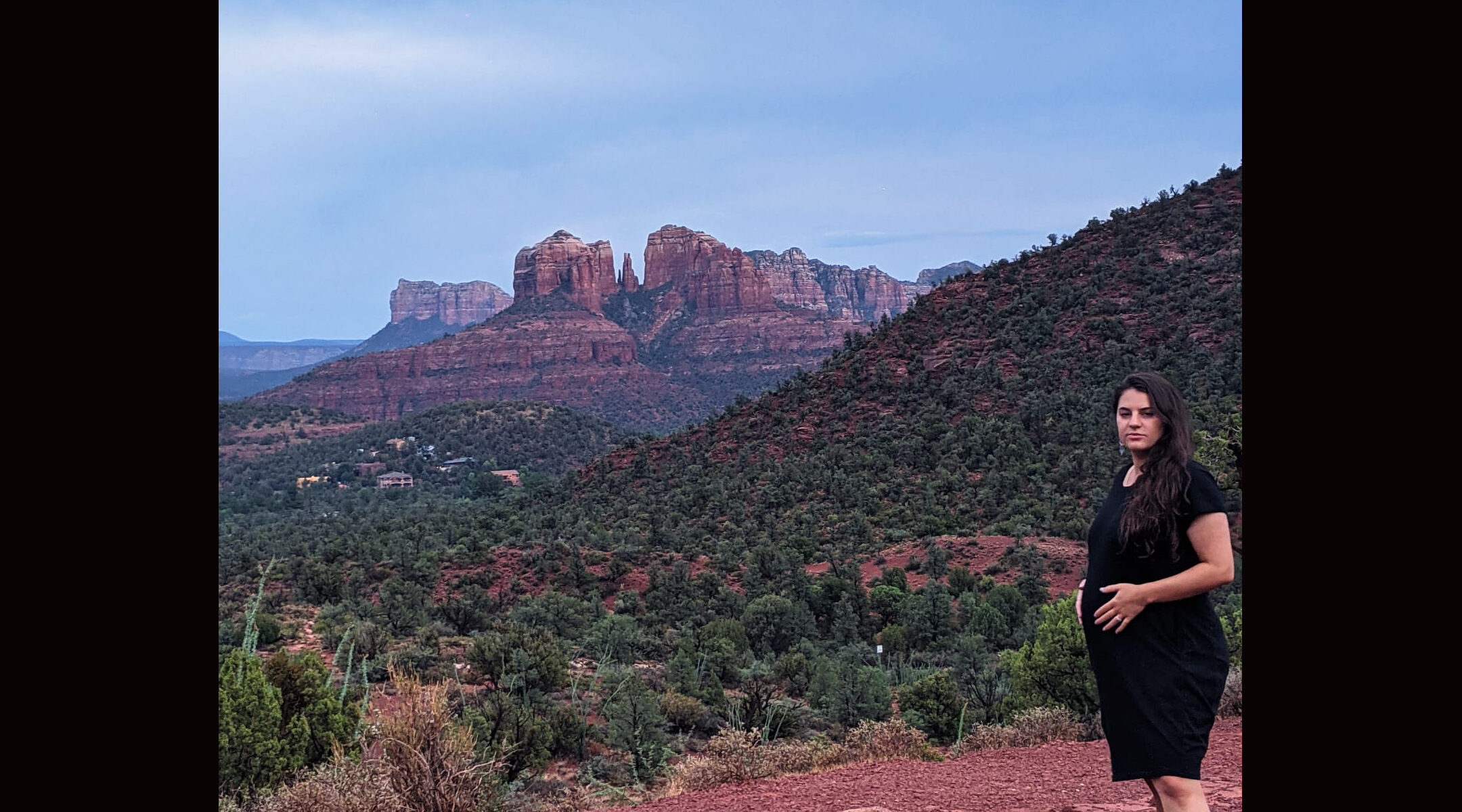 Rivka Taub Rivera, a physical education teacher at a New York City public school, began her maternity leave early to avoid having to comply with a vaccine mandate that went into effect for city teachers on Oct. 4, 2021. (Courtesy Rivera)
Advertisement

(JTA) — When Rivka Taub Rivera decided to apply for a religious exemption to New York City’s vaccine mandate for teachers, she didn’t turn to the rabbis of Borough Park, the Orthodox neighborhood in Brooklyn where she lives.

Instead, she asked Michoel Green, a Chabad rabbi who has openly opposed vaccination, to submit the required letter from a clergy member. Based in Massachusetts, Green was disaffiliated by a Chabad organization because of his anti-vaccination social media posts and has become a folk hero for some Orthodox Jews who oppose vaccines.

“I’m not going to lie, when the Chabad community, when the political establishment is going against you for speaking out and for having a unique voice, then you’re probably doing something right,” said Rivera, who teaches physical education at an elementary school in an affluent neighborhood of Brooklyn.

Rivera is part of a vocal minority of Jews arguing that their religious beliefs preclude them from being vaccinated, even as leaders within all of the major Jewish denominations have endorsed the COVID-19 vaccines.

The city education department had not ruled on her request for an exemption by Sunday, and Rivera, who is nine months pregnant, had not changed her mind about getting vaccinated. That meant she became one of potentially thousands of city teachers barred from their classrooms once the vaccine mandate, the most sweeping in the country, went into effect Monday.

The vast majority of New York City educators were vaccinated before Mayor Bill de Blasio announced the mandate Aug. 23, and most of the rest have been vaccinated since. But thousands of teachers were still unvaccinated on Friday when U.S. Supreme Court Justice Sonya Sotomayor declined to consider a lawsuit on their behalf, meaning that if they did not get their first shot over the weekend, they must either go on unpaid leave or resign with severance.

While teachers may apply for religious exemptions to the vaccine mandate, an option sought by their union, city officials made clear that they did not intend to approve them freely. Exemption-seekers are required to submit a letter from a clergy member, and a binding agreement between the city and union lays out that “requests shall be denied where the leader of the religious organization has spoken publicly in favor of the vaccine … or where the objection is personal, political or philosophical in nature.”

Those guidelines are more complicated to apply when it comes to Judaism than in some religions, such as Catholicism, where doctrine is set centrally. (The Pope has endorsed vaccination requirements.) In Judaism, major denominations issue guidelines for their members, but individual rabbis make rulings for their communities, and disagreements are common.

All of the major non-Orthodox denominations have issued statements endorsing COVID-19 vaccines, and in the Orthodox world, where public health guidelines related to COVID-19 have been more hotly debated, a list has been circulating on social media of Orthodox rabbis who have expressed opposition to vaccination either publicly or privately, including some in Borough Park. But many more Orthodox rabbis have gone on the record as endorsing vaccination, including through concerted campaigns aimed at raising vaccination rates in Orthodox communities; Yeshiva University, the flagship school of Modern Orthodoxy, is requiring its students and staff to be vaccinated.

That does not sway Stephanie Edmonds, a Jewish 10th-grade global history teacher who does not want to be vaccinated.

Edmonds was tearful on Friday afternoon as she spoke to CNN from her Bronx classroom, where she said she was about to teach what she expected would be her last class in a New York City public school. She told CNN she would be participating in a class-action lawsuit teachers were bringing against the city over the mandates.

She said she had come to the decision not to be vaccinated after much prayer, even as she said she recognized that there was no tenet in Judaism that proscribes vaccination. “I have a deeply held religious objection. I believe that this goes against my faith,” she said.

Edmonds told JTA that she was raised attending a Reform synagogue in her native Connecticut and celebrated her bat mitzvah there. She later was involved with Hillel at the University of Connecticut and lived for a semester during college in Israel, where she picked dates on a kibbutz near Eilat.

But more recently, she hasn’t been involved with a synagogue or any form of organized Jewish life — putting her in line with a large portion of American Jews. So she did not submit a letter from a rabbi in her exemption request, which is under appeal after being initially rejected. Last week, Edmonds was asked to explain her anti-vaccination beliefs in more detail during a hearing for her appeal, an experience she said she did not appreciate.

“I don’t feel like I should have to justify my religious practices in front of a panel or in front of the public,” she said.

Rivera, who grew up Hasidic but now prefers mainstream Orthodox synagogues, said she had no objections to explaining her resistance to being vaccinated in Jewish terms, although she said her objections run deeper than that. She said she knew people who had become seriously ill because of COVID-19 — and of people she believed had been saved after receiving treatments that were discredited by the medical establishment, including the drug cocktail promoted by a Jewish doctor named Vladimir Zelenko.

“In Torah law you’re not permitted to inject yourself with a vaccine that offers no significant medical curative benefit to the patient, even if it’s allegedly good for others,” she asserted. “We’ve been told to get this vaccine because you know it’s for the greater good, yet you can still get and transmit COVID. I don’t think Hashem would want me to sacrifice my bodily autonomy for this.”

Even rabbinic leaders in the denomination in which Green was ordained, Chabad, depart from that position. Rabbi Yehuda Sherpin, who writes a column on Jewish law for Chabad.org, noted that Torah requires individuals to take life-saving measures, like vaccines, in times of plague. “Guarding your own health doesn’t only make sense, it’s actually a mitzvah,” he wrote in a column, “What Does Jewish Law Say About Vaccination?,” that does not directly address COVID-19. “That means that even if you don’t want to do it, for whatever reason, you are still obligated to do so.”

Rivera said she had COVID-19 this spring and felt confident that she is protected by antibodies she developed in response to that infection, citing the guidance of a local doctor whom she said declined to write a letter endorsing a medical exemption because of fears of retaliation. The position that previous exposure to COVID-19 can serve as sufficient protection from the virus is widely held in many Orthodox communities, which were hit early and hard during the pandemic last year; Orthodox media outlets have been pressing the de Blasio administration for natural-immunity data.

“It hasn’t been a pandemic in Borough Park for the last year,” Rivera said.

Rivera also said she was nervous about how the vaccine would affect her unborn child. The Centers for Disease Control is exhorting those who are pregnant to be vaccinated, citing a high incidence of complications among pregnant patients who contract COVID and the data showing the safety and efficacy of the vaccine. Only about a third of pregnant people are vaccinated, reflecting widespread anxiety and misinformation about the vaccines’ effects on fertility. Those concerns have been especially prevalent in Orthodox communities, where fertility is prized; in response, several Orthodox rabbis in Long Island and Baltimore emphasized that the vaccines have had no observable negative effect on fertility when they collaborated on a Rosh Hashanah video this year encouraging their communities to get vaccinated.

For now, she is sidestepping the vaccine mandate by starting her maternity leave early. The teachers union recently negotiated paid leave for educators, so she’ll be paid for six weeks and then be able to take vacation for another six. At that point, she said, she hopes the mandate will be relaxed, either because the pandemic has waned or because a new mayor takes office and lifts the vaccine requirement. (Eric Adams, who is likely to win November’s mayoral election, has not spoken in detail about vaccine mandates but said in August, prior to the mandate for teachers, that he thought de Blasio was “going in the right direction” on the issue.)

If the mandate remains in effect, Rivera said she doesn’t know what she’ll do. She really doesn’t want to be vaccinated, but her husband is currently without income after closing his kosher restaurant, a fried-chicken joint called Krispy Nuggets, because he could not hire enough workers.

That was before de Blasio announced that vaccination would be required for people eating in restaurants in the city, a mandate that has put pressure on kosher restaurants whose clientele include a substantial portion who oppose vaccination. “It might have been a blessing in disguise honestly because we would have never enforced segregation,” she said.

Rivera said some of the other Jewish public school teachers she knew who had not wanted to be vaccinated had gotten the vaccines in recent weeks, as it became clear that they would need to do so to keep being paid. She said she also knows teachers working in yeshivas in Brooklyn who have not been vaccinated.

“For the most part the other Jewish educators that I know are in private school,” she said. “And this isn’t really hanging over their heads like it’s ours.”