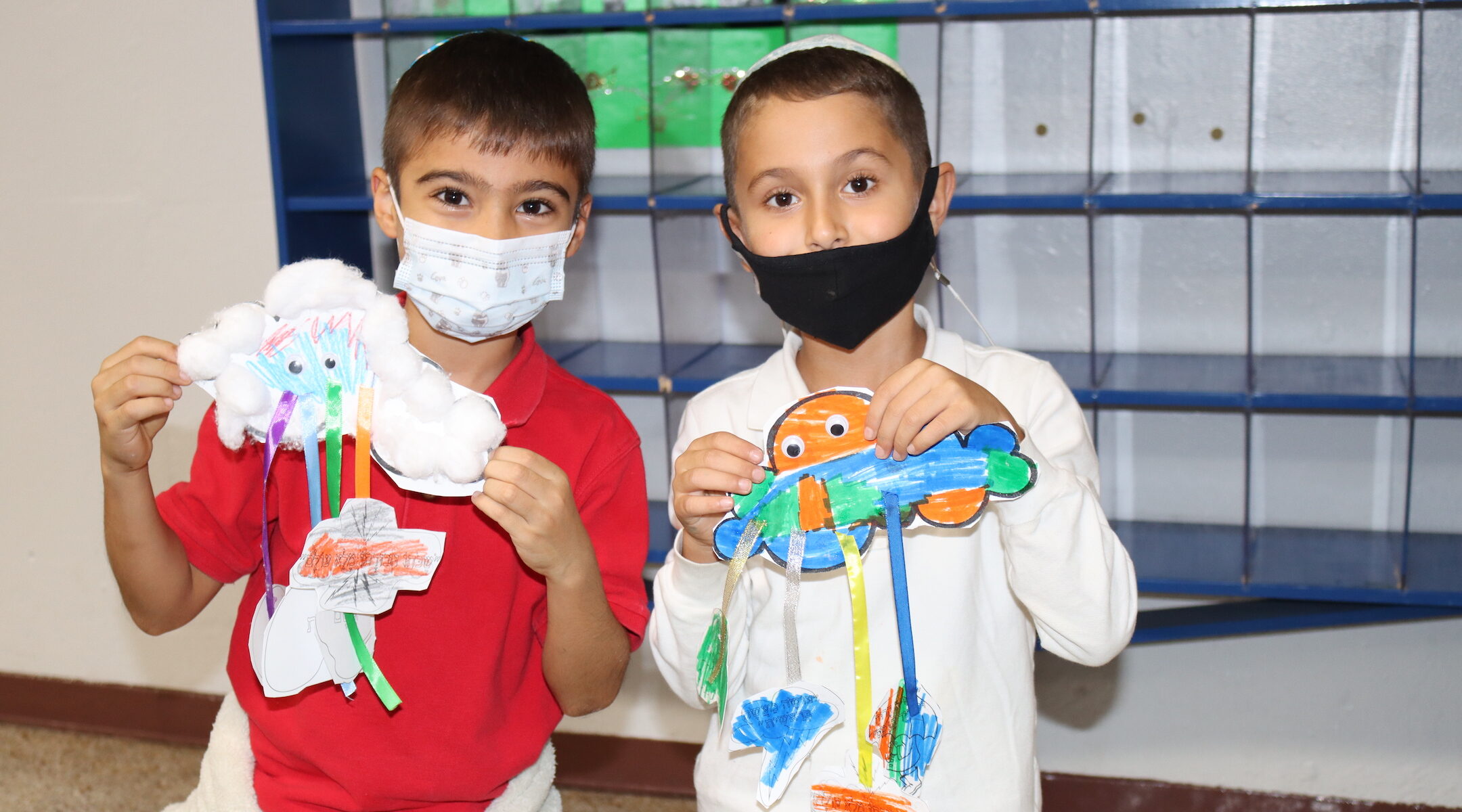 Students at the Yeshiva of Central Queens show off the clouds they created in a project learning about the importance of rain. The current month of Cheshvan on the Jewish calendar is the traditional beginning of the rainy season in the Land of Israel. (YCQ)
Advertisement

Shabbat shalom, New York. If you prefer to hold The Jewish Week in your hands, we send out a weekly, downloadable, printable digest of the week’s best stories. Sign up for “The Jewish Week/end” here. Get today’s edition here.

“OFFENSIVE AND WRONG”: New York Democrats Mondaire Jones and Jerry Nadler condemned the D.C. branch of a youth environmental movement that refused to march in a voting rights rally with groups that support Israel.

MONEY FOR SECURITY: New York State reopened the grant application period for nonprofits at risk of hate crimes; go here for information about the application, which must be submitted by Jan. 7, 2022.

BLESS THIS MESS: In 1860, Rabbi Morris Raphall of New York’s B’nai Jeshurun was the first rabbi to lead Congress in prayers in 1860. A recent book, “When Rabbis Bless Congress: The Great American Story of Jewish Prayers on Capitol Hill,” profiles Raphall and the 440 rabbis who followed. (j.)

CHEESECAKE VICTORY: A federal appeals court ruled that Michigan prisons must serve cheesecake and other dairy foods to Jewish prisoners on the holiday of Shavuot. (The Forward)

“THE STRANGER WHO RESIDES WITH YOU”: The  Garden City Jewish Center on Long Island is helping resettle a 20-member Afghan family who recently arrived in New York, providing furniture, bedding, household items and money for food. (Garden City News)

ONLINE FUROR: The story of the Jewish teacher in Montclair, New Jersey who asked a Muslim girl to push her head covering off of her face keeps spiraling and spiraling. (New York Times)

Rabbi Baruch Saks, who served as the magid shiur – a revered Talmud teacher – at the Yeshiva of Staten Island for over half a century, and was the rabbi of the Zeirei Agudas Yisrael minyan in Borough Park for many years, died Monday. More recently he was the  rabbi of the Pine River Village Nusach Sefard Minyan in Lakewood, New Jersey. (Hamodia)

Did Abraham fail God’s test when he was asked to sacrifice his son Isaac? Rabbi Jill Hausman of the Actors’ Temple in Manhattan says this week’s Torah portion is a case study of how loved ones learn to trust one another.

What do Zach Hyman, Jack Hughes, Adam Fox, Jason Zucker and Josh Ho-Sang all have in common?

YM & YWHA of Washington Heights & Inwood presents an in-person screening of the first episode of “The New Jew,” followed by a conversation and Q&A with series creators Guri Alfi, Asaf Nawi and Moshe Samuels. “The New Jew” is a four-episode TV documentary series showcasing the cultural and political influence of the Jewish community in the United States from the perspective of a secular Israeli comedian. $10. For trailer, details and tickets, visit here. Sunday, 5:30 p.m.

Photo, top: Students at the Yeshiva of Central Queens show off the clouds they created in a project learning about the importance of rain. The current month of Cheshvan on the Jewish calendar is the traditional beginning of the rainy season in the Land of Israel. (YCQ)