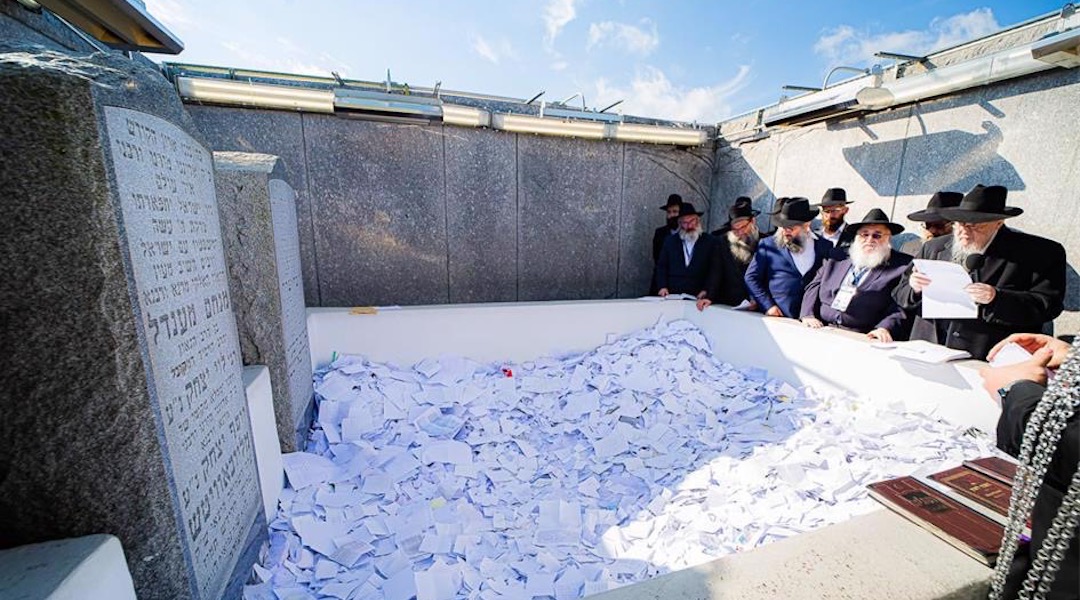 Rabbi Moshe Kotlarsky reads a collective prayer request on behalf of the thousands of rabbis of the Chabad-Lubavitch hasidic movement who visited the Queens Ohel, or grave, of Rabbi Menachem M. Schneerson, the movement’s late Rebbe, during a four-day gathering of Chabad emissaries, Oct. 31, 2021. ( Chaim Tuito/Kinus.com via Chabad.org)
Advertisement

Today is the first Monday following the city’s vaccination mandate for almost all municipal employees; vaccination rates for those covered by the new mandate jumped from 71% on Oct. 19 to 86% on Sunday, Gothamist reports.

FIRING BACK: In his first public comments since being fired from Park East Synagogue two weeks ago, Rabbi Benjamin Goldschmidt defended himself against charges of an “insurrection” and illegal activity and said his supporters’ motive “was to help build a growing, thriving, vibrant, and young community.” (Jewish Week via JTA)

PRO AND CON: Our Jewish Week colleagues, Ben Sales and Andrew Silow-Carroll, visited the new Jewish Museum exhibit on art looted by the Nazis and came away with different impressions. (Jewish Week via JTA)

THE THINGS THEY CARRIED: New Yorker Arthur Kurzweil, an author and genealogist, has a collection of about 4,000 dreidels and other ritual objects, in a private collection that paints a unique portrait of everyday Eastern European Jewish life before the Holocaust. (JTA)

ELECTION DAY EVE: Rabbi David Niederman, head of the United Jewish Organizations of Williamsburg, is urging fellow members of his branch of the Satmar movement to vote for Eric Adams and other Democrats in tomorrow’s mayoral election. (Politico)

IN TOWN: Yehuda Garami, chief rabbi of Tehran’s small Jewish community, visited with Chabad leaders in Queens and Crown Heights as the Hasidic movement hosted thousands of its worldwide emissaries for an annual convention. (collive)

Commonpoint Queens presents a virtual talk by Gwen Strauss, author of “The Nine: The True Story of a Band of Women Who Survived the Worst of Nazi Germany.” She’ll discuss the story of nine women under 30 who joined the resistance during World War II and eventually became a close-knit group of friends. $8 members/$10 non-members. Register here. Noon.

Correction: Friday’s newsletter incorrectly identified Chesa Boudin, the district attorney of San Francisco and son of the former ’60s radical David Gilbert. Boudin is a man, not a woman.

Photo, top: Rabbi Moshe Kotlarsky reads a collective prayer request on behalf of. thousands of rabbis of the Chabad-Lubavitch hasidic movement who visited the Queens Ohel, or grave, of Rabbi Menachem M. Schneerson, the movement’s late Rebbe, during a four-day gathering of Chabad emissaries, Oct. 31, 2021. (Chaim Tuito/Kinus.com via Chabad.org)