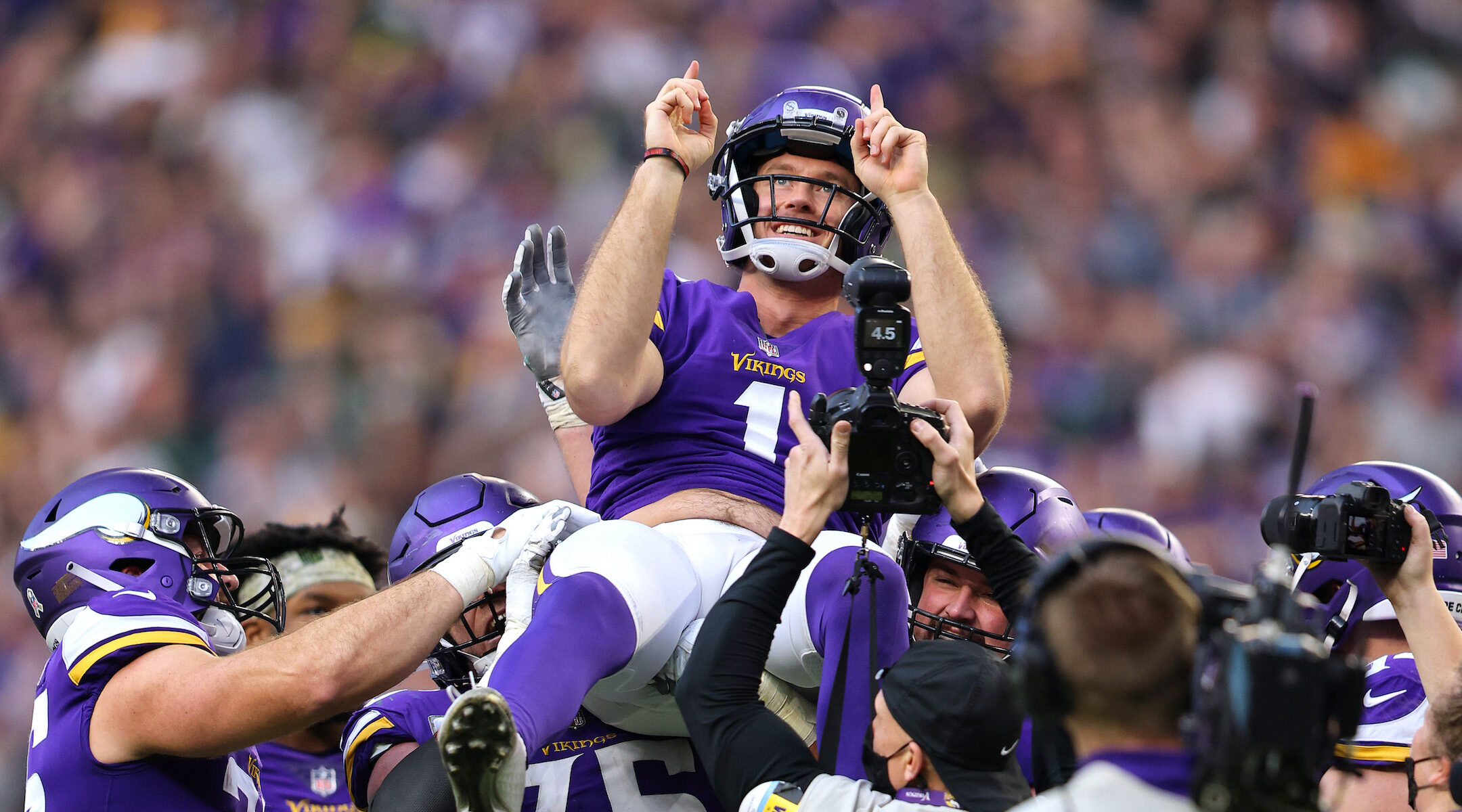 (JTA) — The only Jewish kicker in the NFL for years now, Greg Joseph is used to how mentally taxing the position can be. On Sunday, he found himself in another one of its do-or-die situations.

With two seconds left to go in a tied game against the division-leading Green Bay Packers on Sunday, Joseph kicked his Minnesota Vikings to victory with a 29-yard field goal, keeping the team’s playoff hopes alive. He was carried off the field by his teammates.

Joseph, who attended Jewish schools in Florida after immigrating from South Africa, said he deals with the pressure of being a kicker by working on having “confidence and faith in my abilities.”

Joseph’s kick Sunday night harkened back to a similar moment three years ago, when he kicked a game-winner for the Cleveland Browns in only his third game as a pro — hours after affixing a mezuzah to the doorpost of his apartment.

Since then, the 27-year-old’s career as one of the league’s handful of Jewish players has been a rollercoaster ride, ranging from the lows of being released by multiple teams in a year to the highs of a steady starting role. This season, he is the starting kicker for the Minnesota Vikings, making 84% of field goal attempts so far on a team trying to claw its way to a playoff spot.

Through it all — five teams in three years — he has remained engaged in the local Jewish communities of the cities he has traveled through. In Cleveland, he showed up to a 5-year-old’s birthday party at a Jewish school and put up his mezuzah with the help of a local Chabad-Lubavitch rabbi. Last year on the Tampa Bay Buccaneers, he joked, “I think we had a league-leading three Jews on one team” — himself, quarterback Josh Rosen and offensive lineman Ali Marpet.

“That sense of community, no matter where I’ve been, you have people reach out and offer their support — Shabbat dinners, anything you need, home cooked meals. … Just all because they hear I’m Jewish, which is pretty crazy, because they don’t even know me that well, and I don’t even know them at all,” he told JTA. “I’ve always thought that’s a cool aspect of the community and support system that it brings.” 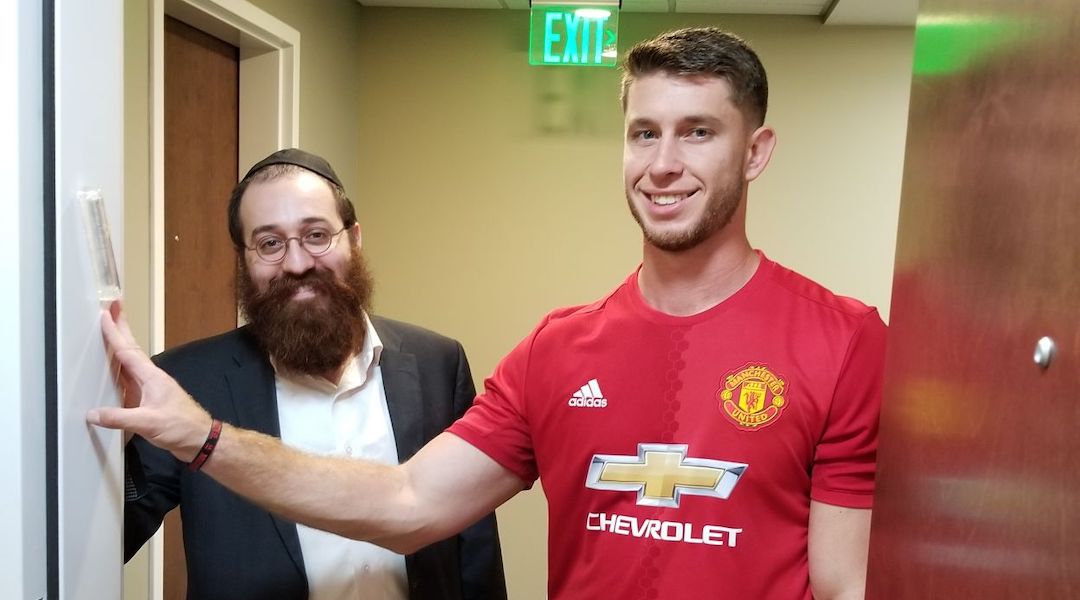 Joseph with Rabbi Yossi Friedman of the Chabad of Downtown Cleveland in 2018, standing by the mezuzah that Friedman helped Joseph put up outside his apartment. (Glen Joseph)

NFL kicker might not sound like the natural goal for a Jewish kid born in South Africa, on a continent obsessed with the other “football.” His first dream was in fact to go pro in soccer — specifically to play for his beloved Manchester United club, and “follow in David Beckham’s footsteps.” (He wore a Man United jersey to his post-game conference this week.)

His family moved from Johannesburg to Boca Raton, Florida, when he was 7 years old. Most of what he remembers of his early childhood in South Africa centers around Sydenham Shul, the congregation his family belonged to and where he attended day school with his two brothers.

“Growing up in South Africa, I remember having a pretty decent-sized Jewish community and going to shul every Saturday with my parents,” he said. “My whole upbringing is pretty based around religion and sports, essentially.”

But those two worlds rarely overlapped for Joseph in the United States, where he attended the Donna Klein Jewish Academy day school until ninth grade.

“When my soccer became more serious and I played travel soccer, I was usually the only Jewish kid out there, or one of two. And same when I started playing football,” he said.

The exceptions were the Maccabiah Games, held every four years, known as the “Jewish Olympics.” He played soccer with the Boca Raton delegation, participating in junior Maccabiah games in Baltimore, San Diego and Israel.

“I had a good time each and every time, getting to see different parts of the country, and meeting up with so many other Jewish athletes that you end up keeping contact with for years after,” Joseph said.

Getting to travel to Israel for his last Maccabiah Games is a cherished memory.

“I love Israel, it’s beautiful. To everyone that will listen to me, I tell them they need to go visit at some point. It was an awesome experience,” he says. “At that point it becomes bigger than the sport — it’s about connection and discovery and learning, and making lifelong relationships with people the same religion” as you.

He switched to American football extremely late in the game — during his senior year at American Heritage School in Delray Beach, Florida.

“I got tired of running,” he joked. The real story, he said, was a more pragmatic.

“I realized that in this country there’s more of an opportunity to get a scholarship and go professional in American football as opposed to soccer,” he said. “I looked at both options, it was at that time where kicking was new to me — it was exciting and something I wanted to pursue.”

After attending Florida Atlantic University in Boca Raton on a football scholarship, Joseph was not selected in the 2018 NFL Draft but was signed as a free agent by the Miami Dolphins — then was released at the start of the season. The Cleveland Browns quickly signed him, and he made his first game-winning field goal in the fifth week of the season. Throughout the season, his NFL debut, he made 17 of his 20 field goal attempts, and 25 of 29 extra points. 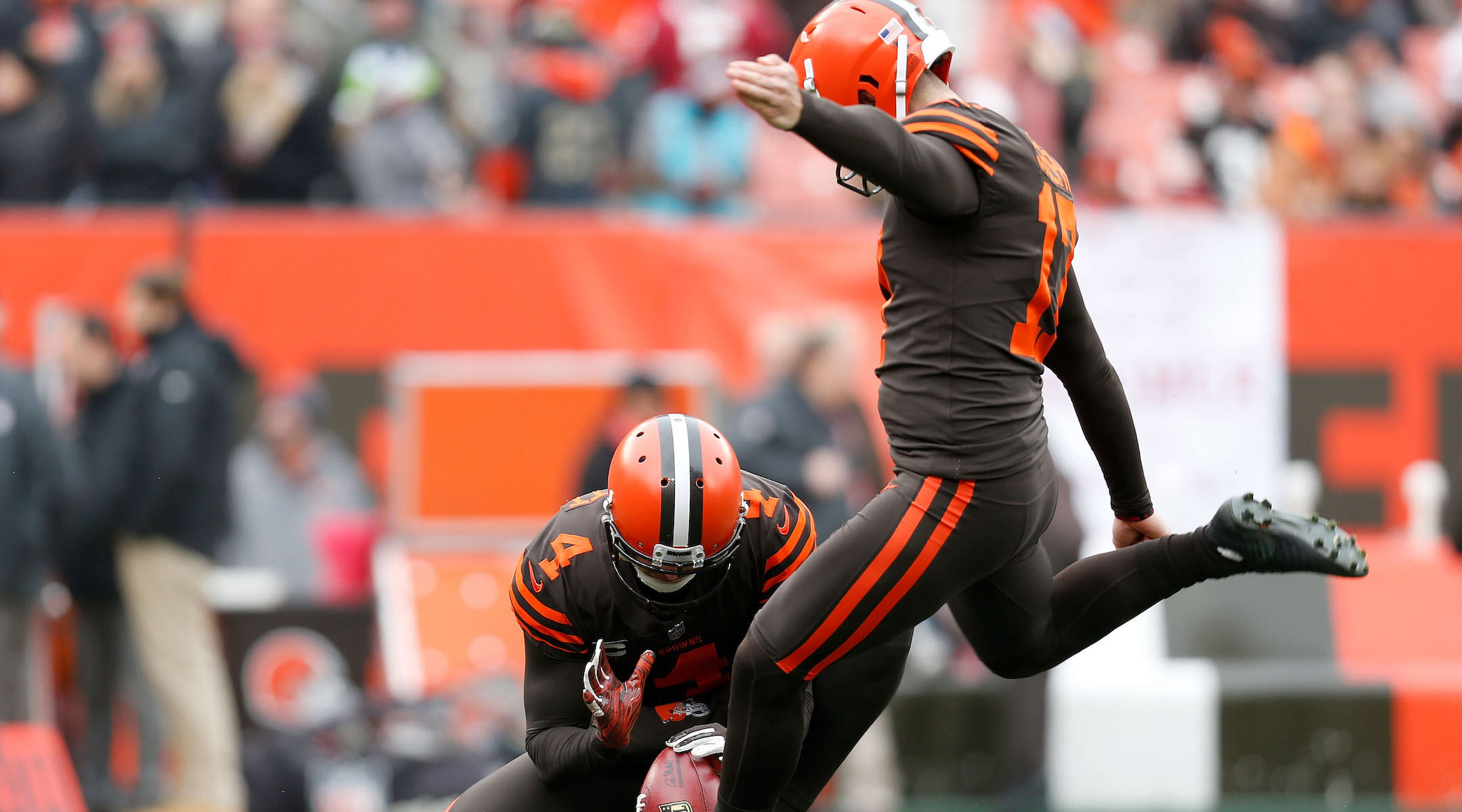 Greg Joseph practices as a member of the Cleveland Browns at FirstEnergy Stadium in Cleveland, Dec. 23, 2018. (Kirk Irwin/Getty Images)

Still, the Browns released Joseph ahead of the 2019 season. After a brief stint with the Carolina Panthers, he joined the Tennessee Titans practice squad, playing five games, before moving to the Tampa Bay Buccaneers practice squad. In February 2021, he finally landed in Minnesota.

In Tennessee, he became close with Jewish tight end Anthony Firkser, who also played in Maccabiah tournaments. In the wake of the DeSean Jackson antisemitism controversy, Joseph participated in a panel alongside Firkser and other Jewish players Mitch and Geoff Schwartz about educating NFL players.

Despite the fallout around Jackson’s infamous Instagram post — in which the then-Philadelphia Eagles receiver posted quotes attributed to Adolf Hitler — Joseph said he never feels singled out as a Jew in the NFL. The support from the Jewish community he has felt in each of his teams’ cities is proof, he said.

But it’s his family, Joseph said, that’s the “best support base” he has — with their backing coming at times in the form of Jewish food.

“Probably no one will ever beat my grandma’s matzah ball soup,” he said.