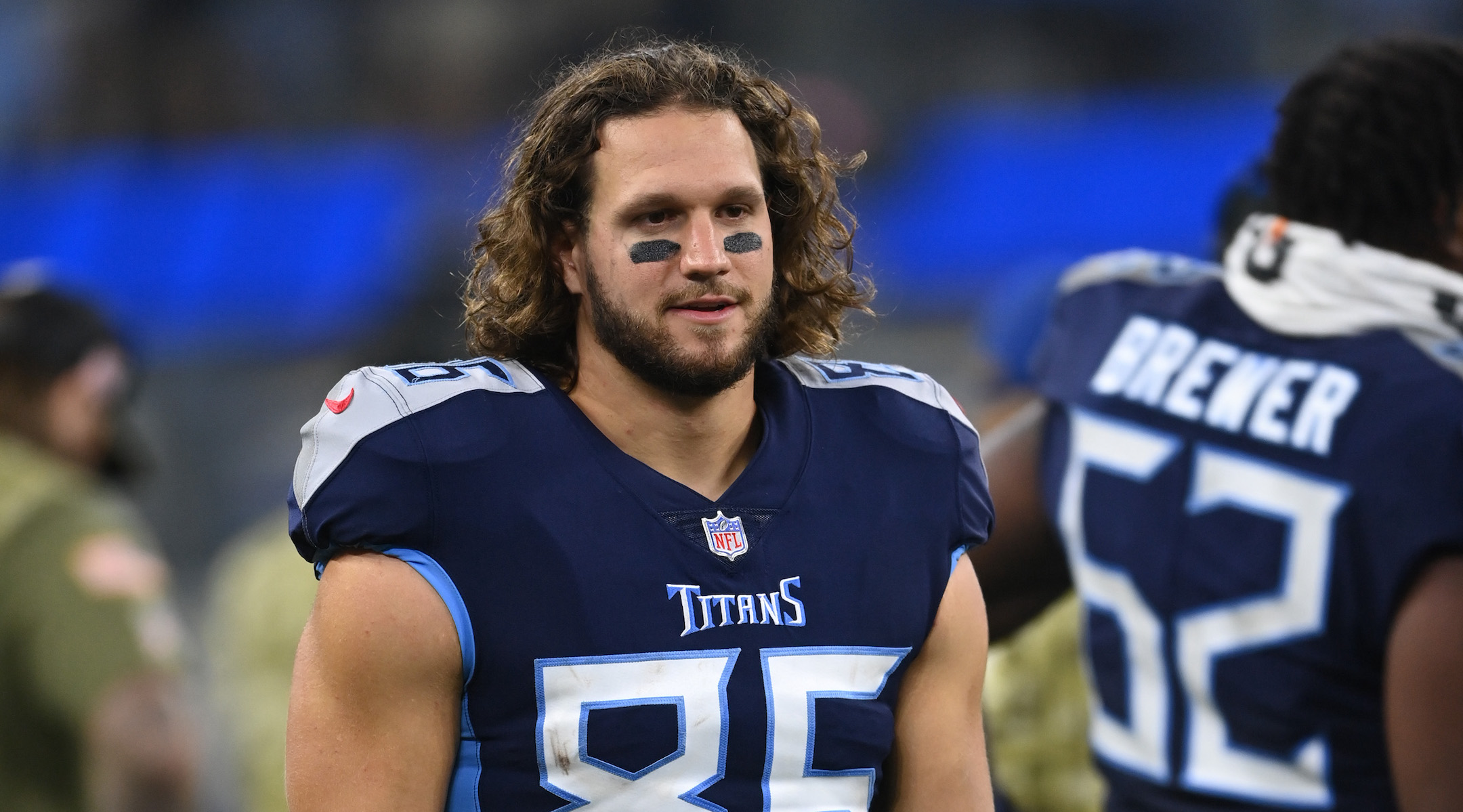 Anthony Firkser on from the sidelines during a game against the Los Angeles Rams at SoFi Stadium in Inglewood, Calif., Nov. 7, 2021. (Jayne Kamin-Oncea/Getty Images)
Advertisement

(JTA) — Anthony Firkser didn’t start playing football until his sophomore year of high school. That may not sound strange for the average person — but for someone who is now a professional NFL player, it’s a much later start than most of his peers.

The reason? His Jewish mom, wary about the dangers of the game.

Though his parents Alex and Donna are now supportive of his career, his mom is still “always watching documentaries, and that makes it worse for her — on all the concussion stuff.”

“But they’re happy for me, and very supportive, and they try to make as many games as they can to be there for me,” Firkser told the Jewish Telegraphic Agency.

Despite the familial fears, Firkser, 26, has forged a quietly steady career as an NFL tight end. He has started at times for the Tennessee Titans, the team he has played for since 2018.

He’s also one of the league’s very few Jewish players. He hasn’t experienced any antisemitism in the NFL, but he said he is often the first Jewish person some of his teammates have ever met.

“It’s cool to talk about…  to share a little bit different background than a lot of guys are used to in the league” Firkser said. “Guys get to learn about [Judaism] who have never kind of experienced it.”

Last year, in the wake of DeSean Jackson’s antisemitic comments, Firkser and a few other Jewish football players spoke out publicly about being Jewish. Firkser was one of nine Jewish NFLers who participated in an online conversation about Jews and professional football. In the wake of the controversy, Firkser became an ambassador for Unity Through Sport, a non-profit dedicated “to using sports as a vehicle to take a stand against discrimination and hate in our society.”

“Unity Through Sport is an initiative trying to bring everyone together. It’s kinda like a locker room where no one sees any differences,” Firkser says. “We’re all working towards a common goal. That was something good to stand behind and be able to use my Jewish background as something that could be seen as different that people don’t understand, but show them how similar it all is.”

Firkser was raised in Manalapan, New Jersey, where he attended Hebrew school growing up and had a bar mitzvah.

“We had a bunch of bar mitzvahs and bat mitzvahs in the family, always a good time,” he said. “We celebrate the main holidays — Hanukkah, Passover, we try to get together to spend time together.” 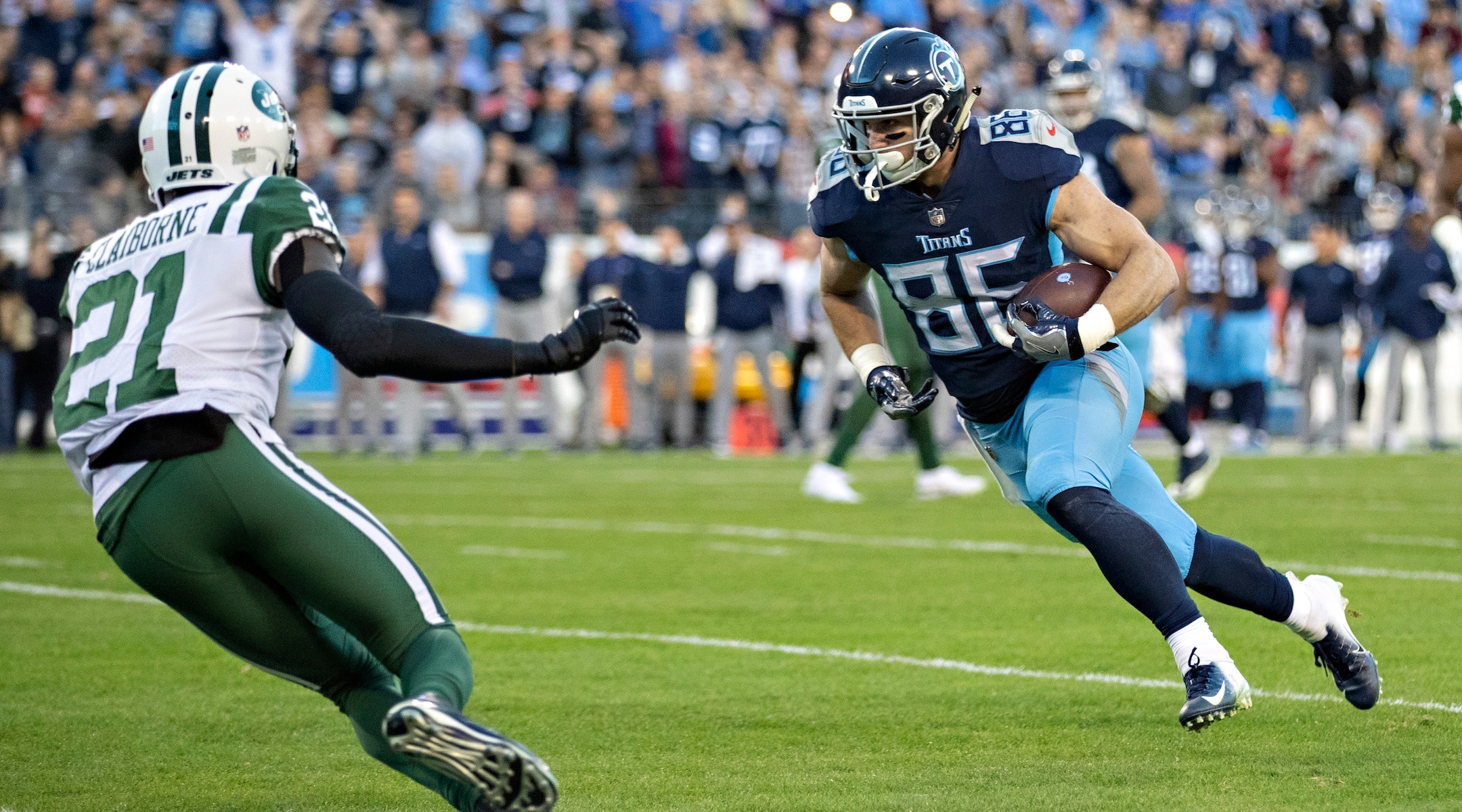 Anthony Firkser runs a pass in for a touchdown during a game against the New York Jets at Nissan Stadium in Nashville, Dec. 2, 2018. (Wesley Hitt/Getty Images)

One of the Jewish highlights of growing up was playing in the Maccabiah Games in 2013 — the international competition for Jewish athletes — in basketball.

“I got to go to Israel for three weeks, do a bunch of sightseeing and spend time with other Jewish athletes. To get to learn more about them and their backgrounds and traditions, it was a cool experience all around to learn about the religion and the heritage and Israel as a whole,” he said.

The Maccabiah Games was also the last organized basketball tournament he played in. At Manalapan High School, he was a multi-sport athlete — playing basketball, ice hockey, and, eventually, football. He decided to focus on football, though he never thought he would ever play professionally.

“I always had hopes and dreams, but it felt like something that was such a long shot,” Firkser said. “Every kid has those dreams of playing sports. I didn’t set too high of goals, and took it one step at a time.”

He was recruited to play for Harvard — not exactly an NFL feeder school. Firkser is one of five Harvard football players on an active NFL roster, and one of 12 total to play at an Ivy League school.

“In college, seeing guys ahead of me get those opportunities [to play in the NFL], it started to become a little more realistic in my eyes,” he said. “My sophomore and junior year, I was playing a lot more, and started focusing on how I could make it to that next level.”

Firkser was not drafted when he graduated, but he signed with the New York Jets as a free agent in May 2017, only to be released in September. Two months later, the Kansas City Chiefs signed him to their practice squad, offering a future’s contract in January 2018, but then released him in April 2018. The Titans signed Firkser as a free agent in May 2018, and he made it onto their active roster in October of that year.

His rocky road to playing time was hard.

“The speed is definitely different,” he said about college versus the pros. “The type of athletes that are there — the size and strength that you’re going against is just a lot different.”

He made his NFL debut in September 2018, and scored his first-ever career touchdown in December 2018 against the Jets. Last year was a standout season for Firkser — he appeared in all 16 regular season games for the Titans.

A career highlight came in the postseason, in a 2020 playoff game against the New England Patriots, when Firkser scored a touchdown on the Titans’ opening drive.

Going back to New England for that playoff game was meaningful for him.

“I had a bunch of family there, a bunch of college buddies come in,” Firkser remembers. “A cool experience to have them all there, and be able to share that with them and know that they’ve supported me along the way and got to experience that together.”

“Being able to go against Tom Brady and that team and have some significant plays was definitely something I’ll always remember,” he added.

Firkser hasn’t come across many other Jewish players in the NFL, but he did play with Greg Joseph, a Jewish kicker who was on the Titans in 2019. They bonded over being “able to share similar experiences.”

“You get a little stronger connection, coming from that same background and having those same traditions,” Firkser said of Joseph. “He did stuff with Maccabiah [Games] as well in soccer, so we got to share stories about that.”

Looking ahead to Hanukkah, Firkser normally tries to celebrate with family. He’s a big fan of latkes — which he pronounces in old-school fashion, like “lat-keys.” (He also loves matzah ball soup, even though that staple is associated with a different holiday.)

“I’ll light some candles,” Firkser says. “We’ll do something, to keep that tradition [going].”

The Titans play the Patriots in Foxborough — a mere 45 minutes from Harvard’s campus — on the first night of Hanukkah, Sunday Nov. 28. So he’ll get to be at one home of sorts for the holiday after all.