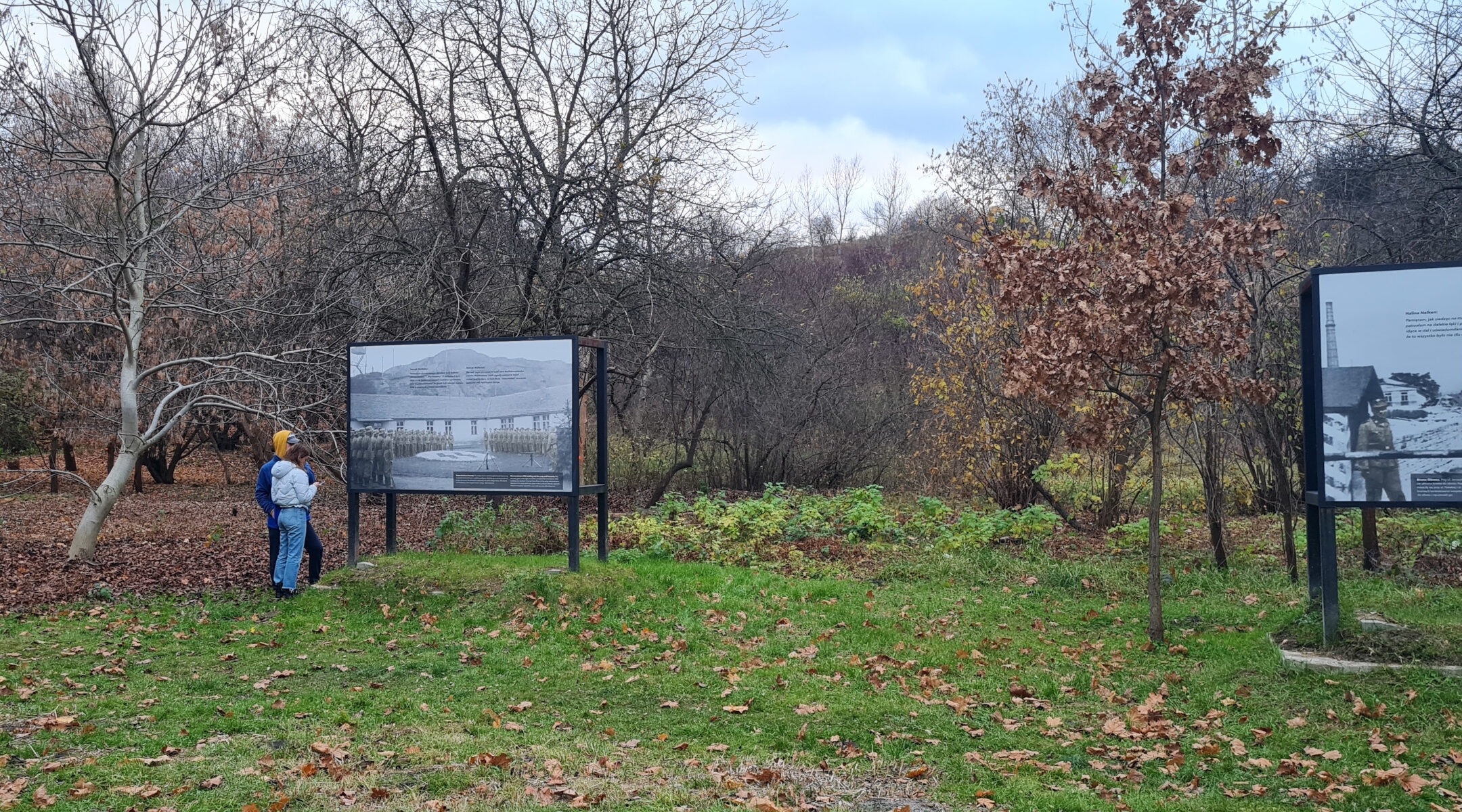 Visitors examine signs at to the former grounds of the Plaszow concentration camp in Krakow, Poland, Nov. 8, 2021. (Cnaan Liphshiz)
Advertisement

KRAKOW, Poland (JTA) — The concentration camp that the Nazis built in the heart of this picturesque city was “the innermost circle of hell” to Holocaust survivor Leon Leyson.

Executions at Plaszow, where prisoners who worked for Oskar Schindler had lived, occurred publicly and daily. The camp commandant, Amon Göth, was a notorious sadist who would shoot prisoners at random or set dogs loose on them, Leyson wrote after World War II.

Leyson, one of the hundreds of Jews saved by Schindler, a German industrialist, survived Plaszow as a boy. Yet his “first impression of Plaszow as hell on earth never changed,” he wrote in the book, published after his death in 2013.

Today, the former grounds of Plaszow mean different things to the local population: It has become a recreational area where joggers take their dogs out and where picnics are held, in what is one of the last remaining wild green spaces in a rapidly gentrifying city.

These contrasting visions of Plaszow are now at the center of a debate about a plan to turn the hilly area, which is thick with vegetation and still contains the ruins of the concentration camp’s facilities, into a $12 million educational and commemoration center.

The plan was unveiled last summer with the support and involvement of the Jewish Community of Krakow, a nonprofit promoting communal interests. Earlier this month it prompted a protest in Plaszow over the felling of about 500 trees to make room for a complex of buildings along the southwestern edges of the 90-acre area.

The protesters said they do not oppose the construction of a museum per se, but object on environmental grounds.

“Such things should not be happening in an academic hub in the heart of Europe in the midst of climate crisis, during the COP26 global climate summit,“ Maciej Fijak, a leader of the protest, wrote on Facebook on Nov. 6. That weekend, 200 activists gathered on the site of the planned museum.

“The bigger picture is that in recent years, the city has cut 50,000 trees, each time felling a small amount,” Fijak told the Jewish Telegraphic Agency.

The vegetation, which has grown wild around the remains of the camp buildings during decades of neglect, is only part of the allure of the area, which locals refer to as KL Plaszow (KL is short for Konzentrationslager, concentration camp in German).

The grounds attract diverse visitors, including picnickers, treasure hunters and the homeless. Some light bonfires and litter the place with plastic utensils and empty bottles, according to an expose published last month in Gazeta Wyborca, a Polish daily.

“The area of ​​the former KL Plaszow turned into a garbage dump,” the headline read. 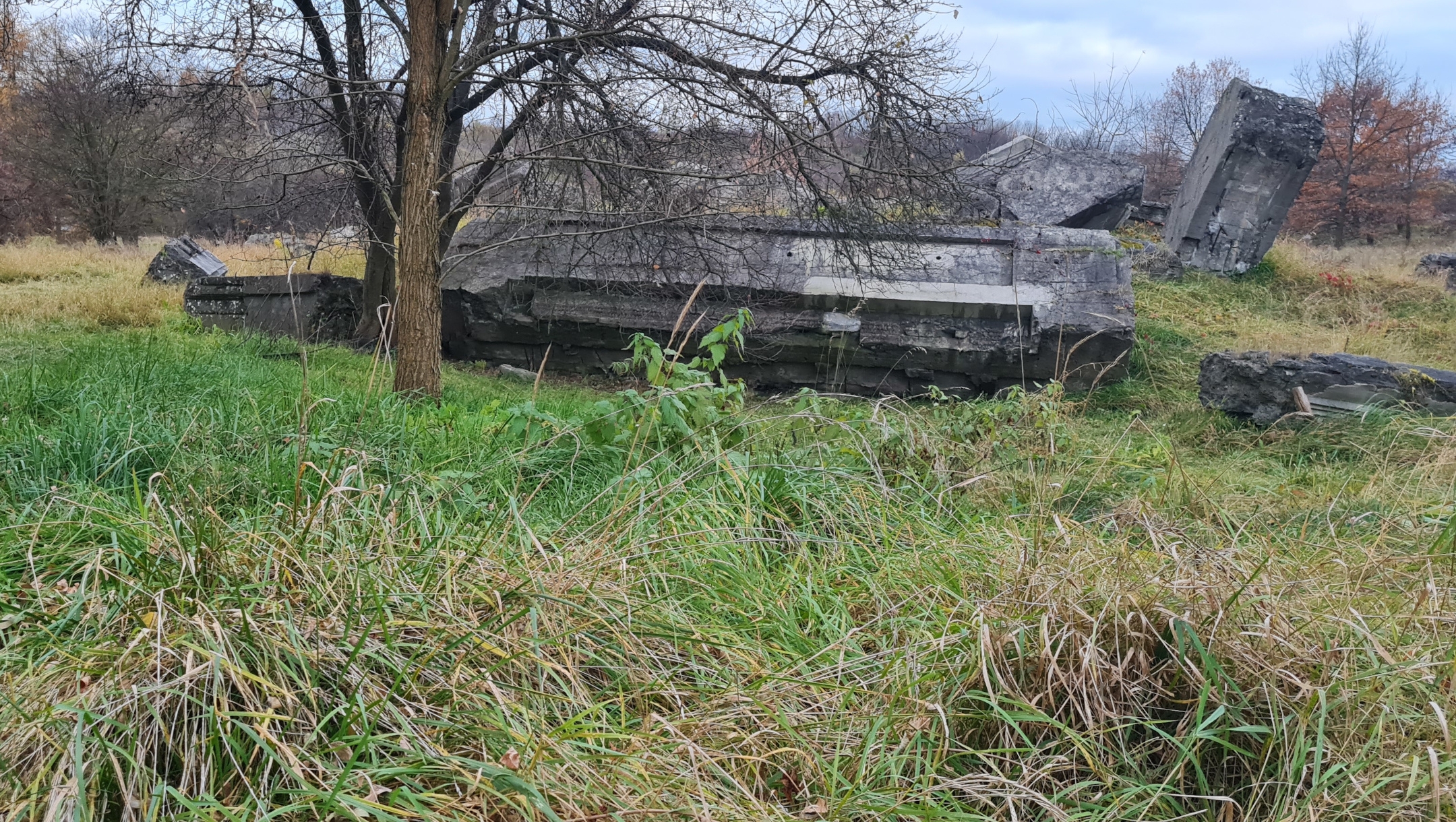 Thick vegetation grows amid the ruins at the former grounds of the Plaszow concentration camp. (Cnaan Liphshiz)

On a recent Sunday, “a large group of residents went jogging on the site of the former Nazi concentration camp. Others came for a walk with the children. Some people also walked their dogs,” the authors wrote. “There are piles of waste in the caves near the former quarry (some left by the homeless),” they added.

They reported seeing discarded diapers, food cans, ketchup wrappers and scraps. “Someone deliberately threw a bag out of a moving car. The garbage landed literally a few meters from the ruins of a former Jewish cemetery,” they wrote.

The city has promised to leave some green areas at the site, building mainly along the edges of the compound.

The protest is about regulation at Plaszow, according to Edyta Gawron, a prominent Krakow-based scholar specializing in Polish-Jewish history. She believes that the city’s plan for the museum is a workable and fair compromise.

“In my opinion, the protesters are afraid of losing this green space, to which they have access without any limitations or responsibility,” she said. “They’re afraid that this will be somehow fenced, guarded. And they don’t want it to become a tourist attraction.”

That’s a prospect made likely by the connection to Schindler, made famous by Thomas Keneally’s 1982 book “Schindler’s Ark” and Steven Spielberg’s 1993 film version, “Schindler’s List.”

A member of the Nazi party, Schindler used his contacts to save some 1,200 Jews forced to work in his factories. He harbored them there and prevented their deportations.

The people on Schindler’s life-saving list were initially interned in Plaszow, which was built in 1942. But in 1943, Schindler managed to move them to a nearby compound, the Brünnlitz labor camp.

The Red Army would not arrive for another year when the move happened, but with it, “I was liberated,” Victor Lewis, an electrician who survived the Holocaust thanks to Schindler, said in a testimony for the USC Shoah Foundation. He “did no work until the end of the war,” he added.

In Plaszow, Lewis saw Göth shoot dead random prisoners from the balcony of the camp commander’s quarters, a sight that was corroborated by multiple witnesses and which Spielberg depicted in his epic. Göth also executed his Jewish dog handler because the dogs preferred the handler’s company’s over Göth, according to some accounts.

Even Nazi SS soldiers were executed in Plaszow for dereliction of duty, according to witnesses. Eventually, even the SS was no longer willing to tolerate Göth’s excesses. He was removed from his position in 1944 on corruption charges. A Polish tribunal sentenced him to death in 1946 for murdering about 10,000 people. The remains of many of them are in Plaszow. Göth was hanged at a prison near Plaszow.

“We absolutely support the idea of commemoration, including building a museum,” Fijak, the activist fighting the city’s plan, said. “But this plan was pushed through without consulting residents and many agree that the museum will be in fact too small to meaningfully commemorate this place.”

Neither the municipality nor the Jewish Community of Krakow have replied to JTA’s requests for comment on the opponents’ arguments.

Some local Jews are also critical of the plan. FestivALT, a Krakow-based Jewish arts organization, has called on the city to halt any action for 90 days pending further consultations.

FestivALT has been organizing tours around the Plaszow compound focused on medicinal plants growing there. Magda Rubenfeld Koralewska, a co-founder of FestivalALT, told JTA that the municipality has not been transparent enough on plans for the area and that FestivALT was seeking “more inclusive and collaborative processes.”

FestivALT is “deeply concerned that a series of decisions made in this process are polarizing local residents, destroying the fragile ecosystem of the site, and sacrificing a real opportunity for a more meaningful project of commemoration,” the group wrote in a statement.

Rubenfeld Koralewska said that she believes the city is rushing its plans ahead of the 30th anniversary of “Schindler’s List.”

The municipality, she said, is “trying to end decades of neglect by pushing forward despite these concerns. But in Poland in particular, and in a place as significant as this, decisions need to come from consensus to ensure the future success of the commemoration.”