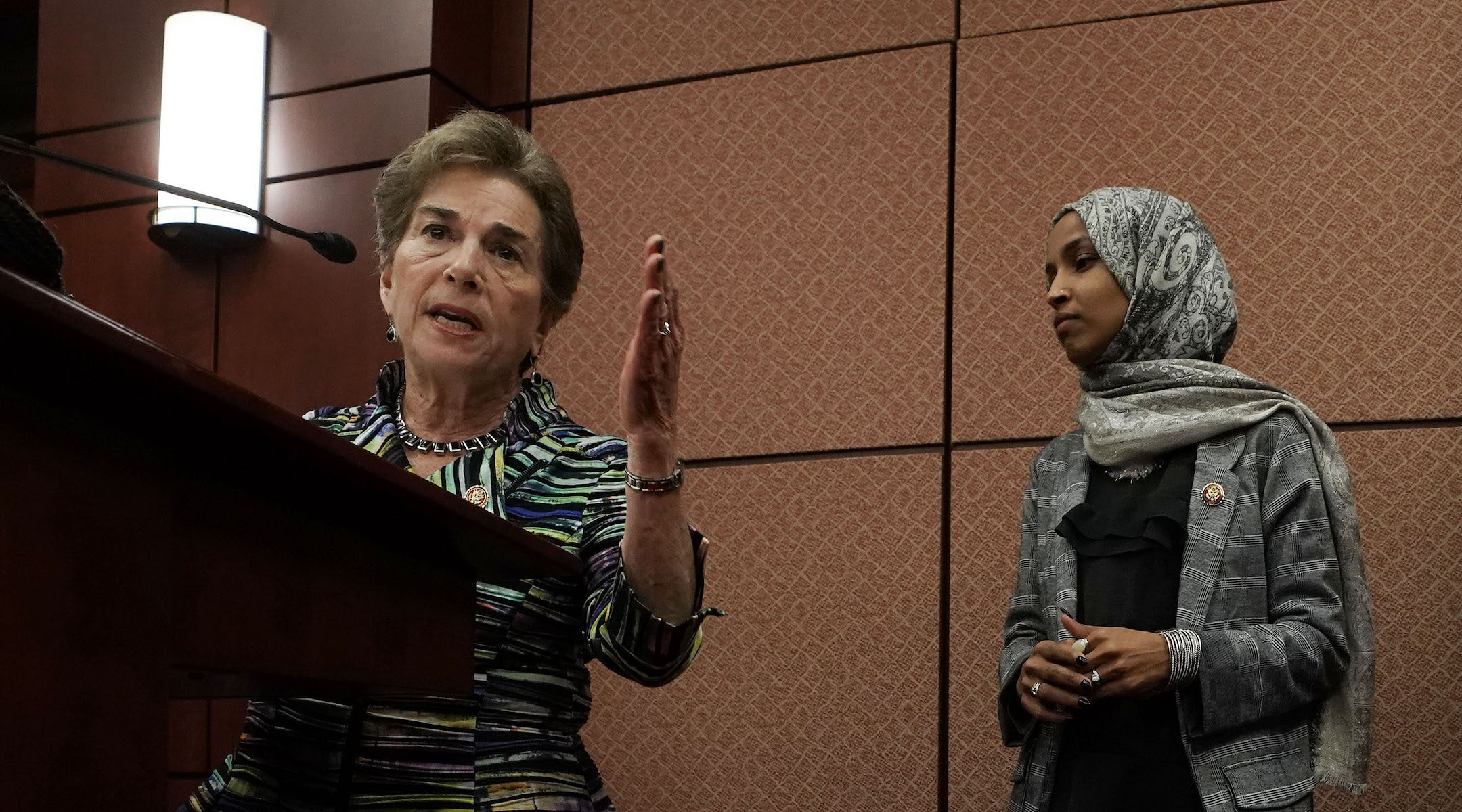 WASHINGTON (JTA) — A bill that would create an Islamophobia monitor in much the same cast as the State Department’s antisemitism monitor cleared its first hurdle on Friday, after a House committee debate about antisemitism.

The bill, whose lead sponsors were Rep. Ilhan Omar, D-Minn., one of three Muslims in Congress, and Rep. Jan Schakowsky, who is Jewish, was approved Friday by the U.S. House of Representatives Foreign Affairs Committee along party lines, with the majority of Democrats voting for it. It now goes to the House floor.

During an extended committee debate on Thursday, Republicans argued that there was no need to track Islamophobia, and that the monitor position would be used as an instrument to oppress conservatives. They also said that it would undercut the fight against antisemitism — and even encourage antisemites.

Democrats pushed back, saying that the U.S. government was capable of simultaneously tracking and exposing both bigotries. Notably, Jewish Democrats on the committee were among the first to speak in the bill’s defense, a showing that underscored their argument that an Islamophobia monitor would complement and not undercut the antisemitism monitor.

Rep. David Cicilline, D-R.I., who is Jewish, noted the pivotal role a letter from George Washington to a community of Jews in Rhode Island played in making the United States a safe haven for Jews.

“And so, religious freedom was born in my home state in Touro Synagogue in those words from the first president of the United States,” Cicilline said. “And so we should be very proud of that tradition, and making sure that no one suffers discrimination, because of their religious tradition, is central to that. This is not about ‘pick one,’ we should of course condemn and have condemned and will continue to condemn antisemitism and the rise of it.”

The bill’s defenders cited ongoing persecution of Muslims in China, Myanmar, India and elsewhere as an impetus. The monitor position, like the one that tracks antisemitism worldwide, would have no enforcement mechanism. It would be designated only to monitor bigotry overseas, not domestically.

“Whether it is the atrocities being committed against the Uyghurs in China and the Rohingya in Burma, the crackdowns on Muslim populations in India and Sri Lanka, the scapegoating of Muslim refugees and other Muslims in Hungary and Poland, the acts of white supremacist violence targeting Muslims in New Zealand and Canada, or the targeting of minority Muslim communities in Muslim-majority countries like Pakistan, Bahrain, and Iran — the problem of Islamophobia is global in scope,” Omar said Friday in praising the advance of the bill.

Other Jewish Democrats speaking in defense of the bill included Ted Deutch of Florida, Susan Wild of Pennsylvania, and Andy Levin of Michigan.

But Rep. Steve Chabot, R-Ohio, argued that a monitor for Islamophobia would undercut the work of the antisemitism monitor.

“To suggest that Islamophobia is on par with antisemitism is to dramatically understate and even trivialize the historic and pervasive nature that makes antisemitism such a difficult problem to overcome,” said Chabot. “We should avoid such a dangerous false equivalency at all cost as it could be used by some extremists to actually justify further antisemitic activity.”

Cicilline said “no one is suggesting equivalence.”

Rep. Lee Zeldin of New York, a Jewish Republican, focused less on the bill’s content and more on its author, Omar, who has faced criticism from fellow Democrats as well as Republicans for remarks seen as antisemitic.

“My colleague who introduces today’s resolution has made a number of statements deeply offensive, has taken a number of foreign policy positions that many on this committee and in Congress and in our country have issue with,” Zeldin said. “And when the statements were specifically targeting people who are Jewish, our nation’s great ally in Israel.”

Among other offenses, Zeldin named her backing of the boycott Israel movement, her critiques of United States policy in Venezuela, and two tweets for which Omar has apologized — one on how Israel “hypnotized” the world, and another critiquing the AIPAC pro-Israel lobby by writing “It’s all about the Benjamins baby.”

He also said the bill too broadly defined Islamophobia. The bill’s authors, Omar and Schakowsky, used the 2003 law that established an antisemitism monitor as a template.

Rep. Brian Mast, R-Florida, said he feared the Biden administration would use the bill to attack Americans.

“That’s the whole point of this,” Mast said. “Let’s create an office of attack for people speaking about their concerns.”