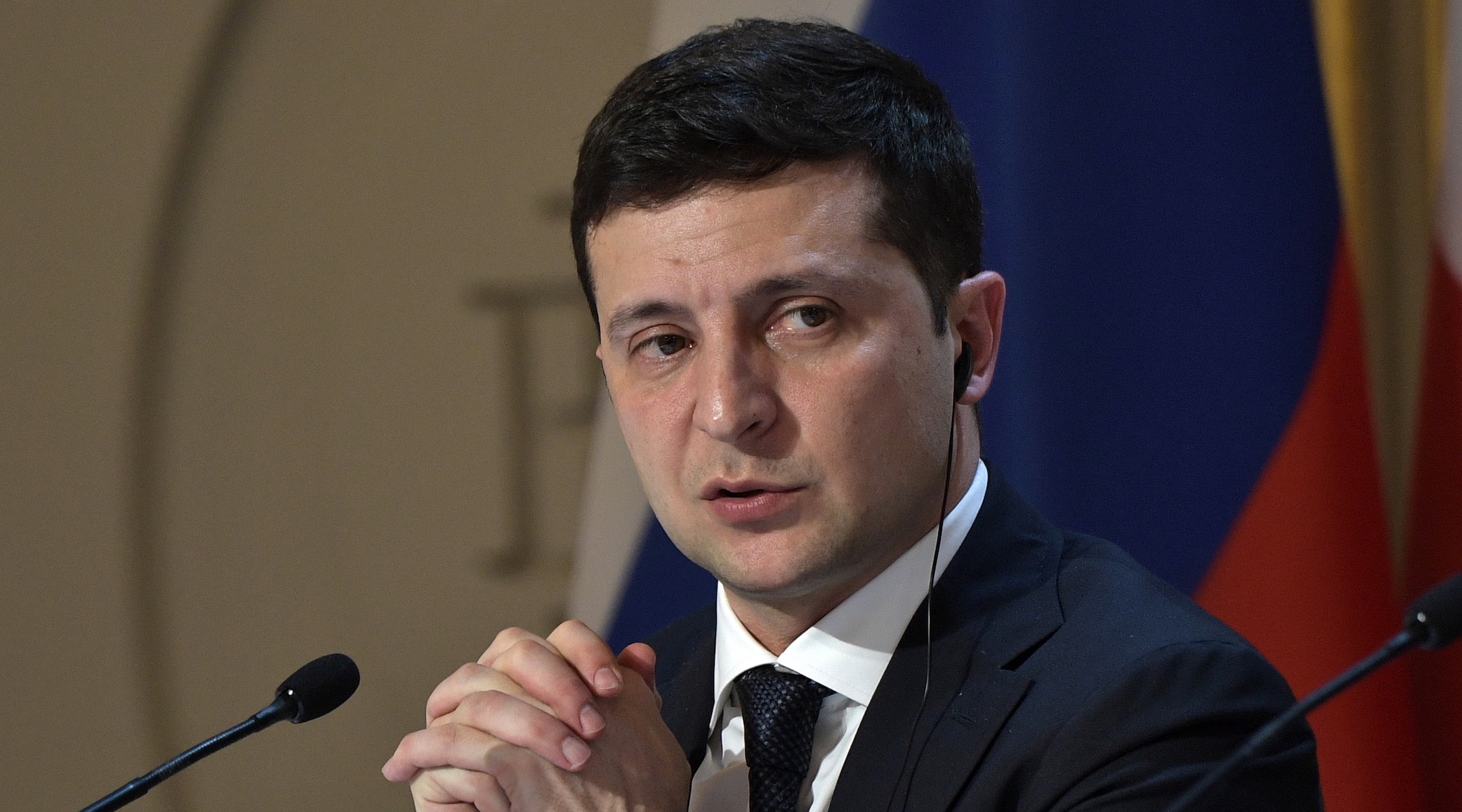 (JTA) — Amid renewed tensions between Russia and Ukraine, the leader of Ukraine drew parallels between his nation and the Jewish people at an event organized by Jews in Kyiv.

“We know what it’s like not to have an own state. We know what it means to defend one’s own state and land with weapons in hand, at the cost of our own lives,” President Volodymyr Zelensky, who is Jewish, said during a speech on Wednesday.

Zelensky, an actor and comedian who was elected president in 2019 thanks to many moderates who hoped he would deescalate the conflict with Russia, made the comments during the third annual Kyiv Jewish Forum, which is being organized by the Jewish Confederation of Ukraine, a communal body, with several partners.

“Both Ukrainians and Jews value freedom, and they work equally for the future of our states to become to our liking, and not the future which others want for us. Israel is often an example for Ukraine,” said Zelensky, who did not mention Russia explicitly in his speech at the event, which was held online due to the COVID-19 pandemic. The theme of this year’s conference was the 30th anniversary of the establishment of diplomatic relations between Ukraine and Israel.

In addition, Ukraine’s ambassador to Israel, Yevgen Korniychuk, told the Times of Israel that Ukraine may recognize Jerusalem as Israel’s capital — a goal Israel has been promoting intensively in recent years  — pending some security-related conditions. Korniychuk did not specify those conditions and has not replied to questions on the matter from the Jewish Telegraphic Agency.

Haaretz quoted the ambassador as saying, “No foreign minister or ambassador can call Jerusalem anything but the capital of Israel.” However, there is little clarity on whether Korniychuk’s announcement constitutes an official recognition by Ukraine of Jerusalem as Israel’s capital. Last year, Zelensky said that Ukraine is considering opening a trade office in Jerusalem, which has not yet been opened. He also said that moving the embassy to Jerusalem is “currently not on the agenda.”

Security collaboration between Israel and Ukraine is a sensitive issue for the Jewish state because Israel has vested security interests in maintaining a constructive relationship with Russia, which is the most significant military power on the ground in Syria. Israel, which also has close ties with Ukraine, has attempted to remain neutral on the dispute in Eastern Europe.

Russia has amassed about 100,000 troops along its border with Ukraine, according to Western intelligence agencies, prompting concerns of renewed fighting there.

Ukraine and Russia have had a border dispute since 2014, when Russia annexed Crimea, an area internationally recognized as belonging to Ukraine. Russia is also facilitating the de-facto secession of two enclaves along the Russian-Ukrainian border, which are being held by pro-Russian rebels.

The conflict began with the overthrow of the government of former Ukrainian president Viktor Yanukovych, labeled by his critics as a corrupt Russian stooge. Russia reacted to the revolution, which intensified nationalist and anti-Russian sentiment in Ukraine, by invading Crimea and facilitating the secession of the two breakaway regions.

Russian President Vladimir Putin, who had justified the Russian invasion as an action meant to safeguard minorities, including Jews, from Ukrainian “fascists,” recently also referenced Israel in the context of his country’s conflict with Ukraine. Putin suggested during a televised interview earlier this year that Ukrainians and Russians are essentially the same people and should unite as Jews have in Israel.

“We can never become complacent when it comes to threats of violence or hateful assaults against our sisters and brothers or against any human being,” Herzog said. “We must also reiterate that this is not just a Jewish issue. If allowed to fester, antisemitism ultimately lurks into other forms of intolerance and hate. It poisons our society and damages us all.”

The resurgence of nationalist sentiment in Ukraine has strained Israel’s relations with that country, especially when it comes to the veneration by the Ukrainian state of people who fought alongside Nazi Germany in World War II. Widely seen as patriots fighting against Russian domination, individuals like Stepan Bandera and Roman Shukhevych are celebrated in Ukraine with statues and street names, with no mention of the complicity of their troops in the Holocaust and other atrocities.

The former Israeli ambassador to Ukraine, Joel Lion, leveled intense criticism at Ukrainian officials over this issue, saying repeatedly and publicly that their actions on Nazi collaborators were “shocking and immoral.” Last year, the Ukrainian foreign ministry responded when Gennady Nadolenko, head of Ukraine’s diplomatic mission in Tel Aviv, advised Jerusalem to stay out of “internal issues of Ukrainian politics,” labeling Israel’s protests about the issue “counterproductive.”