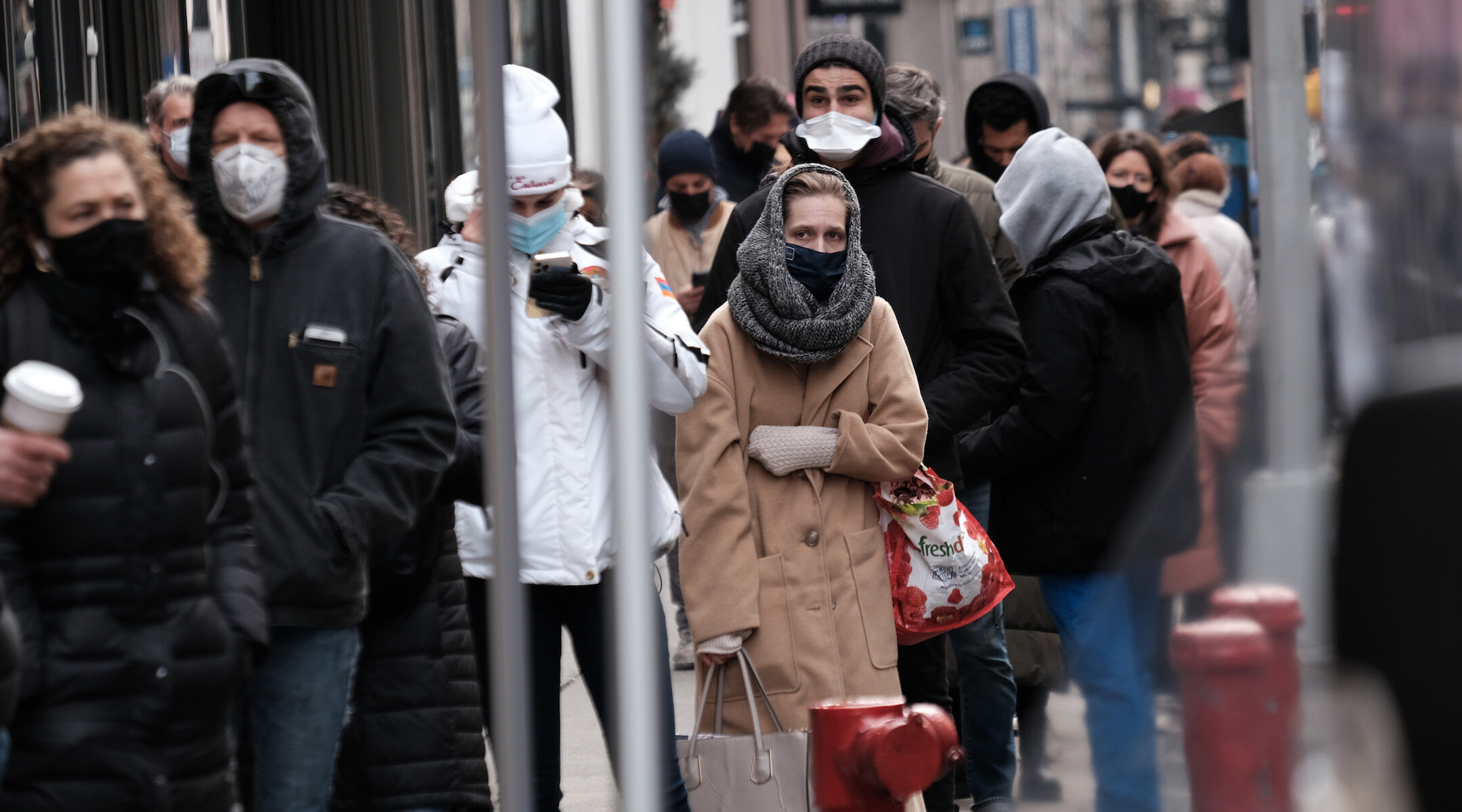 People wait in a long line in Manhattan to get tested for COVID-19, Dec. 22, 2021. City officials are passing out at-home tests at public hospital testing sites, but supply is still outstripping demand as the Omicron variant spreads and New Yorkers make holiday plans. (Photo by Spencer Platt/Getty Images)
Advertisement

Good morning, New York. Before heading into the long weekend, we want to wish you a good and healthy Shabbat. And remind you that you can catch up on the best of the week’s reporting with our printable, downloadable “Jewish Week/end” email, which will arrive every Friday. Sign up here.

We’re still a little verklempt after last night’s broadcast of the Kennedy Center Honors, which featured tributes to two iconic Jewish New Yorkers — Bette Midler and Lorne Michaels — and a performance by Paul Simon. It was a brief but happy respite from our Omicron anxiety.

JEW’S CLUES: Officials at City College were unable to identify the donor who sent them an anonymous gift of $180,000, but we’re going to go out on a limb and guess it was a grateful Jewish alum. Who else gives gifts in multiples of $18? (New York Jewish Week)

PARTY OF ONE: Danny Tenenbaum, an NYU School of Law grad, left the big city for Montana, where he is a rare breed in the state’s House of Representatives: a Jew and a Democratic Socialist. (JTA)

A Bay Area Muslim leader said “polite Zionist” groups can’t be trusted as allies on human and civil rights issues. Yehuda Kurtzer, president of the Manhattan-based Shalom Hartman Institute of North America, explains why such ideological litmus texts are toxic for interfaith relations, whether applied to Jews or Muslims. (JTA)

Why did God choose Moses? Because the adopted Egyptian prince was able to look past the surface of the natural world to see the miraculous possibilities beneath, writes Freema Gottlieb in a Jewish Week essay.

IT’S CHRISTMASTIME FOR THE JEWS*

Even with the spread of Omicron this year, there are plenty of things to do and see this weekend. The Jewish Week’s Julia Gergely pulled together a list of activities (call ahead in case of cancellations):

*We’re just quoting what is perhaps the best Christmas song ever.

Join Congregation B’nai Jeshurun via livestream for a concert with Jewish musician Joey Weisenberg and the Hadar Ensemble. The concert, originally in person but moved to streaming due to the COVID spike, can be watched on B’nai Jeshurun’s Facebook page or register for the Zoom here. 7:30 p.m.