‘What is rabbi?’: Angela Buchdahl becomes a ‘Jeopardy!’ clue 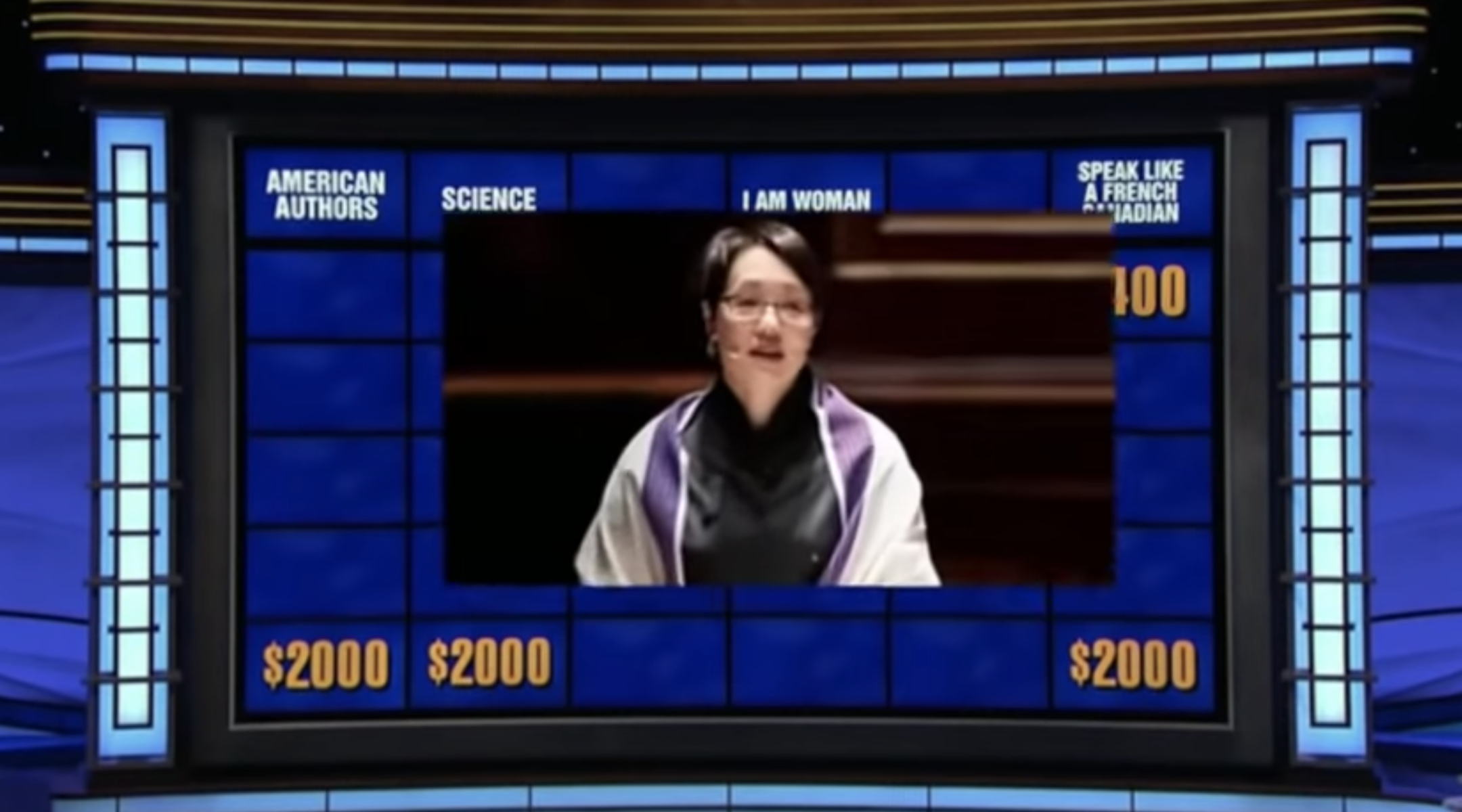 Rabbi Angela Buchdahl's face appeared on millions of TV screens when she was part of a "Jeopardy!" clue, Dec. 29, 2021. (Screenshot of show)
Advertisement

(JTA) — Few rabbis appear before more people than Angela Buchdahl, the senior rabbi of New York City’s 2,000-member Central Synagogue. But Buchdahl may have become one of the most recognizable rabbis ever after her name — and face — appeared as a clue on “Jeopardy!” Wednesday night.

The cameo came toward the end of the game show’s second round, in a category titled “I am Woman.” Reigning champion Amy Schneider, en route to her 21st straight win, selected the $800 clue, and a picture of Buchdahl wearing a tallit with purple stripes appeared.

Host Ken Jennings read the clue: “Korea-born Angela Buchdahl is the first Asian-American to be ordained a cantor, as well as this leader of a Jewish congregation.” Contestants didn’t have to know anything about Buchdahl to make out that the correct response was “What is ‘rabbi’?” and Ben Walthall, who ultimately came in third, got it right away.

Born in South Korea in 1972 to an American Jewish father and Korean Buddhist mother, Buchdahl grew up in Tacoma, Washington, and became a rabbi in 2001 when she graduated from Hebrew Union College, the Reform movement’s seminary. Since becoming senior rabbi at Central Synagogue in 2014 (she had been senior cantor there since 2006), Buchdahl has been a public ambassador for the idea that the Jewish people are more diverse than many might think, speaking on the topic in the media and in her sermons.

Rabbi Geoffrey Mitelman, a one-time “Jeopardy!” contestant who organized a memorial service for former host Alex Trebek after his death, congratulated Buchdahl on her appearance as a clue.

“Mazal tov to Rabbi Angela Buchdahl for being more than a contestant on Jeopardy! but as a CLUE!” he said in a tweet.

Incidentally, none of the contestants correctly identified New York Gov. Kathy Hochul in the same category.

Buchdahl’s appearance comes amid a string of notable Jewish clues on “Jeopardy!” in recent months. Earlier this month, the show devoted an entire category to Yiddish theater, and cholent, the slow-cooked Shabbat stew, was featured in a clue near the beginning of the season. Mayim Bialik, the Jewish actor who is sharing hosting duties with Jennings while the show seeks a permanent replacement for longtime host Alex Trebek, explained the traditional Jewish food to the stumped contestants.