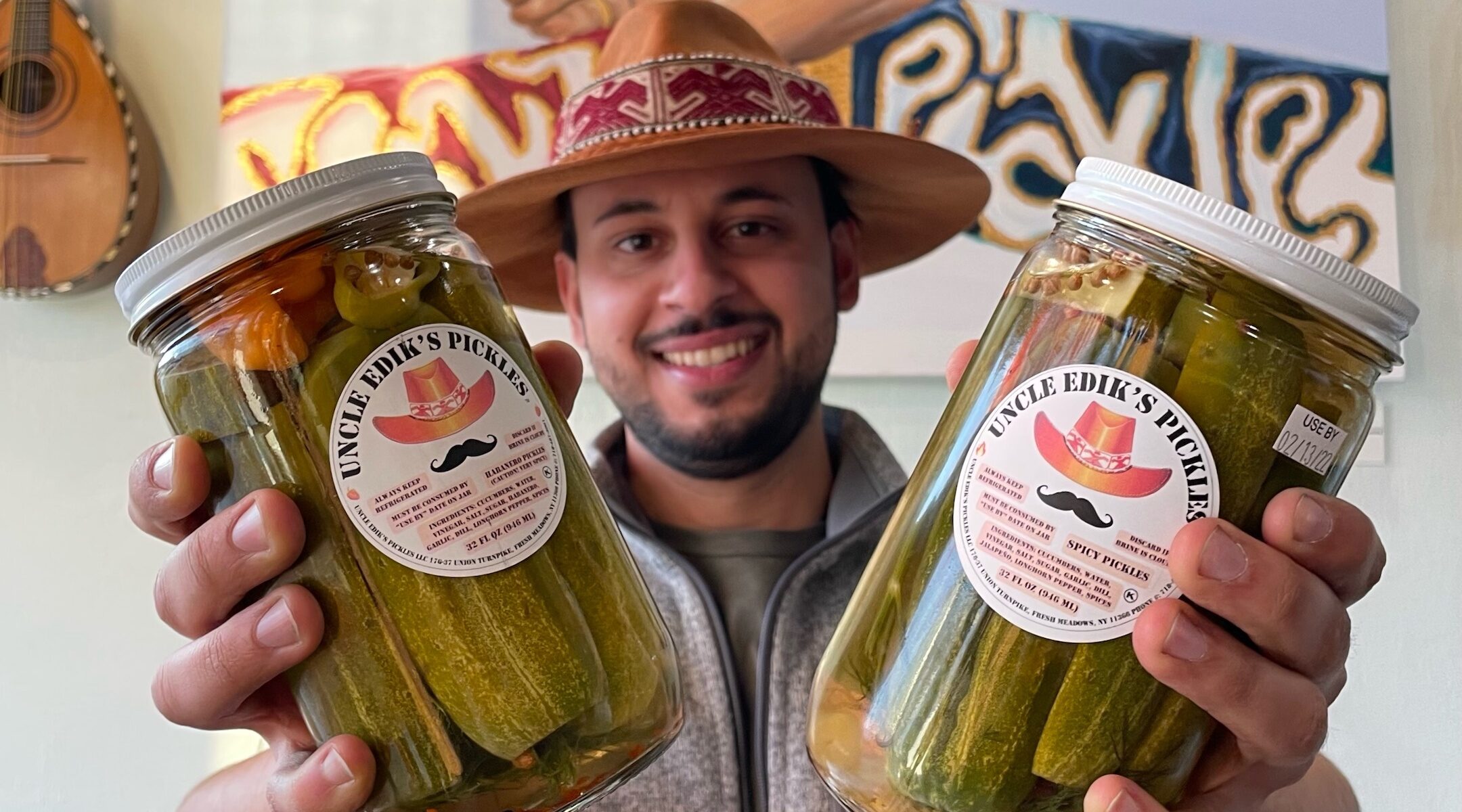 (New York Jewish Week via JTA) — The first person in his family born in America, Edward Ilyasov spent his childhood in Hillcrest, Queens, watching cooking shows and dreaming of traveling the world.

Even as a young boy, Ilyasov, 29, felt he was destined to do something outside of the life path set for him by his parents and his community. He knew he didn’t want to grow up and become a pharmacist, dentist, barber or jeweler — popular professions among the members of Queens’ Bukharian Jewish community, a tight-knit enclave of some 70,000 Russian-speaking Jews who originally hail from Central Asia.

Still, as a child of divorced immigrants, Ilyasov’s primary career goal was to make money. So, after completing his undergraduate degree at Queen’s College and getting a master’s degree in financial engineering at Columbia University, Ilyasov headed to Wall Street to work as a financial analyst for Deutsche Bank and Santander Bank.

But after five years, despite the stable salary and parental approval, Ilyasov felt unfulfilled. So he decided to go from crunching numbers to crunching something a little more satisfying: pickles.

The idea first sparked three years ago, when Ilyasov’s aunt served him a crunchy homemade pickle with a surprising depth of flavor.  Ilyasov wanted the recipe, but his aunt was only able to provide vague instructions  — “a little bit of this, a little bit of that,” he recalled. “Really, no numbers.”

Ilyasov made it his mission to recreate the flavor. Within a week, he posted his version on Instagram, where it went viral in the Bukharian community. His friends who heard the crunch of the pickle in the video wanted to try it in person, he said. Ilyasov made small jars for them. As word spread, he began selling his jars for $5 — eventually amassing a 600-order waitlist.

And so, Uncle Edik’s Pickles was born. Though pickle-making began as a hobby — Ilyasov tinkered with the recipes outside of work hours, especially during the first months of remote work when the pandemic began — it became a career. Ilyasov quit his finance job and became a full-time “picklepreneuer” in November 2020, selling jars of pickles via Instagram and word of mouth.

Last October, Ilyasov moved into a storefront at 176-37 Union Turnpike in Fresh Meadows, just across the street from where he grew up. After a month spent catching up on the waitlist, Uncle Edik’s Pickles officially opened to walk-in customers in November. He now employs five people in the store, and hopes to expand even further once they reach a level of production that doesn’t sell out every week.

“It’s not a typical pickle — people are used to sour pickles or half-sour pickles,” Ilyasov told The New York Jewish Week. “These pickles are vinegar-based. They’re aged for about a week in a cold aging process.”

Ilyasov’s pickles vary from traditional Ashkenazi pickles one might still find on the Lower East Side, which are brined in a saltwater solution for one to two months.

“The pickles remain really crunchy,” Ilyasov said of his Bukharian method. “And, at the same time, they’re still packed with flavor because of the delicate blend of spices.” 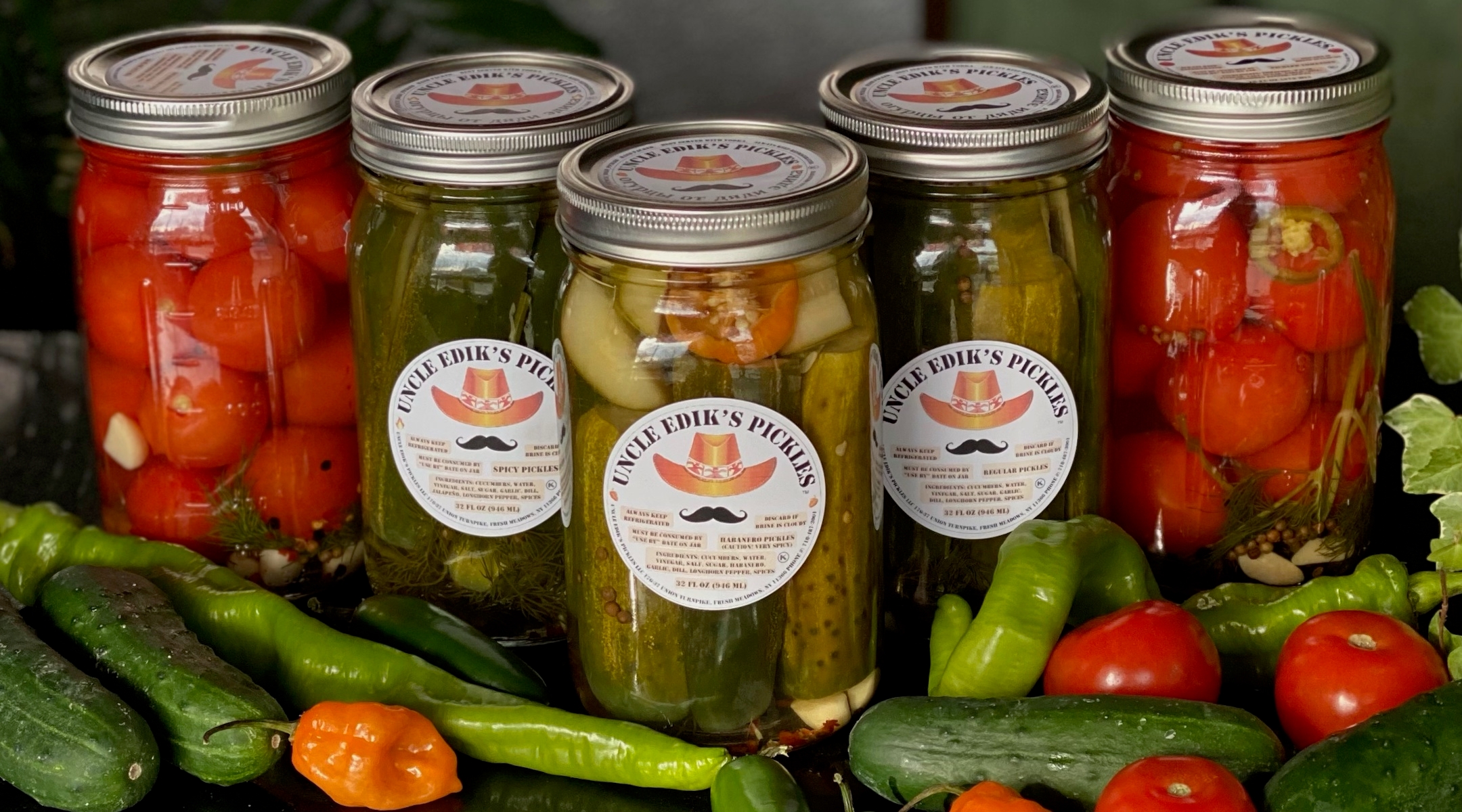 Ranging from $8 to $10 a jar, Uncle Edik’s offers regular, habanero and spicy pickles, along with pickled tomatoes. So far, Edik’s has sold out its stock every week since opening. (Courtesy)

Why pickles? As Ilyasov explained, they are a traditional accompaniment of many Bukharian dishes, such as plov — a one-pot meat and rice dish — or shish kebab. They’re also a main component of zakuska, which are pickled hors d’oeuvres served with vodka, a traditional celebratory course.

“It presents itself as an extremely high-end pickle,” Ilyasov said of his creations, which include regular, spicy and habanero flavors. Retailing at $8 or $10, depending on flavor, a jar of Uncle Edik’s Pickles is meant to be more than a mindless add-on to a sandwich. Rather, these are intended to be delicacies for special meals and Shabbat tables, or as gifts to be given with a bottle of vodka.

As for the name, Ilyasov explained that Edik is a diminutive of Edward, and “uncle” in Russian is an honorific similar to “mister,” and is usually reserved for older, respected members of the community. “When people say the name in Russian, there is a subconscious respect associated with it,” he said. “It makes the business perceived as something prestigious and respectable.” (Plus, Ilyasov added: his nephew was born right around the time he finalized his recipes.)

Though Ilyasov considers Uncle Edik’s Pickles the fruition of a lifelong dream, he said he is most proud that he has proved to himself that someone from the Bukharian community and a first-generation American can find a career that is both fulfilling and successful.

Ilyasov considers himself a minor celebrity in the Bukharian community. “I’m probably in the top two or three most well-known Bukharians of my generation,” he said.

Harnessing his influence, Ilyasov is passionate about giving younger members of his community career advice. While he worked in finance, he hosted a panel called “Unconventional Bukharian Careers,” where Khaimov and other members of the community counseled high school and college students.

“They really don’t know what’s out there,” Ilyasov said of the teens in his community. “They could go into media, social sciences, graphic design, law. Even medical doctors are very rare. People are so focused on starting a family in our community that they don’t really strive for risky careers that they might not be able to get into.”

“So for me, being able to show that it’s possible to make a living — a good one and a fun one — out of making something I’m passionate about, like pickles, means everything,” he added.

“I’m obviously not earning as much as I used to. Everything I invested was my own savings,” he said. “So it’s gonna take a while for me to catch up to that. But fulfilling? Yes. It’s been a blessing.”

Ilyasov — whose pickles are certified kosher by OK — is very aware that he is honoring a Jewish tradition by opening a pickle business in the city. Some of his favorite interactions, he said, have been with older customers who have come in to reminisce about the hundred different types of pickles you could find on the Lower East Side.

“To have a place in Queens right in the heart of a very Jewish neighborhood, to bring back the ability to pick up a jar before Shabbat, is so important,” he said.

As for what he’ll do next, once he’s reached his pickle potential? “I don’t know,” said Ilyasov. “Maybe politics next.”