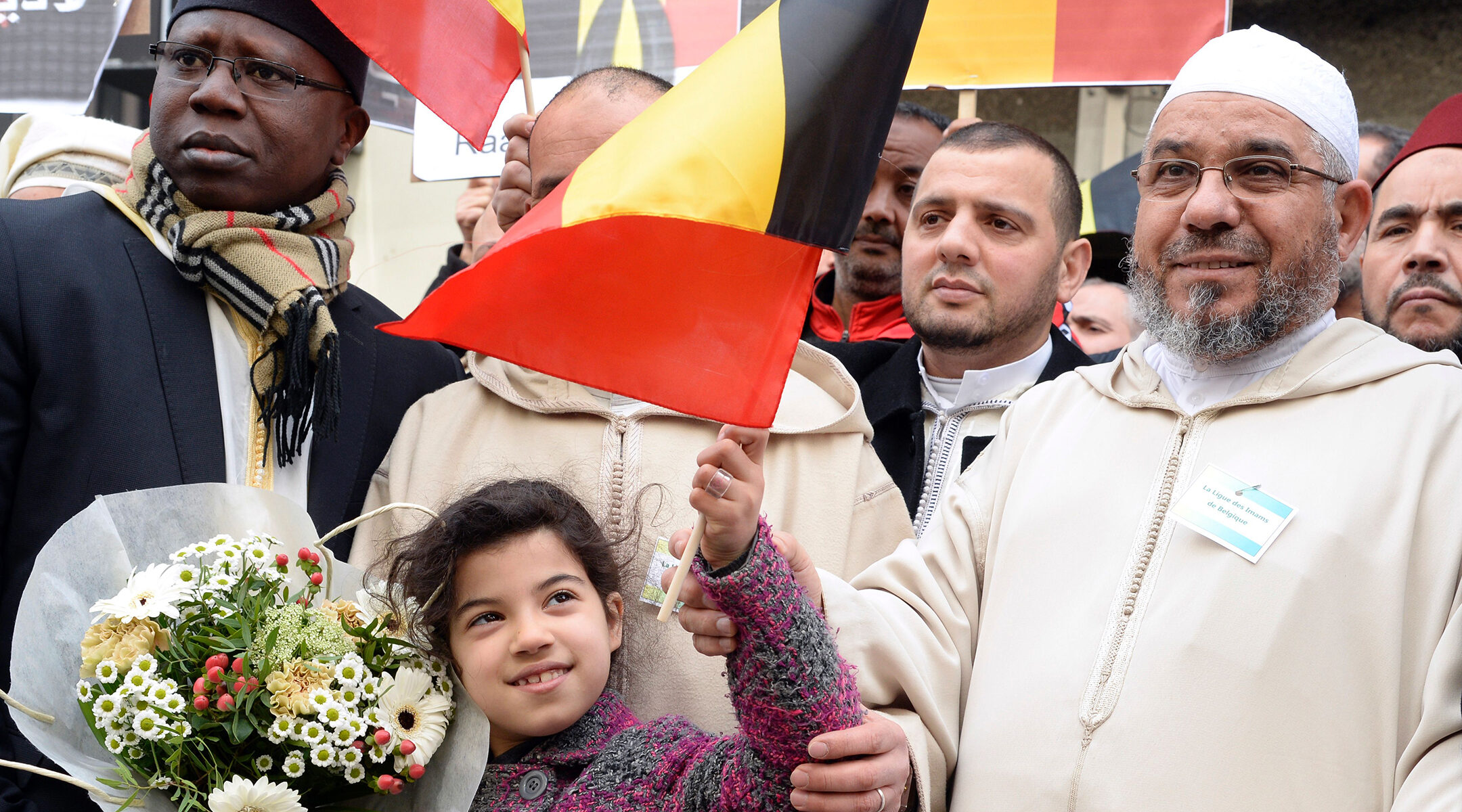 Members of the Muslim Community of Belgium, including Molenbeek Imam, Cheik Mohamed Toujgani (R), take part in a tribute, called by Muslim organizations, to the victims of the March 22 Brussels terror attacks on April 9, 2016, outside of Maelbeek / Maalbeek metro station, Brussels. On March 22, two bombs exploded, one in the departure hall of Brussels Airport and another in the Maelbeek - Maalbeek metro station, leaving 31 people dead and 250 injured. / AFP / THIERRY CHARLIER (Photo credit should read THIERRY CHARLIER/AFP via Getty Images)
Advertisement

(JTA) — A Brussels-based imam who in 2009 prayed to Allah to burn Zionists has left Belgium on the order of authorities who flagged him as a security threat.

Imam Mohamed Toujgani, who was born in Morocco and had lived for decades in Brussels, was expelled in October, the VRT broadcaster reported Thursday, according to The Times of Israel.

It was not immediately clear whether the expulsion was directly over his remarks about Zionists, which happened in 2009 and surfaced in 2019.

Belgium’s Secretary of State, Sammy Mahdi, said during a parliament session this week that Toujgani had called to “burn Jews.” Georges-Henri Beauthier, a lawyer representing Toujgani, called that statement “a falsehood that incites hatred,” the RTBF broadcaster reported.

In a YouTube video that the Belgian League Against Anti-Semitism, or LBCA, flagged in 2019, Toujgani is seen saying the following during a sermon at his mosque in Brussels: “Lord, master of worlds, fill with fear the hearts of the Zionist oppressors. Lord, fill their hearts with fear. Lord, make the earth tremble beneath their feet. Lord, make the blood of the martyrs a weapon under the feet of the Zionists oppressors, and may this blood ignite a fire that burns them and start a wind that eviscerates them. […] O Lord, tear them down.”

Toujgani was nominated to become president of the conference of Belgian imams in 2019. He has spoken in favor of tolerance and against jihadism in recent years.

He has apologized for the Zionists comments following the resurfacing of the video, saying he was infuriated by Israeli strikes against Hamas in Gaza, which Israel had carried out in retaliation for Hamas’ firing of rockets on civilians and digging of tunnels designed to launch strikes inside Israel.

He said that was the “geopolitical context for comments that I regret making.”

Toujgani’s lawyer said he will appeal the expulsion.