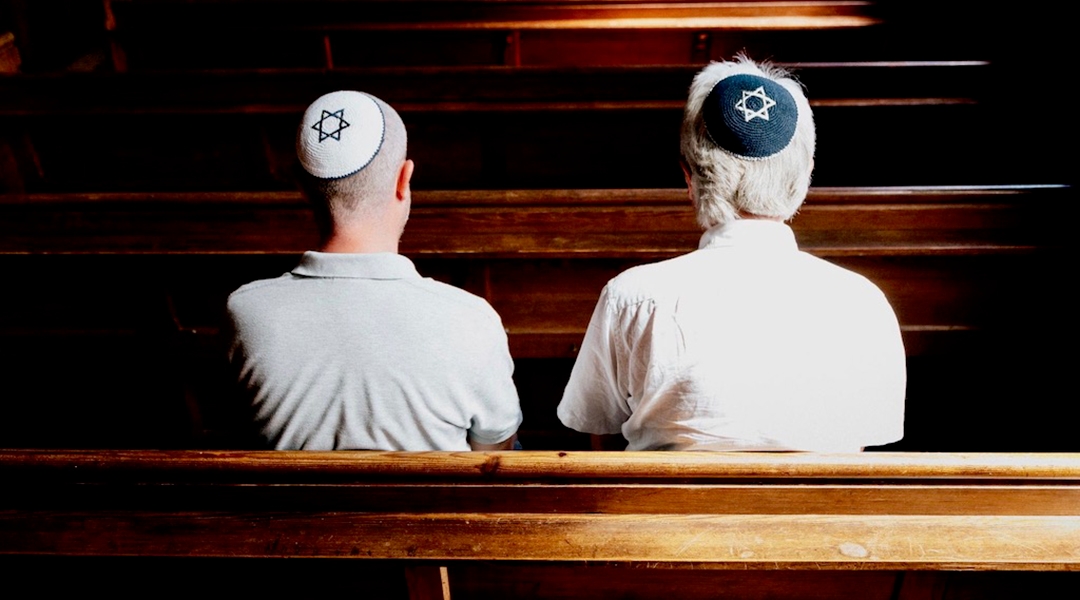 "Some people come to synagogue to talk to God. I come to talk to Ginsberg." (Getty Images/coldsnowstorm)
Advertisement

(JTA) — 70 Faces Media, the parent company of the New York Jewish Week, lost a colleague last week: Nate Geller, a director on our fundraising team, died after a struggle with leukemia. Nate took genuine pride in everything 70 Faces does, and his colleagues loved him for his interest, for his insights and his menschlichkeit.

Nate and I weren’t close friends, but our families belong to the same synagogue. His death got me thinking about that unique extended family that forms among synagogue regulars. Before COVID we could count on seeing each other every Shabbat and catching up at kiddush. Sometimes our conversation consisted only of a quick exchange of “Shabbat Shalom.”

But if you spend enough time in synagogue, you know these casual — even hurried — exchanges forge tighter bonds than others might expect. I’ve heard a community defined as a place where you can depend on accidentally bumping into someone you know. Synagogue is a little more intentional than that, but it still fosters that sort of unplanned intimacy. We know each other’s business: how the kids are doing, who’s ill, who’s mourning. Stick with a community long enough and you see families expand and contract. (I joke that every new wave of babies is just pushing me that much closer to the retirement home.)

You may not be invited to the wedding of a synagogue-mate’s son, but you are in the pews for the aufruf and, peh peh peh, the baby naming.

This version of synagogue is an example of what the sociologist Ray Oldenburg called “third places” — the cafés, bars, Main Streets or town squares that serve as “institutions of mediation between the individual and larger society.” In his 1989 book on the subject, “The Great Good Place,” Oldenburg defines third places as “public places that host the regular, voluntary, informal and happily anticipated gatherings of individuals beyond the realms of home and work.”

In short, they are places where everybody knows your name.

Third places create the habit of association, drawing people out of their suburban anonymity and weaving them into the broader fabric of community life.

Third places also serve as havens between family and workplace, where you can enter into a web of casual friendships that do not come burdened with the emotional demands of lifelong friendships, family ties or professional relationships.

Synagogues aren’t perfect as third places — for example, there are very few synagogues that offer opportunities to meet across socio-economic class. Racially they tend to be homogenous. And even the most liberal synagogue stands for a set of beliefs that is bound to alienate someone.

And I understand that my take on synagogue-going is idealistic and maybe a touch profane. There are as many reasons for going to synagogue as there are Jews: tradition, obligation, guilt, commandment, spiritual attachment, professional advancement, study, mourning, celebrating, social climbing, a deep connection to God.

I happen to be like the guy in the old joke, who gets shushed for talking in the back row of shul. “Listen,” he replies. “Some people come to synagogue to talk to God. I come to talk to Ginsberg.”

The pandemic has put a crimp in my synagogue-going — more than a crimp, as Omicron and winter have reduced our minyans to a small and hardy crew of stalwarts. I admit to hunkering down at home, even though I am vaxed and boosted.

Once confident that synagogue life would rebound after the pandemic, now I am not so sure.

That would be tragic. More than anything, what I need right now is what Johann Huizinga, the great theorist of human play, called “the feeling of being ‘apart together’ in an exceptional situation, of sharing something important, or mutually withdrawing from the rest of the world and rejecting the usual norms.”

Nate understood that feeling: At his funeral, the rabbi and Nate’s family spoke about how he was often among the last people to leave kiddush on Saturday afternoons — and would keep the conversation going on the walk home. Our third place won’t be the same without him.