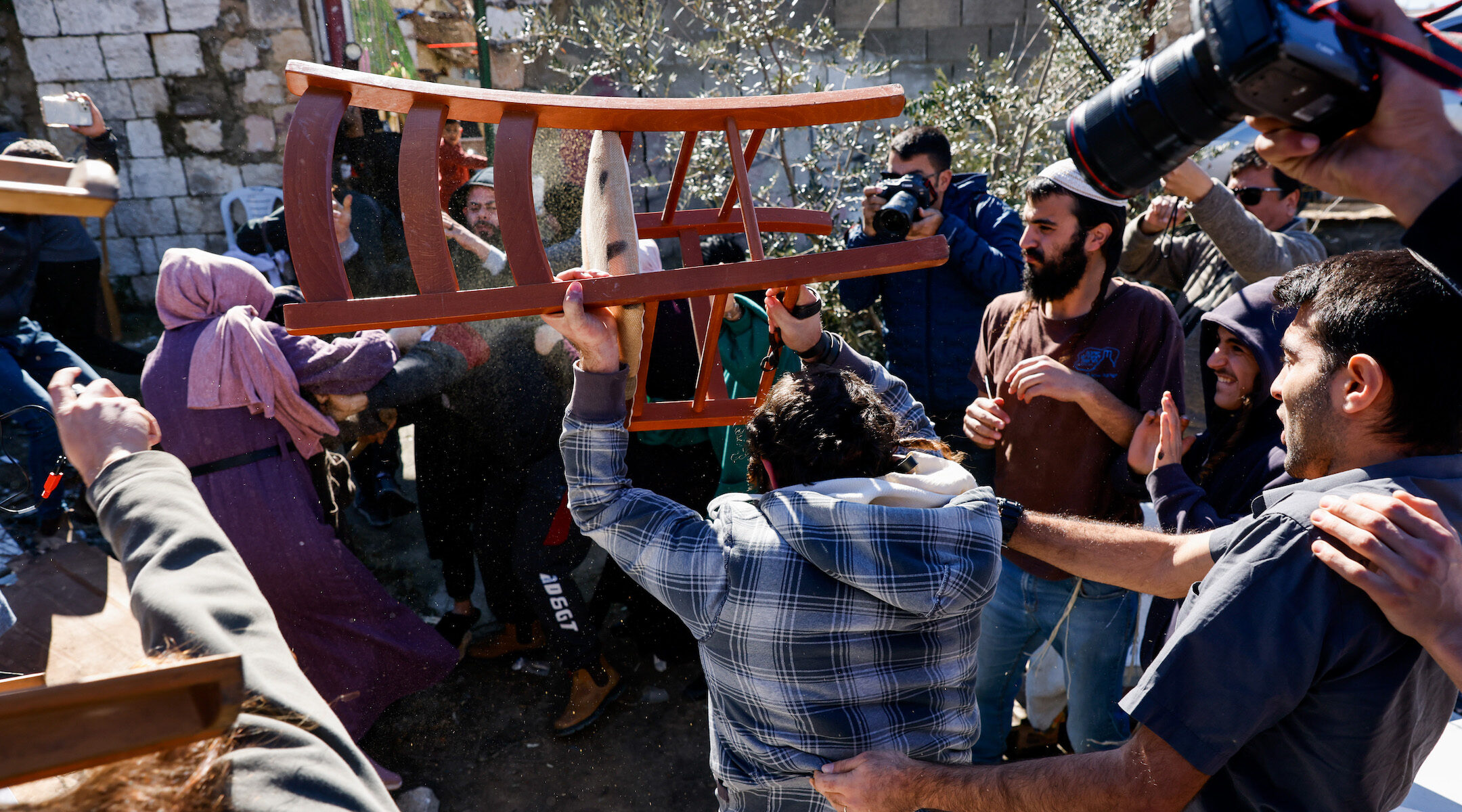 Jewish men clash with Palestinians in Sheikh Jarrah as Itamar Ben-Gvir arrives to open his office in the neighborhood, Feb. 13, 2022. (Olivier Fitoussi/Flash90)
Advertisement

(JTA) — Violent clashes broke out over the weekend in Sheikh Jarrah, the eastern Jerusalem neighborhood where violent protests over property ownership helped set off the May 2021 war between Israel and Hamas in Gaza.

The mostly Palestinian area has become a focus in recent years of Israeli settler groups, who are trying to have Palestinian residents evicted. The ensuing legal battle has turned the neighborhood into a tinderbox.

The latest violence began with an alleged firebombing attack on the home of a Jewish family in the area Friday. The family was not at home, and no one was injured.

After the alleged firebomb incident, Itamar Ben-Gvir, a far right-wing member of the Israeli Knesset, vowed Saturday to reopen an office in the neighborhood, a step he had taken in May 2021 to support the settlers. At the time, then-Prime Minister Benjamin Netanyahu asked Ben-Gvir to close the makeshift office to reduce tensions in the area.

Ben-Gvir is the head of the Otzmah Yehudit party, the far-right party that is the descendent of Kach, the party formed by the Jewish terrorist Meir Kahane. In a statement Sunday, Ben-Gvir said Jewish Israelis are “the landlords” and claimed the appropriate response to terror was more terror.

“A murderous terror organization cannot operate in Jerusalem. Vehicles are set ablaze, children are getting hurt. They threaten us and the State of Israel,” he said, according to Haaretz.

In a tweet, Ben-Gvir called on Israeli citizens to gather in the area Sunday afternoon to “strengthen the Jewish residents. We are not afraid of Hamas threats!”

More violence followed Ben-Gvir’s announcement Saturday. In the late hours on Saturday or early hours of Sunday morning, at least two people were wounded and six people arrested. At least one Jewish man was injured and one Arab driver arrested, according to the Times of Israel. Video from the area showed fighting between Jews and Palestinians on the streets.

Also known in Hebrew as Shimon HaTzaddik, the Sheikh Jarrah neighborhood was home to Jewish families before Jordan captured it in the 1948 war that resulted in Israel’s independence. Jordan gave the Jewish families’ homes to Palestinians who were displaced from Israel and prohibited from returning. In recent years, an Israeli group that obtained the original Jewish families’ ownership rights has been trying to evict the Palestinian families from the homes.

Protests over the pending evictions helped spark the conflict in May 2021 between Israel and Hamas in Gaza and just last month, Israeli police evicted a Palestinian family in the neighborhood and knocked down their home to make way for a school in the first eviction in the neighborhood in several years.