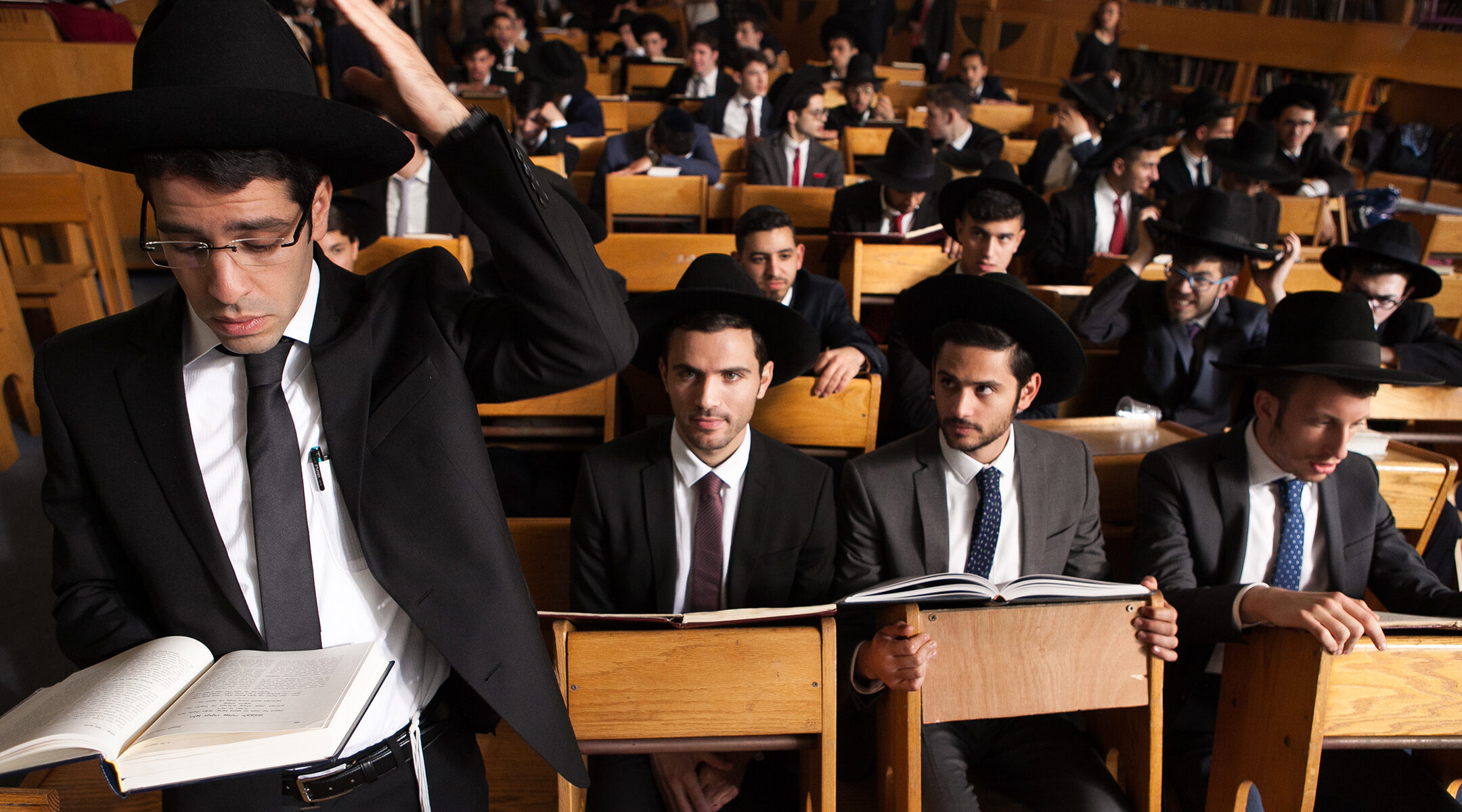 (JTA) — Having obsessively watched every episode of “Srugim,” a “Friends”-like series about Modern Orthodox singles in Jerusalem; “Shtisel,” about a perpetually lovelorn haredi man and his family; and “Mekimi,” which focuses on a secular woman who becomes haredi after her boyfriend does, I was primed to watch the latest Israeli series about religious life.

But it turns out that all the dramatic predecessors I watched left me completely unprepared for “Shababnikim” — a wacky, stylized comedy with an excellent soundtrack and a whole new way of depicting the world of the yeshiva.

In some ways, the show is a spin on a familiar conceit: Three cool guys — the wealthy future heir; the slick-talking politician’s son; and a sweet but not-too-bright jock — are dismayed when a nerd knocks on their dorm room door and says he’s been told to move in with them.

The cool guys want to sleep in, lift weights, play on their iPhones and laptops, smoke, fight over borrowed clothes, and talk about girls. They’ve also already got their room just the way they like it: a Nespresso machine, a fridge full of mom’s food, pop art on the walls and a Roomba to clean up.

The nerd, of course, wants to crack open his books and study. He can’t comprehend his new roommates’ attitudes and hates the distractions they provide. Hijinks ensue, but soon we see a friendship form — one in which the nerd learns from the cool guys how to loosen up and impress girls, and the cool guys from the nerd, realizing that, hey, maybe there’s something worth paying attention to in those books, anyway.

But there’s a twist: Instead of donning baseball caps when they go out on the town, the guys in “Shababnikim” put on Borsalinos, the Italian felt hat that is widely worn in Orthodox communities. They’re not college students but yeshiva bochurs, and they have no biology textbooks or novels, both of which would likely be banned or censored at their school. Their iPhones and laptops are forbidden, as is the internet (a signal scrambler is installed on the building wall to prevent them from using it). Their dates are arranged by a third party as a direct route to marriage, not a chance to play the field.

The show has been made available this week with English subtitles, via ChaiFlicks, a platform that makes Israeli TV shows available to English-speaking audiences. There, the show is called “The New Black,” a reference to the black hats worn by haredi men. The Israeli version’s name, “Shababnikim,” is translated in the first episode as “the rebels,” but this generic English word doesn’t capture the meaning of the derogatory Hebrew term, which refers to young haredi Jews who are not serious about their studies, not willing to put in the predawn-through-late-night hours with the Talmud to make them look like the thin, pale, hunched-over bochurs of every fictional yeshiva setting you’ve ever encountered (see “Yentl”).

The nuance of this word is a tipoff that the show, created by Eliran Malka, is offering an unusual window into Israeli haredi Orthodox culture.

Given the surprising popularity of shows depicting haredi and Orthodox life in recent years — I was so fascinated by them that I wrote a whole book about cultural depictions of Orthodox women, but apparently I’m not the only one with an interest — I think American audiences will adore “Shababnikim.” It’s the perfect addition, neither about complete devotion to religious life, nor, like “Unorthodox” and “My Unorthodox Life,” about renouncing every aspect of it. Rather than suggest that haredi communities are all or nothing, the yeshiva students on “Shababnikim” are not trying to overturn or leave the faith. They just want to hang out on the borders of it, where life is more fun.

And funny — darkly so. Tiny spoiler: in the first scene of the series, one of the main characters is thanked by the head of the yeshiva for his family’s donation of a beautiful chandelier. A minute later, just as this rosh yeshiva is about to make a grand pronouncement, said chandelier crashes down and kills him. Oops!

But if fast-paced, laugh-out-loud “Shababnikim” distinguishes itself from the likes of “Shtisel,” full of melancholic plotlines and dreary music, it also stands apart because of the in-depth way it explores fault lines of race within haredi communities.

In many ways, two of the main characters, Avinoam and Meir, offer two distinct pictures of Sephardic/Mizrahi life in Israel. Historically, the terms refer to patterns of migration: Sephardic Jews are the descendants of the Jews exiled during the Spanish Inquisition, while Mizrahi Jews came from the Middle East and North Africa. As the exiled Spanish and Portuguese Jews often settled in and mingled with Mizrahi communities, the distinction between “Sephardic” and “Mizrahi” has softened, and many Jews identify as both.

But as the show depicts, the identities carry different connotations in Israeli haredi societies.

Avinoam comes from a well-connected family and is referred to as Sephardic. “Sephardic is high-class. Sephardic is Rabbi Ovadia’s grandson. Or Ibn Gabirol’s great-grandson,” explains the matchmaker, referring first to the former chief Sephardic rabbi of Israel and then to an 11th-century Andalusian poet. The matchmaker goes on to give other examples of who counts as Sephardic — someone who comes from a family of rabbis in Aleppo or who owns property in an upscale neighborhood of Jerusalem.

Unlike this picture of wealth, influence, and lineage, the matchmaker tells Meir, who hails from a working-class neighborhood, “You’re a Frank” — a rude way of saying Mizrahi. “What do you think a Jewish mother would say if she saw you in her house?” he asks.

Meir’s bright green eyes sparkle as he ventures, “What an awesome guy?”

The matchmaker corrects him: “Who called the electrician?”

Despite the vast distinction suggested between Avinoam and Meir, we learn that ultimately both are treated as inferior to Ashkenazi Jews. “Where is your father from?” Avinoam recalls being asked when he applied to a previous yeshiva. When he gives the answer — Tunisia — the rabbi in charge offered one response: “So was Arafat.” Yasser Arafat, the former chair of the Palestinian Liberation Organization was actually from Egypt. But the implication is clear: For many Ashkenazi haredi Jews, Mizrahi Jews, even well-heeled ones, are barely distinguishable from Arabs — for them, the lowest of the low.

For all of its strengths, the show is not entirely sensitive to all forms of difference, and the uneven English subtitles provided by producer Dori Media can exacerbate the show’s sometimes-offensive humor. An already ableist scene in which Meir is horrified to be set up with a woman in a wheelchair, for instance, is made worse by the translation, “And [the matchmaker] didn’t tell you she was a handicap?”

Nominated for eight Israeli TV Academy Awards, the show has certainly impressed Israelis. It’ll be exciting to see how well it fares in the Diaspora: Are we ready to laugh with haredi Jews as well as cry with them?

Karen E. H. Skinazi
, PhD, is a senior lecturer and Director of Liberal Arts at the University of Bristol in the UK. She is author of Women of Valor: Orthodox Jewish Troll Fighters, Crime Writers, and Rock Stars in Contemporary Literature and Culture (Rutgers University Press, 2018).
The views and opinions expressed in this article are those of the author and do not necessarily reflect the views of JTA or its parent company, 70 Faces Media.