British Jews love soccer. So why are there no Jews in the Premier League? Jews in Britain are even more likely than non-Jews to be soccer fans, one study found. But barely any have played in the Premier League since its founding in 1992. (Getty Images/Design by Mollie Suss)
Advertisement

By the mid-1980s, English stadiums were crumbling, the quality of play was declining and violence between fans was endemic.

But businessmen like David Dein, Alan Sugar, Alex Fynn, and Irving Scholar made it their mission to resurrect the sport in their native country. They spearheaded the creation of the Premier League, a new top-flight for English soccer that would soon become the most lucrative sporting product ever created — a global cultural phenomenon broadcast to more countries than there are British embassies by restructuring team organizations, adopting modern marketing techniques and brokering TV subscriber deals.

Since then, Jews have bought and sold clubs up and down England and turned some of them into multi-billion-pound machines. They have helped bring the best minds and brightest talents to ply their trades on fields from Burnley to Brighton.

“There was this flood of Jewish involvement off the pitch,” said Anthony Clavane, a historian at Essex University and author of the definitive book on Britain’s Jewish footballing history, “Does Your Rabbi Know You’re Here?” “The doors of football had opened.”

Jews became involved at almost every level in English football: from owners to prominent agents, commentators to administrators. There have since been two Jewish chiefs of The Football Association, English football’s governing body. Seven Premier League clubs — including some of the most successful, such as Chelsea, Tottenham and Manchester United — are owned by Jews.

Even the historically large Jewish followings of clubs like Tottenham, Arsenal and Watford seemed to grow. By the mid-1990s, Jews were twice as likely to be football fans than other Britons, according to a poll by the Institute for Jewish Policy Research. And in 1996, the unofficial anthem of the English national team — “Three Lions” — was co-authored by Jewish comedian David Baddliel.

“This represented the fact that the community felt not just accepted, but invested in football,” Clavane said. “It was emotionally invested, financially invested. It is almost as if part of your Jewish background is defined by football.” 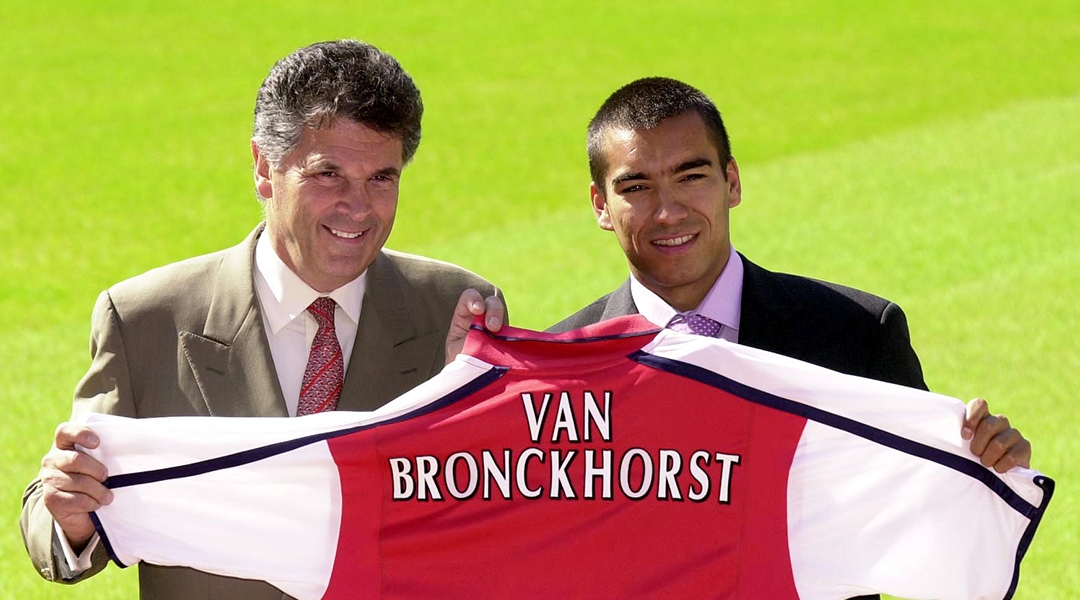 Jews’ increasing ubiquity around the pitch has, however, been mirrored by their near total absence on it.

Since 1992, only one British-born Jew has ever played in the Premier League. There are currently only three Jews playing across the entire top four professional English leagues: Wycombe Wanderers’ Joe Jacobson, Accrington Stanley’s Dean Furman and Crewe Alexandra’s Scott Kashket.

“I’ve been asked so many times,” said Jacobson, the still fresh-faced 35-year-old Welsh captain of Wycombe, which plays in League One, two tiers below the Premier League. “I’ve had players come up to me and ask: why are there so few of you?”

When Jacobson nervously trotted onto the pitch in July 2006 for his debut as a player for Cardiff City, then in the Championship league, one tier below the Premier League, he was the first British-born Jew to play professionally in over two decades.

“I remember thinking ‘wow,’ but also how incredible it was that there hadn’t been anybody else in the meantime,” he said.

The London-based Jewish Chronicle soon declared that Jacobson’s breakthrough was “proof that this community does not stop at owning clubs and trading players.”

The situation had been building for years. The famine of Jewish footballers had given rise to an increasing feeling that Jews “just didn’t do” football. In 1982, Howard Jacobson — now one of Britain’s best-known Jewish writers — declared in his debut novel “Coming from Behind” that playing football was probably “the most un-Jewish thing he could think of.”

Jews had once been among the most creative and tactically astute figures in the game, and they were so commonplace in professional British soccer that they weren’t noticed.

“Jews were very well represented on the pitch in the first 50 years of the 20th century,” Clavane said. “They were probably overrepresented. They just weren’t known about. They weren’t made a fuss about by either their own community, or people outside their community.”

Morris, who later worked as a diplomat in Sweden and helped Allied prisoners of war return to Britain before emigrating to the United States, was voted as Swindon Town’s greatest-ever player by their fans in 2013. He still holds the club records for most goals scored in a match, season and club career, 89 years since leaving Swindon, a small city outside of London. 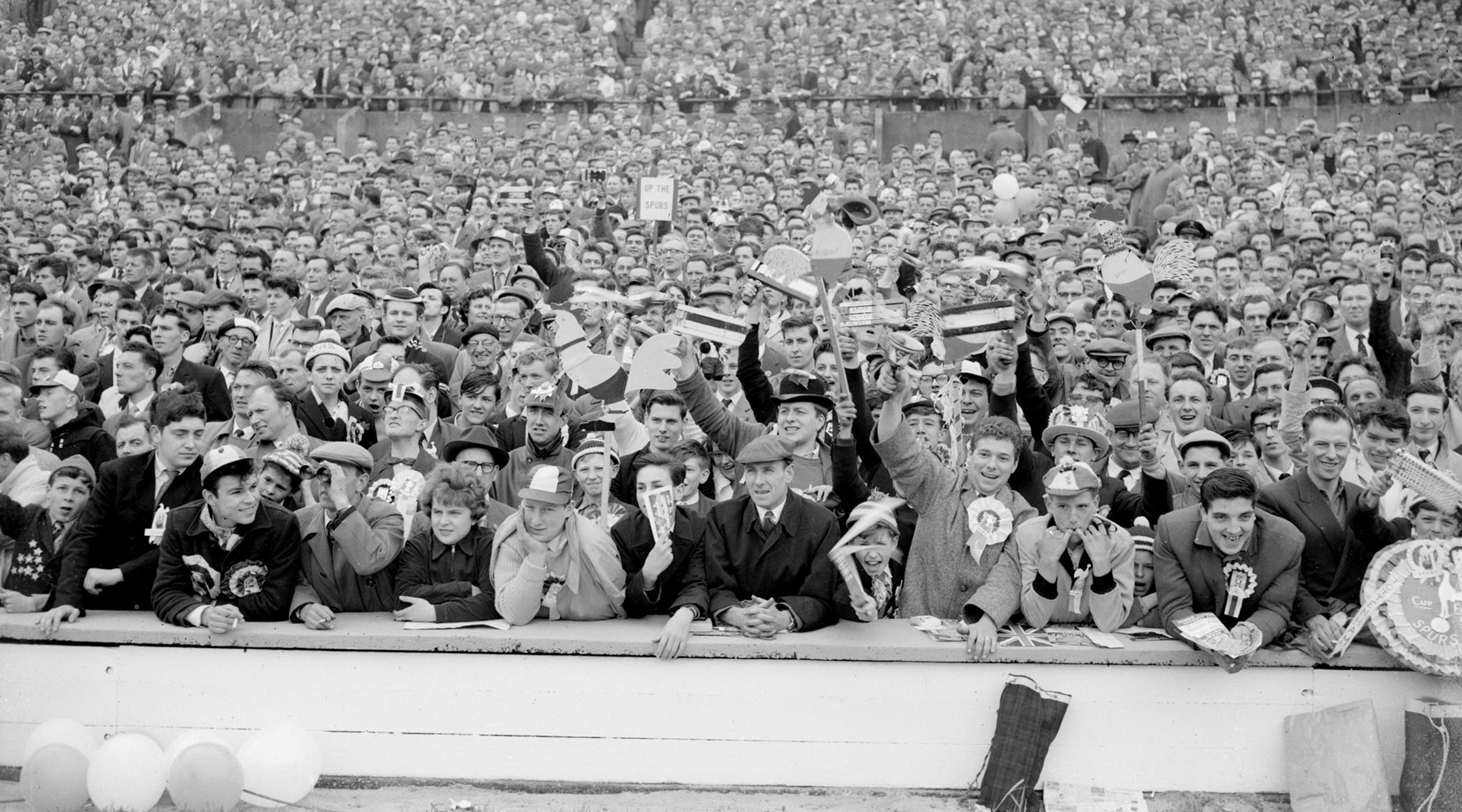 Tightly packed supporters of Leicester City and Tottenham Hotspur shown at Wembley Stadium in London before the kick-off of the 1961 FA Cup Final. Tottenham fans have long called themselves the “Yid Army.” (PA Images via Getty Images)

Jews’ involvement in soccer — traditionally played on a Saturday — was a touchy subject in Orthodox communities. Clavane theorized that this actually gave some Jewish players extra motivation.

“They wanted to prove their identity as not being their parents — Yiddish-speaking Eastern European immigrants — but as English Jews who played the English game,” he said.

By the mid-1930s, Jews were reported to make up a third of the crowd at Tottenham Hotspur games. Tottenham became identified in English soccer culture as a “Jewish club,” something which led rival supporters to taut Tottenham fans with antisemitic abuse. For decades, Tottenham fans have referred to themselves as the “Yid Army, and only this month did the club ask their fanbase to “move on” from their use of the term.

An issue of class

Since the mid-1960s, however, only a tiny handful of British Jews have broken through into the ranks of the playing elite.

That trend coincided with British Jews’ economic ascension, as they were becoming an overwhelmingly middle-class community. Upwardly mobile Jewish parents encouraged children to pursue careers in white collar fields, and this shrank the pool out of which Jewish footballers had once emerged.

Winger Mark Lazarus, who scored the winner in the 1967 FA Cup Final for West London side Queens Park Rangers; wandering midfielder-turned-agent Barry Silkman; and player-turned-coach-turned-commentator David Pleat are among those who made it.

Tellingly, the Jews that have played in England in recent years have mainly been Israelis from working-class backgrounds, such as Ronny Rosenthal, Yossi Benayoun and Tomer Hemed.

“It is a simple thing of class for me,” Clavane said. ‘If you go to any country where football is working class and where the Jewish community is predominantly working class, which it was in Britain until the middle of the 20th century, then you will see Jewish footballers.”

Jacob Steinberg, a sportswriter for the Guardian, agreed.

“If you are from a middle-class background, then maybe you are getting pushed more towards the academic-side of things,” he said. “If you are in that kind of background, then you are maybe not quite as focused on trying to get into professional sports. It is broadly speaking a working-class sport.”

For many, this dynamic has translated into a perception that young Jewish players are not driven enough to make it in the professional game.

Joe Jacobson experienced the dynamic firsthand. He said as he made his way through the Cardiff youth system as a teenager, he played against peers “for whom the be-all and end-all was football.”

“They weren’t from the best backgrounds, and it was all about trying to play all the time,” he said. “They had their parents pushing them and they were desperate for their kids to make it — a lot of these families see a lottery ticket with their kids if they can push them as far as they can. In the Jewish community, it is not seen to be a sustainable career or one that you can rely on, and I think that that is why there aren’t as many kids pushed in that direction.”

The decline of the Sunday Leagues

Danny Caro, former sports editor of the Jewish Chronicle, has spent years both playing in and covering the lowest rung of English amateur soccer: the Sunday Leagues.

Every week, just like thousands of other Britons, Jews show up to play and watch local sides battle it out. The oldest Sunday League, founded in 1899, was made entirely of Jewish teams. Nowadays the amateur game across Britain is suffering as local teams compete for fans with professional teams and deal with poor facilities and lackluster administration. The Jewish presence is diminished as well.

Professional scouts used to scour Sunday League teams, including Jewish ones, for future stars; these days they tend to look elsewhere.

“The only way you can get into an academy is by being recommended or being scouted — and for that to happen a scout has to see you or your team play,” Jacobson said. “If they aren’t at the games, then that’s impossible to do.”

There is, however, one remaining amateur all-Jewish team participating in the main pyramid of English football — technically separate from the Sunday Leagues in the same set of tiers as the Premier League — the Maccabi Lions from Barnet.

The Lions, who play on Saturdays, fight it out in England’s ninth tier and play with a Star of David as their club crest.

Within the Jewish community, however, few seem to be particularly bothered that only a tiny number of Jews have made it to the Premier League.

“It would be nice to have a great Jewish sporting hero,” said Yigal Chazan, 59, a lifelong Jewish Sunderland fan. “But it’s not a big issue.”