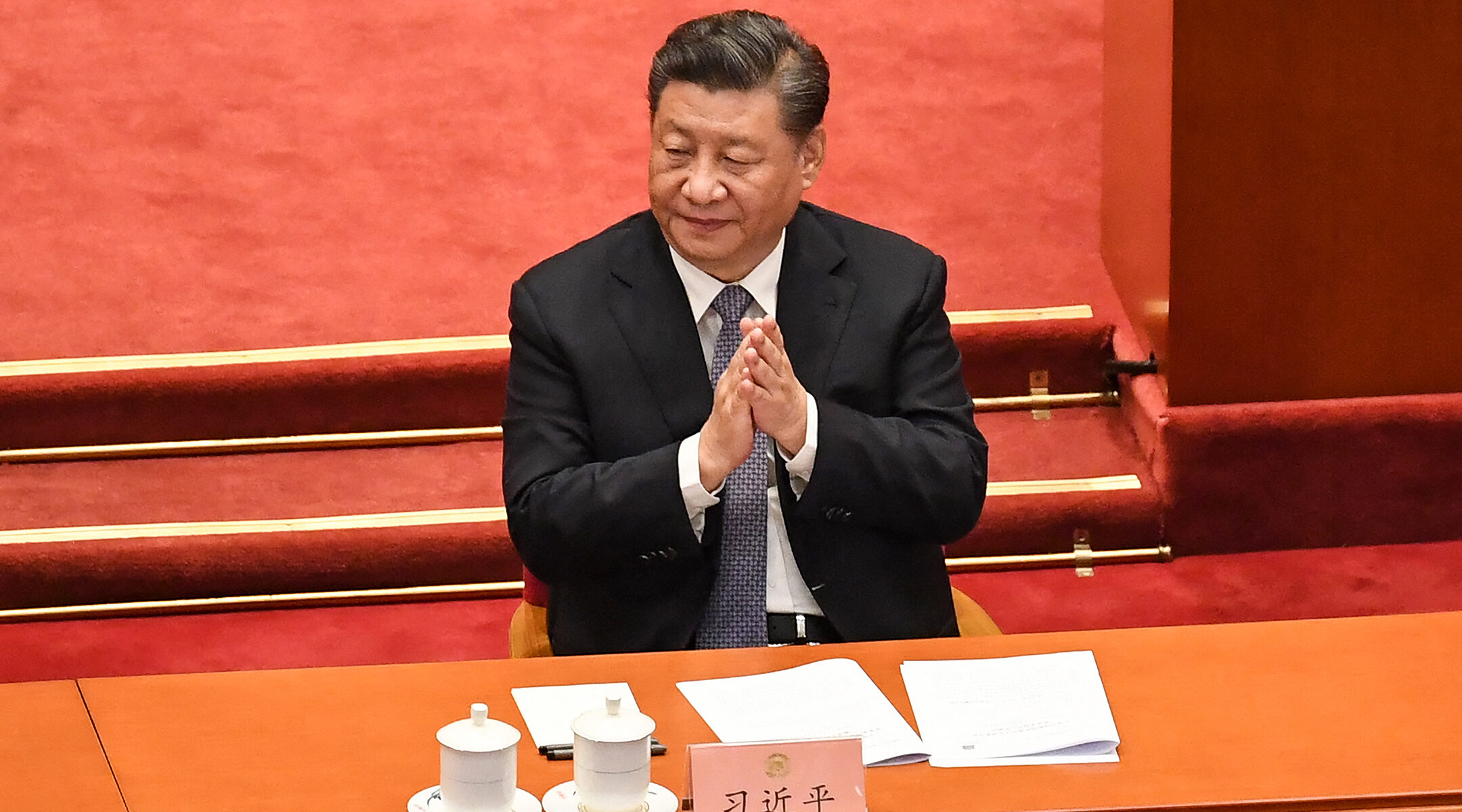 TAIPEI (JTA) — Many countries have roundly rejected Russian President Vladimir Putin’s argument that his attack on Ukraine is needed to achieve the “denazification” of that country. But the argument is alive and well in Chinese state-run media.

“Russian President Vladimir Putin mentioned in a televised speech a few days ago that the military operation against Ukraine is aimed at protecting the people who have suffered abuse and genocide by the Kyiv regime for eight years. For this reason, Russia will seek to demilitarize and de-Nazify Ukraine,” one article on the state-backed site Wen Wei Po read.

China is in an awkward position as Russia wages its war in Ukraine: Beijing has interests in both Russia and with the West, so it has refrained from antagonizing Putin while also not openly supporting him. The New York Times reported that, behind the scenes, Chinese officials had asked Putin to delay his planned invasion until after the Beijing Olympics. Publicly, Chinese officials have said that China respects Ukraine’s territorial integrity.

This week, China was one of 35 countries to abstain from a United Nations vote to condemn Russia — placing it well outside the mainstream, but also not in the tiny minority of nations to side with Russia and oppose the resolution.

Chinese media offers another clue about where the government stands on the war Putin started, and on his reasons for starting it. (Chinese news media is subject to heavy government censorship and can be understood as reflecting the official state position.)

“When Russian President Vladimir Putin declared military actions against Ukraine, one of his slogans was to order ‘denazification’ of Ukraine. Soon after, in China’s cyberspace, Putin’s remarks invoked the memories of many Chinese citizens,” the state-backed site Taihai Net wrote in a Feb. 28 story.

Chinese social media users have also used Russian talking points about Nazis, according to a New York Times report that said many users are “bringing up the Azov Battalion as if it represented all of Ukraine.” The ultranationalist paramilitary group has a reputation for including neo-Nazis and participating in antisemitic displays. But it numbers at most several hundred in an army of about a quarter million.

Overall, the discourse seeks to rationalize the Chinese state’s behavior in Hong Kong, widely perceived internationally as an assault on democracy, while simultaneously attacking the United States, according to an analysis by the Taiwan-based Information Operations Research Group, an organization that researches Chinese influence and media manipulation in Taiwan.

In 2019, Hong Kongers began protesting an extradition law that most saw as an overreach of China’s power into the region. The bill was eventually scrapped, but a 2020 national security law has since led to arrests of activists, closures of independent news outlets and a mass exodus from the region.

This is not the first time that Ukraine and Nazism have entered the political discourse in China. Last year, state-backed news organizations criticized the United States and Ukraine after the two countries voted against a United Nations resolution aimed at “combating glorification of Nazism, neo-Nazism and other practices.”

At the time, the United States argued that the resolution represented “thinly veiled attempts to legitimize Russian disinformation campaigns denigrating neighboring nations and promoting the distorted Soviet narrative of much of contemporary European history, using the cynical guise of halting Nazi glorification.”

That disinformation campaign has kicked into high gear in recent weeks, with Putin saying repeatedly that Ukraine is run by neo-Nazis and has an army filled with them.

Ukraine’s president, Volodymyr Zelensky, is Jewish and lost family members to the Holocaust. “How could I be a Nazi?” he asked in an appeal to Russians on the eve of the war.

Invocation of the Holocaust in political propaganda isn’t new for China. State media has criticized other countries such as Lithuania — whose relationship with China has cooled since last year — by pointing to historical antisemitism and the Holocaust. The Chinese state has also compared 2019 protests in Hong Kong to the Holocaust and claimed responsibility for saving Jewish refugees in Shanghai during World War II. While the city did provide refuge to tens of thousands of Jewish refugees from Europe, it was at the time governed by several powers. The People’s Republic of China was not founded until 1949.