Idaho Lt. Gov. Janice McGeachin spoke to white nationalists a week after she asked a rabbi if she could help fight antisemitism 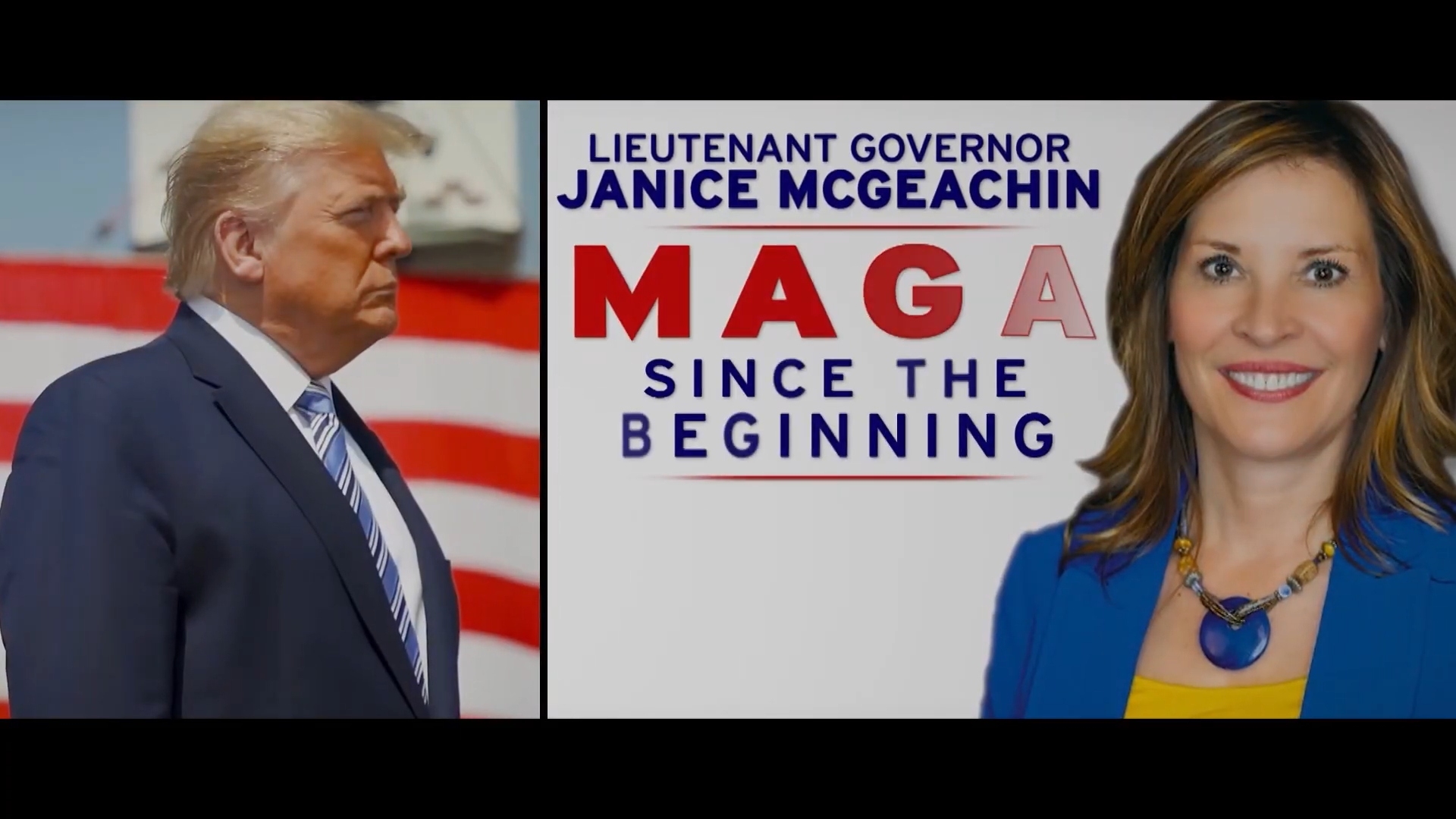 A screenshot from a campaign video for Janice McGeachin, who is running for governor of Idaho, posted Feb. 7, 2022 (YouTube)
Advertisement

(JTA) — When Rabbi Dan Fink saw that the lieutenant governor of his state had just spoken to a white nationalist group helmed by a Holocaust denier, he was shocked.

After all, he had just gotten a letter from Janice McGeachin, Idaho’s Republican lieutenant governor, asking him to join her in working on a task force to combat antisemitism.

The invitation had surprised Fink, too, because he thought McGeachin’s far-right politics and militia bedfellows presented the most urgent threat to Idaho’s Jews. But he had taken her at her word and was considering her offer — before seeing McGeachin take the stage at the America First Political Action Conference, convened by Nick Fuentes, a Holocaust denier who peddles antisemitic tropes.

“The tone-deafness of it is just stunning,” Fink told the Jewish Telegraphic Agency on Tuesday. “I don’t know whether I want to laugh or cry. I kind of want to do both.”

Now, Fink, who leads Congregation Ahavath Beth Israel in Boise, is among 31 clergy members in Idaho to have called on McGeachin to resign. Their public call is the latest of a growing number of other Republicans have come under fire for speaking to the conference. It also highlights the challenges Jews face in navigating the melding of the far right with the Republican establishment, where antisemitism can become a divisive issue.

Fink became Idaho’s first full-time rabbi when he was hired at his synagogue in 1994 and is one of just three rabbis working in the state.

McGeachin, who has secured former President Donald Trump’s endorsement in her run for governor, has depicted Republican Gov. Brad Little as insufficiently conservative. She garnered national headlines when she used executive powers vested in her office while Little was out of state for a day to ban mask mandates and to ask National Guard troops to head to Texas to protect the border.

McGeachin also has a history of associations with the far right, said Stephen Piggott, a program analyst at Western States Center, which tracks extremist activity.

“She’s posed for photos with paramilitary figures, and also white nationalists,” he said, naming Vincent James Foxx, a Holocaust denier. McGeachin has said she did not know who Foxx was when they posed together.

After a series of antisemitic incidents took place in Boise late last year, there were calls on the municipal government to set up a task force. In a letter that Fink received in mid-January, McGeachin said she wanted in on the task force, and that she wanted him on board. She was drawn to the idea, she said, by her Christian faith and support for Israel, which she characterized as under attack by the political left.

“I have repeatedly expressed my support of the people of Israel, and against business deals with Iran, BDS, or the funding of the UNRWA and others,” she began. BDS refers to the movement to boycott, divest and sanction Israel, and UNRWA is the United Nations agency that assists Palestinian refugees and their descendants.

She referred to the defacement in December of an Anne Frank memorial in Boise. “I have questioned if the governor’s office has followed up in holding those accountable who have been a part of the attack on our Jewish community,” she said.

“As a Christian, I am called to help the people of Israel,” she wrapped up.

Fink’s initial response, he recalled, was one of disbelief. He believes that the threat facing Idaho’s Jewish community, numbering in the low thousands, is not with harsh criticism of Israel, but with the militias that make up a base of McGeachin’s support.

“My first thought was, you’ve got to be kidding me,” he said. “It seems like you’re missing the point with what we’re dealing with locally.”

Still, Fink took the request as an opening for dialogue. He hand-delivered a note to her office in the Capitol in Boise, then followed up with a more detailed response explained why he did not think he and McGeachin would be productive partners on an antisemitism task force.

“Stunningly absent from the materials you sent me is a clear and unequivocal condemnation of extremist anti-government and white nationalist groups that my community and I consider the most dangerous antisemitic threat in this very conservative state,” Fink wrote in a letter he first shared with the Idaho Capital Sun. “You give succor to those groups when you refer to the United States as a Christian nation, as you do repeatedly in the … materials attached to your letter.”

McGeachin wrote Fink a follow-up letter on Feb. 16. She did not directly address his previous letters, but she appeared to have considered his arguments. Instead of pinning antisemitism on the left and engaging in political attacks, she recounted in detail a number of antisemitic incidents in the state, and identified antisemitism as part of a broader problem of race hatred.

She concluded by saying that she was ready to join Fink to “call out antisemitism whatever form it takes.”

Fink got the letter on Feb. 25, one day after McGeachin delivered the video message to Fuentes’ group.

McGeachin’s tone in the video message was combative.

“I need freedom fighters all over this country that are willing to stand up and fight for the protection of our freedoms and liberties,” she said. “Even when that means fighting amongst our own ranks because there are too many Republicans who do not exhibit the courage that is needed today for us to fight to protect our freedoms and our liberties. We are literally in the fight for our lives.”

The speech prompted Fink to join dozens of clergy members — almost all Christian — in arguing last week that the norms McGeachin violated were so fundamental she was no longer fit to be second in command of the state.

“The views of those who founded AFPAC three years ago and who spoke alongside you don’t reflect or speak for Christianity or Christians, nor do they reflect the religious or political views of the vast majority of Idahoans,” the letter said. “In fact, they are actively antisemitic and racist, twisting religion to support their violent, terrifying vision of America, an America that excludes and expels not just religious minorities, but people of color, immigrants, refugees and many millions more.”

In a statement to the Jewish Telegraphic Agency, McGeachin’s office noted that in her letters to Fink, she expressed “opposition to all forms of antisemitism” and condemned “any assault of the Jewish people or defacing of Jewish places of worship, business, monuments, or cemeteries.”

McGeachin said on social media and in interviews with local media her accusers were unfairly indicting her over someone else’s sins. She also said she was not aware of Fuentes’ views before the conference.

“I’m just going to keep repeating the same thing, that this guilt by association that the media tries to do with conservatives, and conservatives only, is that if we ever have met somebody once or took a picture with them or ever shared a stage with somebody, ever, ever, we’re all guilty by association,” she told KTVB7, a local TV news outlet.

She said in a statement that she “never supported identity politics or other discriminatory views.”

Piggott of the Western States Center said McGeachin’s address to Fuentes’ group sets off alarms because the rise of extremist politics in Idaho could be a national bellwether.

“Idaho is a good example of what we’re seeing across the country where you have white nationalists that are seeking to build political power towards their exclusionary version of an all-white ethnostate and they’re looking to build alliances at the local level, and also with elected officials,” he said. “Their alliances with officials like Janice McGeachin lend their efforts credibility.”

In Idaho, at least one extremist is bypassing the alliance stage and is running himself: Ammon Bundy, a rancher who has threatened violence against government agents, has announced a run for governor as an independent.

McGeachin is trailing Little in the polls by a wide margin, and likely won’t win. But Fink said anything can happen in the current unpredictable national political climate, and also noted that Little has yet to formally announce for reelection.

“I don’t really want to be overconfident,” he said. “I don’t think she’s going to win, but I wouldn’t be so sure. So I think it’s really important to speak out.”