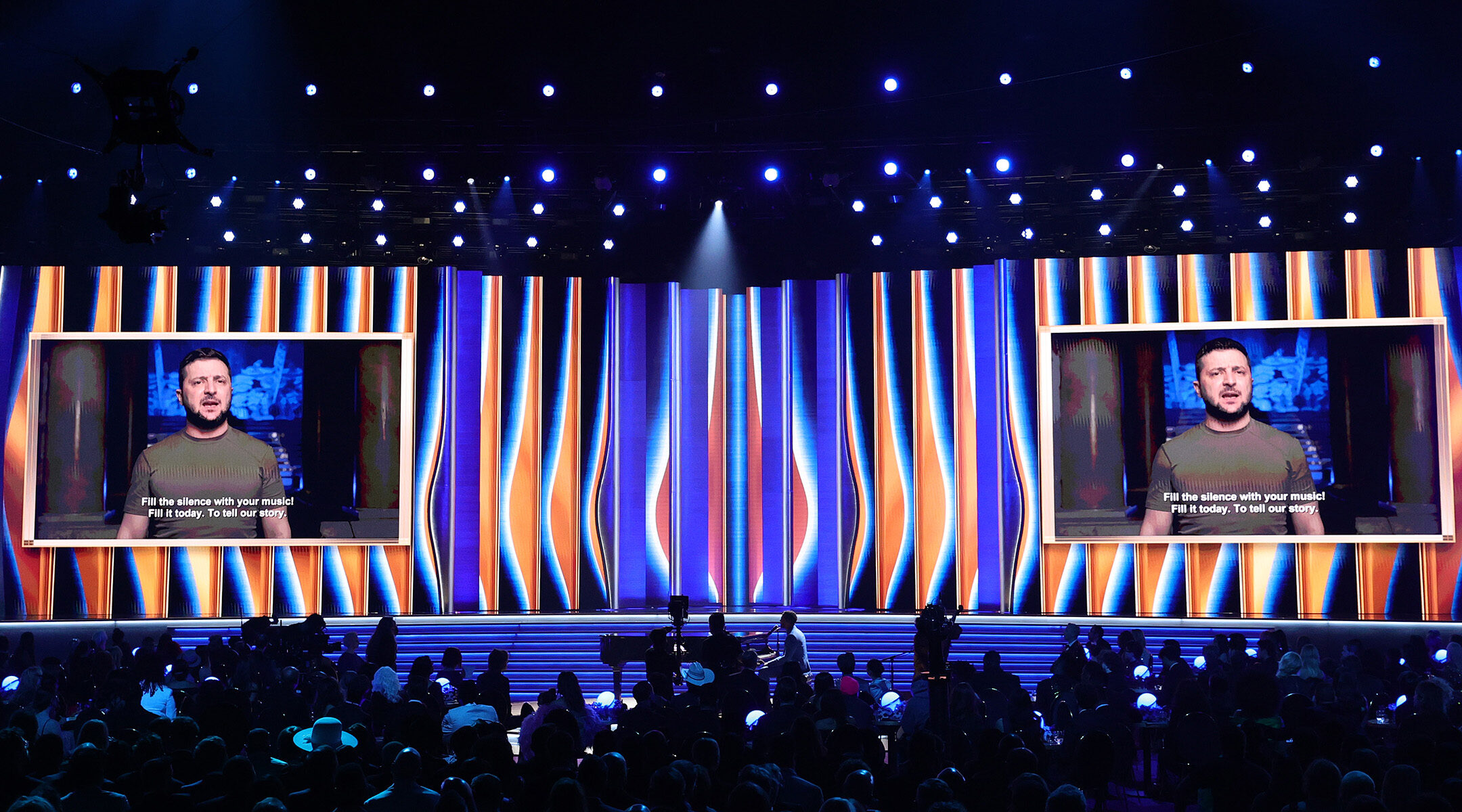 (JTA) — While the Oscars had a moment of silence for Ukraine and various onscreen messages, Sunday night’s Grammy Awards went further — with a video address from Ukraine’s Jewish president, Volodymyr Zelensky.

“What is more opposite to music? The silence of ruined cities and killed people,” he said in the prerecorded video. “Our musicians wear body armor instead of tuxedos.

“They sing to the wounded. In hospitals,” he added.

It was a dramatic highlight of the music industry’s biggest night and symbolic of Zelensky’s rise to a prominent stage in global pop culture.

Here are the Jewish winners and other Jewish moments from the festivities, which took place in Las Vegas for the first time:

–Pop star John Legend followed up Zelensky’s address with a powerful performance of a new song, “Free,” which borrowed a few lyrics from “Go Down Moses,” the famous Black spiritual song about the Old Testament’s Exodus story told on Passover. A Ukrainian refugee also read a poem live onstage during the performance.

–Jewish day school grad Jack Antonoff, who wore a Star of David necklace to the MTV Music Awards in 2017, continued his dominant reign as pop’s most in-demand producer. He won non-classical producer of the year for his work in 2021 with Taylor Swift, Lana Del Ray, Lorde and others.

-Ben Platt, perhaps the most famous alum of Camp Ramah, sang “Not a Day Goes By” from Stephen Sondheim’s “Merrily We Roll Along,” in memory of the Jewish composer behind some of Broadway’s most beloved musicals who died in November at age 91.

–Jewish rap star Doja Cat won in the best pop duo/group performance category for her song “Kiss Me More” featuring SZA. She got emotional while accepting the award.

-The Foo Fighters, whose non-Jewish frontman Dave Grohl has a history of releasing covers on Hanukkah, won best rock album for “Medicine at Midnight,” best rock performance for “Making A Fire” and best rock song for “Waiting on a War.” The band’s drummer Taylor Hawkins, who died on March 25, was given a tribute video.

–Jon Batiste won album of the year for his eighth record, “We Are.” In his acceptance speech, he called on his collaborator and the album’s executive producer Ryan Lynn to join him at the podium. Lynn did so, briefly — wearing a black kippah. No word on Lynn’s Jewish identity. “He doesn’t even work in the music industry but he’s a genius and get’s my vision,” Batiste has said of Lynn.

–Emily Bear, who has Moroccan Jewish ancestry, won best musical theater album with her collaborator Abigail Barlow for their pathbreaking “Unofficial Bridgerton Musical,” which originated as a TikTok project.