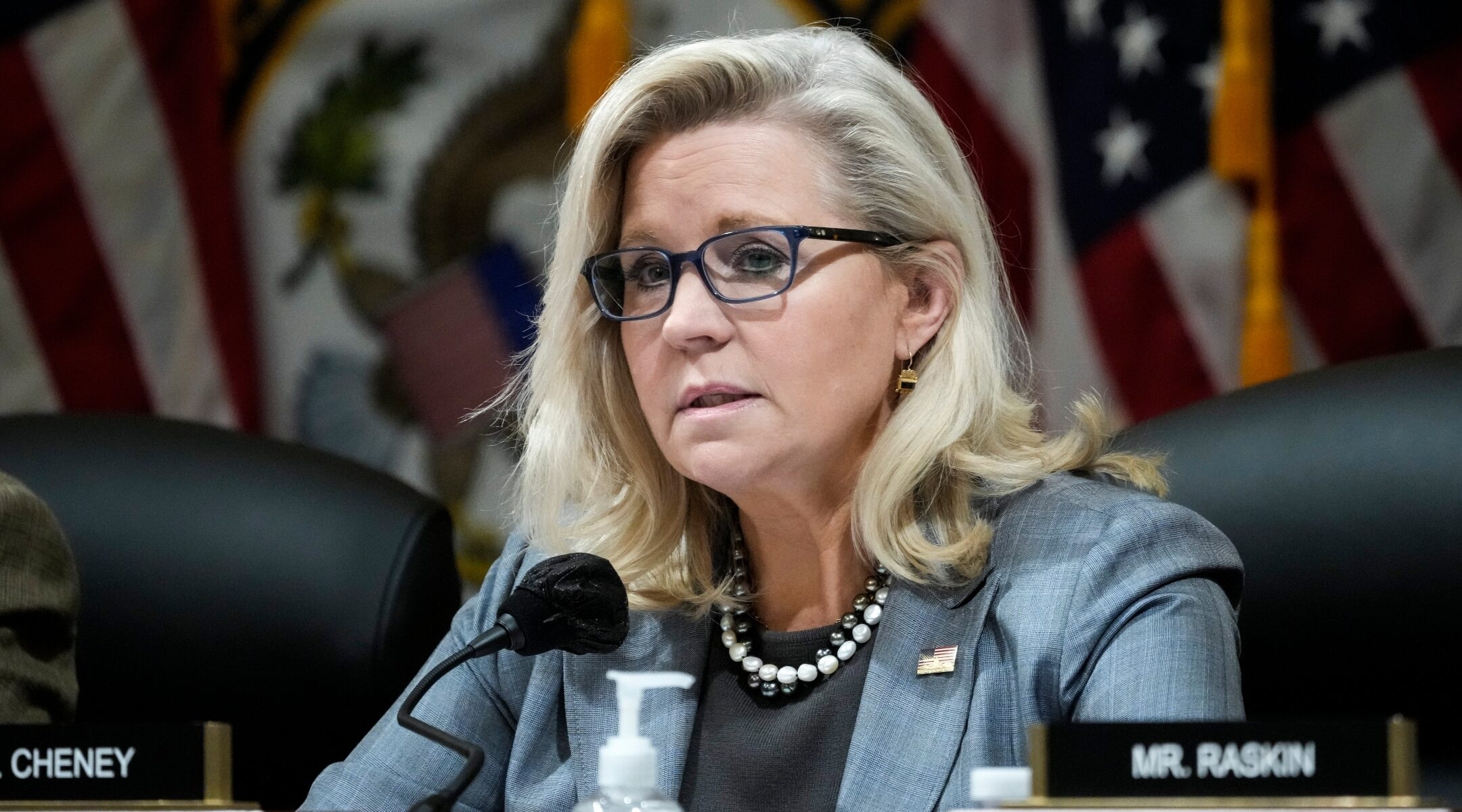 WASHINGTON (JTA) — Liz Cheney, the Wyoming congresswoman who is perhaps the fiercest critic of Donald Trump, isn’t too popular in her party these days: The House Republican caucus kicked her out of her leadership role and some influential Republicans want her out of the GOP, period.

But there’s one section of the party where she’s getting support: Pro-Israel Republicans continue to fundraise for Cheney.

Cheney’s bona fides as one of the best friends of the right-wing pro-Israel community since her father, Dick, was vice president and she held a senior Middle East policy position at the State Department, is helping her outraise her challengers in a primary in August, even though some of her erstwhile pro-Israel donors are wary of her war with Trump.

Bill Kilberg, a lawyer who is deeply involved in funding for Israel’s Hebrew University, last month held a donor bash for her in McLean, Virginia, the same tony Washington suburb where Dick Cheney is now based. Kilberg’s wife Bobbie told CNN that the couple intended to host the Cheney fundraiser at home but picked a larger venue as the RSVPs poured in.

That’s typical of the pro-Israel community, which prides itself on its loyalty to politicians that have stood up for the Jewish state for years, however dire their straits become, said Matt Brooks, executive director of the Republican Jewish Coalition. The RJC’s affiliated political action committee has endorsed Cheney and has given her the maximum of $10,000 in a cycle.

“We stand by our friends who have been leaders and supporters over the years, regardless of where they were on other external issues,” Brooks said.

Brooks noted that in addition to the Kilbergs, Jewish pro-Israel stalwarts who have held fundraisers for Cheney include Mel Sembler, the Florida-based shopping center magnate, and Eric Levine, who runs an eponymous white-shoe law firm in New York.

Cheney’s receipts with the centrist and right-wing pro-Israel communities run deep: Her father was one of Israel’s most vocal defenders in an administration already known for its friendliness to Israel. He clashed with Condoleezza Rice during the 2006 Israel Lebanon war, undercutting her efforts as secretary of state to bring Israel to heel.

Liz Cheney worked for Rice at the time as the principal deputy assistant secretary of state, focused on Middle East issues. But she clearly sided with her father over her boss during that clash — at an American Israel Public Affairs Committee policy conference in 2008, not long after she left the Bush administration, she blasted Rice’s pressure on Israel to close a peace deal with the Palestinians.

Even out of government from 2007 until her election as a Wyoming congresswoman in 2016, Liz Cheney was a frontline, pro-Israel warrior, emerging on op-ed pages as a political warrior ready for battle with lsrael’s critics. She earned cheers at AIPAC conferences blasting President Barack Obama for not following Israel’s lead in threatening military action to keep Iran from becoming a nuclear-weapon state.

Back in government as a congresswoman from a state with hardly any Jews, she assumed a role as a leader on pro-Israel issues. She co-sponsored an array of pro-Israel legislation and pushed for military engagement with Iran, a rare call even among hawkish Republicans.

Cheney took the lead in the summer of 2020 when Democrats warned Israel not to annex West Bank territory, spearheading a letter saying that Republicans would not get in the way of annexation. 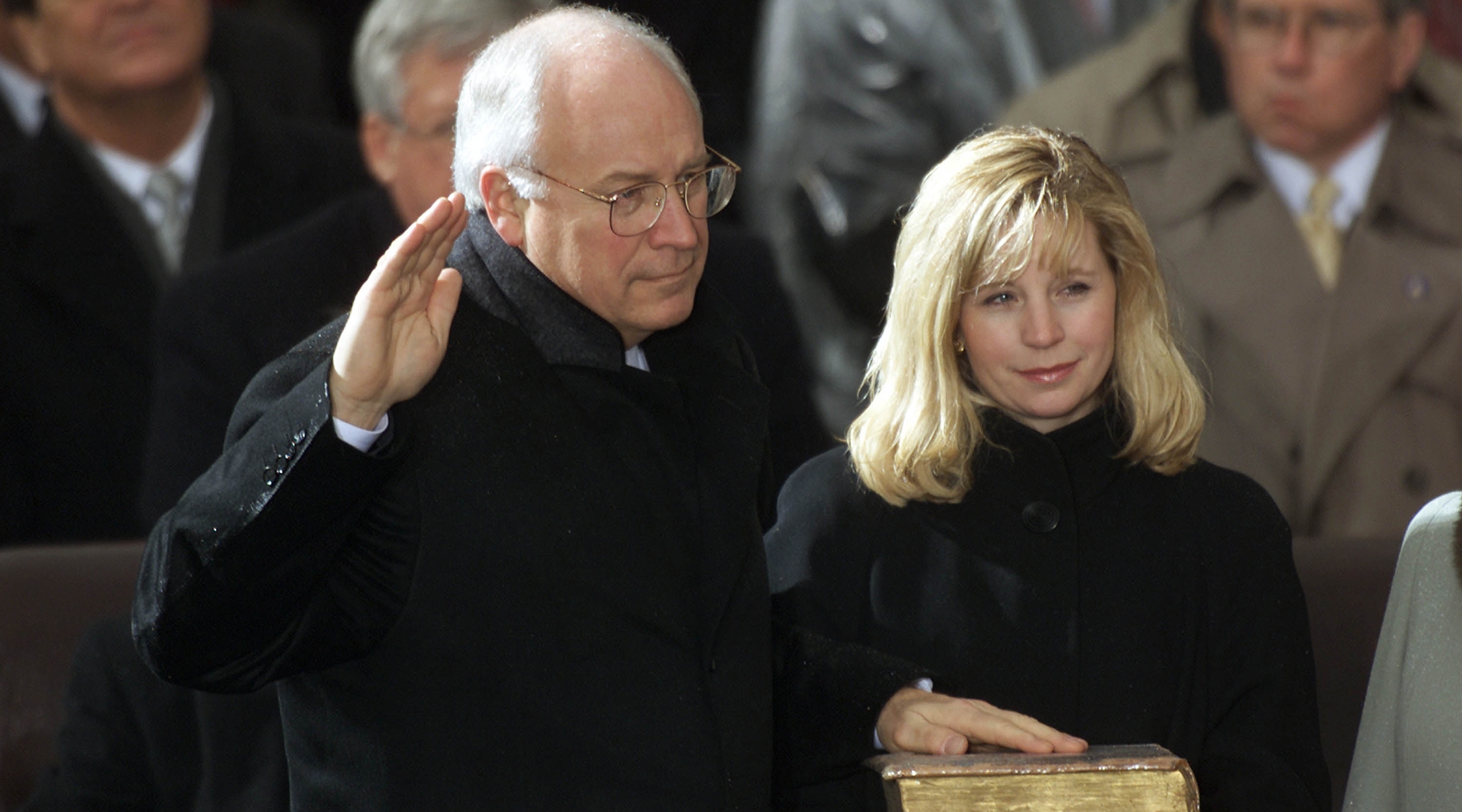 So she has the resume to sustain substantial pro-Israel support, said Fred Zeidman, a Houston businessman who is a leader among Republican Jewish fundraisers, and who is not involved in the Wyoming race one way or another.

“Anybody that was for her is going to continue to be for her,” he said in an interview. “If you’d been a supporter of hers, you’ve got to stick with it, if for no other reason, as a matter of principle.

Cheney has raised a stunning $10 million overall this cycle, with close to $3 million in the most recent quarter.

But her pariah status among Republicans complicates matters for her supporters. Cheney is not simply a Trump critic; she co-chairs the congressional committee investigating the insurrection he spurred on Jan. 6, 2021, and has said Trump may be criminally liable.

There’s no Republican who Trump — still effectively the GOP’s thought leader — hates more than Cheney. He has made ousting her his first priority and has endorsed her GOP primary opponent Harriet Hageman, an attorney. A poll in December showed Hageman leading Cheney 38%-18% in the primary in one of the most Republican and pro-Trump states — and that was before Hageman secured Trump’s endorsement.

That makes public identification with Cheney a fraught prospect. She is not among the 20 Republicans appearing on the RJC PAC’s endorsement page, but Brooks said the page is not finalized.

“By definition, our contribution to her is an endorsement,” he said. “We are continuing to roll out our lists going forward.”

For now, however, the RJC is being cautious, denying Cheney their more straightforward means of securing funds, through the RJC PAC.

AIPAC, which once had a close relationship with Cheney, did not include her in its first slate of 120 candidates endorsed by its newly established political action committee, and she has yet to be endorsed by Pro-Israel America, a bipartisan PAC run by former senior AIPAC staffers.

Both groups said that it was early days; the Wyoming caucus is in August.

“Pro-Israel America is keeping close track of all races across the country, including the primary race for Wyoming’s at-large congressional district,” Jeff Mendelsohn, Pro-Israel America’s executive director, said in an email. “We are currently very focused on upcoming spring primary elections and intend to make additional endorsements moving forward.”

“The AIPAC PAC has been in existence for less than four months,” he said. “We will continue our review and make decisions about contributions for the rest of the 2022 election cycle.”

Cheney might not be amenable to an AIPAC endorsement: She was furious with the group for including among its endorsees dozens of Republicans who refused to certify Biden as president.

“America’s relationship with Israel has never been more important,” she said last month. “Those of us who have never wavered in our support for Israel or our fight against anti-Semitism in the US & around the world want @AIPAC  members to know your leadership is playing a dangerous game of politics.”

America’s relationship with Israel has never been more important. Those of us who have never wavered in our support for Israel or our fight against anti-Semitism in the US & around the world want @AIPAC members to know your leadership is playing a dangerous game of politics.

Cheney’s campaign did not return a request for comment.

Ben Chouake, the president of NORPAC, a pro-Israel PAC that endorsed Cheney last cycle but has not this time around, said the group’s reluctance to endorse her stemmed from her dim prospects.

“That’s really terrible for an incumbent,” he said of her poll numbers. “We’ve supported her in the past, she’s good on the issues, but she has a lot of self-inflicted wounds,” he said referring to her battles with Trump in a state where the former president remains popular. “She’s taken positions that put her in a very unpopular position in her state.”

Cheney is reportedly hoping Democrats will vote for her in the primary and that Hageman will split the Trumpian vote with Anthony Bouchard, a state senator who is completely aligned with the former president’s ideals, even though he did not secure Trump’s endorsement. A bid by Trump-friendly state lawmakers to nix a Wyoming law that allows members of one party to vote in the other’s primary failed. Even so, political analysts say that it will still be hard for Cheney to eke out a win in the primary.

Hageman also has the backing of some of Cheney’s most important former allies: House Minority Leader Kevin McCarthy of California, as well as an array of donors who have given to Trump in the past.

Cheney also has some establishment backing, but from Republicans who like her have likely broken with Trump for good, including Senate Minority Leader Mitch McConnell.

McCarthy and the congresswoman who replaced Cheney a year ago as the chairwoman of the House Republican Conference, Elise Stefanik of New York, were both onetime Trump critics who are now all in with the former president. Cheney is the vanguard of a faction of the party, also led by McConnell, who believes it’s time to leave Trump behind.

“There are clearly schisms within the party, and there’s going to be people who strongly support Liz and will stand by or there are other people that won’t,” said Brooks, the RJC director. “I mean, that’s just the reality, the snapshot of where we are today.”