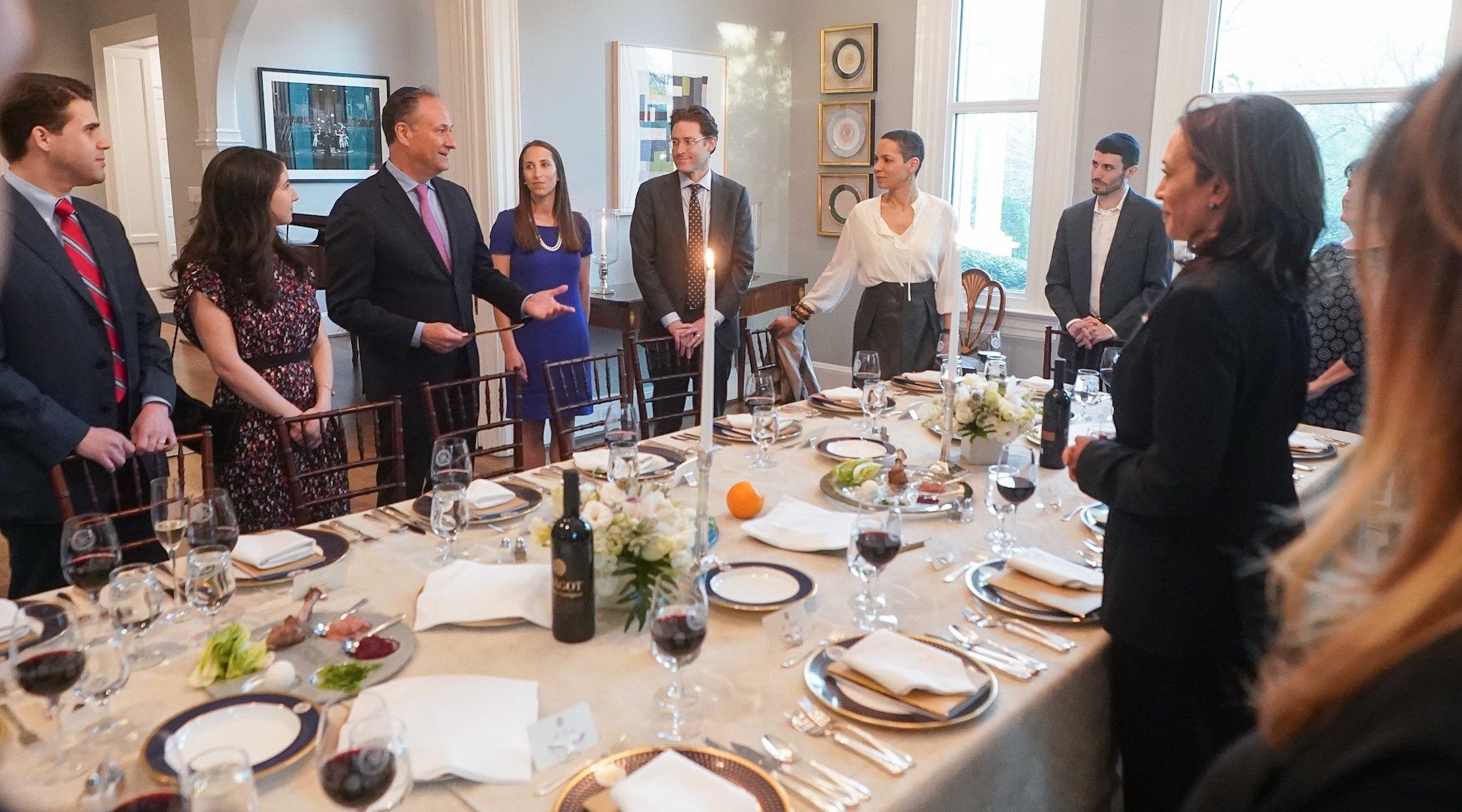 A photo posted to Twitter by Second Gentleman Doug Emhoff showed wine from the Psagot winery on the table at the White House seder, Apr. 16, 2022. (Twitter)
Advertisement

(JTA) — Wine from a West Bank settlement was on the menu at this year’s White House Passover seder on Friday hosted by Vice President Kamala Harris and second gentleman Dough Emhoff.

But a spokesperson for Harris said the choice should not be construed as a political statement about Israeli settlement in the West Bank.

“The wine served at the Seder was in no way intended to be an expression of policy,” Herbie Ziskind, an advisor to Harris, said in a tweet.

The response from the Harris spokesman came after reporters spotted a bottle of wine from the Psagot winery in a photo of the seder that Emhoff posted to social media, eliciting a flood of criticism from anti-occupation activists.

Tonight, @VP and I were honored to celebrate Passover with our hardworking staff by holding a Seder at the Vice President’s Residence.

Whether you’re celebrating with your family, your work family, or the family you have chosen, we wish you all a Happy Passover! pic.twitter.com/g9qLOHqFUM

“These photos show @VP serving wine from Psagot at Passover Seder. Psagot’s vineyards are on stolen Palestinian land. It’s not cool. It was the Trump that ‘legitimated’ the theft,” James Zogby, founder of the Arab-American Institute, said in a tweet.

The Psagot winery, which is located north of Jerusalem in the West Bank, has been active in efforts to resist international efforts to prevent goods produced in Israeli settlements from being labeled “Made in Israel.” The winery challenged a 2016 French ruling requiring wines produced in Israeli settlements to be labeled as such, though the European Court of Justice upheld the French law in 2019.

In February 2020, the winery introduced a special label named for Mike Pompeo, then-President Donald Trump’s Secretary of State, whom they thanked for repudiating a State Department finding that Israeli settlements were illegal.

The photo of the seder posted by Emhoff also showed traditional seder plates on the table alongside an orange, a more modern addition to the seder plate meant to symbolize inclusion of LGBTQ Jews at the seder. The tradition to host a seder at the White House was started in 2009 by then-President Barack Obama.