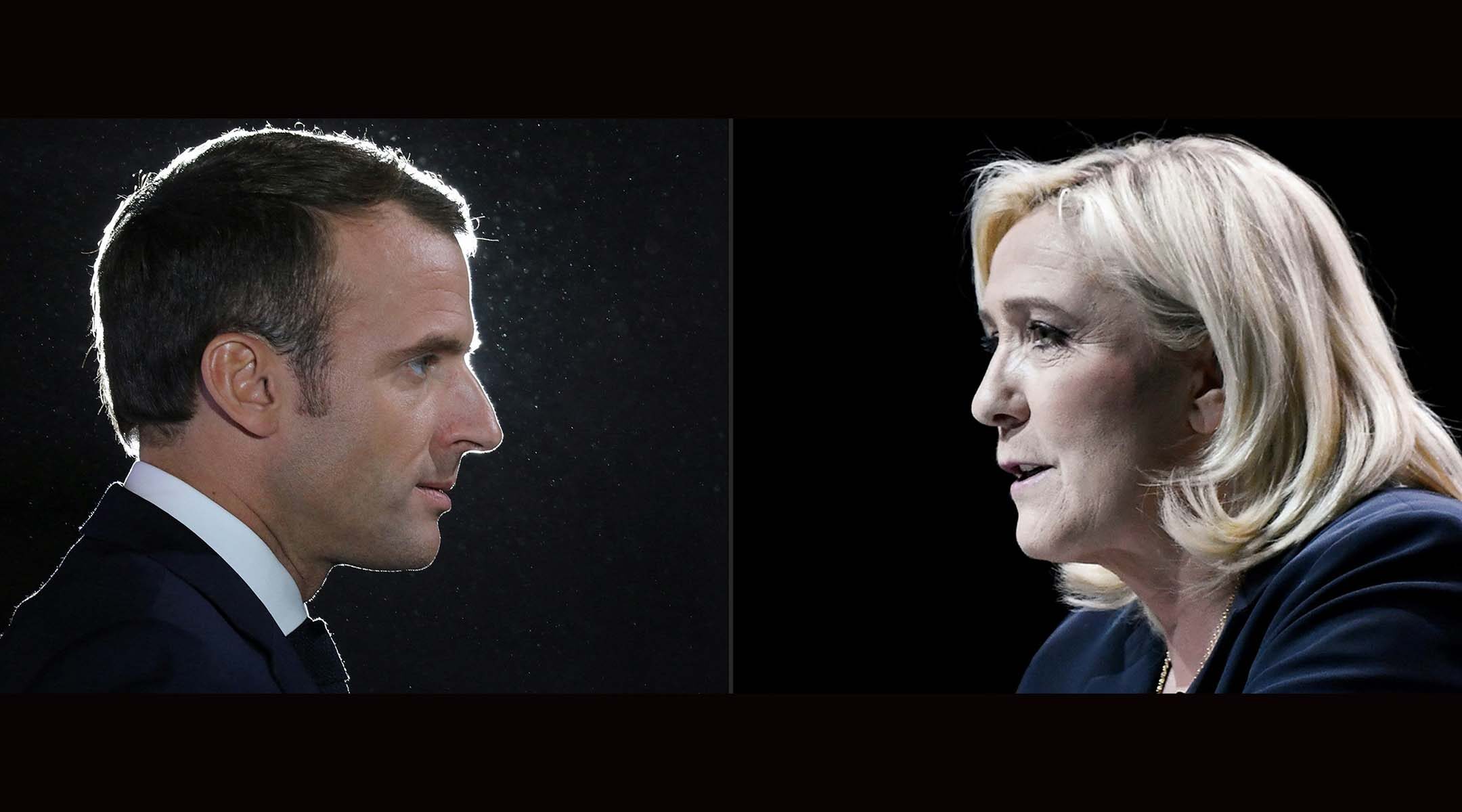 (JTA) – As during her previous two presidential runs in France, the country’s main Jewish groups have gone partisan and called on Jews to vote against the far-right candidate Marine Le Pen.

But this time the call has triggered a community-wide debate about the role of French Jewish institutions that has highlighted the growing polarization of French Jewry.

The Representative Council of Jewish Institutions of France, or CRIF, a group that lobbies the French government on Jewish issues, and the Consistoire, which provides religious services and employs the country’s chief rabbi, have become increasingly partisan over the past decade, amid a rise in the popularity of the far right, which they and many other French Jews consider dangerous.

Last week both groups urged French Jews to vote for centrist incumbent Emmanuel Macron in the second round of the presidential election on Sunday.

“Our individual freedoms, our social diversity, our tradition and the stability of our country are at stake,” CRIF said in its statement. “CRIF is calling for causing an electoral defeat to Marine Le Pen and to vote massively for Emmanuel Macron.”

The Consitoire also in turn endorsed Macron, Elie Korchia, the president of the Consistoire, confirmed to Le Monde.

It’s because “for the first time, there is a real chance that a far-right candidate might win the election,” Korchia told Le Monde.

But he also acknowledged in the same interview that French Jews are as divided politically as the rest of the country.

“Generally speaking, Jewish citizens espouse the political positions of all the other citizens,” he said.

Other Jewish institutions and figures criticized the endorsement as an overly partisan move by two groups that strive to represent all French Jews.

The Europe-Israel association is a right-leaning nonprofit that itself often calls to task politicians for perceived bias against Israel, but it rarely criticizes the CRIF and the Consistoire in the way it has in the lead-up to Sunday. Jean-Marc Moskovicz, the head of the association, told the Jewish Telegraphic Agency that he believes that most of “the Jews of France do not appreciate this call to vote for Macron.”

“We believe everyone must inform themselves and make up their own mind without being told what to think,” the group said in a statement.

The backlash has also underlined the creeping acceptance of Le Pen’s National Rally party and other far-right figures among Jewish voters.

Tribune Juive, a prominent communal paper, on Monday ran an op-ed by acclaimed psychoanalyst and author, Charles Rojzman, in which he offered thinly-veiled criticism of the CRIF and Consistoire leadership.

“Their egoism even makes them dismiss as fascists the common people because they buy into rhetoric that allows them to protect their identity,” Rojzman wrote, taking to task communal leaders, whom he did not name. French Jewry’s rank and file, he added, is “threatened by what we call ‘scum, enemies of coexistence,’” he wrote, using common euphemisms for Muslim extremists.

Their partisanship “is a little like what the Islamists did, calling on their followers to vote for Jean-Luc Melenchon,” Lledo wrote, referencing the far-left presidential candidate who came in third in the first round of the presidential elections.

The latest polls show Macron leading Le Pen by over 10 points; he won in their 2017 runoff round by over 30 points.

Le Pen has headed the National Rally since 2011, when it was still called National Front. Under her, the party has moved from a fringe movement with no power to a formidable political force that appears to be growing. In addition to achieving the party’s best electoral result ever in the 2017 elections, Le Pen has led National Rally to win several mayoral elections.

A staunch nationalist against increased immigration, Le Pen has told Jews that she will be their “shield” against antisemitic violence by Muslims. But her plans to curtail religious freedoms to counteract the presence of Islam in French society would mean a ban on wearing head scarves and kippahs worn by Jews, she has acknowledged. She invited French Jews to make that “sacrifice” for their country.

Jewish support for National Rally was nonexistent under her Holocaust denier father Jean-Marie Le Pen, who was kicked out of the party in a bid to rehabilitate its reputation. But a 2014 poll suggested that National Front’s popularity among French Jewish voters rose to 13.5% under his daughter.

Many Jews, Korchia added, were supportive of Éric Zemmour, a Jewish far-right politician who holds several similar policy stances to Le Pen but who failed to advance to the second round. In Israel, 53% of the votes by French citizens in the first round went to Zemmour.

Korsia, the chief rabbi, has called Zemmour, whose children and wife are Jewish and who attends synagogue, an antisemite and a racist. Zemmour has three convictions for inciting hatred against certain ethnicities — one of them was for saying most drug dealers in France are Arabs or Africans.

During the final days of his presidential campaign, Zemmour made the death of a young Jewish man, Jérémie Cohen, a central theme. Cohen was killed in February in a collision with a tram in a suburb of Paris, and his death was treated as a traffic accident until his family provided Zemmour with footage they had obtained independently. It showed Cohen running to the tram tracks after an altercation with several men on a street in Bobigny, a working class suburb of Paris with a large Muslim population.

At election rallies, Zemmour presented the incident as part of what he described as a lawlessness problem in some French municipalities, especially ones with many immigrants from the Middle East and Africa. These issues are widely believed to be part of the reason that French Jews are apparently becoming more open to voting to far-right candidates.

“Éric Zemmour ran on a number of issues, traumatic issues for French Jews, that are not imagined: They are real,” Korchia said.