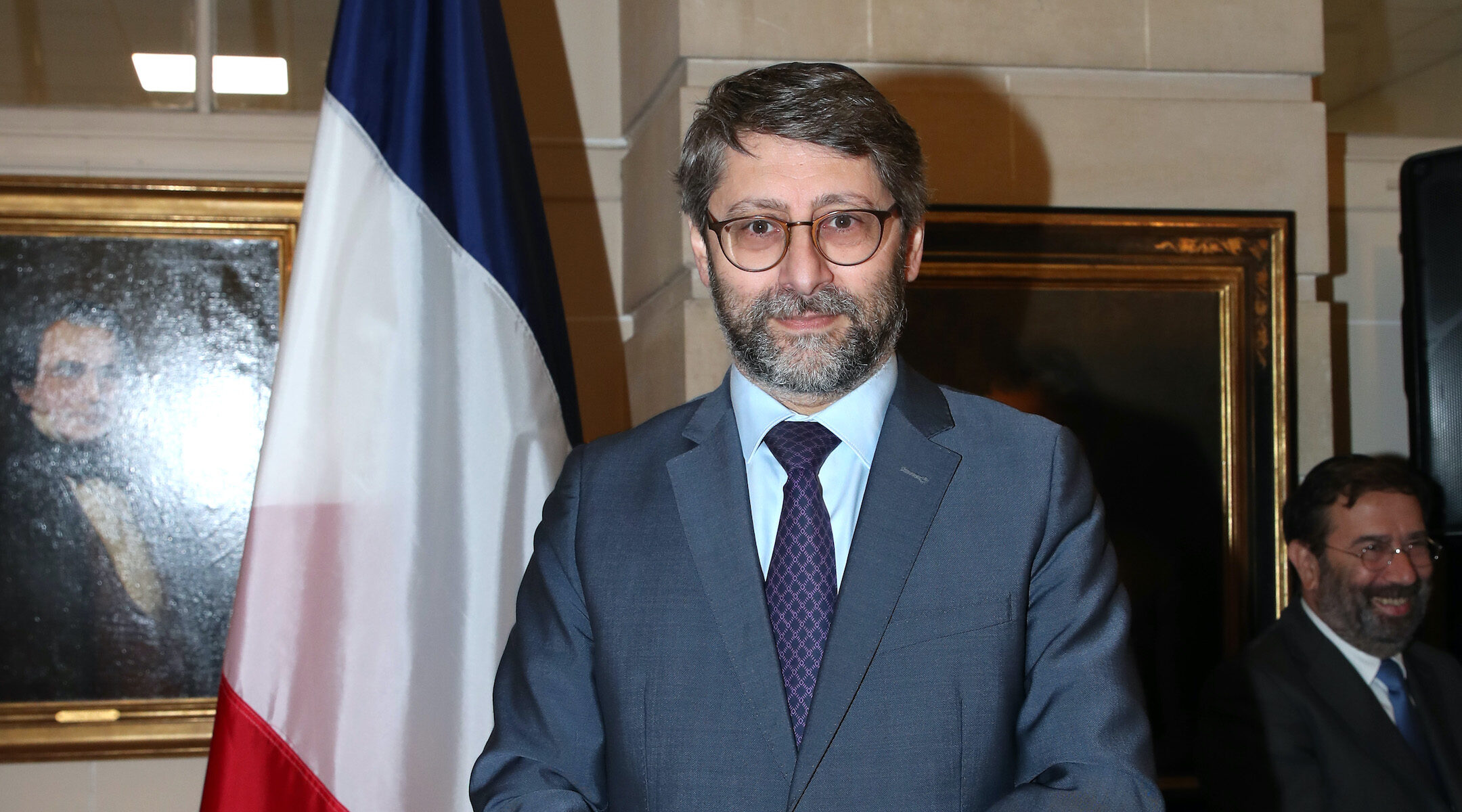 The trademark optimism of Haim Korsia, the chief rabbi of France, is coming under fire for the first time in the Jewish community. (Bertrand Rindoff Petroff/Getty Images)
Advertisement

(JTA) — French Chief Rabbi Haim Korsia has long argued that his community is inseparable from the wider French society, which he insists will overcome its many challenges, including the anti-Semitism that has driven thousands of French Jews to seek a more secure existence in Israel.

But this hopeful message, a Korsia trademark, is for the first time coming under fire from prominent French Jews who accuse the chief rabbi of failing to recognize a bitter reality and unfairly faulting those who choose to leave.

In op-eds and social media posts in recent weeks, French-speaking Jews in France and Israel have pushed back against Korsia’s optimistic take and his assertion that fear should not be the basis for emigration by French Jews. The debate, set off by a controversial and deeply pessimistic op-ed in the mainstream community weekly Actualite Juive, has dragged into the open a conversation about the fate of French Jewish life that more commonly takes place behind closed doors.

“It may actually be time to say aloud what many think inside: France is overrun,” wrote the op-ed’s author, Ariel Kandel, the Jerusalem-based director of an organization promoting French immigration to Israel and the former head of the Jewish Agency’s France operations.

“It’s overrun in the fight on COVID-19, in the distribution of vaccines, but also in the fight against radical Islam and anti-Semitism,” wrote Kandel, who is well-known in the community.

Kandel cited the common concerns of Jews in France for their security, recalling being harassed for wearing a yarmulke as a teenager on the Paris subway. But he went further in suggesting that French-Jewish patriotism amounts to little more than cheap symbolism.

“Jews live in France for practical reasons. They love French culture, but their support for France is mostly on the pitch at soccer matches,” Kandel wrote. “It’s no coincidence that so many children of our community leaders live in Israel.”

Despite years in which French Jews have been the target of terrorist attacks and hundreds of violent assaults, their leadership and media and notable figures have rarely voiced hopelessness about the future. Korsia has taken the lead in combating perceived defeatism.

He called Kandel’s piece “biased, bitter, and one that caricaturizes a whole society.” Noting the French Jews who had died fighting for France in the 20th century, Korsia, a former military chaplain and self-described French patriot, wrote in Actualite Juive that they “died because they were French, not because they were Jews!”

Korsia has consistently argued positions to this effect, relentlessly insisting that French Jews assert their rightful place in French society and immigrate to Israel only as “an ideological and spiritual choice,” not because of fear for their safety.

In 2015, he pushed back forcefully after Israeli Prime Minister Benjamin Netanyahu told European Jews to come “home” to Israel following a deadly terrorist attack on a synagogue in Denmark. In 2016, Korsia admonished a community leader from Marseille, Zvi Amar, for suggesting amid a spate of anti-Semitic stabbings that Jews avoid wearing yarmulkes in public.

“We will not cede an inch, we will continue to wear the kippah,” Korsia said.

Roger Cukierman, who at the time was the president of the CRIF umbrella of French Jewish communities, warned against voicing positions like the one put forth by Amar, as they “translate into a defeatist attitude of resignation.”

Such assertions have previously earned little public rebuke, even as France endured a series of jihadist attacks over the past decade, including several that have targeted Jews. In 2012, four Jews were killed at a Jewish school in Toulouse. In 2015, four more were killed at a kosher supermarket in Paris.

Despite vows by the government to stop the violence, each year dozens of anti-Semitic assaults occur in France, including cases of rape, murder and even torture.

Particularly painful to French Jews are the cases in which they believe the judiciary has failed to deliver justice. In one such case from 2017, a Muslim man pummeled his Jewish neighbor, Sarah Halimi, to death for 30 minutes at her home and then threw her body out a window while shouting about Allah and killing “the demon.” A court deemed him not accountable for his actions because he was high on marijuana at the time.

Anti-Jewish violence in France has pushed immigration to Israel to new heights. At least 33,278 French Jews have immigrated there since 2013, more than double the 15,401 French citizens who made that move in the prior seven years. Tens of thousands more have moved internally, from dangerous neighborhoods to safer, heavily Jewish areas.

Kandel’s op-ed has brought the question of what this all means for the future of French Jews into the open, and found support from some of Korsia’s prominent constituents, who are loath to fault Jews who choose to emigrate. Rabbi Mikael Journo, the secretary general of Korsia’s own Association of French Rabbis, admonished Korsia in a Jan. 29 op-ed for insensitivity to Jews who leave France out of fear.

“We have the responsibility as religious leaders not to fault those who decide to leave and to support them no matter their reasons,” Journo wrote. “Who are we to judge those who want to be able to wear a kippah on the street?”

Veronique Chemla, a French-Jewish journalist and blogger, told the Jewish Telegraphic Agency that she’s never seen a rabbi oppose the chief rabbi publicly in this manner.

“I think we’re seeing two things here: The accumulated effect of 20 years of anti-Semitic violence, mainly by Muslims, against French Jews, which is of course making many French Jews doubt their future, and growing distrust of communal leaders who are largely insulated in their daily lives from this violence,” she said. “Increasingly they’re seen as out of touch and representing the government to the Jews rather than the other way around.”

The debate was a rare public reflection of growing tension between French Jews, many of them living in rough areas with frequent anti-Semitic incidents, and communal leaders who tend to live in more upscale areas. Nowhere is this gap more noticeable than in the creeping rehabilitation of far-right ideologies among the rank-and-file of French Jewry.

Despite the public rebuke of communal leaders, support for Jewish defense groups in France is on the rise. Polls also suggest that Jewish support for the far-right National Rally party of Marine Le Pen moved from being nonexistent 20 years ago to just a few points below the national average.

Rabbi Dov Maimon, head of the Europe activity of the Jerusalem-based Jewish People Policy Institute, wrote on Facebook that Korsia’s proposition is “to love Israel but from a distance, literally alienated from it. He has fallen in love with his galut [exile].”

But Paul Levy, a regional leader in the Consistoire, the organization responsible for religious Jewish life in France that employs Korsia, said Journo’s op-ed “divides us French Jews when a rabbi’s job is to unite.”