Who counts as a Jew? A pioneering yeshiva fumbles admissions criteria, renewing debate 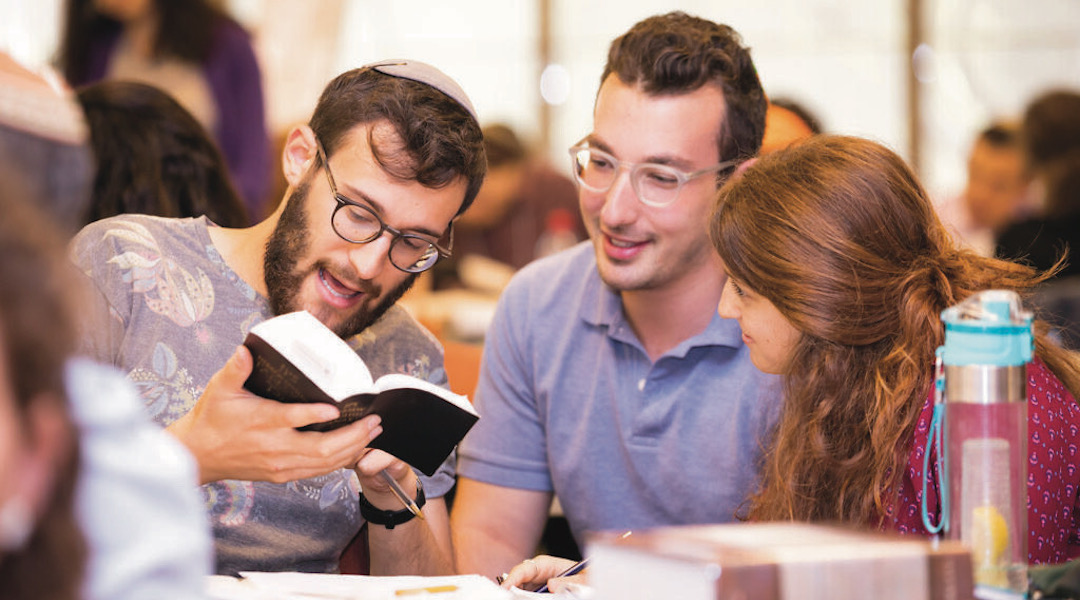 Hadar students read a piece of text together. (Courtesy of Hadar)
Advertisement

(JTA) — The modern yeshiva Hadar was founded 15 years ago to widen access to traditional Jewish learning. So it came as a surprise to many in its orbit when for a moment this week it seemed that doors to Hadar’s flagship program had been closed to many Jews.

The group had posted language on its website informing people who were interested in its Beit Midrash fellowship, a full-time study program, that those with two Jewish parents or who had undergone a formal conversion to Judaism could participate.

That standard for defining Jewishness is more stringent than any used by Jewish denomination — and, because the majority of non-Orthodox Jews in the United States marry non-Jews, a challenging one for many potential students to meet.

“Hadar doesn’t consider me Jewish,” wrote one person who shared a screenshot of the admissions standards on social media, where it circulated widely on Monday.

Within hours, Hadar had communicated with its graduates and supporters, telling them that the language had been posted in error and that its admissions standards had not changed. And within days, one of its founding rabbis had apologized over a six-year-old essay that Hadar’s critics had cited in decrying the apparent new policy.

“I am saddened to discover the extent to which my teaching and writing about Jewish lineage has had the potential to be confusing, destabilizing and to cause needless pain,” Rabbi Ethan Tucker wrote in a message sent to Hadar’s yeshiva alumni email list, adding, “I am planning on adding some clarifying language.”

Still, the episode has left many in the small but influential community with bruised feelings and bewildered about how such a significant error could have occurred. It has also underscored the degree to which even institutions that aim to be inclusive can struggle when it comes to balancing Jewish tradition and contemporary values related to identity.

Even among a group of Jews who are committed to debating the particulars of Jewish law, the screenshot of the admissions criteria for Hadar’s Beit Midrash fellowship stirred unusual fervor when it circulated this week.

Traditional Jewish law holds that anyone born to a Jewish mother is Jewish. Two liberal denominations, the Reform and Reconstructionist movements, also recognize as Jewish people whose only Jewish parent is the father and who are raised with a Jewish identity.

Hadar, founded in 2007 by Tucker and two Conservative rabbis who wanted to create an egalitarian version of traditional Orthodox yeshivas, appeared to have set a different standard.

“In addition to having a strong Jewish identity, participants’ Jewish status should be determined either by a) conversion to Judaism with circumcision (where required) and immersion in the presence of a beit din of three or b) being born to two Jewish parents,” an FAQ on Hadar’s website read.

It went on, “If you do not fit into either of these categories please contact us so we can have an honest and discrete conversation about the best path forward to participate in Hadar’s learning opportunities. We know that this is a deeply personal, sensitive, and sometimes painful subject.”

The FAQ had been online since February, Hadar officials said. But the screenshot, to which someone added red underlining the words “two Jewish parents,” ignited discussion about it only this week. 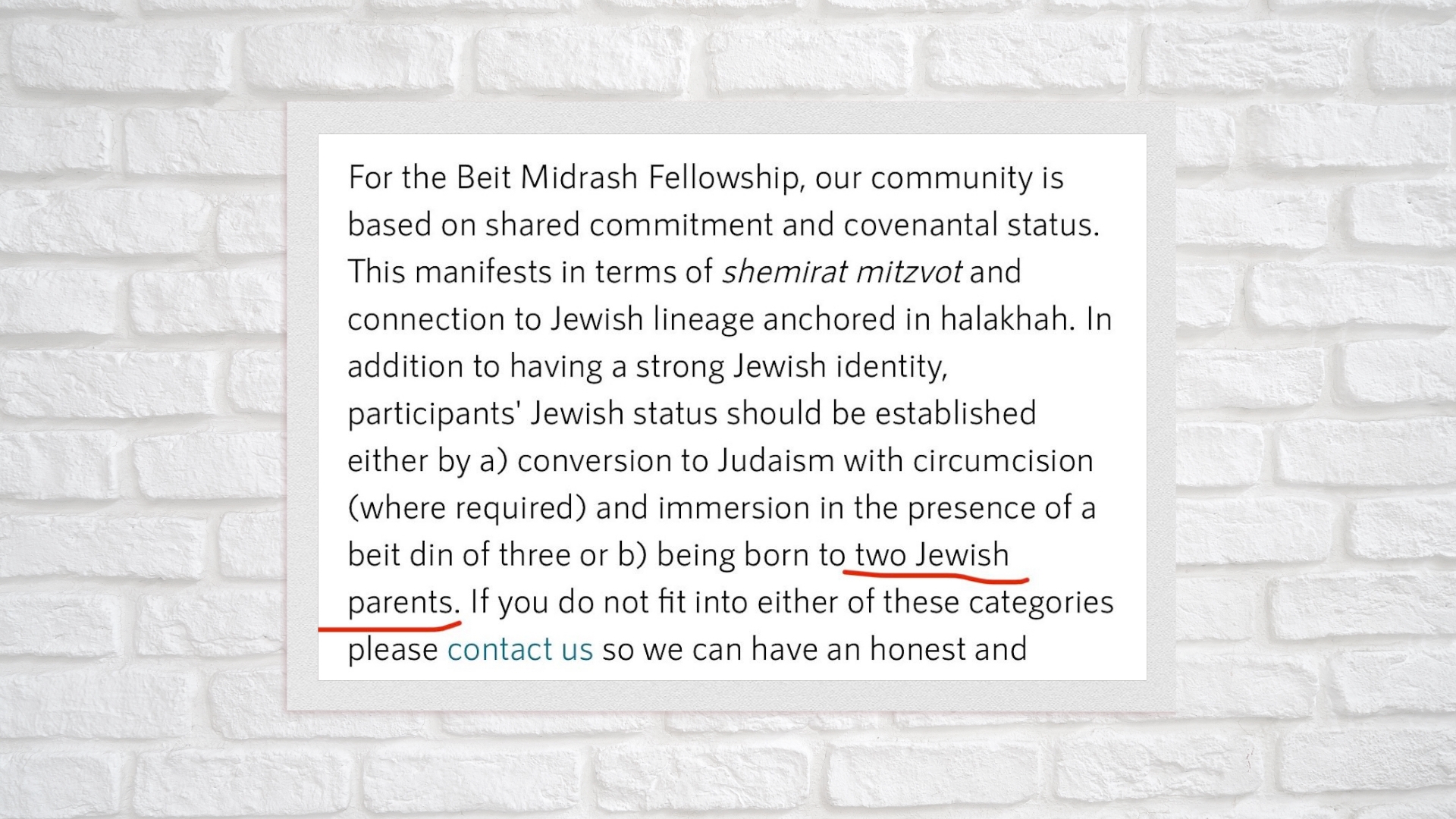 Criticism ranged from flip — “Great! Now there’s no stream of Judaism in which I fully fit in!” one person wrote — to furious at the idea that Hadar would define a Jew in ways that excluded large swaths of people.

“Such ideologies, on the one hand, betray a deep anxiety over intermarriage, and on the other, ensure the alienation of intermarried families/children of intermarried parents from Judaism and Jewishness,” tweeted Sheera Talpaz, an assistant professor of Jewish studies at Oberlin College.

By the end of the day, Hadar had removed the language in its FAQ and clarified that its longstanding policy — that participants must either have a Jewish mother or have undergone a formal conversion — remains unchanged.

“We’re really sorry for the communication and certainly for any hurt or confusion it caused and hope the new language gets us back on the footing we wanted to be on,” Tucker told the Jewish Telegraphic Agency. “We wanted to be clear about our approach to these questions and to warmly encourage and welcome people to be part of the Hadar learning community.”

Hadar officials also emphasized that only the Beit Midrash Fellowship and one other program among the many the yeshiva offers, in person in New York City and online, have any requirements related to participants’ Jewish status and observance of Jewish law, known as halacha, at all.

“It’s for this particular context where we want to and need to create a religious community based on halachic practice embedded in a larger institution that strives to share its Torah and convene people around learning without any assumption about where people are coming from,” Tucker said.

Hadar officials did not explain how the incorrect language wound up on the yeshiva’s website. What’s clear is that the criteria outlined there were in line with an intellectual argument that Tucker has been developing for more than a decade.

Tucker began teaching about the topic of matrilineal descent over a decade ago, arguing that the growing number of children of intermarriages called for a different approach to deciding which are Jewish. Parents of both sexes can confer Jewish identity, he concluded, and so, too, can it be important for Jews to have their non-Jewish parentage recognized by their Jewish communities.

Several years ago, Tucker outlined those thoughts in a public paper making the case for what he calls “modified duolineality.” Based on the work of Eliezer Hayyim Deutsch, a 19th to early 20th century Hungarian rabbi, the framework “insist[s] that only two Jewish parents confer uncomplicated Jewish status by birth,” Tucker writes. The framework, he writes, demands that the community “recognize, honor, and meet the challenges” of those with one Jewish and one non-Jewish parent.

Later in the essay, he says, “contemporary intermarriages are best described as an​ act of ‘ethnic apostasy.’”

Apostasy refers to the abandonment of religious belief, and Tucker’s term drew particular criticism this week from people who interpreted it as an indictment of marriages between Jews and non-Jews, which a recent study found make up the vast majority of unions including non-Orthodox Jews in America since 2010.

In fact, Tucker told JTA, he had sought to explore the topic precisely because so many people who identify as Jewish can feel hurt when they are not accepted as such. The essay, he said, was more of a “thought experiment” than a policy prescription. 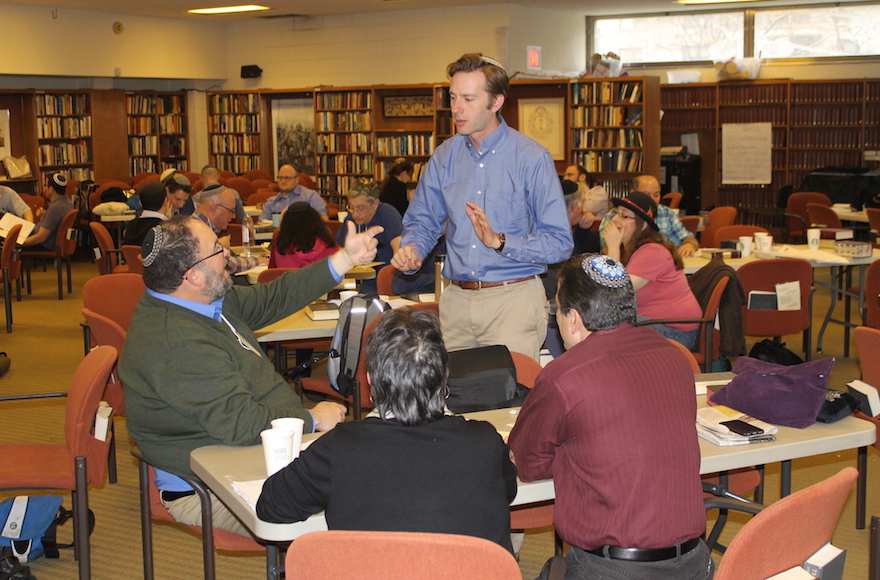 Rabbi Ethan Tucker, Hadar’s co-founder, talking with rabbis during a seminar at Hadar in Manhattan on March 1, 2017. (Ben Sales)

“This has been such a painful and stuck topic in the Jewish community for a generation and more, and it was an effort to do some creative thinking about how we might think about it in a different way,” he said.

“I was exploring in that essay, what would it look like to have a full communal reconfiguration about this in future generations? How could you imagine reconstructing a communal approach for this?” he added. “That’s not something you can or should do overnight.”

Woodward said he had found Hadar to be welcoming of his identity since he began studying there more than a decade ago. He had even used some of Tucker’s teachings about interfaith families in his own work as a Conservative rabbi, because he liked that they didn’t totally discount the non-Jewish aspect of people’s identities.

“I know how many children of interfaith relationships often feel like we walk around with a target on our backs,” Woodward said. “We feel like we are criticized by sociologists and rabbis and by people in the movements and it’s not fair and it’s not right.”

Hadar may not be adopting “modified duolineality” as an admissions standard, but some believe doing so would be in line with its egalitarian values. Rabbi Emily Cohen, who leads a Reconstructionist synagogue in New York City, argued that matrilineality — the idea that a parent who happens to be a woman has a special power to confer Jewishness onto children — conflicts with egalitarianism, or the belief that men and women are equally responsible for upholding Jewish law and values.

“Any Jewish organization that calls itself egalitarian has an obligation to either count all children born to 1 Jewish parent as Jews, or to require 2 Jewish parents for Jewish status,” she wrote.

“If you’re egal[itarian], you don’t get to keep matrilineal descent as a fun little holdover. Go more lenient or go more stringent, but either way it goes,” Cohen added. “And if you’re upset about that, maybe think about why other egal Jews might be reasonably upset to see matrilineal descent upheld.”

Hadar is far from the only Jewish institution grappling with the challenge of being inclusive while also hewing to traditional Jewish law.

“I would be wrong to suggest that it is only Hadar that has ever suggested that matrilineal interfaith Jews are less-than,” Woodward said. “I don’t think that was their intention, but as a matrilineally interfaith Jew, I have felt that from other spaces, even if it hasn’t been an explicit questioning of my status.”

Woodward says the situation of his birth — his mother is Jewish and his father is not — is “just luck.” Because of which parent happened to be Jewish, he faced no obstacles in being accepted in the Conservative movement, in which rabbis are not permitted to officiate interfaith weddings and synagogues typically bar non-Jewish family members from participating in some ritual activities.

“I feel a responsibility to pay that forward by helping patrilineal Jews who are often shamefully excluded by my movement, by the Conservative movement, to feel like they belong and to feel like they have rich spiritual lives that really matter,” he said.

The very use of firm standards to define identity has grown increasingly fraught in many corners of society, especially in the wake of the Black Lives Matter protests in 2020, Woodward noted, and that is heightening already fierce debates within Jewish communities.

“A lot of people who have felt like their identities have been marginalized by institutions of power are really willing to speak up bravely to assert the importance and the value of their identities and to use social media to do so,” he said.

These dynamics all fueled the intensity of the response this week to the policy posted on Hadar’s website, Woodward said.

“The anger on this — this is a spark that lit a tub of gasoline that’s been sitting there,” he said. “And that gasoline tank has been filled by all sorts of other institutions over the years.”

Even after the apology and removal of the language from the website, Tucker said he recognizes that the conversation isn’t over. Indeed, the same online groups that exploded over the FAQ language were dissecting the apology email on Wednesday.

“People have been grappling with questions of Jewish identity and status since the time of the Talmud and I think particularly in late modernity there’s been a major flurry of contention and schism around it,” Tucker said. “I don’t think the question is going away.” 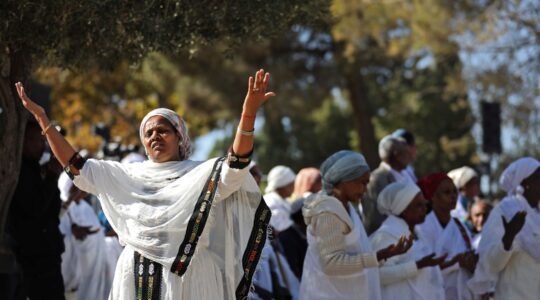 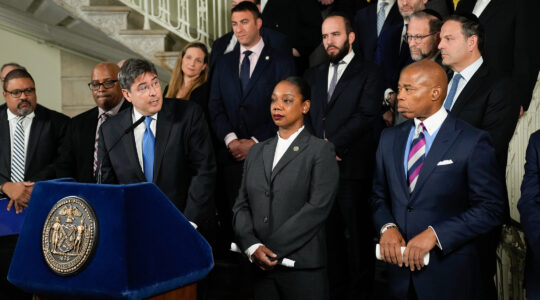 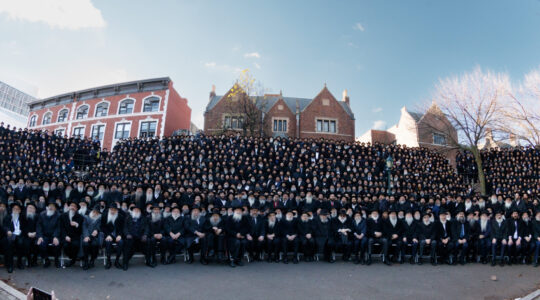