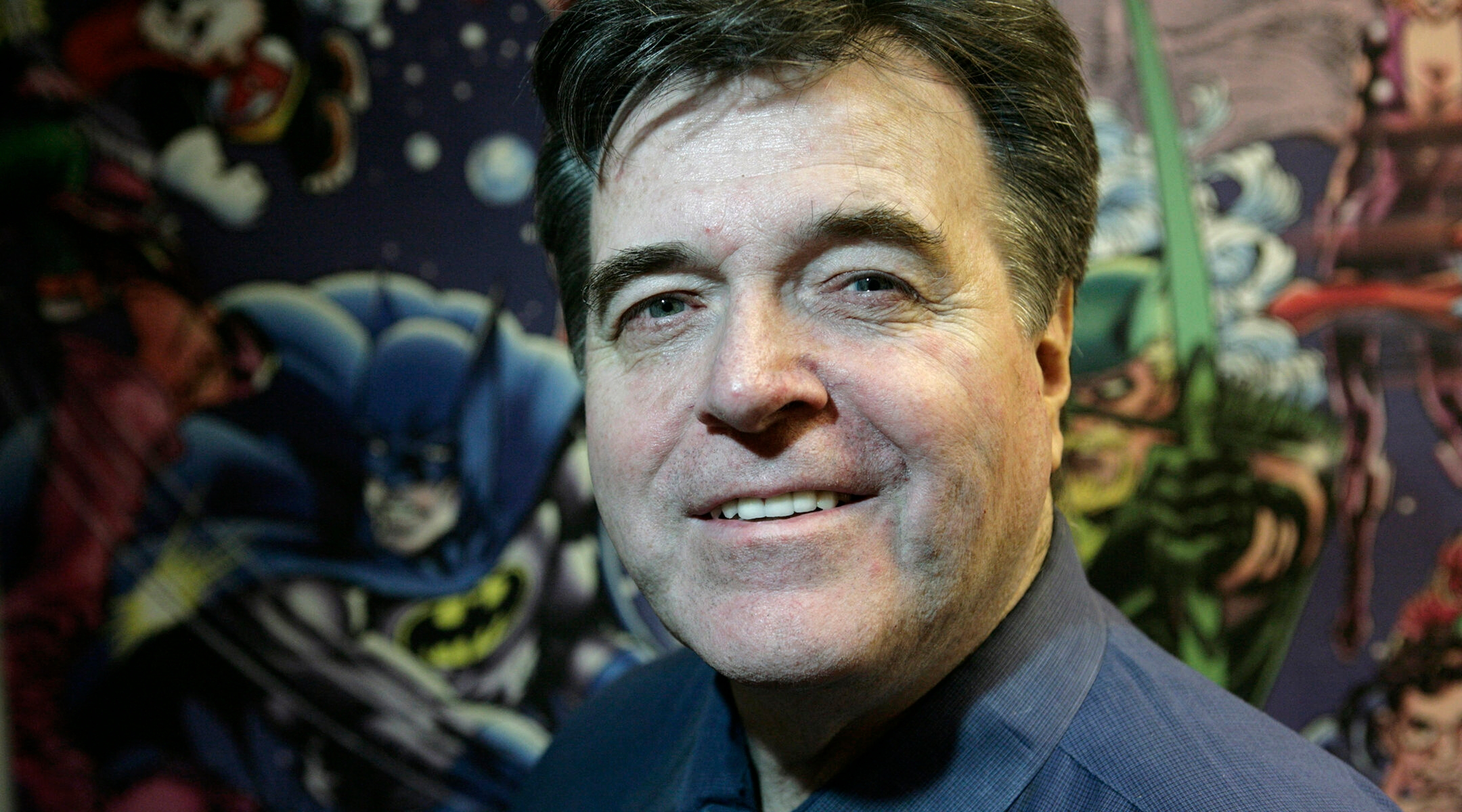 (JTA) — Comic artist Neal Adams, who passed away at age 80 in New York City on April 28, is best known for having revolutionized Batman and other iconic comic book characters for both the DC and Marvel brands. But Adams himself was also a fearless crusader: He battled comics publishers for the rights of artists and writers, rescued Superman’s Jewish creators from abject poverty and campaigned for a Holocaust survivor to regain portraits she painted in Auschwitz.

Adams, who was born in New York City in 1941 and spent much of his childhood on a U.S. military base in postwar Germany where his father was stationed, was not Jewish. But he had a strong interest in the Holocaust, both because of his childhood memories from Germany and because his mother-in-law was a Jewish refugee from Nazi-occupied Poland who helped the Polish Embassy in Morocco design counterfeit documents for other Jews fleeing from the Nazis.

In school, “they showed us some pretty harrowing stuff — newsreel footage of what the Allied troops found when they liberated the camps, severely emaciated prisoners, huge piles of dead bodies,” he later recalled. “It was very hard for a 9-year-old to take. I came home from school and wouldn’t speak to anyone for days.”

Those memories would influence his interest in Holocaust education many years later.

After graduating from the School of Industrial Art in Manhattan, Adams worked for an advertising agency where he created artwork based on copying photographs. The technique helped him develop an uncannily realistic art style which would prove revolutionary for comic books.

In 1967, Adams began drawing for DC Comics, the publisher of Batman and Superman and, a few years later, for Marvel Comics, home of Spider-Man and the X-Men. Under Adams’ pen, superheroes who previously were drawn in exaggerated, cartoonish ways, took on a new, powerfully realistic appearance. Sales of Adams-drawn comics skyrocketed.

Adams’s rendering of Batman in particular was a game-changer. He transformed the Caped Crusader — by then best-known from the campy 1960s television series — into the grim and gritty Dark Knight character that came to dominate Batman comics and more recently movies. Adams also drew groundbreaking comic stories of the superheroes Green Lantern and Green Arrow which dealt with social issues such as racism, drug abuse and pollution.

Adams’s first dive into public controversy came about by accident. During a visit to the DC production room in 1969, he chanced upon a staff member cutting up pages of original comic book art.

“I could not believe they were destroying this beautiful artwork,” Adams said later. He launched a campaign to convince DC to recognize the art as the property of the artists and return it to them after publication. After seven years of protesting, lobbying and cajoling, both DC and Marvel gave in to Adams’s demand. The sale of original art has since become an important supplementary revenue stream for traditionally low-paid comic book artists.

Jewish artists, writers and editors have played major roles in the comic book industry from its earliest days, starting with Jerry Siegel and Joe Shuster, the Jewish teenagers from Cleveland who created Superman in 1938. They sold the rights to the Man of Steel to DC (then National Periodicals) for $130 and a 10-year work contract. 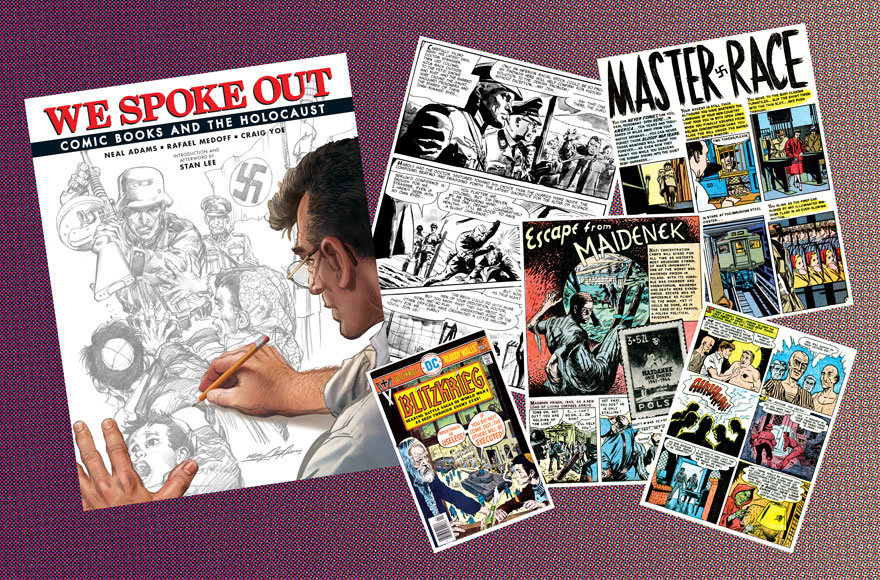 Adams coauthored the book, “We Spoke Out: Comic Books and the Holocaust,” which showed how comic book stories about the Nazi genocide played a pioneering role in Holocaust education in the 1950s and 1960s. (JTA Collage)

When Adams met them in 1971, Siegel was working as a clerk and Shuster, nearly blind, was sleeping on a cot in a relative’s apartment. Shocked to hear that Superman’s creators could not even afford tickets to see the Broadway play based on their character, Adams led a campaign to pressure DC “to just do the right thing already,” as he put it. The publicity he generated eventually convinced the publisher to give Siegel and Shuster a modest pension and health care coverage.

In 2006, Adams took up the cause of Dina Babbitt, a Czech Jewish artist seeking the return of portraits that she had been forced to paint in Auschwitz by the infamous “Angel of Death,” Dr. Josef Mengele. The Auschwitz-Birkenau museum, which acquired eight of the portraits after the war, claimed ownership.

“The fundamental principle that art belongs to the artist who created it is recognized everywhere except in totalitarian countries,” Adams and other comic book figures wrote in a petition, which echoed Adams’ earlier fight for the return of comic book art. “Mrs. Babbitt has suffered enough. We implore you to do the right thing and give her back her paintings.”

Adams drew a comic strip about Babbitt’s plight, which was published by Marvel Comics, and then later adapted into an animated short for a DVD of Holocaust-related stories created by Disney Educational Productions. Subsequently Adams, together with comics historian Craig Yoe and myself, coauthored a book, “We Spoke Out: Comic Books and the Holocaust,” which showed how comic book stories about the Nazi genocide played a pioneering role in Holocaust education in the 1950s and 1960s.

In the course of my collaboration with Adams on these projects, we had the opportunity for many conversations about comic books as a vehicle for Holocaust education, something that Adams strongly advocated. He said his Holocaust-related efforts were “some of the most meaningful work [he] ever did.” Considering the breadth and impact of Adams’s career, that was saying a lot.

Rafael Medoff is founding director of The David S. Wyman Institute for Holocaust Studies and author of more than 20 books about Jewish history and the Holocaust.