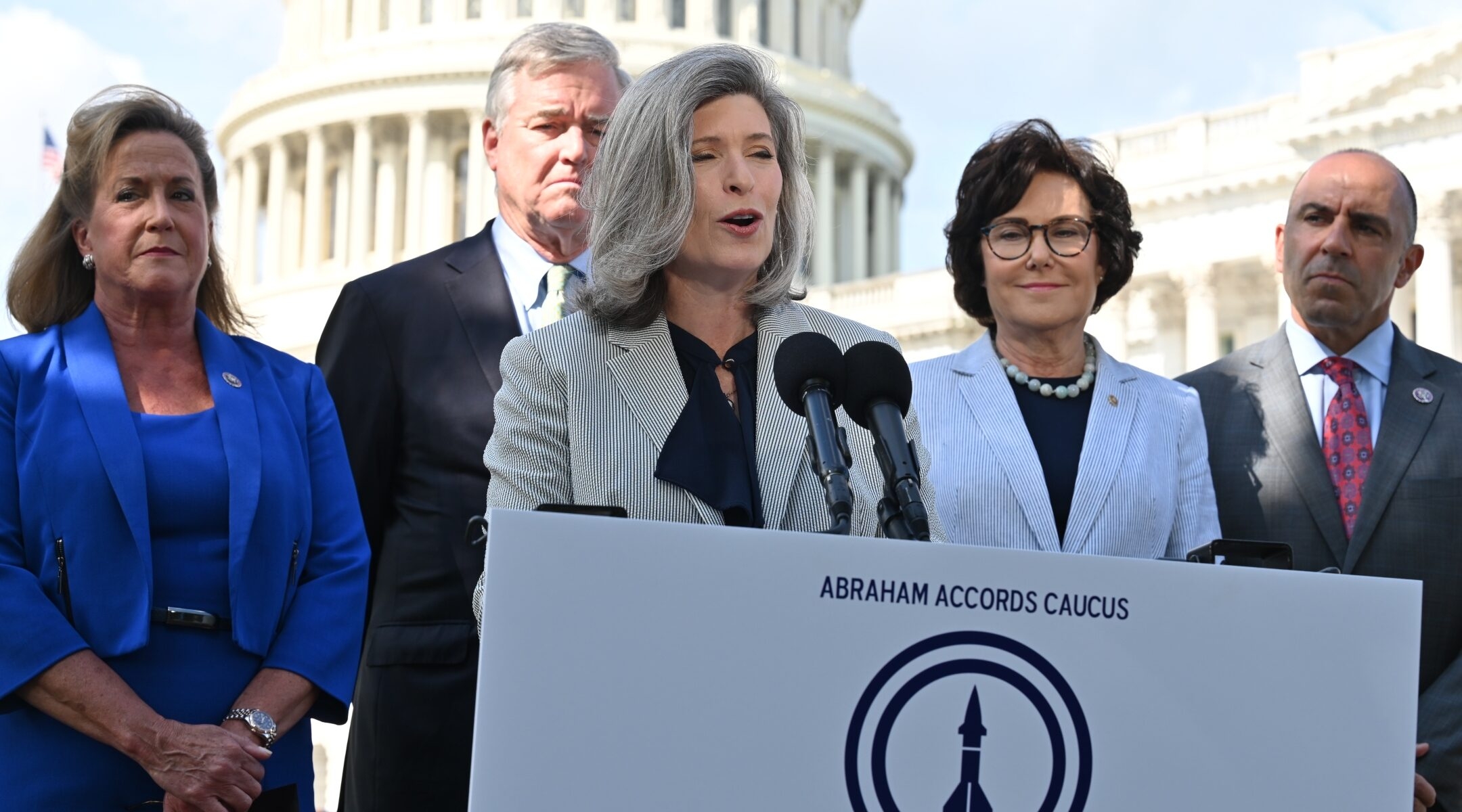 WASHINGTON (JTA) — A bipartisan slate of lawmakers launched a bill that would establish an “integrated air and missile defense capability” joining the United States, Israel and Arab countries in a bid to deter Iran.

Senate and House members of the Abraham Accords Caucus rolled out the bill, called the DEFEND Act, in a press conference Thursday outside the Capitol and described it as means of advancing the U.S.-brokered normalization agreements between Israel and four Arab countries that collectively bear that name.

“The full potential of the Abraham Accords, economic cooperation, education exchanges, trade agreements between Israel and our Middle Eastern partners, cannot be achieved without a commitment to collective security,” said Sen. Joni Ernst, an Iowa Republican who is the lead co-sponsor of the bill with Sen. Jacky Rosen, a Nevada Jewish Democrat. “America’s role in activating and networking our allies and partners in the Middle East must evolve as violent extremists, like Iran, change their tactics and onboard new systems capable of catastrophic damage against civilian targets.”

It’s not clear from the bill how formal the arrangement would be. The bill tasks the secretary of defense with establishing an “architecture” and “acquisition approach” for an “integrated air and missile defense system” to counter threats from Iran.

Israel has traditionally been wary of formal defense pacts with even its closest allies, wishing to preserve its right to act unilaterally. However, Israeli officials have in recent years signaled that less formal arrangements that preserve Israel’s agency are acceptable.

The bill also designates as participants in the arrangement the four countries signed onto the Abraham Accords — Morocco, Sudan, the United Arab Emirates and Bahrain — as well as countries that still have no relations with Israel, including Saudi Arabia and Iraq.

Saudi Arabia looks closer than ever to formalizing what has been for years a secret relationship with Israel, and reportedly are near an agreement that would allow Israeli aircraft to fly through Saudi air space. But Iraq is openly hostile to Israel.

Ernst said that the United States should coax those countries into participation. She noted that the U.S. consulate in Erbil, Iraq, came under drone attack on Wednesday, an area that has in the past come under fire from Iran and its proxies.

“We understand they are not part of the Abraham Accords,” she said of Iraq and Saudi Arabia, “but it is extremely important that we continue the discussions with them as well as wrap them into this agreement as part of the DEFEND act. We have to continue those conversations with them. We just saw the attack in Erbil yesterday.”

In a press release, Ernst named an array of Jewish and pro-Israel organizations that back the bill, but there was no institution linked to any of the Arab countries named in the bill. The lead quote was from the American Israel Public Affairs Committee.

“By directing a strategic approach to cooperative missile defense and counter-UAV coordination, this legislation strengthens the U.S.-Israel partnership as it enhances regional cooperation against common security threats,” the powerhouse pro-Israel lobby said.

Hadassah said the bill, should it become law, would “strengthen cooperative defense across strategic allies in the Middle East to protect Israel and its neighbors against growing threats from Iran and its proxies.”

Lawmakers leading the push for the bill in the U.S. House of Representatives include Rep. Brad Schneider, a Jewish Democrat from Illinois, and Rep. Cathy McMorris Rodgers, a Washington Republican.

Ernst expressed confidence at the outset that the bill would sail through Congress, given its bipartisan backing in both chambers, but it may hit some roadblocks. Progressive Democrats have in recent years grown increasingly wary of delivering arms to the Middle East, to Israel and also to authoritarian Arab countries like Saudi Arabia.

The bill could also be seen as an irritant to Biden administration endeavors to reenter the 2015 Iran nuclear deal.

Lawmakers at Thursday’s press conference suggested that deterring Iran was made urgent by the apparent failure those talks, which are currently stalled in Vienna over Iran’s insistence that Biden removes Iran’s Islamic Revolutionary Guards Corps from the list of designated terrorist groups. The Trump administration quit the deal, known as the Joint Comprehensive Plan of Action, in 2018, and Biden wants back in because he sees the deal as the best means of keeping Iran from obtaining a nuclear weapon.

“As we realize as the administration works to revive the JCPOA from the dead, Iran continues to not only bolster its breakout time to build a nuclear weapon, but it is also doubling down on its ballistic missile program as well as its regional troublemaking in the Middle East,” said Rep. Jimmy Panetta, a California Democrat.