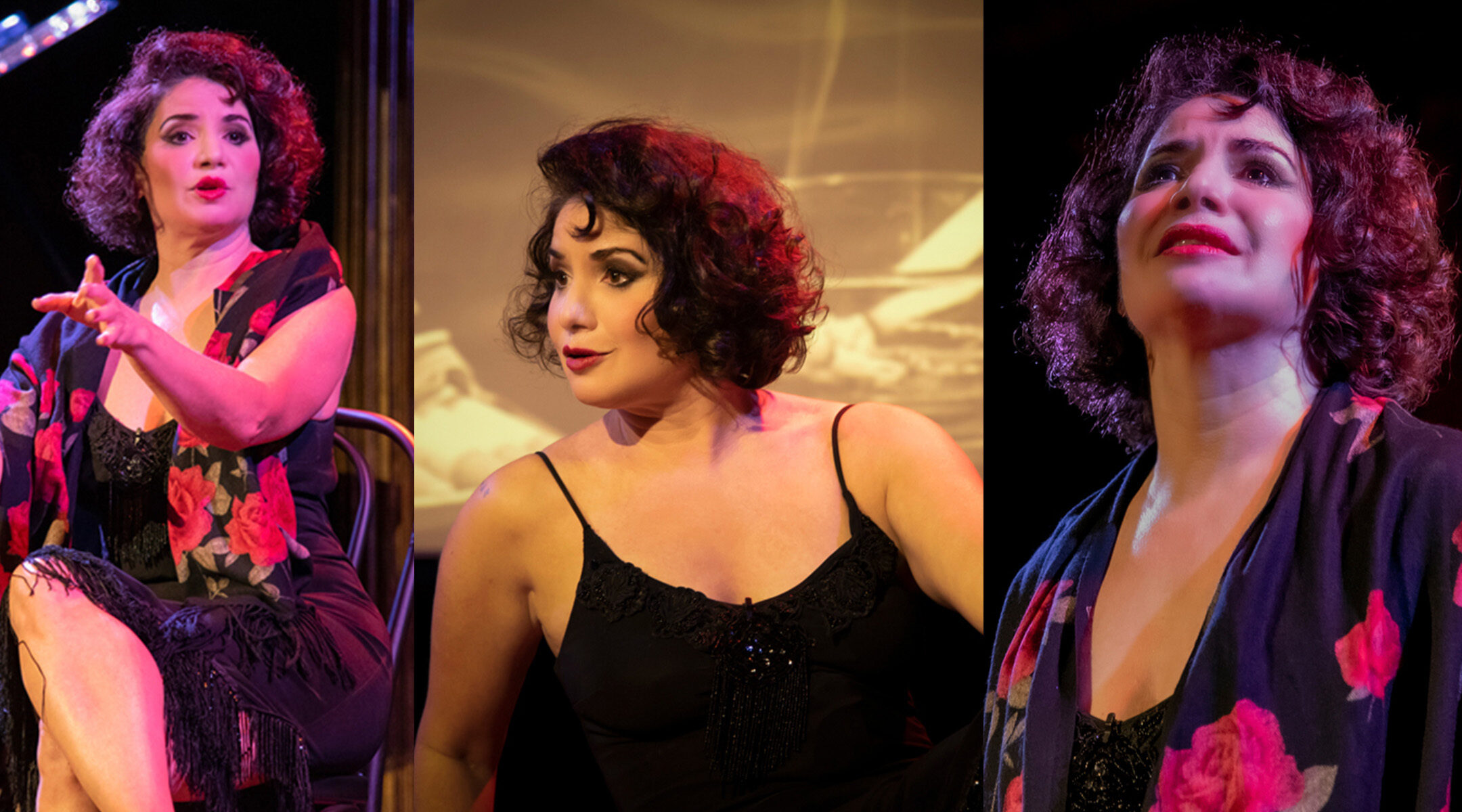 (New York Jewish Week) — Hundreds of tourists and midtown office workers cross the intersection of 39th Street and Broadway every day — and most probably don’t realize they are passing a crucial site of Jewish, LGBTQ and theater history.

A star of silent film, in 1923 she produced and starred in the silent film “Salome,” a loose retelling of the execution of John the Baptist at the request of King Herod’s teenage daughter, based on the play of the same name by Oscar Wilde.

“Salome” is considered her most influential work and the first American art film. It was also her downfall.

While public disapproval of the risqué “Salome” worked to erase Nazimova’s name and legacy, hints of her unparalleled contribution to film and theater still survive to this day. Nazimova, who died in 1945 at age 66, inspired some of the greats of American theater such as Tennessee Williams and Eugene O’Neill. And, more recently, she became the subject of playwright and performer Romy Nordlinger’s one-woman play, “Garden of Alla,” in which Nordlinger, as Nazimova, shares her life story.

Nordlinger, also a Jewish actress of Crimean descent, stumbled on Nazimova’s story by accident and realized this was a story she couldn’t not tell.

“Nazimova’s story empowers people, particularly younger people, who might be thinking of coming out or declaring something about themselves,” Nordlinger told the New York Jewish Week. “Whether it be coming out as LGBTQ or Jewish or just feeling proud of who they are: Nazimova did it back then, on her own, in an oppressive time for women and the LGBTQ community. It really blows your mind.”

Born in 1879 into a Jewish family in Tsarist Crimea, Nazimova survived an abusive childhood at her father’s hands and pursued a career as an actress. She was a student of Constantine Stanislavski — the father of method acting — though she eventually fled Russia to escape Jewish persecution. Nazimova made her American debut in the Yiddish theater of the Lower East Side in 1905. She soon became a Broadway star before migrating to Hollywood to work in the film industry where she became, for a time, the highest paid actor in the world.

In her home on Sunset Boulevard — known far and wide as the “Garden of Alla” —  Nazimova hosted one of the most storied and longest-running parties of the Roaring ’20s. Her raunchy salon attracted the most famous actors, artists and influencers of the time, including writers F. Scott Fitzgerald and Dorothy Parker. She also introduced a women’s “sewing circle” — 1920’s code for a lesbian gathering — that was an essential space for women and LGBTQ people at a time when they had to exist under the radar.

“Salome” — which has been admired and heavily borrowed from by contemporary stars such as Lady Gaga — was just a little too salacious for its time. Her career and personal life devolved shortly afterwards. Between financial losses from the film and being outed by her beard, actor Charles Bryant, Nazimova could soon only afford to rent a room in her once glamorous Garden.

As Nordlinger, as Nazimova, says in the play: “I have succeeded miserably, I have failed triumphantly.”

The New York Jewish Week caught up with Nordlinger to discuss Nazimova’s creative legacy, her Jewish identity and why it’s important to tell her story today.

New York Jewish Week: How did you discover this story?

Romy Nordlinger: I first learned about Nazimova through a friend, Mari Henry, the founder of the Society for Preservation of Theatrical History. Mary is passionate about showcasing the work and life stories of forgotten female artists and has combined her research into a presentation called “Stage Struck.” She reached out to me to write a monologue for this project. She brought up a number of actresses for me to research but I was having trouble connecting with them emotionally. I wasn’t feeling the spark of inspiration and I just couldn’t imagine myself playing any one of them.

Then Henry introduced me to Nazimova. I started doing a little research and I was intoxicated by her story. If we don’t tell our stories, these stories are lost. I knew I had to tell hers.

Why did you connect with Nazimova’s story?

Her commitment to art was uncompromising. She challenged herself to rise above adversity like nothing I’ve ever seen. She reminded me of my own inner voice that I have tried to cultivate; the voice that guides me to believe in myself beyond what other people think. She didn’t have to create “Salome,” which broke her financially, or host the greatest party of the 1920s and beyond. Even when she became a guest inside her own mansion she thrived on her internal strength.

How did Nazimova’s Judaism influence her life and work?

Growing up in Tsarist Crimea, Nazimova experienced persecution as a child for being Jewish. Eventually, she had to flee because of her faith and she initially starred in Yiddish theater in America. However, once she was established in Hollywood, Nazimoa never particularly proclaimed her Jewish identity, nor her bisexuality. It was just a tacit part of her.

Her Jewish identity was, however, part of what made her feel like an “other,” an outsider. I think this was a large part of what drove her to express herself and rise above the diminishment she experienced earlier in life.

How did writing this play, and embodying Nazimova’s voice, affect your own Jewish identity?

There are a lot of parallels between Nazimova’s and my own Jewish expression. I’ve never been particularly “out” about it in my personal life. Professionally, this is the first time I’ve taken on a role where Judaism is important to the character’s identity.

I feel like Nazimova has helped me to investigate that part of myself and fully inherit who I am. I see both of us grappling with the different levels of identity that Jews are often navigating: the pride and the otherness. That discomfort I felt growing up Jewish in the South, in Richmond, Virginia, or being dismissed in my field. The identification I have with the history of the Jewish people. It’s a huge part of me. I’m so glad I finally get to identify myself, to “come out,” so to speak.

Why is it important to tell Nazimova’s story now?

I actually had to ask that of Nazimova herself. Why would she be telling her story now? And the answer is in the title of the show: She’s here to tell people about the Garden of Alla, her home which was diminished and then destroyed, before it was entirely forgotten.

And that’s why I need to tell Nazimova’s story now — to rediscover Nazimova and people like her: Jewish women, LGBTQ people, women in Hollywood and the immigrant story. To preserve their work and their spaces. For Nazimova, that was her namesake theater on 39th Street [in New York] and the Garden of Alla, which is now a nondescript strip mall in West Hollywood.

“The Garden of Alla: The Alla Nazimova Story,” written and performed by Romy Nordlinger, is showing at the Theaterlab (357 West 36th Street), June 17 through 25, 2022. Visit the Theaterlab website for more information.