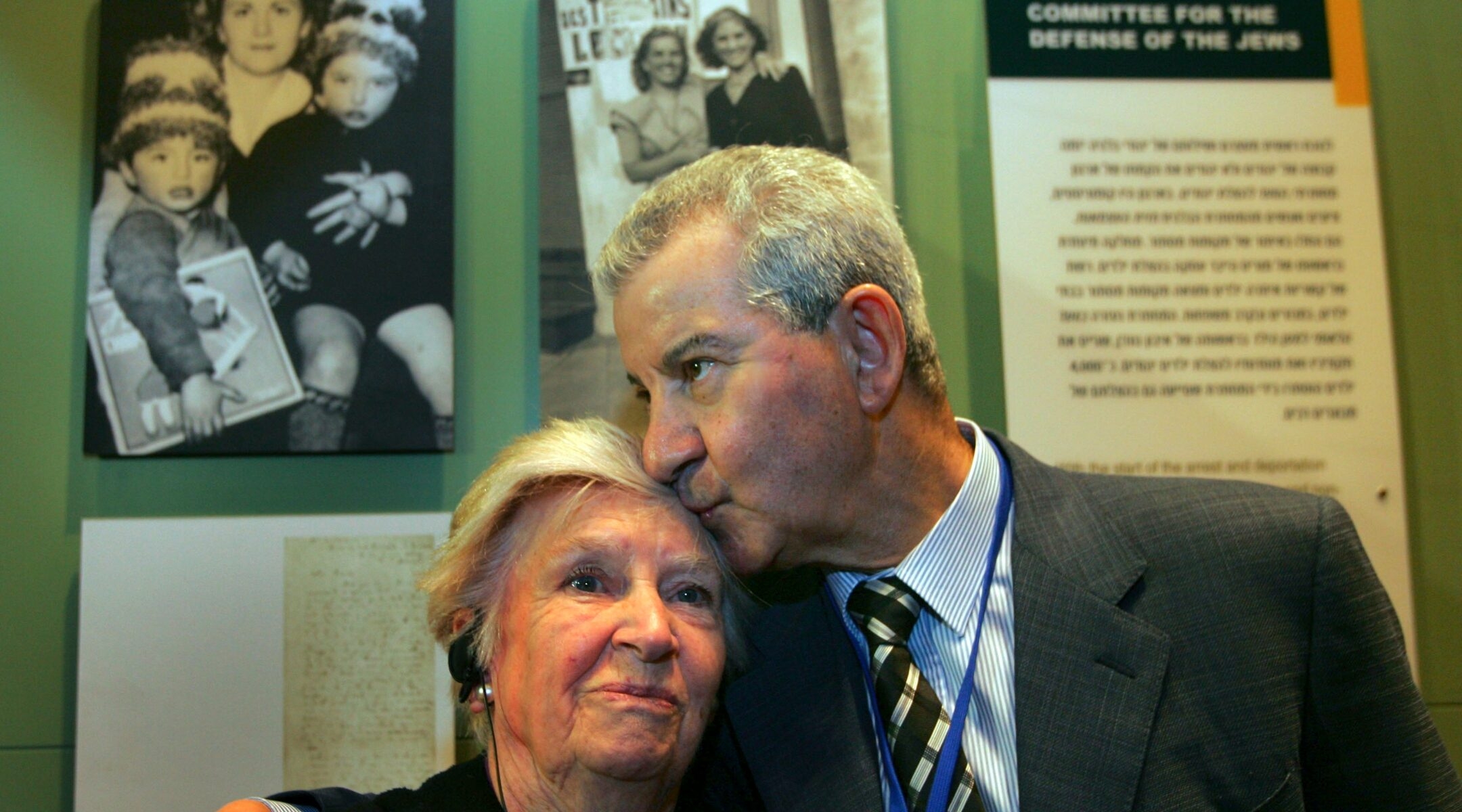 Andrée Geulen-Herscovici, a Belgian woman who rescued some 300 Jewish children from the Nazis during the Holocaust, is embraced by Henri Lederhandler, one of the children she rescued, in front of the exhibit on her efforts in the museum of the Yad Vashem Holocaust Memorial in Jerusalem, April 18, 2007. (David Silverman/Getty Images)
Advertisement

(JTA) — The hardest part, Andrée Geulen said, was not hiding from the Nazis, or even confronting them; it was separating Jewish children from their parents.

Geulen, a Belgian woman who rescued hundreds of Jewish children as part of the Belgian underground, died in Brussels on May 31 at 100. Yad Vashem, Israel’s Holocaust memorial, recognized her as a Righteous Among the Nations in 1989.

In later years she said her most agonizing memories were wrenching children, some as young as five days, from their parents.

“Taking children that way, from a mother who has just given birth, is terrible,” The Washington Post quoted Geulen as telling Anne Griffin, a historian of the Belgian resistance. “Getting onto a train with Jewish children, knowing that the Germans could also get on, that didn’t frighten me. But to tear a child away from his mother, and not tell her where we were taking him, and to have her cry and cry, ‘Tell me, at least, only tell me where you’re going to take him!'”

Geulen, a striking blonde, recalled to Yad Vashem how she would casually walk her charges through Nazi roadblocks.

“Often when we went to see the Jewish families we would find ourselves in the middle of a roundup: blocked roads, soldiers at all corners and trucks for the transport of the people caught in the hunt,” she said in oral testimony to the memorial. “Fortunately we almost always managed to save some children… we would pass the roadblocks with one child in a pram, holding the hands of two others. The soldiers would shy away from a mother with many children.”

Geulen was a teacher at a girls’ school, in her late teens herself when she noticed some of her students come to school one day clutching their notebooks tightly to their chests; they were trying to conceal newly bestowed yellow stars identifying them as Jews. She had all her students wear aprons so there would be no distinctions within the school walls.

A few weeks later, some children started not showing up at all. She learned they had been deported. She joined the Committee for the Defense of Jews and worked with another 11 women who together saved the lives of 3,000 Jewish children. She was the last survivor of the group.

Geulen was teaching at a school concealing Jewish children in 1943 when the German occupiers, acting on a tip, raided. They deported and murdered 12 children and the headmistress, Odile Ovart, and her husband (whom Yad Vashem also named Righteous Among the Nations).

She was released, and immediately set about warning the school’s other Jewish children not to go back.

Geulen’s work did not end with the war. The committee kept books tracking where the children were hidden, and she used a complex code, in case the notebooks fell into the wrong hands, to track down the children, reunite them with their parents when she could and guide them in other cases through the suffering of knowing they would never again see their parents.

She married Charles Herscovici, a Jewish man whose parents perished in the Holocaust. He died in 2005. She is survived by two daughters, five grandchildren and seven great-grandchildren.

She is also survived by a dwindling number of the children she rescued. Even decades after the horrors she saved them from, she would not spare them her love.

“You placed your little hand in mine (the other hand held on to the large suitcase with all the treasures prepared with tears by your mothers), and we left on our journey,” she said at a Yad Vashem reunion with the children in 1998. “I loved you then so much; I still love you as much today.”