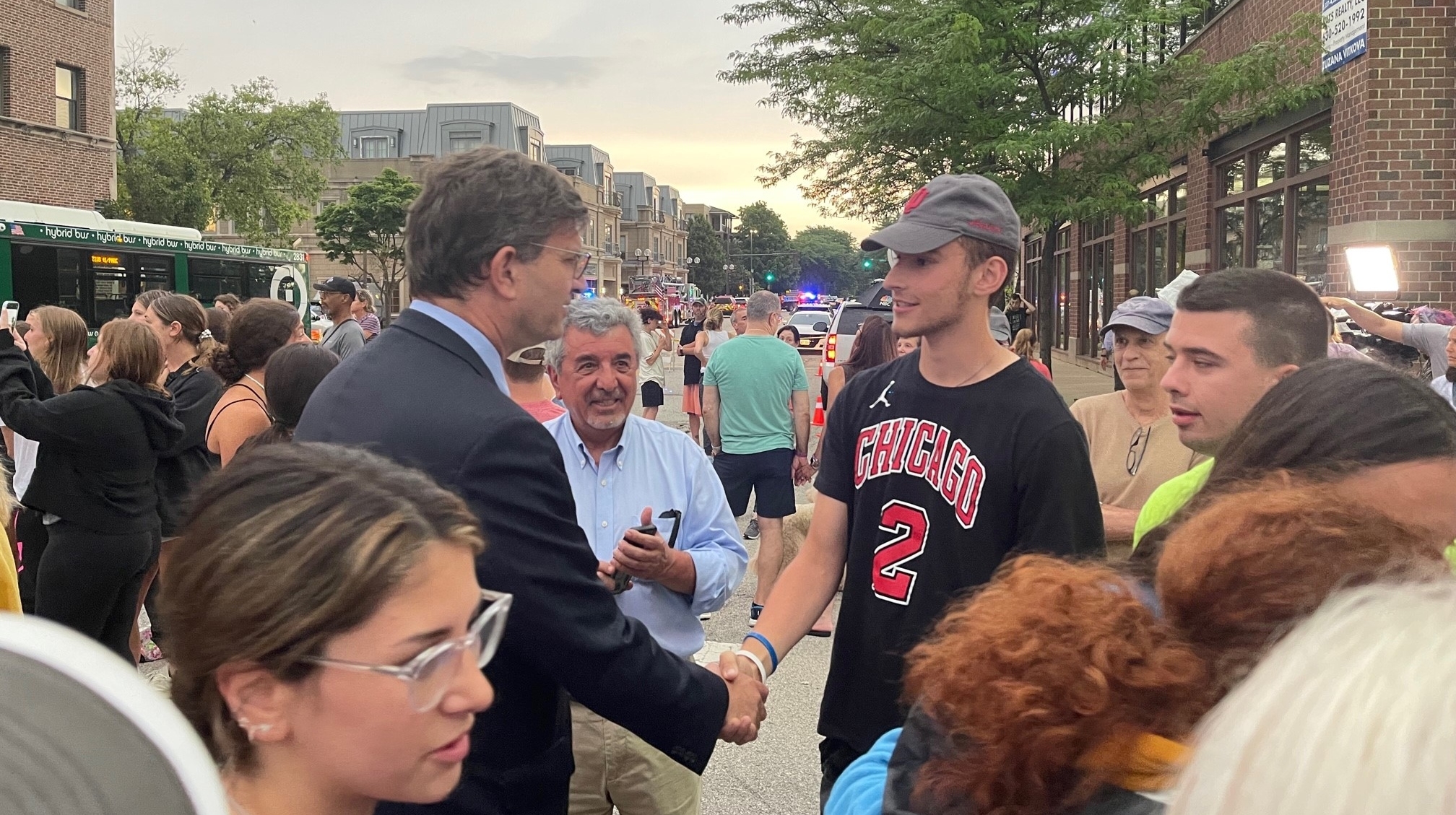 The Jewish Democratic congressman has been working them since 2011, when he started running for his first term in Illinois’ 10th district. He packs five parades in on the day, and he can rattle off the established order, their start times staggered so there are no conflicts.

“Vernon Hills, Highland Park, Deerfield, Glencoe, and Northbrook,” he said. “I’ll walk 12 to 15 miles by the end of the day.”

On Monday, he started as always with Vernon Hills and he noticed something different. There was a post-pandemic buzz.

“There was a special energy this year because people felt it was so good to be back together, back together as a community,” Schneider said. “People are coming out, they’re showing me pictures from 10 years ago at the parade and we’re taking another picture now.”

He was enjoying the vibe just after 10 a.m. when he got to the next stop on his itinerary, Highland Park. He was at the north end of the parade route on Central Street, and his staffers were at the south end, so he called them to work out where to meet.

“I was talking to my team, my team leader,” he said, referring to a campaign organizer. “And she said there’s shots and everybody is running away.”

In a moment, a fourth of July idyll had become a nightmare. A gunman in the heavily Jewish town — where Schneider himself lives — had opened fire from a rooftop, killing seven people and wounding dozens. Schneider, a businessman, was before entering Congress a lay leader in the American Jewish Committee and the American Israel Public Affairs Committee, and he has been a leader in Congress in advancing pro-Israel legislation.

Schneider offered his phone to children trying to call their parents. He helped direct traffic away from the carnage. He told his staffers to meet him at his house to shelter in place.

He spent the next two days checking in with constituents and local officials to see what he could do to help.

By the time he spoke to the Jewish Telegraphic Agency on Wednesday, he was coming out of a haze. In a stream of consciousness, he described the parade he had longed for.

“Most people are smiling, some will agree with me, some don’t, but we have nice conversations, a lot of people wear these … headbands with the stars and stripes or red and white tassels and I’ll joke and I’ll say, ‘You’ve grown patriotic antennae’ and things like that,” he said.

“It’s the parents and grandparents sitting in the chairs,” he went on. “If they planned ahead, they’re either under a tree or they brought a little tent for some shade. And the kids are out on the street cheering and smiling and obviously a lot of different people in the parade bring candy and swag for the kids and they love it and it’s just It’s the happiest of times.”

And then he described the July 4th that was. 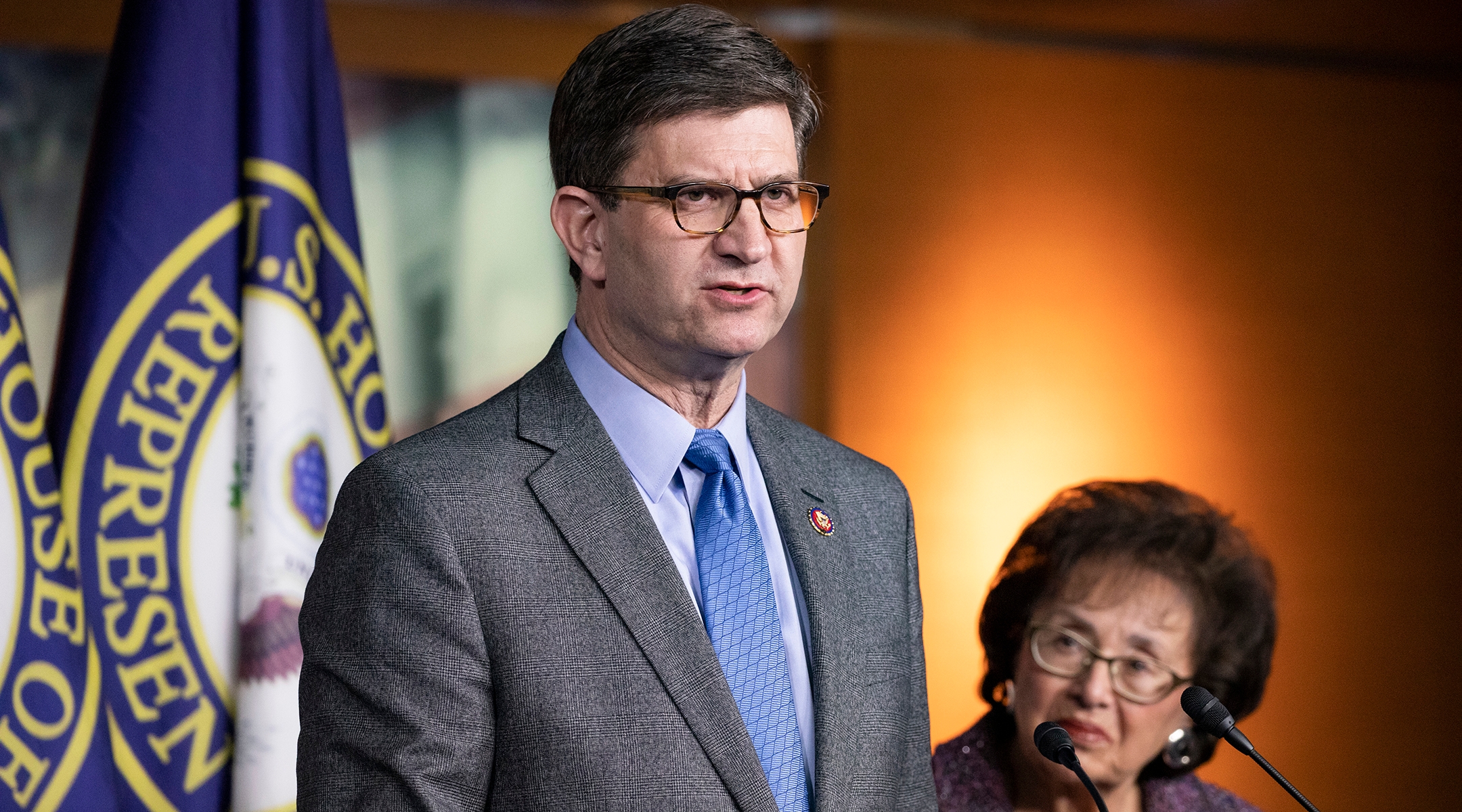 Representative Brad Schneider speaks about his experiences during a trip to Israel and Auschwitz-Birkenau as part of a bipartisan delegation from the House of Representatives. (Samuel Corum/Getty Images)

“All of that was shattered in an instant on Monday when a guy with a military assault weapon climbed a ladder, sat on a rooftop, and fired off what’s being reported as many as 70 shots in a matter of seconds,” he said.

One of Schneider’s first calls was to the local sheriff. “He told me that he had seen two individuals who were dead at the scene and that there were other people being taken to the hospital,” he said. “We now know it was seven people murdered. … My heart is breaking for these families.”

A number were Jewish, he noted, at least three of the seven. Schneider started reciting their names, but stopped, perhaps because it seemed beside the point. The victims who most gripped him were the parents of a 2-year-old toddler, found wandering amid the carnage.

“I was on CNN and I started to tell the story about Aiden McCarthy, the 2-year-old who’s now an orphan, and I nearly lost it on camera and broke down afterward,” he said.

And then he composed himself, and, asked to explain what happens next, he recited the menu of reforms Democrats have sought for decades.

“These are weapons of war intended to kill as many people as efficiently and as quickly as possible,” he said. “They have no business in our communities or on our streets. We also have to address the mental health issues, the societal determinants of health. There are so many things that we need to address. But getting these assault weapons off the street should be first order.”

But what was preoccupying Schneider was the community, his community, and what would happen to it in the wake of a shattered July 4.

“The more we learn about the story, the more connections we will see to every aspect of who we are as a community,” he said.