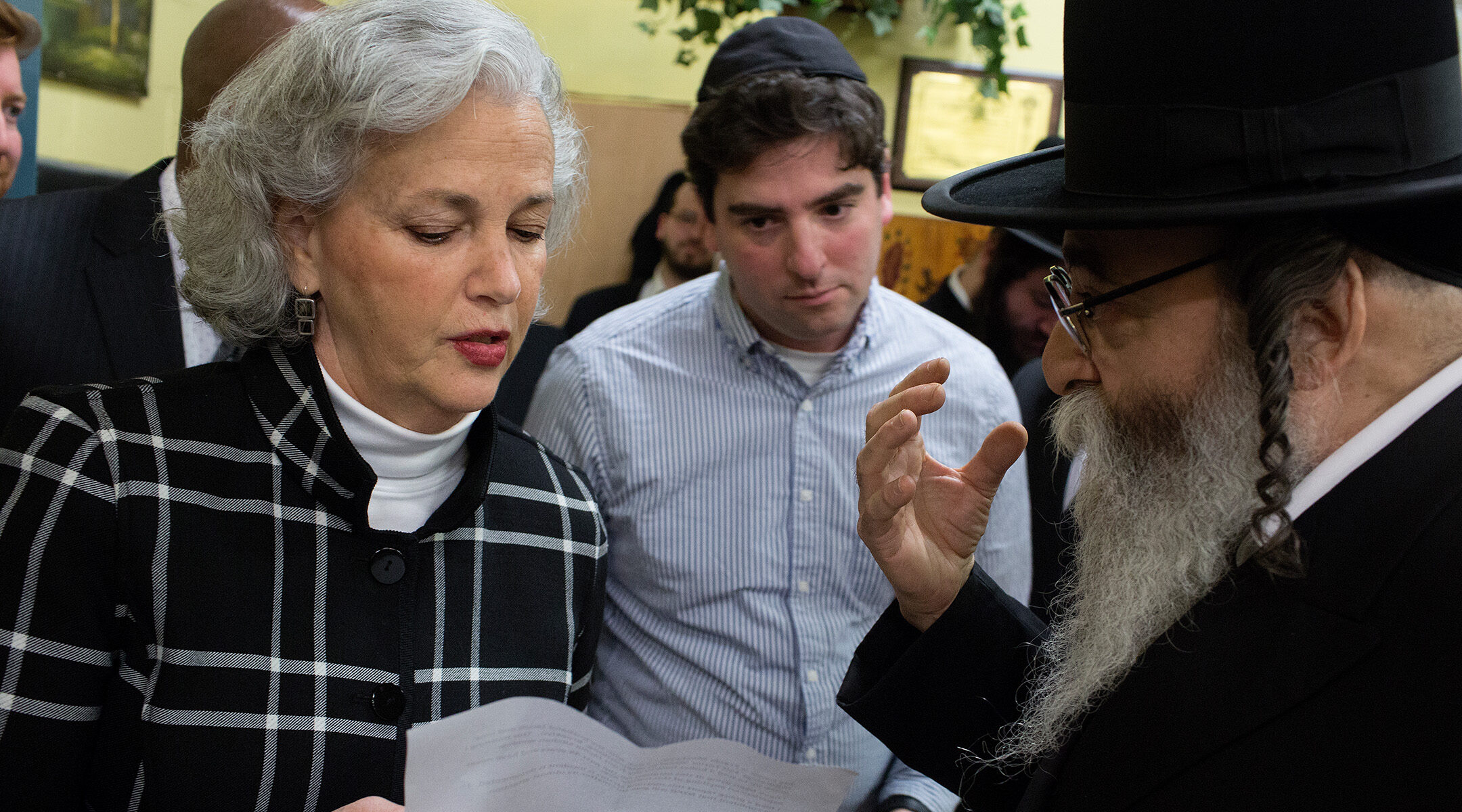 Deborah Lauter, in her role as director of the New York City Office for the Prevention of Hate Crimes, attends a press conference in Williamsburg to denounce a hate crime attack in Jersey City, Dec. 12, 2019. (Photo by Andrew Lichtenstein/Corbis via Getty Images)
Advertisement

Niederman is the executive director of the United Jewish Organizations of Williamsburg, an organization that advocates for Satmar Hasidic community in Brooklyn, which began reporting a wave of street attacks on its distinctly dressed members in 2019.

The kids at the school frequently pass religious Jews on the streets, and only see “black coats and black hats and nobody talks to each other,” Lauter said. “They’re sort of scared by them.”

“To have the rabbi sit down with them, and explain who they are, it was really powerful,” she continued. “The OPHC helped train leaders so we can make these cultural shifts and establish relationships with, quote unquote, ‘the Other’.”

Three years after her appointment as the head of the brand-new office, Lauter stepped down in March to take a new job as executive director of the Olga Lengyel Instute for Holocaust Studies and Human Rights, or TOLI, a New York-based nonprofit that promotes Holocaust education. In an interview this week she looked back on what the hate crimes office has accomplished — including getting Jewish, Muslim, LGBTQ, Black, Hispanic and Asian communities to “sit at the table together” to raise awareness of resources available for them — and ruminated on the work still to be done.

“My biggest frustration was the bureaucracy,” Lauter told the New York Jewish Week. “I was warned about it, but experiencing it was pretty frustrating. Even when we would get grants approved, getting the money into the hands of the organizations that needed them was horrendously difficult.”

Niederman told the New York Jewish Week that when Lauter first started on the job in 2019, it was during “a horrifying spike of antisemitic crimes,” citing Williamsburg as the “epicenter” of the attacks.

“We were in constant touch with Deborah Lauter on how to proactively preempt hate before it takes root and rears its ugly head,” Niederman said. “She’s certainly the right person to help further promote more education about the Holocaust, so that we understand the dangerous results that hate leads to, and the urgency to promote tolerance and understanding between communities and people.”

We are pleased to share that @DeborahLauter, leading civil and human rights activist, has been named Executive Director of TOLI.

She brings distinguished career in nonprofit and government service with @stophatenyc and @ADL.

Lauter told the New York Jewish Week that her plan was to retire when she resigned from the OPHC, which had been created in 2019 under Mayor Bill de Blasio in response to a rise of antisemitism and later addressed a rash of anti-Asian hate crimes during the pandemic.

“I felt really good about what I had created, but my first grandchild was born,” Lauter said. “I was also one of those people that was not thrilled about coming back to city government, full-time in an office [post-pandemic]. My intention really was to retire.”

The city has not yet named Lauter’s successor at OPHC; the office’s deputy executive director, Hassan Naveed, is serving in the interim.

The OPHC did not respond to requests for comment.

Lauter came to the OPHC job after a Jewish communal service career that included serving as the Anti-Defamation League’s national civil rights director. A New York Police Department report from a few months prior to her appointment showed a 64 percent rise in hate crimes in the first months of 2019 over the same period the year before. Attacks on Jews in particular nearly doubled, to 110 from 58.

In February 2022, the New York Police Department released data showing that antisemitic hate crimes were up 400% compared to the previous year.

Rabbi Bob Kaplan, executive director for the Center of Community Leadership at the Jewish Community Relations Council of New York, said that Lauter was “a tremendous partner” during her years at OPHC’s helm.

“She wasn’t just a sideliner,” Kaplan said. “She helped us to think through on meeting challenges. There is a rise in antisemitism, but she did set the table well, and created this partnership which allowed us to do new things.”

Kaplan added that the broad, multi-faith coalition that Lauter set up with de Blasio, called Partners Against The Hate (PATH), was “cutting edge.”

“It allowed us to partner with these other groups in a thoughtful, strategic fashion,” Kaplan said. “Often we work on hate crimes in silos. We see hate as something within our community, but we have to recognize it is a danger to the entire fabric of our society, whether it’s antisemitism, Asian hate crimes, LGBTQ hate crimes — any form is incredibly dangerous and needs to be met in a united fashion.”

Kaplan said that JCRC-NY is still working with the OPHC and plans on continuing as a PATH partner this year. “We are following up on Deborah’s legacy,” Kaplan said. “We are still in consistent dialogue with them.”

Lauter said she spent most of the first few months with the OHCP directly addressing hate crimes toward the Orthodox community in Brooklyn. “I spent a lot of my first half of the year establishing relationships with that community, hearing their concerns and going to a lot of meetings,” Lauter said.

“A lot of the work that we did with the Asian community was working in multiple languages and showing the importance of reporting these things and providing resources to respond,” she said.

We've seen an alarming rise in hate crimes across our country. It’s not enough to condemn them and hold perpetrators responsible — we have to take on the root causes of hate and how it spreads. That’s the mission of Deborah Lauter and our Office for the Prevention of Hate Crimes. pic.twitter.com/m406E3MaKv

Lauter added that while she feels proud to have created the office and brought together the diverse coalition of communities to combat hate, she said these organizations now need more support. “It’s distressing,” Lauter said. “A lot of emphasis needs to be placed on community organizations to make systematic changes within their communities. We need to be having more conversations about what is effective and what is not.”

As for her work with TOLI, which she began Aug. 1, Lauter said the organization’s education programs “have flown under the radar in the Jewish community” and she’s impressed with its ability to foster Holocaust education.

“I really think using the Holocaust as a lens to talk about basic principles that keep democracy sound is what this country and our students can really benefit from,” Lauter said. “That’s why I’m here.”

In New York this year, lawmakers introduced a Jewish Heritage Day bill for classrooms, and another bill that requires more stringent Holocaust education in curriculum statewide.

Lauter said that while she supports these bills because they bring awareness to the Holocaust, there is also the need for the kind of teacher training in Holocaust studies that TOLI provides. “We’re providing the real meat on how to do this right,” she said.

She added that throughout all of her work, her ethos was to remember that “‘Never Again’ was the 11th commandment.”

“What does ‘Never Again’ mean?” Lauter asked. “It’s not just honoring the survivors by teaching the facts about the Holocaust, but again, by giving teachers the skills to make it relevant for students today.”