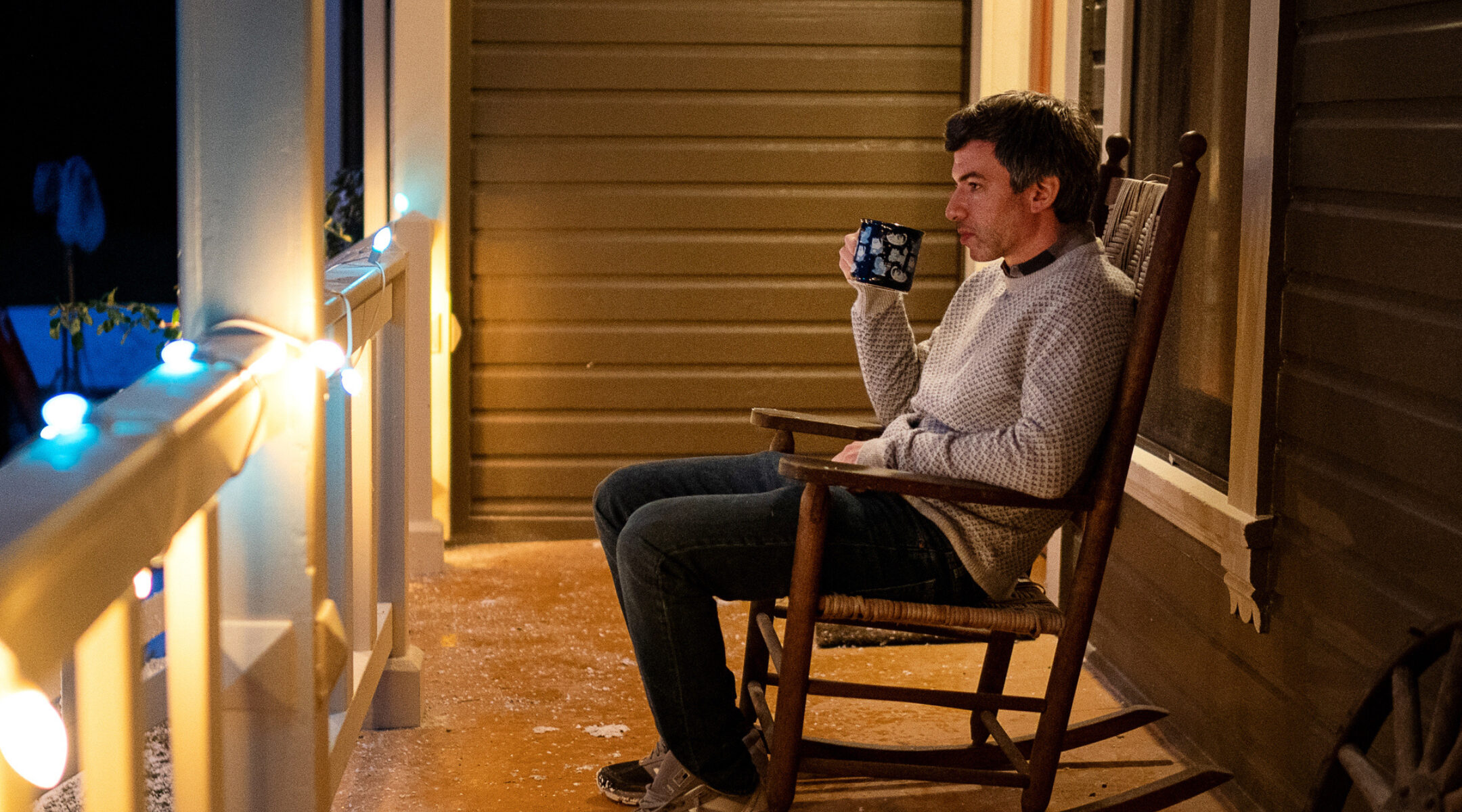 Nathan Fielder sits on the porch as he waits for Miriam to arrive. (Photograph courtesy of HBO)
Advertisement

(JTA) — Nathan Fielder has always been open about his Jewish identity in his comedy. But in the latest episode of his hit HBO show, “The Rehearsal,” he has to fight for it.

“The Rehearsal” has drawn massive audiences, critical acclaim and, for many, a dose of discomfort because of the way Fielder seems to revel in awkward silences as he plunges people into detailed replicas of their own lives as they prepare for major life events or difficult conversations they need to have.

For most of the season, Fielder has been staging a rehearsal of parenting for Angela, a 44-year-old unmarried woman who isn’t sure whether she wants to have a family. Angela is soft-spoken and loves dancing by herself when only the cameras are watching. She’s also a devoted Christian who explains to Nathan that Halloween is a satanic ritual.

As part of her rehearsal, Angela is raising a child from ages 0 to 18, condensed into just a few months. Her son, whom she names “Adam” in an obvious biblical reference, is played by dozens of child actors who swap out every few hours (and with a dummy overnight) in order to comply with Oregon’s child labor laws. As the show progresses, and Angela falls short in her effort to find a Christian man to join her in the rehearsal as a co-parent, Fielder steps in as Adam’s father — and Angela’s partner in raising their fake little boy.

Their accidental (and ersatz) family is not exactly comedy gold. Tensions over child rearing come to a head after Fielder’s real-life parents visit from Vancouver, where he grew up and attended Jewish day school. At a pandemic-era picnic visit, his parents learn that Angela is committed to raising Adam as a Christian. (“I was raised Jewish, and I still do all the holidays and stuff,” Fielder had said. “But because Angela was so passionate about Christianity, I thought I’d be open to trying it her way.”) The audience has known this since the beginning, but Fielder’s mother, Deb, is concerned that Nathan doesn’t have much of a say in how he raises his own fake child, reminding him he has fallen into excessive deference in his past relationships in order to avoid conflict.

So Fielder devises a plan to force a conversation about religion by creating an artificial winter around the house, in the hopes that planning for Christmas will create a natural opening for Hanukkah. In episode 5, Nathan navigates the complexities of an interfaith family. (Photograph courtesy of HBO)

“I am pretty much, like, a ‘no’ on the faith part,” Angela says when Fielder suggests infusing Judaism in Adam’s life. “‘Cause Jesus is the way, the truth and the life.”

What ensues is a mortifying silence in which Fielder attempts to regain his footing with a pivot to movies. But then Angela reveals that Mel Gibson is one of her favorite directors.

Fielder, with food in his mouth, awkwardly points out, “He’s a little, um — I think he just says, like, bad stuff about Jews.” (Gibson’s checkered record includes a history of antisemitism.)

Angela’s face falls a little bit, but she doesn’t say anything beyond “hmm.”

Realizing that he will never get Angela’s approval to raise Adam with Judaism, Fielder decides to take control of Adam’s Jewish identity on his own.

The dynamic depicted in the show may not be a perfect example of a real-life situation, given the HBO budget and fake child, but Keren McGinity, the interfaith specialist for the Conservative movement of Judaism and a professor at Brandeis University, says it does touch on one important principle her research into interfaith families has shown: “It only takes one Jewish parent to raise a Jewish child.”

In fact, the 2020 Pew survey of American Jews found that most children of intermarried couples are being raised Jewish — an effort that requires cooperation by the non-Jewish parent. 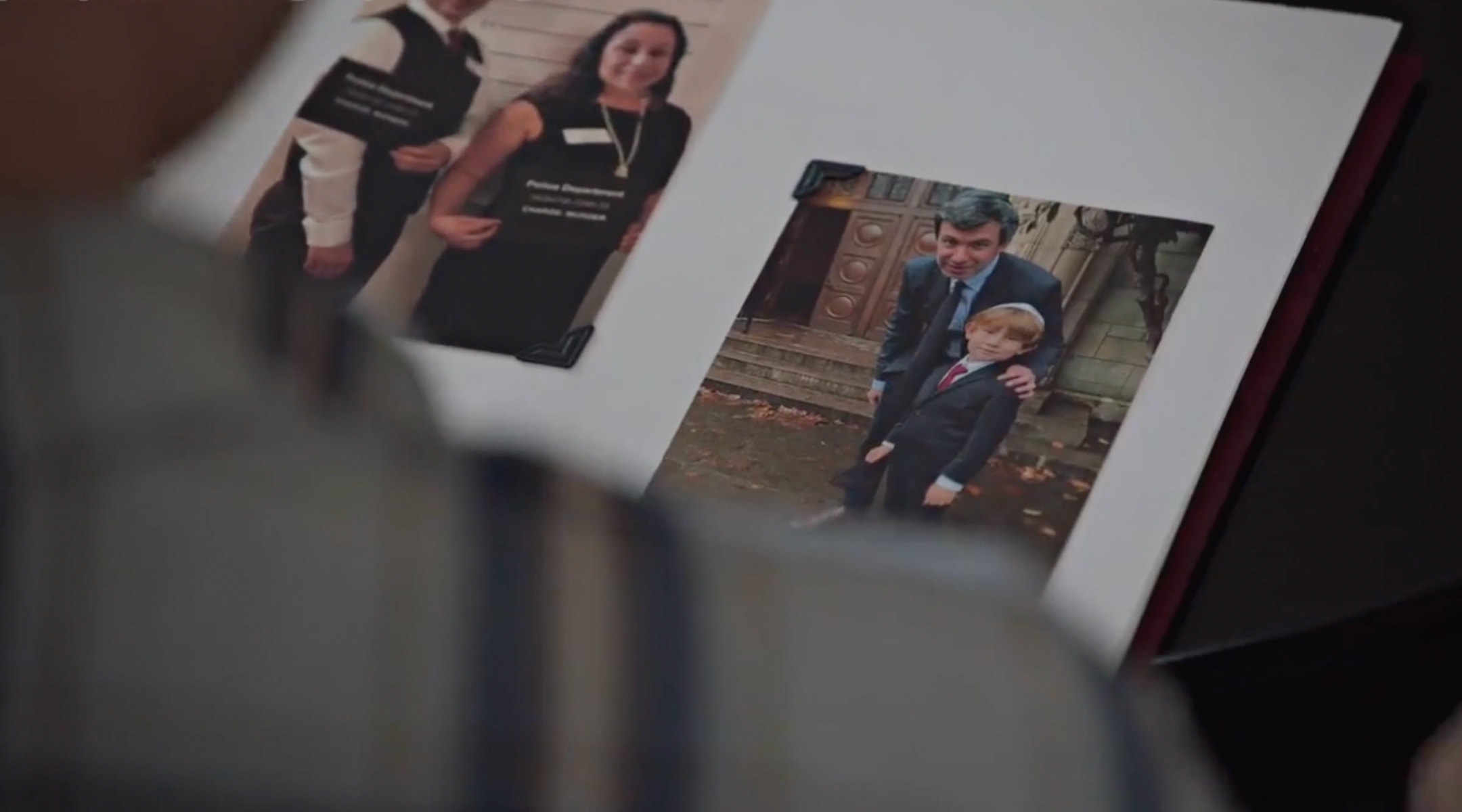 Nathan turns the pages of a photo album, reflecting on the Jewish father he is learning to become. (Screenshot)

Having determined that Angela won’t offer that cooperation, Fielder instead clandestinely takes Adam to a Reform synagogue in Portland, Oregon, Congregation Beth Israel, under the guise of heading to swimming lessons. (The service appears to be poorly attended, perhaps because it was filmed on a Thursday.) Fielder explains to his son that the kippah is a special hat for Jewish boys, but he soon realizes he doesn’t quite know enough to teach Adam everything about Judaism by himself. He finds and hires a tutor to give Adam lessons — also in secret.

It wasn’t the typical dynamic that the tutor, a real-life cantor named Miriam Eskenasy, told the Jewish Telegraphic Agency that she experiences in her work with interfaith families. In at least half of the families she works with, one parent is not Jewish, she said — a statistic that mirrors reality for non-Orthodox Jews in America.

“They have a much less complicated view of Judaism,” Eskenasy told JTA about the non-Jewish parents she works with. “We, as Jews, I think, have a very complex relationship with our religion.”

McGinity, who has not seen “The Rehearsal,” said she was excited to see a portrayal of interfaith Jewish households showing a man being an involved Jewish father.

“I’m getting goosebumps because something I’ve been talking about now for a while is the need to bring Jewish egalitarianism from the bimah [synagogue stage] into the family room,” McGinity said.

But Fielder doesn’t offer an inspiring example. Adam’s lessons with Miriam kick off an elaborate web of lies in which Fielder trains Adam to recite factoids about the nonexistent lifeguard from his nonexistent swimming lessons to throw Angela off the scent of his Jewish studies.

Fielder makes a self-conscious connection between his Jewish parenting and episodes of antisemitism in Jewish history. In one scene, he tells Angela that he and Adam are going to collect eggs from the chicken coop, then takes his son into the basement to teach Adam about Hanukkah.

“Under King Antiochus, many Jews were afraid for their lives,” Fielder reads to Adam. “So they were forced to follow the king’s orders. This group was called the Maccabees.”

It’s impossible not to see the lesson as a contemporary reenactment of that story, in which the Maccabees maintain their Judaism in hiding from the Greeks in the second century BCE. And to a knowledgeable viewer, the insinuation is that Angela, in her inability to compromise on religious practice, is King Antiochus, whose attempt to Hellenize the Jews failed due to the successful revolt led by Judah Maccabee.

There’s another Jewish story that Fielder’s rehearsal echoes — one to which the season’s intricate set offers a blink-and-you’ll-miss-it clue.

Since the second episode, in wide shots of the living room there’s been one quote in the foreground in the Live, Laugh, Love aesthetic that reads, “Perhaps this is the moment for which you were created.” That comes from a Christian version of the Book of Esther — the same one Jews read on Purim — as Mordecai tells his niece Queen Esther she must stand up for the Jewish people in the face of the looming threat from the story’s antagonist, the court official Haman who is seeking to destroy the Jews of Persia.

Like Queen Esther, Fielder has been pretending to be someone he wasn’t in order to avoid conflict, just as his mother said he tends to do. But now the time has come to take charge of his own life and that of his fake son. 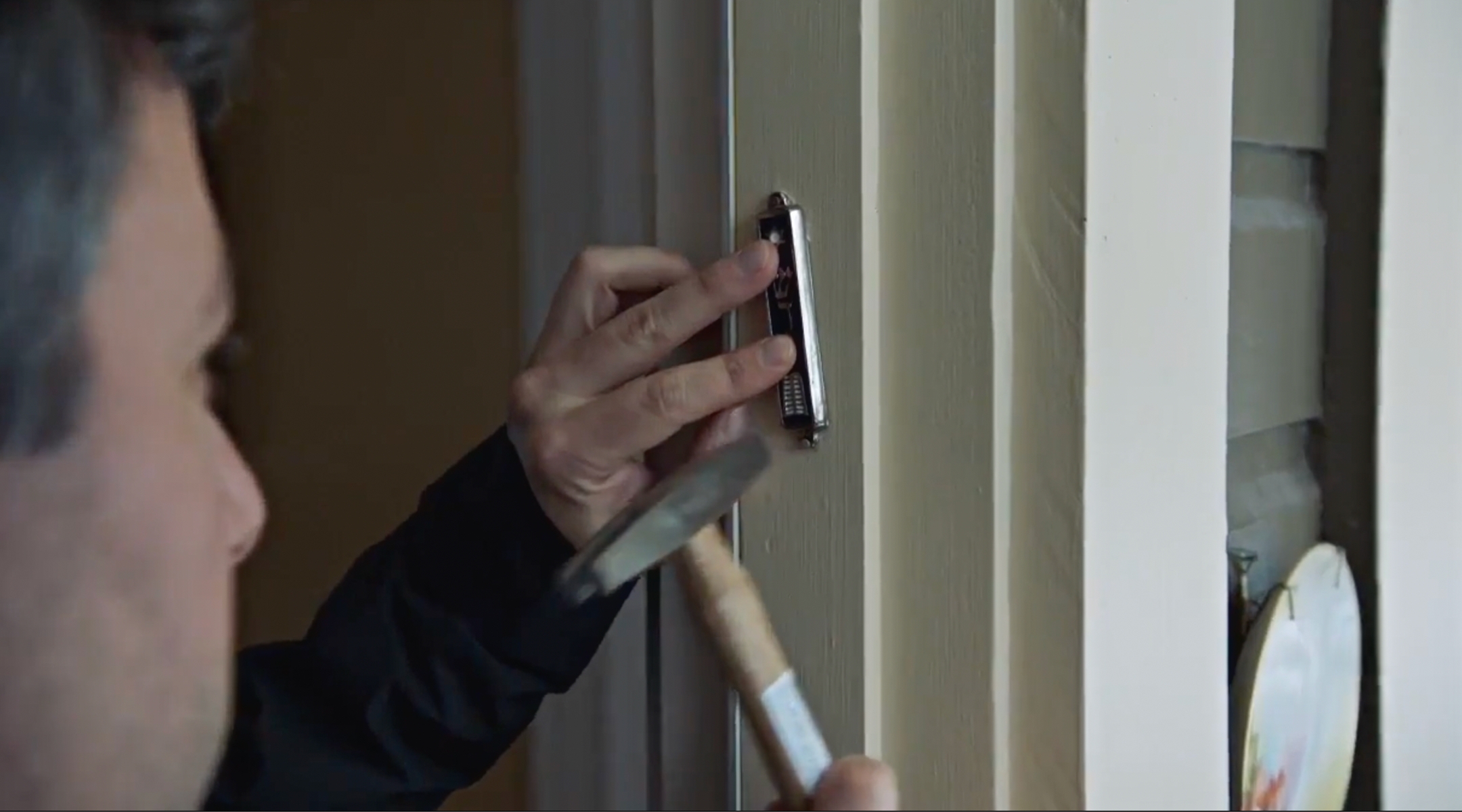 Nathan hangs up a mezuzah on the outside of the rehearsal house. (Screenshot)

After watching Miriam teach Adam about Judaism and taking home some lessons of his own, Fielder dramatically throws out the Christmas tree he and Angela had put up and removes all of the Christmas decorations from the house — with Adam’s help — replacing them with Hanukkah-themed decor. As Fielder hangs up his new mezuzah, he is physically staking a claim to the idea that his home is a Jewish one.

“It was time to stand up for my own values and the values of those who came before me,” Nathan says in his deadpan voiceover. “We don’t always get to choose what happens in life, but we do get to decide if we rehearse for it.”