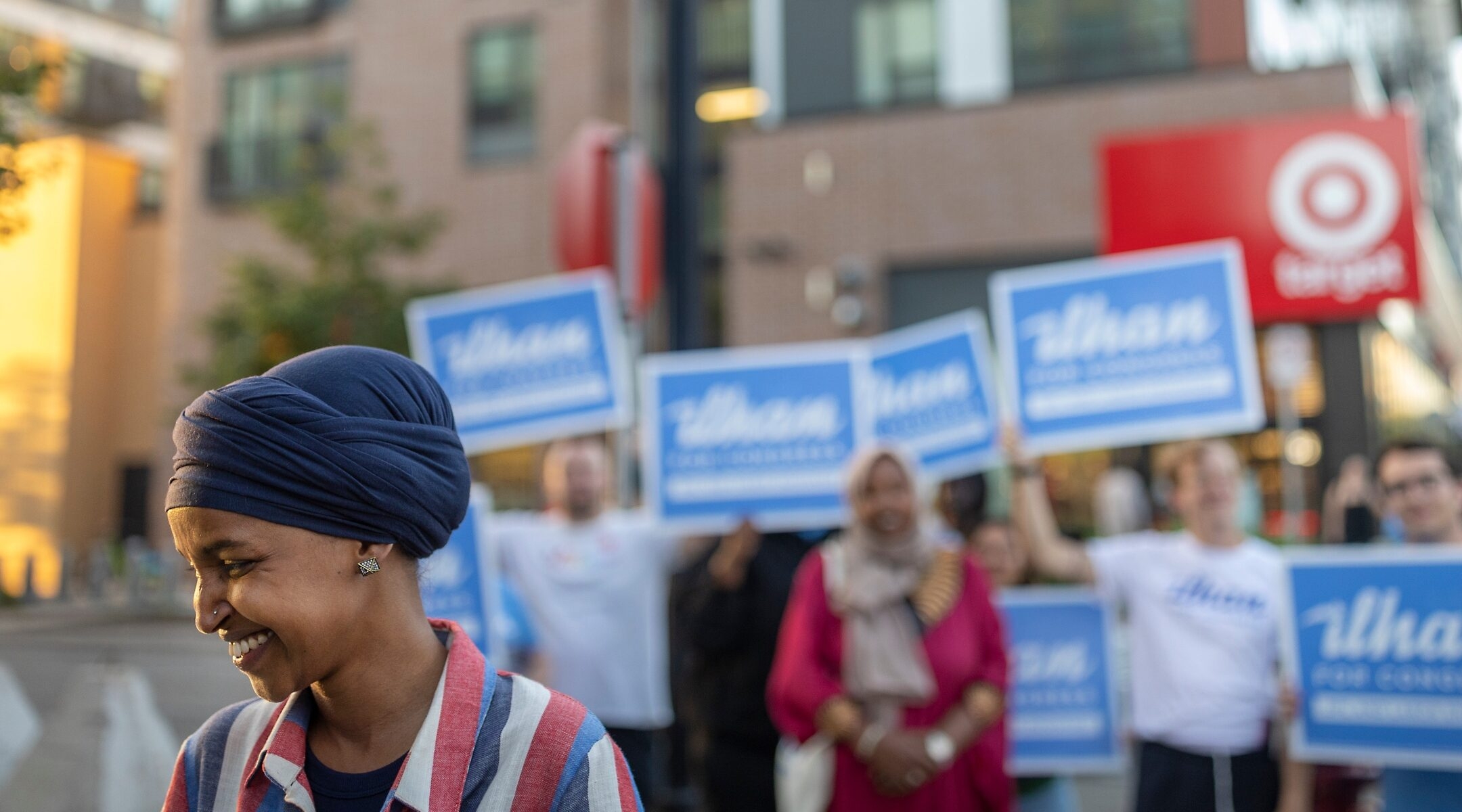 Rep. Ilhan Omar gives a press conference during a voter engagement event near the the University of Minnesota campus in Minneapolis, Aug. 9, 2022. (Elizabeth Flores/Star Tribune Via Getty Images)
Advertisement

WASHINGTON (JTA) — The theory has preoccupied antisemites and pro-Israel strategists alike: If an anti-Israel political candidate loses, it’s because of pro-Israel money.

That theory came close to being disproved last week when Rep. Ilhan Omar, perhaps the most prominent Israel-critical member of Congress, nearly lost her reelection bid two years after cruising to victory — but pro-Israel donors didn’t play a role. It faces another test next week in a New York primary where a member of the Israel-critical “Squad” of progressives who was narrowly elected two years ago, Jamaal Bowman, is defending his incumbency — and where pro-Israel donors again have so far steered clear.

The lack of spending is especially noticeable in a year when the American Israel Public Affairs Committee has made national headlines for lavishing for the first time in its history tens of millions of dollars on congressional races.

AIPAC officials haven’t said whether they considered entering the Omar race or what they plan to do in Bowman’s. And it’s possible that outsized spending by pro-Israel groups would have benefited Omar, not hurt her: After all, her margin of victory was far wider in 2020, when Israel donors spent big to oppose her — and possibly increased turnout by Omar’s supporters as a result.

Still, the dynamics this year are notable for challenging a number of assumptions about the role of money in politics.

One is the incumbent rule, a longstanding orthodoxy of pro-Israel giving, which posits that sitting lawmakers are too firmly entrenched to merit the expense. Even as AIPAC’s super PAC, United Democracy Project, doled out $25 million on behalf of candidates in other races, making it the biggest spender of any nonpartisan PAC, AIPAC’s other PAC and their allies all bypassed Omar’s race, in part because they have forsworn taking on incumbents.

Don Samuels, whom Omar barely defeated, told Jewish Insider that AIPAC’s adherence to the rule was too inflexible. AIPAC should have understood “that there are different kinds of candidates, and that my potential for beating Ilhan was very high,” he said.

The other assumption being tested is the power of pro-Israel political giving. Omar’s struggle to pull out a win undercuts arguments that the main thing keeping Israel-critical politicians from winning elections is pro-Israel money.

Minnesotans had known for weeks that Omar was vulnerable, say insiders in the state; she brought in heavy hitters to campaign for her, including other members of the Squad, the headline-grabbing grouping of progressives she belongs to, belying her claims that she would easily skate in. Sources close to Samuels said his campaign was puzzled that pro-Israel groups were not taking a greater interest.

Jacob Frey, Minneapolis’ Jewish mayor, said in a postmortem that Omar’s siding with those who would reallocate funds from the police in a city suffering rising crime made her ripe for the picking. “This is the person that literally called out for and said to defund the police,” Frey told Fox 9, a local TV news outlet. (Frey backed Samuels, and they shared campaign staff.)

Frey also faulted Omar for being overly combative. “It’s not just about sending out vitriolic tweets and being mean-spirited, it’s about working with people,” he said.

The Minnesota squeaker also comes hard on the heels of Michigan’s primaries, when AIPAC spent millions to defeat Democratic Rep. Andy Levin, a Jewish self-described Zionist who is nonetheless critical of Israel. (The race was a rare instance of AIPAC opposing an incumbent, but this was because of redistricting: AIPAC backed another incumbent, Haley Stevens.) In one week, AIPAC’s opponents were handed a tidy critique of the group’s approach: AIPAC spent millions of dollars to defeat Jewish royalty, but not a dime to unseat Omar.

In a rare interview, AIPAC’s CEO, Howard Kohr, told The Washington Post that Levin’s Jewishness was not germane. “As we commonly say around here, not everyone who is pro-Israel is Jewish,” Kohr said. “It’s also the case that not everyone who is Jewish is pro-Israel. That has nothing to do with religion, race, ethnicity, party affiliation, etc. It has to do with an orientation. If you wake up every morning finding ways to consistently criticize only Israel, that sends a message.”

But what may be most noteworthy about the Omar primary election and its fallout is how new it is not: Dig a little into the poor performance of most any Israel-critical candidate, and one finds a lot more going on than Middle East policy.

For much of the 1980s and 1990s, AIPAC ran on the reputation that it had ousted Israel’s two most outspoken critics in Congress, Illinois Republicans Rep. Paul Findley in 1982 and Sen. Charles Percy in 1984. Findley wrote a book about it, “They Dare to Speak Out,” depicting the pro-Israel lobby as a gorgon that none but the brave would take on.

AIPAC insiders at the time were happy with the reputation but privately admitted that both lawmakers did more to defeat themselves than any opponent, including the pro-Israel lobby.

Findley, defeated by Dick Durbin, was a Republican moderate who was no longer able to stir the increasingly conservative passions of the GOP base, which affected voter turnout. Reviewing “They Dare to Speak Out” when it came out in 1985, The New York Times called the book “the typical reaction of a Congressman who is offended at being challenged seriously for ‘his’ seat, especially if the upstart should go so far as to beat him.” Percy, preoccupied with foreign policy, was seen as neglecting Illiinois’ bread-and-butter issues, which contributed to Paul Simon’s win.

Perhaps the most apt analog to Omar’s tight race is the 2006 election that removed from Congress one of Israel’s most trenchant critics in that decade, Georgia Democratic Rep. Cynthia McKinney.

McKinney, first elected in 1992, had been ousted in 2002. Pro-Israel donors had played a role in that race, and her father, a state lawmaker, blamed her loss on “J-E-W-S,” which stirred concerns in the pro-Israel community that they had played too prominent a role and were providing antisemites with a target.

McKinney retook her seat in 2004, and pro-Israel donors stayed out of the race in 2006, at first, for a number of reasons: McKinney, having bounced back, now seemed unbeatable. Also, the perception advanced by McKinney, her father and others that Jews were targeting a Black congresswoman inhibited involvement.

That changed when one of several opponents in the primary, Hank Johnson, performed exceptionally well, and he and McKinney went to a runoff. Pro-Israel donors leaped in at that point and helped Johnson win. McKinney has not returned to Congress since.

There are differences between 2006 and last week: For one thing, Omar won, even if it was close. Plus, Georgia’s runoff system, which allowed the pro-Israel community to step in on Johnson’s behalf at the last minute, does not exist in Minnesota.

Like Omar, McKinney was a lightning rod who made as many enemies as friends, although McKinney stands out for the depth of her commitment to marginal ideas and confrontational actions. She once punched a Capitol police officer and entertained inside-job conspiracy theories about the 9/11 attacks. By 2006, her constituents had many reasons to want her gone from Congress.

Like the pro-Israel donors who were spooked by McKinney’s 2004 win, pro-Israel donors were wary of another confrontation with Omar, who won by a large margin in the 2020 primaries, despite big pro-Israel money. Pro-Israel insiders have said donors did not want to be once again exposed to the humiliation of a defeat, and at the hands of one of Israel’s most prominent critics.

That creates a paradox: Shout out loud that you’re critical of Israel, and AIPAC might be more reluctant to come for you. The AIPAC PACs, including the United Democracy Project super PAC, have not targeted prominent Israel critics. Instead, they have focused on politicians who have barely registered on the Israel issue, such as Summer Lee in the Pittsburgh area (who won, narrowly) and Jessica Cisneros in south Texas (who barely lost).

Another Squad member, New York’s Jamaal Bowman, may face a tough race in an Aug. 23 primary. Redistricting has cut the number of Black and low-income residents in his 16th District and added a substantial Jewish population center in White Plains, potentially making it more of a challenge for Bowman. He faces two moderate Democrats, one of whom, Vedat Gashi, has earned the endorsements of two of Congress’ more prominent former pro-Israel Jewish Democrats: Eliot Engel, who Bowman ousted two years ago, and Nita Lowey, who retired in 2020.

So are the AIPAC PACs reconsidering the incumbent rule? If so, it would present a dilemma: Ilhan Omar, version 2020, or version 2022: Jump in and risk the humiliation of Bowman soundly defeating the AIPAC endorsee, and of drawing national attention to one of Israel’s sharpest critics; or stay out, and risk being seen as overly cautious if Bowman barely squeaks in.

AIPAC’s spokesman Marshall Wittman adopted a wait-and-see posture. “We will continue to review races and opportunities throughout the remainder of the cycle,” he said.