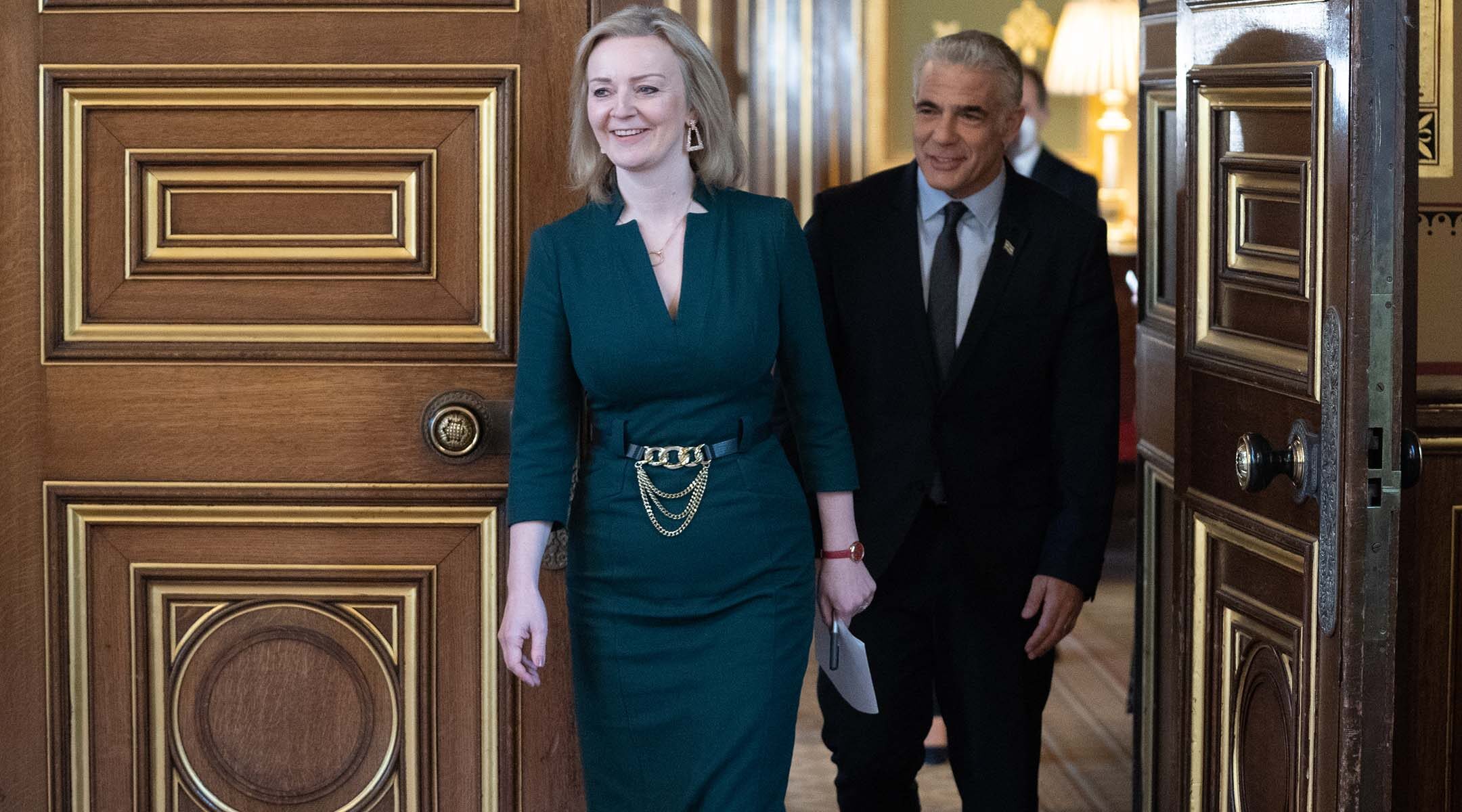 (JTA) – Britain’s new prime minister says she has a lot of Jewish friends — and that she will be a friend to her country’s Jews and to Israel.

Liz Truss replaced Boris Johnson as the prime minister of the United Kingdom Tuesday following a reshuffle in their Conservative Party. A liberal turned right-winger who at 46 is one of the youngest people to ever hold the post, Truss cited a Jewish boss as an inspiration and vowed to fight antisemitism in an interview with the Jewish Chronicle of London.

The United Kingdom’s decision not to back a 2017 international statement in support of a two-state solution in Israel was a watershed moment in the country’s Israel policy — part of a rightward shift after Johnson’s predecessor, Teresa May, assumed power. Previously, the U.K. had typically voted with other European countries to back policies and statements that were more critical of Israel.

Truss says she is committed to the Conservative Party’s outlook on Israel, saying, “There is no greater friend to the UK than Israel.” On the campaign trail, she even suggested that she would be open to moving the embassy from Tel Aviv to Jerusalem, as the United States did under President Donald Trump.

Like Johnson, who has used friendly language in relations to Jews and Israel and whose maternal great-grandfather was a Moscow-born Jew, Truss too says she has positive associations with Jews.

“I had lots of Jewish friends at school,” Truss, who was president of the Oxford University Liberal Democrats, the left-leaning party that is popular among London Jews, told the Chronicle last month in an interview published Monday. “One of my close friends eventually moved to Tel Aviv, actually. I saw him quite recently when I was on an official visit – I met up with him and he’s now a patent agent in Tel Aviv,” she said.

At Shell, an oil company where Truss began her career as an accountant, she worked under an Orthodox Jew, she told the Chronicle. He was “the best boss I ever had and a very big influence on me,” she added.

“I remember that at work it was great during the winter because he would leave early for Shabbat every Friday. In the summer he was there until much later,” Truss went on. “That was one of my first experiences seeing how Jewish life could be incorporated into corporate life and it really impressed me how proud he was of his religion.”

Later in life, she said, she realized she had seen her boss modeling values held by her Conservative political party. “So many Jewish values are Conservative values and British values too, for example seeing the importance of family and always taking steps to protect the family unit and the value of hard work and self-starting and setting up your own business,” she told the Chronicle. “The British Jewish community is incredibly proud of this country and so are Conservatives.”

A hardline promoter of the United Kingdom’s ongoing disengagement from the European Union following the 2020 Brexit, Truss is likely to continue Johnson’s policies on immigration and the economy, which is in crisis in part because of double digit inflation rates.

Responding to a Jewish Chronicle survey showing a sharp rise in antisemitic incidents in British schools, Truss, who was born in Oxford to a university professor and a nurse, said, “I want to see the scourge of antisemitism eradicated. That means driving it out from our culture, starting with the schools.”

And on Iran, she said that it “cannot allow Iran to gain a nuclear weapon.” The U.K. is still party to the Iran nuclear deal, which is currently being renegotiated.

As foreign secretary, Truss, a mother of two who was first elected to parliament in 2010, challenged the singling out of Israel at the United Nations, according to Stephen Pollard, a former editor-in-chief of the Chronicle who interviewed Truss for Monday’s article.

Truss’ claim to have taken a “strong stand in tackling antisemitism at the international level,” he wrote, “stands up.” At the United Nations Human Rights Council, she ensured that Britain “voted with Israel,” Pollard wrote, in keeping with the country’s shift under May and her successor, Johnson, from long-held voting patterns on Israel. She even clashed with foreign service officials to do so, she told Pollard.

“Bodies like the Human Rights Council,” Truss told Pollard, “have been used to peddle a particular agenda which frankly have strong elements of antisemitism.”